A much-hyped musical -- maybe you've noticed the promos -- pays off big, even for non-theater fans 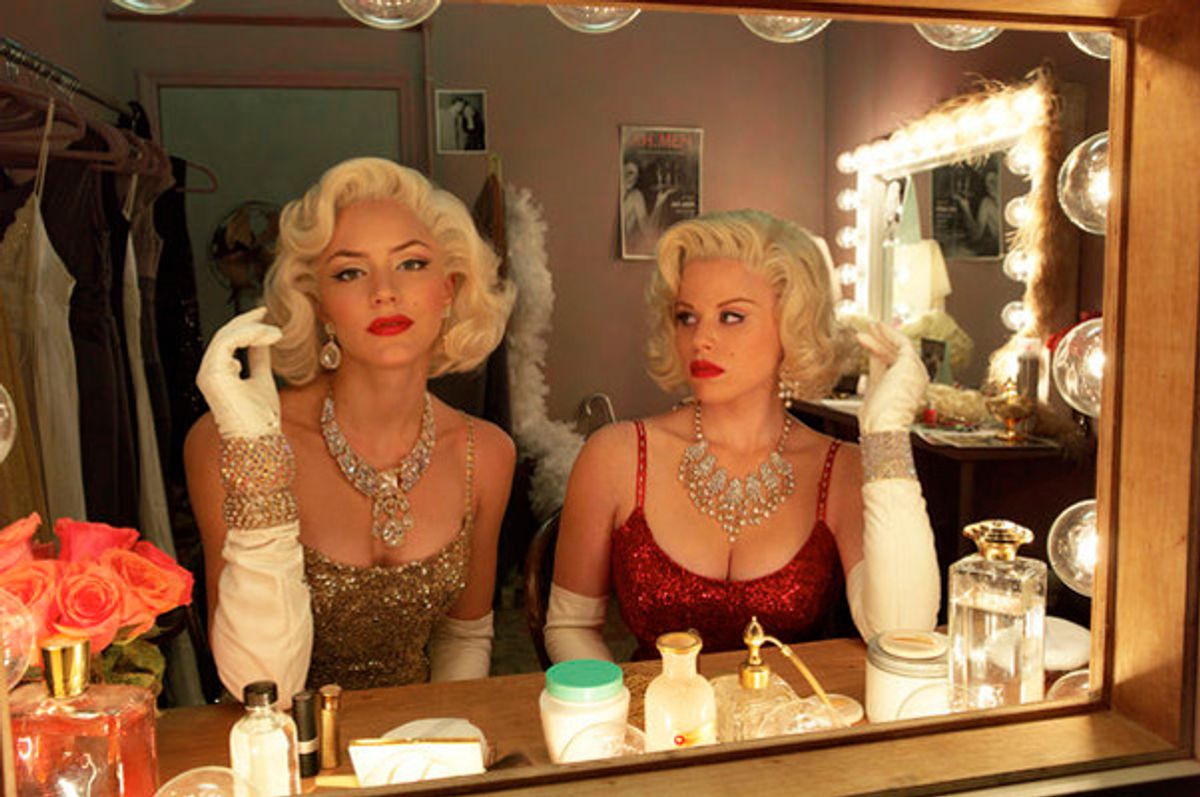 I’m a bad gay. I don’t like musicals. I am not a “Gleek” (though I am awestruck by "Glee’s" bold portraits of gay adolescent life  — I’d have given anything to watch a show like that when I was 15). I have trouble suspending disbelief when people spontaneously break into song; I get squirmy and my eyes dart around as if the singer is prancing naked in front of me, and I’m trying to give her privacy, whether or not she wants it.

So I am not exactly the ideal audience for "Smash," the new series NBC has been promoting like crazy (the pilot is already posted on Hulu), by playwright Theresa Rebeck ("The Understudy," "Seminar"), about the making of a Broadway musical about Marilyn Monroe. (That's this season. If the show gets renewed, we will watch another musical develop throughout the next season — a sort of musical-theater procedural. "Law & Order: The Musical!") The pilot opens with "American Idol" runner-up Katharine McPhee belting “Somewhere Over the Rainbow,” daydreaming of her Broadway debut while auditioning before an underwhelmed director: For a curmudgeon like me, that has skin-crawl written all over it. Except that I was absolutely, instantly bewitched. By the writing. By the acting. By the story and the stories within the story. Even by — especially by — the music. That credit goes to the Tony-winning team Marc Shaiman and Scott Wittman ("Hairspray"), who wrote more than a dozen original songs for the series, classically great musical-theater numbers that recall Jule Styne, even a little early Sondheim, and are performed only by those striving to be on the stage (no, Debra Messing will not break into song, nor will Anjelica Huston) — at auditions, or practiced at home, or in fantasy sequences — with lyrics that masterfully mirror both the theatrics of musical in progress and the goings-on of the actors’ lives.

A show about theater demands as much drama behind the scenes as on the stage, and "Smash" won’t disappoint: There are betrayals, divorces, complicated adoption stories, sordid seductions, dreams fulfilled and quashed. We meet songwriting duo Julia Houston (an understated, lovable Debra Messing) and Tom Levitt (the equally terrific Christian Borle) who’ve been enjoying a successful run on Broadway and London’s West End with their breakout show "Heaven on Earth," and who’ve vowed to take a year-long breather because Julia is pursuing an international adoption. It’s a promise quickly broken when Tom’s ambitious, crush-worthy new assistant, Ellis (Jaime Cepero), suggests the team do a musical about Marilyn Monroe — a concept that has previously failed on the Broadway stage (meta data: In 1983, a Marilyn show with a happy ending was a critical and commercial disaster) despite the subject’s perennial popularity — and it’s a challenge they can’t resist. For Julia, it’s about creating a work that honors a subject who said in an interview before she died “Please don’t make a joke out of me.” Julia says, “There was just something about her, how much she wanted to love and be loved … Reminds me of a saint. I don’t want anyone else to do her.” For Tom, it’s the prospect of writing the baseball number about Joe DiMaggio.

The duo swears they’re going to write just one song. And maybe record that song with an ensemble cast member from "Heaven on Earth," Ivy Lynn (Megan Hilty). Which is fine except that Ellis secretly films it with his phone to share with his mother, who posts it online, and the recording goes viral.  Julia’s husband, Frank (Brian d’Arcy James, a Broadway musical actor in his own right), predicted this would happen — he knows songwriting is Julia’s gateway drug to a full-on production, and that means possibly losing her for at least another year to a show in development, and to her gay partner, Tom, to whom she can seem more closely committed than to him. (Not to worry, this is not a setup for a Grace Adler/Will Truman redux dynamic, or even Grace/Jack McFarland. Julia and Tom are far more realized — neither goofy, nor batty, nor undermining.) Will this adoption be shelved?

Broadway producer Eileen Rand (Anjelica Huston) is eager to get involved with the show-in-progress, now that her pet project  — a revival of "My Fair Lady" — is stuck in escrow, along with her money, due to an acrimonious divorce battle with her rich soon-to-be-ex-husband. She sees in the biographical musical an opportunity to assert her independence in the theater world. But she needs to lure away some of the talent he’s locked into place, in particular, the "My Fair Lady" director, Derek Wills (Jack Davenport), a pompous, indisputably talented English lothario — he reads like a Broadway Simon Cowell, an incongruous misstep that I can only hope was the result of network notes — who hates Tom (the feeling is mutual), and who believes Marilyn’s bleak track record speaks for itself and wants to stick with the original plan.  But “Marilyn Monroe,” Eileen argues, “is an American Eliza Doolittle.”

This "My Fair Lady" trope carries through at least the first two episodes: Is Marilyn an American Eliza Doolittle, and do the creators want to take one on and mold her into a Marilyn? Indeed the Marilyn project is a very clever entrée into the insular realm of Broadway musical theater, allowing us to see the subject’s biography bisected, and follow her evolution from Norma Jean to Marilyn Monroe, not only through the musical itself, presumably, but through the experiences of the two hungry actresses vying for the title role. With her blond hair and hourglass figure, and a vague air of tragedy with her perpetual singledom and hardworking background, veteran ensemble actress Ivy Lynn appears a no-brainer for the iconic Marilyn and she is desperate to lead a production (and is played to perfection by seasoned Broadway actress Hilty — also in need of a breakout role). Karen Cartwright (McPhee), the other actress in contention, is a very green Midwestern brunette beauty with an incredible voice (and the only person at the open audition not dressed as Marilyn — she sings Christina Aguilera’s “Beautiful,” seeking to evoke her romantic innocence). She's the Norma Jean. Or, if you will, Eliza D. Unlike Ivy Lynn, Karen has a boyfriend, Dev (Raza Jaffrey, who last starred as a cuckolded husband in the English answer to "Sex and the City," a deliciously overwrought BBC series called "Mistresses"), as well as well-intentioned provincial parents (real-life couple Becky Ann Baker, Lindsay and Sam Weir’s mother from "Freaks and Geeks," and Dylan Baker, perhaps best known as the pedophile in "Happiness"), as a safety net — Dev encourages her to follow her dreams; her parents gently suggest she shelve them.

The project, even as a work in progress, demands a charismatic star. Tom and Julia have been workshopping the songs with Ivy, who they feel is perfect for the part, and they want to reward her. But with Derek and Eileen on board, they are forced to open the door to other Marilyn options, which is why they’re faced with the unanticipated quandary: Do they want a ready-made Marilyn, who they know can do it, or accept the challenge of a Pygmalion-Marilyn story within a Pygmalion-Marilyn musical? That’s the pilot cliffhanger, presented with a goosebump-inducing closing number, “Let Me Be Your Star,” a cross-edit duet between Karen and Ivy Lynn, as they prepare for the final callback, tracking them from their respective apartments to the their face-off, each singing the story of her plight, until their voices, naive and knowing, yet equally exhilarated and earnest and fervent, converge in a fever pitch: “And what you’ve been needing/Is all here and my heart’s bleeding/Let me be your star!” I guarantee you’ll be genuinely torn.