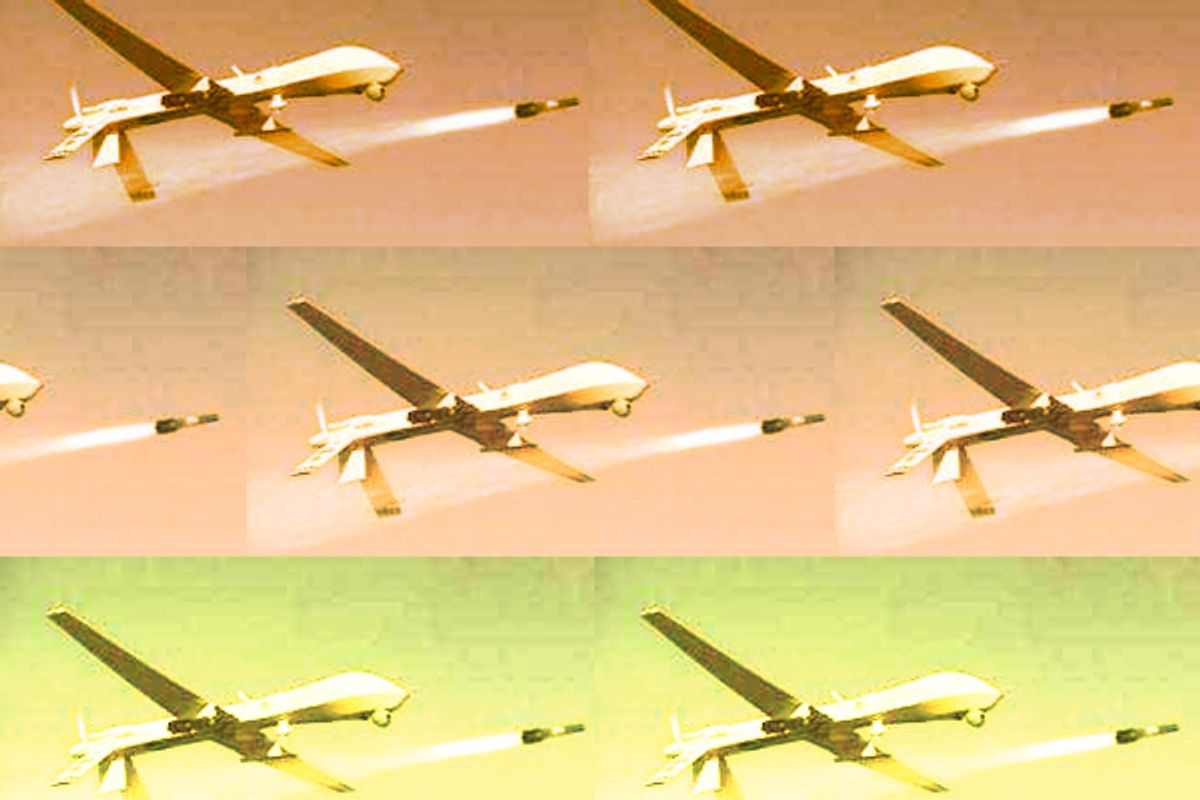 The New York Times' Scott Shane reported this morning on the Bureau of Investigative Journalism study I wrote about yesterday, detailing that the U.S. drone program, as the NYT put it, "repeatedly targeted rescuers who responded to the scene of a strike, as well as mourners at subsequent funerals." Shane's article contains this paragraph:

A senior American counterterrorism official, speaking on the condition of anonymity, questioned the report’s findings, saying “targeting decisions are the product of intensive intelligence collection and observation.” The official added: “One must wonder why an effort that has so carefully gone after terrorists who plot to kill civilians has been subjected to so much misinformation. Let’s be under no illusions — there are a number of elements who would like nothing more than to malign these efforts and help Al Qaeda succeed.”

Note that the "senior counterrorism official" did not deny the findings, at least not in the quotes provided, but there are two lessons to take from this paragraph. First, at least according to some "senior" Obama official, those who report critically on the civilian-killing, rescuer-and-funeral-targeting American drone attacks (i.e., those who "malign these efforts") are either supporters of or useful idiots for Al Qaeda; it sure is a good thing the Bush era is over when those who questioned the President's national security policies were accused of helping the Terrorists. Second, if you're a cowardly senior government official who wants to smear critics as Al Qaeda enablers or supporters, The New York Times will grant you anonymity to do it, all while violating multiple provisions of its own policy on anonymity adopted after its historically shameful performance in the run-up to the Iraq War:

The use of unidentified sources is reserved for situations in which the newspaper could not otherwise print information it considers reliable and newsworthy.

We do not grant anonymity to people who are engaged in speculation, unless the very act of speculating is newsworthy and can be clearly labeled for what it is. . . .

We do not grant anonymity to people who use it as cover for a personal or partisan attack. If pejorative opinions are worth reporting and cannot be specifically attributed, they may be paraphrased or described after thorough discussion between writer and editor.  The vivid language of direct quotation confers an unfair advantage on a speaker or writer who hides behind the newspaper, and turns of phrase are valueless to a reader who cannot assess the source. . . .

We should avoid automatic references to sources who "insisted on anonymity" or "demanded anonymity"; rote phrases offer the reader no help and make our decisions appear automatic.

The Bureau's journalists and researchers spent months engaged in the painstaking and difficult task of gathering documentation on the effects of the top secret U.S. drone program in Waziristan -- producing extraordinary findings -- only to find themselves and their sources, many of whom are local villagers whose children have been killed, depicted as Al Qaeda's witting or unwitting allies the very next day in The New York Times, by some senior government official too frightened to put his name on his accusations and aided (as always) by a newspaper that has repeatedly vowed to stop these practices.

UPDATE: The Bureau of Investigative Journalism's Chris Woods was on Democracy Now this morning talking about this new report, and said this when asked by Amy Goodman about the quote from the anonymous Obama official:

I think, obviously, that is a disgraceful comment from an unnamed U.S. official. We’ve presented our findings in good faith. It’s all available on TBIJ’s website. Our data is transparent. We have linked to all of our sources. Our field investigators have put up their findings. We have eyewitness testimonies. We have a supported interview with the national security correspondent of the Washington Post confirming that his U.S. intelligence sources confirmed to him that CIA drones willingly and predictably carried out an attack on a funeral in Pakistan deliberately targeting people there. If the CIA’s response—or rather, unnamed security official’s response—to that is simply to accuse us of aiding al-Qaeda, then something is going significantly wrong at the CIA and in the wider U.S. intelligence community.

That's all true, but not particularly surprising coming from people who deliberately target rescuers and funeral attendees with drone strikes.