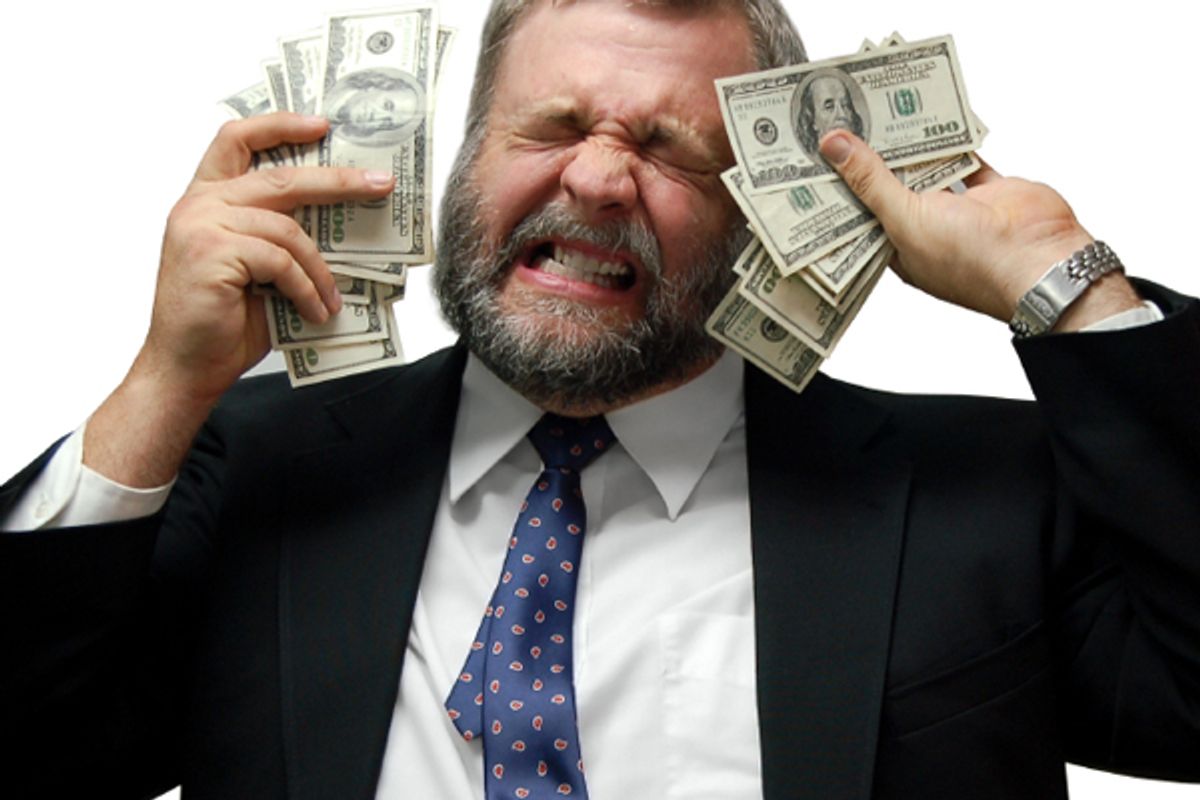 There are at least three different ways to read Gabriel Sherman's fascinating and provocative report on Wall Street's incredible shrinking profits in New York magazine, "Is This the End of Wall Street as They Knew It."

1) As a vehicle for excessive schadenfreude indulgement.

Sherman's piece is loaded with quotes from bankers bemoaning their changed circumstances. A prime example comes from a banker mulling the news that Morgan Stanley is capping annual bonus payments at $125,000.

For New York’s bankers and traders, the new math suddenly reordered their assumptions about their place in a post-crash city. “After tax, that’s like, what, $75,000?” an investment banker at a rival firm said as he contemplated Morgan Stanley’s decision. He ran the numbers, modeling the implications. “I’m not married and I take the subway and I watch what I spend very carefully. But my girlfriend likes to eat good food. It all adds up really quick. A taxi here, another taxi there. I just bought an apartment, so now I have a big old mortgage bill.”

And there's more where that came from! Banking analyst Dick Bove complains that the government has "basically castrated these companies." Sorry, Dick, but it couldn't have happened to a more deserving bunch of testosterone-crazed bulls in the entire global economy pasture. Hard times for investment bankers? It's hard to imagine anything in the world that the average American could care less about, at this particular juncture in time.

2) As proof, amazing as it may seem, that the Dodd-Frank bank reform law is achieving exactly what the U.S. economy needs most: a reversal of the long-term trend in which the financial sector steadily gobbled up more and more of the U.S. economy.

Sherman makes a persuasive case that, even before the full implementation of Dodd-Frank, in anticipation of the new rules the big banks have been forced to make major changes to their businesses that have had a serious negative impact on their bottom line.

What is even more startling about this reversal is that few thought the much-vilified Dodd-Frank act would have much effect at all ... And yet, from the moment Dodd-Frank passed, the banks’ financial results have tended to slide downward, in significant part because of measures taken in anticipation of its future effect. Since July 2010, Bank of America nosed down 42 percent, Morgan Stanley fell 25 percent, Goldman fell 21 percent, and Citigroup fell 16 — in a period when the Dow rose 25 percent. Partly, this is a function of the economic headwinds. But the bill’s major provisions — forcing banks to reduce leverage, imposing a ban on proprietary trading, making derivatives markets more transparent, and ending abusive debit-card practices — have taken a pickax to the Wall Street business model

If true, this is great news. In 1986, Wall Street accounted for 19 percent of all U.S. corporate profits. Just before the financial crash that figure had grown to 41 percent. That's not a healthy economy. That's an economy of speculators trading with each other and blowing up financial bubbles. Obama has gotten no end of grief from the left for not breaking up the big banks immediately after becoming president, even though one could make a good argument that to do so in the middle of the crisis would have damaged the U.S. economy even further. If, in fact, the long-run resolution of this drama is a Wall Street that is withering on the vine, while the "real" "Main Street" economy gradually strengthens, then we are looking at something remarkable: a profound transformation of the U.S. economy, the likes of which we haven't seen since the Reagan administration.

Of course, Dodd-Frank has not been fully implemented, and financial sector lobbyists are busily exerting tremendous pressure to make sure every new rule gets written so as to have the weakest effect possible. At the same time, Wall Street will pour hundreds of millions of dollars into the campaign of Mitt Romney, who has promised to make rolling back Dodd-Frank one of the primary goals of his presidency. Profits may be bad this year, and bankers might be whining about their bonuses, but Wall Street will regroup, Dodd-Frank will be neutered, and it will be business as usual in just a few years.

Readings 2 and 3 are not necessarily in contradiction with each other. It's possible for Dodd-Frank to already be having a salutary effect and for that effect to be short-lived. In some ways, Dodd-Frank's legacy may be what November's election ends up deciding -- although whichever party wins the White House in 2012, the power of the financial sector over the political process is unlikely to diminish significantly.

But regardless of which reading you choose, the piece itself is amazing if only for the plethora of quotes from bankers lamenting how the times have changed. There's a self-awareness of the fact that the country headed down the wrong road, that maybe, just maybe, there was something wrong with all the easy money. Wall Street sounds chastened. Whether or not the Occupy movement, or Dodd-Frank, or the bad economy is most responsible for this reality is impossible to say, but for now, let's call it progress.