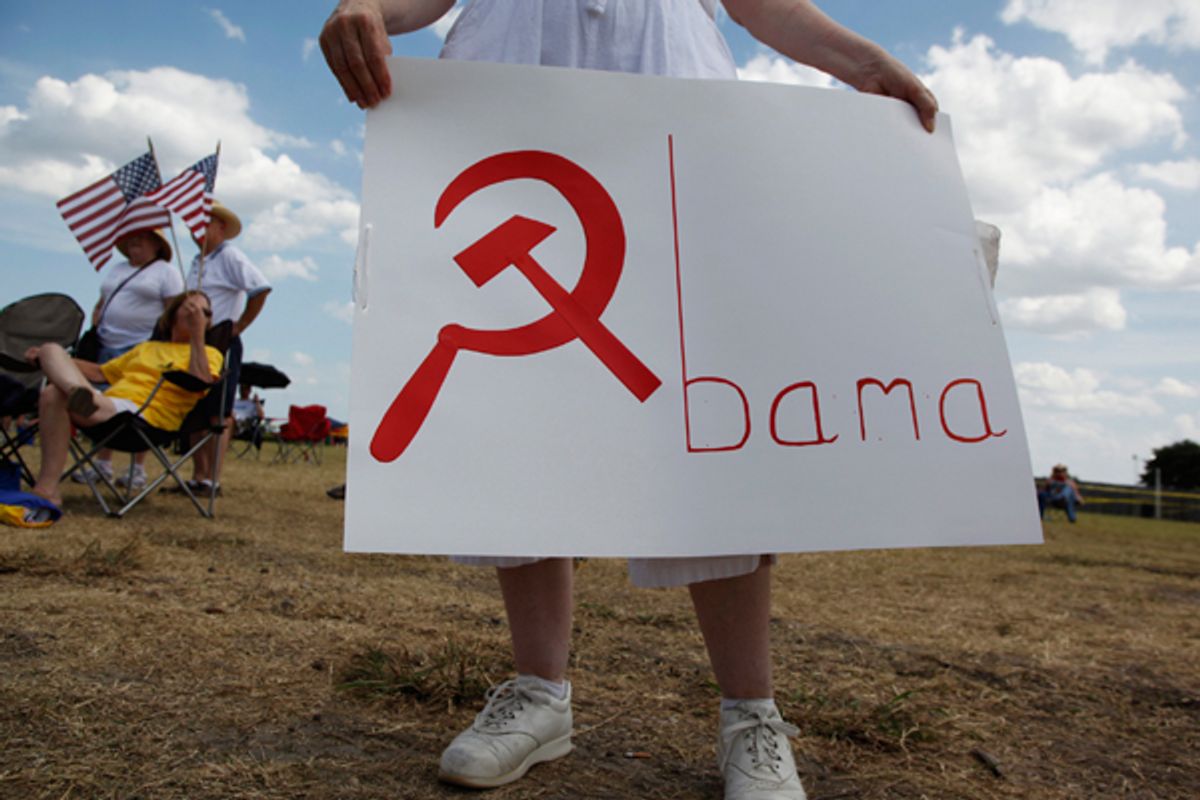 If the contests that have taken place so far are any guide, then Republican turnout in Minnesota, Colorado and Missouri today won't be anything to write home about. It's been one of the most discordant aspects of the 2012 campaign: The first three years of Barack Obama's presidency were marked by an angry awakening of the GOP base, but those same Republican voters seem oddly unexcited about the opportunity to finally select an opponent for the president. Here, courtesy of NBC's First Read, are the turnout figures for the five states that have voted so far:

There are other signs that Republicans aren't as engaged as they were four years ago. An ABC News/Washington Post poll this week found that just 55 percent of GOP voters say that are "certain" to vote when their state's nominating contest is held; at this same point in '08, that number was 68 percent.

On the surface, these sorts of numbers run counter to everything we've been seeing and hearing since January 2009, when conservative activists and voters mobilized a fierce, loud and relentless resistance to Obama's presidency. Surely, the thinking went, they'd throw themselves into the '12 primary race, instead of sleeping through it like they seemed to in '08. Plus, this time around there'd be no Democratic contest to attract eligible non-Republican voters in open primary states; with all of the action on the GOP side, turnout would have to swell, wouldn't it?

Needless to say, there's now plenty of talk about the potential general election implications of this seemingly unmotivated Republican base, and the possibility that the enthusiasm gap that was supposed to harm Democrats could actually work in their favor -- or at least not be much of a factor. And while it's very possible there's something to this talk, I'd offer a different theory: The low turnout figures are actually consistent with what we know about the Obama-era GOP and probably don't portend anything for the fall.

After all, the GOP base's 2009 awakening was primarily a response to the election of a Democratic president. While the term that the right embraced for its resistance (the Tea Party) was new, the phenomenon wasn't; just ask Bill Clinton. But there was a twist this time, with the right deciding that Obama's election was enabled by Bush-era Republican leaders, whose routine sellouts of conservative principles had given the movement a bad name and helped produce the depressing domestic conditions that made victory so easy for Obama. So they launched a two-front war, one against Obama and one against the "establishment"-types who had led the GOP off course. The indispensable ingredient, though, was Obama's election.

In this sense, the low turnout figures could be a reflection of the intraparty war. That Romney is regarded with suspicion by many conservatives is well-established at this point; his Massachusetts record and his strained efforts to present himself as a born-again Reaganite make him seem like the very sort of Republican official the base rebelled against in some high-profile 2010 primaries. Romney has tried hard -- very, very hard -- not to give the right any new ammunition, and he's largely succeeded. But that doesn't mean he's generated any real enthusiasm; his strategy has always been to be the "good enough" candidate -- the one conservatives will eventually accept when they realize he's inevitable and that they have no other options.

And that's the other story of the GOP campaign so far: Conservatives really haven't found any other options. They've flirted with various possibilities, but all of the would-be alternatives have shown themselves to be seriously flawed in one way or another, and none has shown much staying power in the polls.So what's there for the average Tea Party-era Republican to be excited about in the GOP race? As right-wing blogger Erick Erickson put it recently: "Today, after a lot of reflection on this race, I can honestly say my position has not changed and I would honestly prefer Ace of Spades’ sweet meteor of death than any of the candidates left in the race."

But when the primary season finally ends and the Republican Party has a nominee, Republicans like Erickson will be left with a choice: the GOP candidate or four more years of Obama -- the guy whose election made them so furious in the first place and whose presidency they've spent the past few years desperately trying to undermine. And rest assured, the GOP base is as sour on Obama as it's ever been; Gallup's latest weekly tracking poll gives the president a 10 percent approval rating among Republicans and a 6 percent score among conservative Republicans. Even Clinton, a man who inspired so much animosity from Republicans that they impeached him, enjoyed more cross-party support at this point in his presidency. And so did every other president since Ronald Reagan.

There's still nothing quite like the right's Obama-phobia. So while a surprising number of Republicans may be sitting on their hands now, here's guessing they won't be in November.