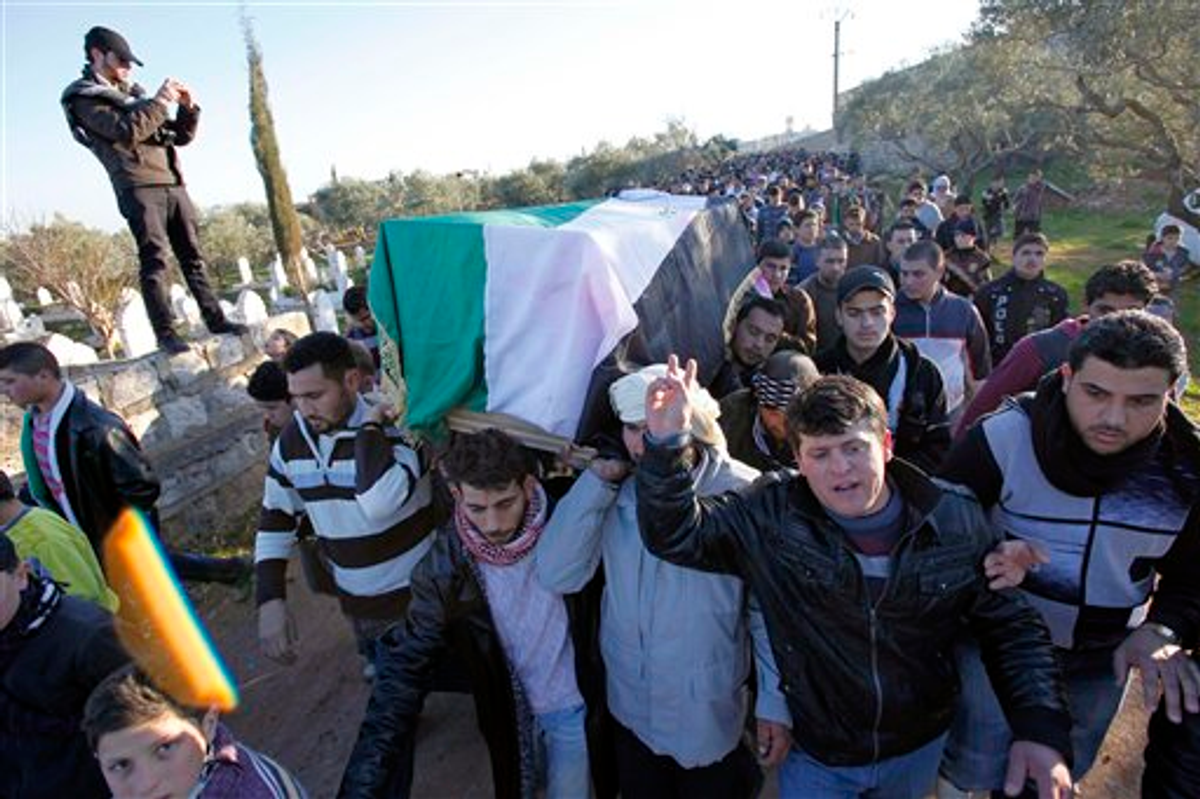 In this Saturday, Feb. 4, 2012 photo anti-government protesters carry the coffin of a slain proteste in Idlib, north Syria (AP)
--

Today, Abu Yaman’s refinery has become a military base, its main pipelines destroyed, state hospitals stormed by secret police, electricity cut and makeshift home clinics overwhelmed with casualties as Homs endures an onslaught of rockets and mortars in the regime’s worst massacre of civilians since the uprising began 11 months ago.

With rights group Avaaz reporting at least 258 people killed — including 72 children and 42 women — in a single night of shelling just hours before Russia and China vetoed a United Nations Security Council resolution condemning the government of President Bashar al-Assad, analysts warn the onslaught in Syria marks a new chapter in which further bloodshed appears inevitable.

In shelling by tanks, artillery and what several sources inside Homs said were multiple rocket launchers, Syrian security forces have killed at least 350 people since late Friday, prompting the U.S. to close its embassy in Damascus and withdraw its ambassador and remaining staff.

“Its own supporters believe the regime has shown too much restraint and they have been increasingly vocal in calling for a crackdown,” Peter Harling, the Damascus-based Syria Project Director at the International Crisis Group, told GlobalPost.

“The situation in Syria is now entering a phase of extreme violence. The regime has not until now made use of all the fire power at its disposal. Now that Russia torpedoed the one political mechanism on the table, the armed struggle will take greater importance.”

An activist from Khaldiyye, the first opposition-held neighborhood of Homs to be targeted in the onslaught that began Friday around 10 p.m., gave a graphic account of an almost apocalyptic night of terror in the city that is already the hardest hit by the government crackdown.

“We are used to shelling so when it started we thought it would only last a few minutes, so everyone stayed indoors,” said Waleed Fares. “But then we heard a terrible, loud sound.”

The sound was from a local apartment block, home to 36 flats, Fares said, collapsing after being hit repeatedly by rockets and shells.

Rushing outside to help recover the injured and dead, Fares said the sound of mosques calling out “God is great” mixed with the explosion of shells and the cries of those in pain.

“There were children crying, women screaming, standing in their nightclothes because they had not had time to dress,” Fares said.

“We took the bodies and the injured to a nearby park. I counted around 40 bodies from the building collapse. The injuries were appalling: People missing limbs; people crushed so badly you couldn’t recognize them; people pierced by metal.”

Even in the park, terrified residents said they were not safe. “Three bombs fell on the park and killed around 30 people,” Fares said, one of them his friend, Omar Zarour, who was also trying to rescue trapped neighbors.

Omar Shakir, an activist in Bab Amr, another Sunni-majority neighborhood in Homs, said the shelling was like, “random machine gun fire, only much, much heavier.”

“The bombs fell like rain,” said Shakir, whose best friend, 23-year-old Madher Tayyara, a student turned volunteer medic died on Friday at home from shrapnel in his chest and head. “You didn’t know where they would fall. You can only pray.”

Several hospitals treating the dead and dying were raided by security forces, according to reporting from activists in Homs gathered by Avaaz, which described the humanitarian situation inside the city as appalling.

Small field hospitals set up to treat protesters were suddenly overwhelmed with hundreds of injured, according to activists. With security forces laying siege to neighborhoods and preventing medical supplies from reaching the area, activists feared many of the up to 1,000 people injured would die because there was no way to treat them.

One of the hospitals targeted was the Hikmat in Homs’ Inshaat neighborhood, where a video uploaded to YouTube yesterday appeared to show a doctor walking through a hospital whose roof was leaking and and bloodstains on the floor.

“Fifth of February, the Hikmat hospital,” says the voice on the video. “The surgery room was hit by shells. Here is one injured person,” he says, lifting covers to reveal a man unconscious from anesthetic, apparently left mid operation.

According to the Syrian Observatory for Human Rights (SOHR), medical staff and patients were gunned down when two field hospitals were targeted by Syrian forces Monday in Bab Amr, leaving three patients killed and a doctor needing an amputation.

“It’s a disastrous situation. People are losing their minds. When the bombing ceases we can hear them crying out for help.”

Interviewed by a GlobalPost reporter in Damascus on the day he fled with his family from Homs, Abu Yaman said his neighborhood of Inshaat had come under heavy fire, with no phone or mobile coverage for 11 days and no electricity and water for a week.

“We cannot walk in the streets so we made holes in the walls between each flat to reach a small shop at the end of the block open every day for just two hours,” he said.

“We are 10 families in the building and we all moved to the basement flat to use it like a shelter: 10 families living in a 150 square meter space underground.”

Abu Yaman said residents had begun to burn tables, chairs and other household wood to try and stay warm through winter nights without heating oil or electricity and that corpses were being buried in private gardens because graveyards were either full or impossible to access.

“My two children haven’t slept well for months,” he said. “My wife was pregnant but she lost the baby after she was shocked by a bomb hitting our building. No one in the world can imagine what Assad’s forces are doing in Homs since Friday.”

The Assad regime denied the assault on Homs, with state-run Syria TV claiming corpses shown in video footage — said by activists to be victims of the bombardment — had been people kidnapped and killed by “terrorist armed groups.”

The assault with heavy weapons initially appeared to have been triggered by the capture of more than a dozen soldiers by members of the rebel Free Syrian Army (FSA), which attacked a checkpoint and an airbase on Friday.

In a video released on YouTube and broadcast by Arab satellite channels, a man identifying himself as from the Farouq Battalion of the FSA is heard taunting the captured soldiers.

“How did we capture you and you have everything, arms and ammunition, at this checkpoint?” he asks. “If we had captured women it would have been more difficult. It did not even take us 10 minutes to capture you.”

The taunting takes a sectarian turn when each man is forced to admit he is from the minority Allawite sect, an offshoot of Shiite Islam from which the Assad family and much of the regime and loyalist security forces are drawn. Around three quarters of Syria’s population, and the overwhelming majority of the opposition, including the FSA, are Sunni Muslims.

A spokesman for the Free Syrian Army told GlobalPost the armed rebels had lost 27 soldiers in four days of fighting with Assad's troops up to Friday, saying the regime had planned an assault on Homs before the capture and video of its soldiers.

In interviews with half a dozen different residents and activists in Homs since Friday, it appeared the majority of Assad’s forces remain, for now, deployed around restive neighbourhoods, while heavy artillery and rockets pound the city from afar.

The fear of many though, is that a full scale ground assault is imminent, with dark memories of the massacre of up to 30,000 civilians in Hama after that nearby Sunni-majority city rose up three decades ago to challenge Assad’s father, Hafez.

“The Assad regime wants to finish us,” Abu Yaman said. “We fear the president wants to make Homs another Hama. We are living in a very hard situation and we need help from the world.”