What happens when air conditioning fails, engines won't start, planes get too heavy, and more 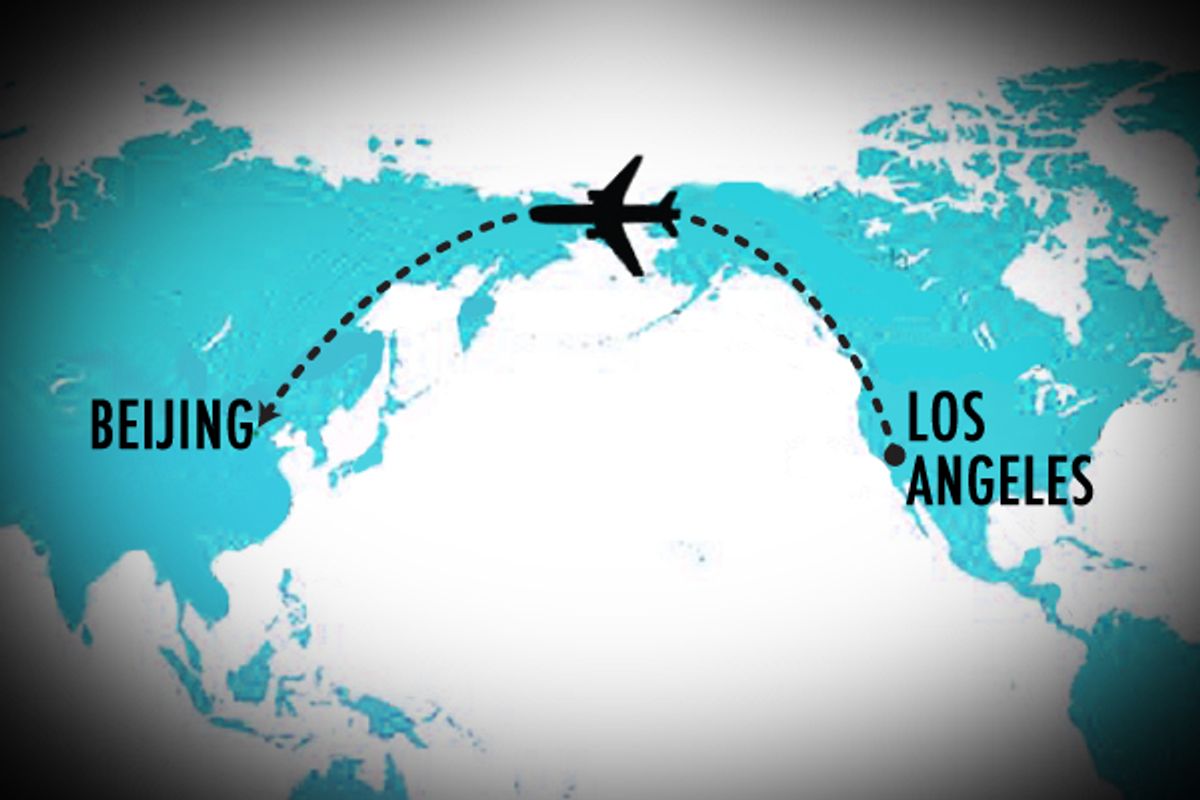 I routinely fly from Los Angeles to Beijing on United. It's an all-daylight flight over Alaska and Russia. How can I find the approximate route the Air China flight takes on the same route? I'm flying that airline later in the month and would like to know what I'll be seeing below.

Routings aren't commonly airline-specific. The determining factors tend to be air traffic control constraints and weather (winds, storms, etc.). Routings tend to be somewhat consistent, but it can vary day to day, even for flights between the same two cities.

Another factor is the aircraft type. Two-engine planes are subject to what we call ETOPS (extended twin-engine operations) restrictions, which might result in a different, less direct routing than a plane with four engines can accept. ETOPS rules require planes to remain within particular flying distances (three hours, most commonly) of an acceptable diversion airport. (The diversion airports themselves will vary, subject to weather.) Across the North Atlantic it makes little difference; two engines or four there are always adequate diversion options relatively close by. Over the Pacific, though, it's a little different, and there might be considerable differences between a route operated by, say, a two-engine 777, and the same route operated by a four-engine 747.

We were flying from San Juan, Puerto Rico, to New York on a 757. While taxiing out, the plane's air conditioning malfunctioned and the cabin temperature became very hot. After several minutes of troubleshooting, the problem could not be fixed and we taxied back to the gate. The captain explained that although it was permissible to continue on with the broken AC, a whole new flight plan was required, including an altered routing that would add over 45 minutes' flying time -- in turn requiring us to take on more fuel. We departed more than an hour late. I'm baffled. Why on earth would a broken air conditioner mandate a whole new flight plan and a longer routing?

For better or worse, crews are often reluctant to to explain the technical nitty-gritty of mechanical failures, and this is a great example of how, as a result, a passenger's perception of the problem -- in this case, "a broken air conditioner" -- isn't nearly the whole story.

Planes are not air-conditioned in the manner of your car or home; there is no air conditioner, per se. The machinery used to heat and cool the cabin is something known in pilot parlance as a "pack" (an acronym for pneumatic air cycle kit). Normally there are two packs, located in the belly of the aircraft. They are supplied by bleed air from the engines, adjusting temperature by means of a compressor, turbine and air-to-air heat exchanger; there is no coolant gas (i.e., Freon). These same packs are also responsible for pressurization, which is where the complications described above enter the picture.

A single functioning pack is adequate to maintain both adequate pressure and temperature. Thus if one fails, a flight can still be dispatched safely. However, you've lost your redundancy; if the remaining pack were to fail, pressurization and temperature control would be lost entirely. So, single-pack operation entails some important restrictions -- namely a lower-than-normal altitude and the need to stay within a certain distance to a diversion airport at all times. The exact rules vary from plane to plane, but a typical example is having to remain below 35,000 feet and within 60 minutes' flying time of a suitable landing spot (transoceanic flights are likely to be forbidden outright). Usually this increases both flying time and fuel burn. In this case, a flight from Puerto Rico to New York that was originally planned to be mostly over water now required a longer inland routing at a more fuel-thirsty altitude.

I was once on a flight from Chicago to Atlanta and we had to make an emergency landing in Nashville due to something that made it necessary to fly only as high as 10,000 feet. Due to such a low altitude, we were told, we would burn too much gas and could not reach Atlanta nonstop. Were they telling us the truth and how serious was the situation?

This sounds perfectly legitimate to me. See the previous question. Every so often a plane will be altitude-restricted due to this or that mechanical issue -- perhaps something pressurization-related. This will increase fuel burn to the point where an interim stop is required. (Remember that you need enough fuel not only to reach your destination, but enough to reach at least one alternate airport, plus a substantial buffer on top of that.) This malfunction might be something that happens en route, or the flight might be planned that way from the start.

About a year ago I was working a flight from South America to the United States. Over the Caribbean, a pressurization malfunction dictated a prompt descent. Efforts to troubleshoot the problem failed, and so we had to stay low. Together with our dispatchers we ran some calculations, and sure enough, it would have been impossible to complete the flight without violating legal fuel parameters. And so we wound up diverting to Puerto Rico.

You speak of an "emergency landing." Passengers have a habit for referring to any diversion or precautionary landing as an "emergency," when most are in fact precautionary or even routine. Declaration of an emergency is reserved for situations that are a lot more urgent -- such as when there is a risk of injury or damage to the airplane, when the extent of a problem is not fully known, and/or or when priority air traffic control handling is required. Knock on wood: I've made several diverts and one or two precautionary landings, but never an emergency landing.

My mother was on a flight that couldn’t take off because an engine wouldn't start. They were towed back to the gate and had to have the engine started with the help of an external cart of some sort. Could you explain what causes an engine to fail to start, how the external is used, and why it’s safe to fly in this condition?

That "the engine would not start" doesn't sound right. That's not telling me much. Starting a jet engine is a multi-step process and the malfunction could involve any of several components -- not all of which are ultimately responsible for the continued running of the engine. Again, an airplane is not a car, and a jet engine does not start, stop or run the way a piston engine does.

Jet engines are started using compressed air, which is normally supplied either by the APU (the small auxiliary turbine in the back) or another, already running engine. This air spins the engine's compressors to a certain minimum RPM, at which point fuel is introduced. Combustion then accelerates the compressors and turbines to "idle" speed, and the starter (air valve) is shut off.

It sounds to me like there was a problem with the APU generating adequate duct pressure to get the compressors spinning to the necessary RPM. Why this may have been happening I can't say. There are different possibilities (duct problem, valve problem, unusually high elevation ...). And so, an external air machine -- sometimes referred to as an "air cart" or "huffer cart" -- needed to be hooked up instead. In fact, before the advent of APUs (the Boeing 727 was the first jetliner to have one), jet engines were always started this way.

Once up and turning, jet engines don't shut off or "stall" the way the engines in cars sometimes do. However, if for whatever reason an engine failure occurred later in flight and was to be restarted, this air problem no longer applies. You can use the APU, the other engine or the speed of the airplane -- the airflow itself pushing into the engine -- to turn the compressors to the required RPM.

More on the weirdness of jet engines here and here.

I was on a Southwest flight from Chicago to Portland, Ore. We were at 35,000 feet and the air was very choppy. The captain came on and apologized. He told us that although it was much smoother at 37,000 feet, we were "too heavy" to climb that high and would have to ride out the bumps for a while. Really? Why would another 2,000 feet make that much difference?

For fuel economy, if not a smoother ride, higher is always better, but planes can climb only as high as their weight allows. As you climb, the air thins. Engine output is reduced, and the wing cannot support as much airplane as it can down low. A given cruise altitude must account for both high-speed and low-speed stalls, in both smooth and turbulent conditions. Over the course of a flight, climb capabilities improve as fuel is burned away. The allowable altitude at any given time isn't something you ballpark; there are specific maximum altitudes based on very specific weights, and they must be adhered to. The difference between 35,000 and 37,000 can be fairly significant.

Don't believe me? You can always "Ask the Pilot." This guy, I mean. Introducing my latest imitator.