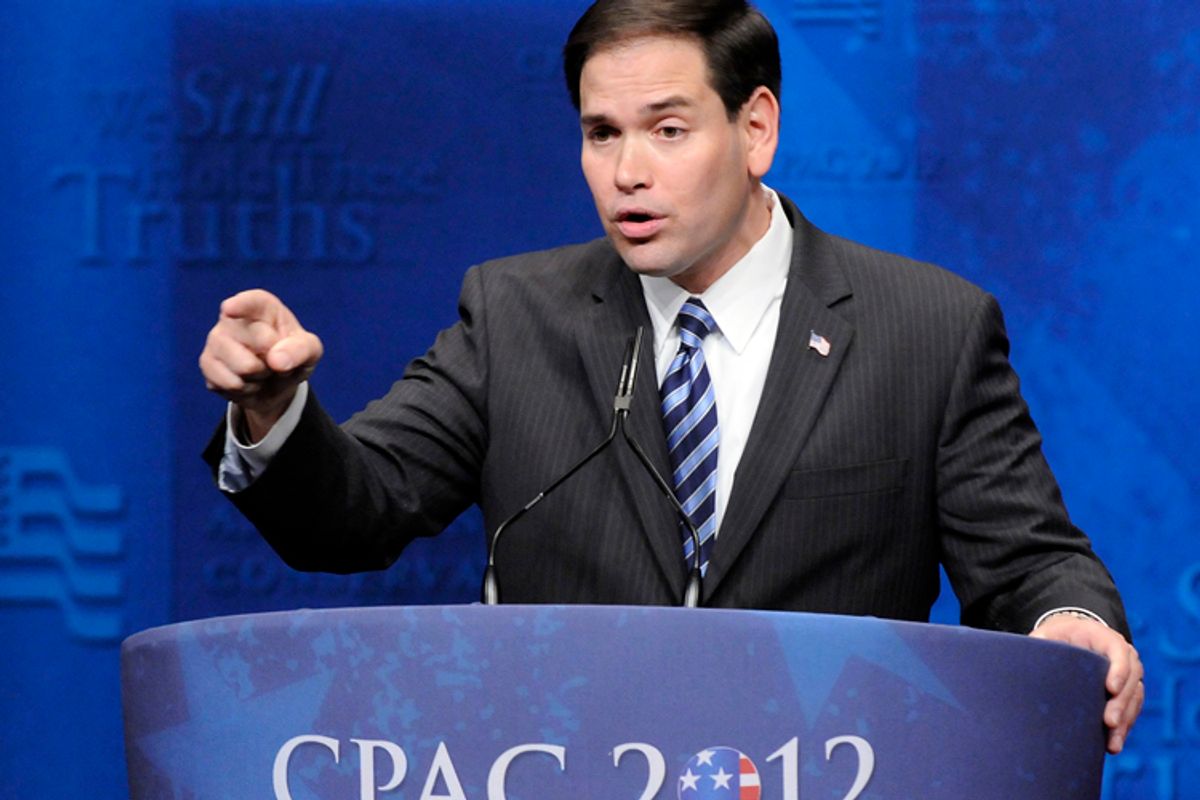 CPAC is here, so it's time for everyone's annual look at the psychos invited to the premier conservative event of the year, and those unfortunate enough to have been excluded.

GOProud, the gay Republican group that was founded because the Log Cabin Republicans were considered too concerned about gay civil rights and not sufficiently focused on "fiscal issues," is not invited this year, because they are too "aggressive" about being gay, which made Jim DeMint uncomfortable.

CPAC also uninvited the John Birch Society, which had made a triumphant return to mainstream conservative acceptance in 2010, when they co-sponsored the conference.

But! While the Birchers and the open homosexualists are no longer welcome, there is still room for multiple outspoken white nationalists!

The National Review's John Derbyshire, a stock "pervert Tory" character from a Martin Amis novel sprung to life and given a sinecure at the National Review, is hosting a panel on "multiculturalism" (boo hiss) featuring two of America's most detestable sacks of shit: Peter Brimelow, founder of white supremacist site VDARE, and Robert Vandervoort, the director of some sort of "don't make me press one for English" nativist group and a white nationalist from way back.

CPAC organizers are like, we didn't specifically organize this panel ourselves so whatever, but they are not canceling the panel, because the conservative movement has always quietly set a place at the table for their white supremacist allies when they get together for Thanksgiving. And after everyone says grace (and sings "God Bless America" and the national anthem and does the Pledge of Allegiance) comes the ceremonial declaration that liberals are the real racists, for inventing welfare.

The Derbyshire, Brimelow, and Vandervoort (these names!) panel is called "The Failure of Multiculturalism: How the Pursuit of Diversity Is Weakening the American Identity," and the fact that these panelists are all well-compensated members in good standing of the conservative movement instead of shrieking their "defense of Western Civilization" nonsense for free from a bench outside a subway station does suggest that something has gone wrong with the American experiment. (I think we let too many racist British people enter the country and steal our right-wing think tank and magazine contributor jobs, personally.)

I am guessing the panel will feature at least one "why is there no white history month" joke.

CPAC's biggest draw today was the speech by Marco Rubio, who many expect to be Mitt Romney's eventual running mate, because Republicans think he'll appeal to the voters they accuse of poisoning American identity with their insufficiently Western European heritages.