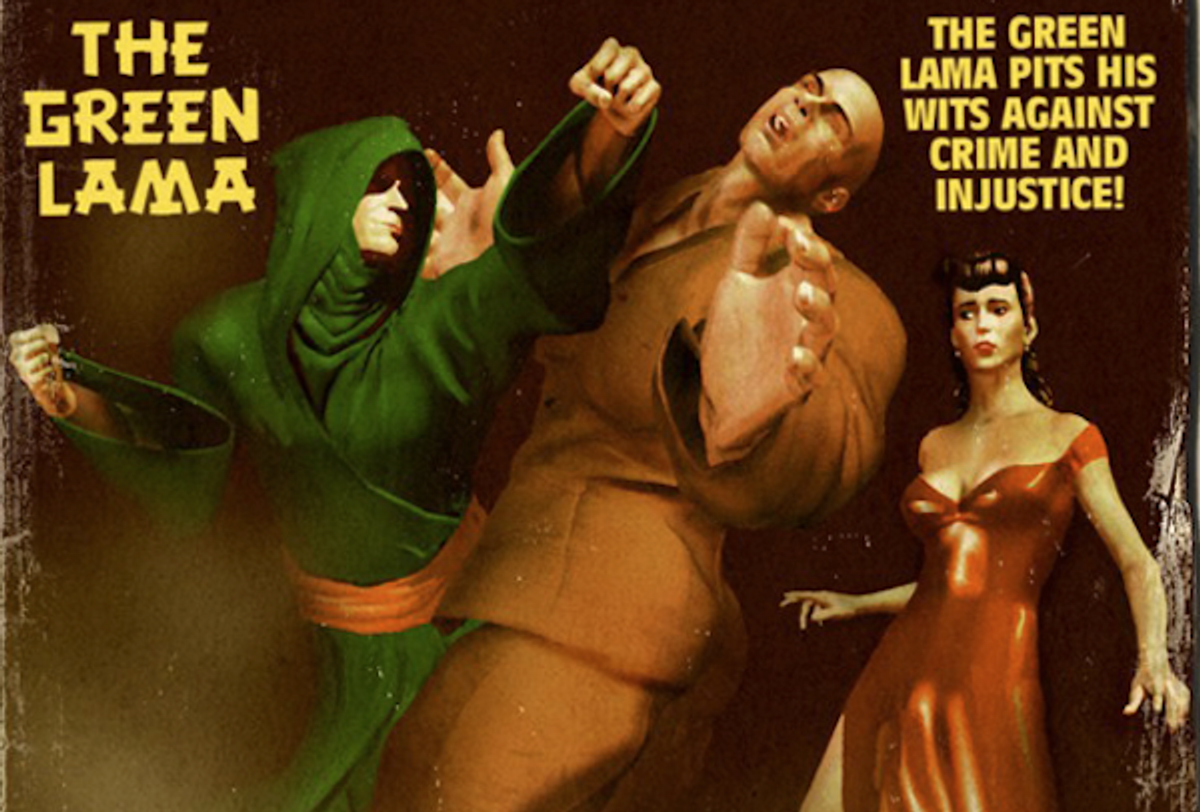 Sunday afternoons in New York can lead to all sorts of odd discoveries. This most recent one brought me to the Rubin Museum of Art on 17th Street and into an arts mashup the likes of which I have never seen and probably would not have believed if someone were to tell me about it.

First of all, you should know that the museum (my new favorite as it turns out; just spend five minutes in the serenity of the cafeteria to understand why) has an ongoing exhibition called Hero, Villain, Yeti!: Tibet in Comics. Reason enough to explore. But Sunday's particular multi-pronged program featured an original commission by the acclaimed visionary composer Paul Haas. For this event, Haas created a synchronized work to accompany the panels of the 1940s cult classic comic book hero the Green Lama. "Part radio-play, part light show, part silent film, part concert, this unique offering by Sympho and the musical trio MAYA," provided a narrative score for the sequential projections of panels from Episode 2 of the Green Lama comic book series. Hosted and narrated by WNYC's Elliot Forest, the event featured noted actors Linus Roache ("Law & Order") and Brian Cox ("X-Men," "Troy," virtually everything else) voicing the characters. I mean, really, with that setup, how could you lose?

If you have never heard of the Green Lama (and I admit, even as a comic book nerd, I hadn't) apparently he was an American pulp magazine hero of the 1940s whose superpower was imparted by, of all things, Buddhism. Om mani padme hum. Such is the mantra of billionaire playboy Jethro Dumont (best billionaire playboy superhero name ever) when he wants to magically turn into his crime-fighting alter ego, the Green Lama. With his trusty sidekick Tsarong, Dumont/Lama battles evildoers like Willie the Sleeper and the Mad Magi.

While the premise of the Green Lama's power purports to be divined by the enlightened, the writing is pure pulp and camp (as evidenced by the panels included here).

But discovering a long lost superhero was really just part of the fun. Surreal as it was, the combination of the excellent music by MAYA (harp, flute and percussion), along with the spirited voice-overs, and the lighting/synth/background artistry by Haas himself, created a mixed-media sensory experience that was like nothing I've seen before and, dare I say it, it even bordered on the spiritual.