Adele: Too fat for fashion designer 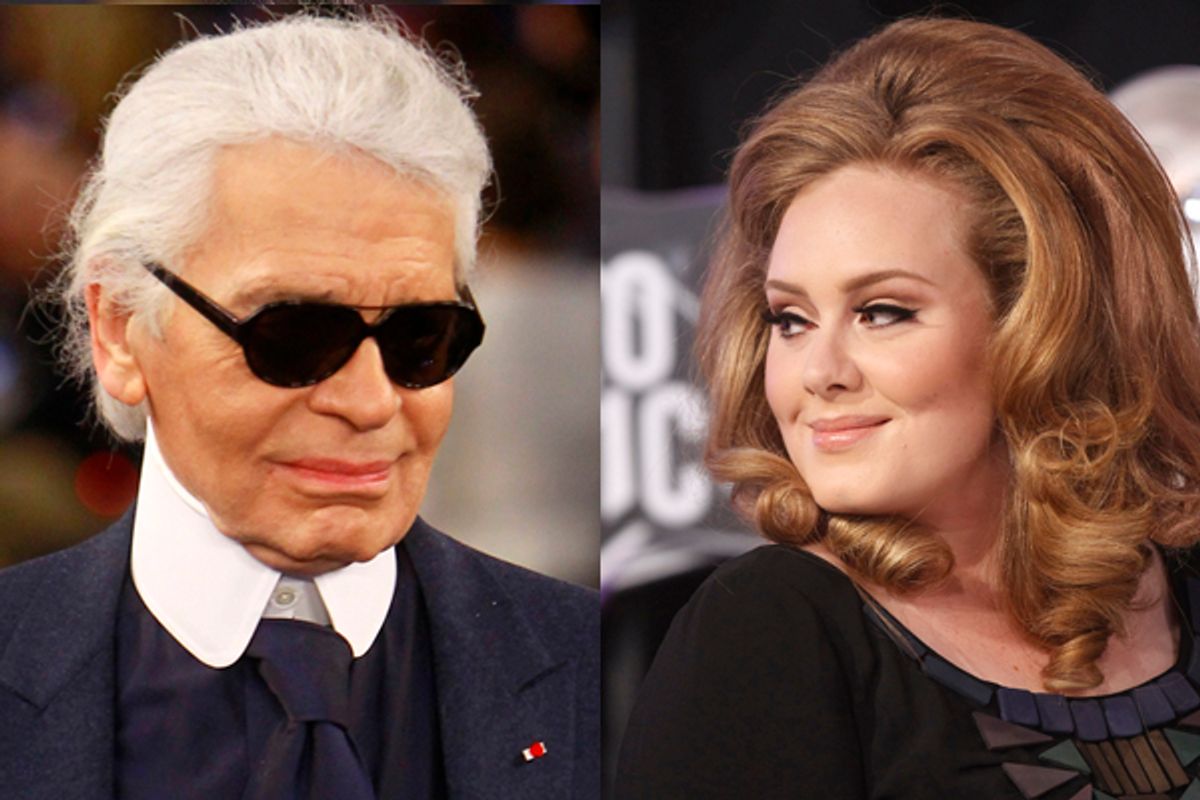 Is it possible to be both "too fat" and "beautiful"? Ask Karl Lagerfeld – the man who this week found himself about as popular as last year's jeggings when, in his capacity as Metro's guest editor, he sounded off about Adele.

The 78-year-old Lagerfeld, a man who co-authored a best-selling diet book featuring "protein sachets," "homeopathic granules" and "quail flambé" -- and who has very publicly struggled with his own weight issues over the years -- has never been one to hold his tongue on the subject of women's bodies. In 2009, he was quoted in the German magazine Focus saying, "No one wants to see curvy women. You've got fat mothers with their bags of chips sitting in front of the television and saying that thin models are ugly." But this time, the Chanel designer seems to have believed he was paying a compliment. While declaring the British chanteuse "a little too fat," he helpfully acknowledged that "she has a beautiful face and a divine voice" and called her "the thing at the moment."

Lagerfeld's remarks came within a piece in which he also declared, "If I was a woman in Russia I would be a lesbian, as the men are very ugly," and that "Nobody wants Greece to disappear, but they have really disgusting habits – Italy as well." He also claimed that Michelle Obama once said, "Why you don't like my big black ass?" (the First Lady never said any such thing), and asserted that "People in magazines are 50 percent bimbo and 50 percent pregnant women." So Adele gets off pretty lightly in the whole thing. Okay, his math might not be that far off on the magazine content thing, but it's safe to say that while the man can rock a double-breasted silhouette like nobody's business, he might just be a total moron.

For his part, Lagerfeld, perhaps sensing accurately that it's one thing to put down Russia, Greece and Italy, but you do not want to screw with Adele fans, beat a hasty retreat from his remarks. "I’d like to say to Adele that I am your biggest admirer," he added in Metro later in the week. "Sometimes when you take a sentence out of the article it changes the meaning of the thought. What I said was in relation to Lana Del Rey and the sentence has since been taken out of context from how it was originally published. I actually prefer Adele, she is my favorite singer and I am a great admirer of her. I lost over 30 kilos over 10 years ago and have kept it off. I know how it feels when the press is mean to you in regards to your appearance. Adele is a beautiful girl. She is the best. And I can’t wait for her next CD." Thanks for tossing Adele the bone of a "beautiful face," Karl.

It's significant that in his original story, Lagerfeld very clearly decreed Adele "a little too fat," but the paper's writer Kenya Hunt quoted it Wednesday as "a little bit fat." Frankly, neither line is cool, but Lagerfeld's true observation, his deeming Adele "too fat," shouldn't be altered or toned down. It's significant because it implies not merely that she is particular body type, but that said type is unacceptable, that it is "too" much to deal with. Too fat for whom? Not Adele, clearly. Not her throngs of fans.

Somehow, in this day and age, the fact that a young woman of ample proportions is making it is considered revolutionary – unnerving even. That's not just Lagerfeld-specific idiocy either. This very week, New York Times magazine writer Jacob Brown crowned Lana Del Rey as "the perfect antidote to Rihanna-Gaga overload — dare we say, a skinnier Adele, a more stable Amy Winehouse." Really? Who knew that the world needed a "skinnier" antidote to Adele, that her size was somehow on par with the late Winehouse's addictions?

Thank God that Adele herself, who underwent throat surgery in November currently and has the top-selling album in the country, has a different set of priorities -- one that doesn't include giving a toss about what some fan-brandishing fashion designer or Lana Del Rey slobbering Times writer or anybody else thinks about her body. She tells Anderson Cooper on Sunday's "60 Minutes," "I don’t want to be some skinny mini with my tits out. I really don’t want to do it and I don’t want people confusing what it is that I am about…. I’ve never seen magazine covers and music videos and been like, I need to look like that to be a success." She's right, she doesn't. She's up for six Grammys this Sunday and has even managed to adorn the cover of Vogue, despite her crippling handicap of weighing over 100 pounds. She tells Cooper, "I represent the majority of women and I'm very proud of that." But whatever your size, she represents a whole lot more -- dare we say, a breathtaking voice of sanity in a size-obsessed world?