What if the Academy honored movies that people really liked? The "Twilight" vs. "Melancholia" showdown, at last 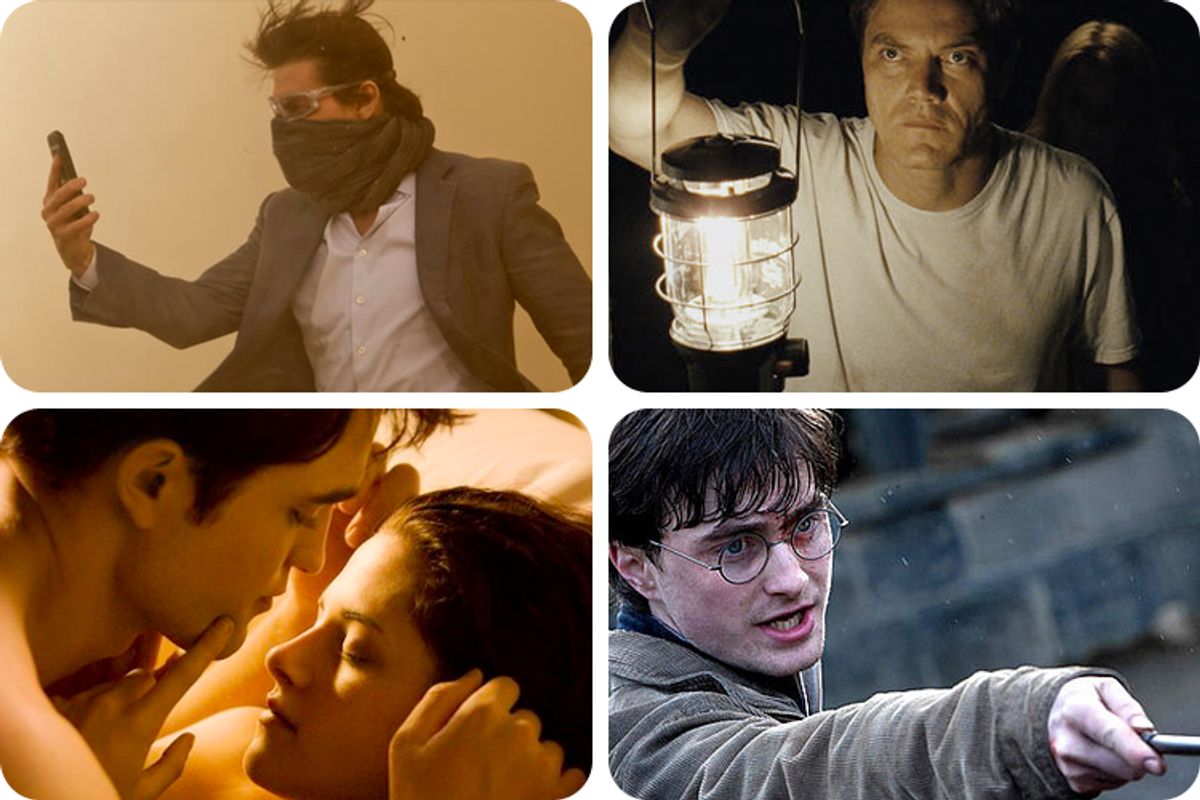 I'm here to make a modest proposal. What if the Oscars -- an imaginary Oscars, a thought-experiment Oscars, the Oscars of an alternate universe -- honored movies that people actually liked?

No, I know, I know -- they sometimes do, pretty much on the stopped-clock-occasionally-correct principle. And somebody must like each of this year's best-picture nominees, with the possible exception of the universally allergenic "Extremely Loud & Incredibly Close." (I appreciated one reader's recent comment that the hidden virtue of that film lay in combining the annual quota of schmaltzy Tom Hanks and Sandra Bullock vehicles into one compact package.) After all, the whole reason why "The Artist" appears to be the front-runner is because it's charming and unpretentious and nearly impossible to dislike -- although I don't happen to think it's all that great -- whereas the other nominees do not share that quality.

Still, you know what I'm talking about. Generally speaking, in recent years only certain kinds of movies have been serious candidates for the major Oscar categories, and in particular for best picture. While it's impossible to lay out a precise description, it's like Justice Stewart's famous definition of obscenity: You know it when you see it. Earnest, middleweight dramas that teach life lessons and feature major emotional climaxes always leap to the forefront. They should make you laugh before they make you cry, or vice versa. Classic three-act structure; a major star playing slightly against type; at least one odd or gruesome or humorous supporting performance from a name actor. (Notice that I have just precisely described "The Descendants," a tailor-made Oscar-winner if ever there was one, which for both extrinsic and intrinsic reasons is likely to fall short this year.)

Even Oscar winners that appear to violate some of these rules hew to the overall pattern. "No Country for Old Men" is an open-ended, nihilistic, '70s-style American drama, but also one that alternates dark and light, features identifiable stars and a classic Western landscape. "The Hurt Locker" has no name actors, but offers an archetypal tale of courage in warfare that straddled the nation's ideological divide. (It was also the least successful best-picture winner in history.) "Slumdog Millionaire" also had no stars and was set in a foreign country, but was essentially an old-time Hollywood drama filtered through India and then through canny stylemonger Danny Boyle.

I think we all understand that the 6,000-plus voters of the Academy of Motion Picture Arts and Sciences are a peculiar and self-selected group, and that they aren't selecting the winners based on criteria that are important to anyone else. They aren't picking movies the public likes. Indeed, over the last two decades the Academy's taste has wandered increasingly far from that of the mass audience. And while artistic merit is an inherently nebulous and subjective concept, I don't think that's what they're using either. Seriously, Academy members -- let's go out for coffee, and then you can sit there and look me in the eye and tell me that "War Horse" or "Midnight in Paris" or "Extremely Loud & Incredibly Close" (for the love of Jesus!) is a better movie than "Melancholia" or "Take Shelter" or "Coriolanus" or "Drive" or about 30 other things I could come up with.

For that matter -- and this one's just as important -- try to convince me that those nominated films are a better example of what Hollywood does best than such big, spectacular and hugely popular films as "Harry Potter and the Deathly Hallows: Part 2," or "The Twilight Saga: Breaking Dawn Part 1" or "Mission: Impossible -- Ghost Protocol." Sorry, but no. The thing is, Oscar voters are picking the movies that make people who work in the film industry feel better about what they do, for reasons that perhaps a highly-paid shrink could puzzle out. When we get involved in obsessive horse-race coverage of the Oscar campaign, we're using voodoo and amateur psychology and meaningless statistics and other forms of hokum to try to get inside the heads of those 6,000 voters. I say the hell with it.

OK, I don't quite say the hell with it. I'm as professionally interested in the outcome as anybody else who covers this business for a living, and as my editor recently observed, the Oscars are quite a bit like the Republican presidential contest. Just because the whole thing's a charade doesn't mean that nobody cares, or that we can ignore it. But my proposal for an Alternate-Dimension Oscars tries to imagine what the awards might be like if they didn't disqualify, de facto, almost every kind of movie that people like to watch.

Believe it or not, I'm not envisioning an awards show geared toward the artsy-fartsy films that pointy-headed intellectuals like me tend to favor. If the best-picture race were between "Melancholia" and "Uncle Boonmee Who Can Recall His Past Lives," and Nick Cave were getting ready to rip open that envelope and announce the winner, wouldn't that have America on the edge of its sofa? Please, no. I think the "Dark Knight" problem is a much bigger one, by which I mean the Academy's propensity to ignore large-scale, well-crafted, ambitious entertainments -- the kind of movies at which Hollywood excels, like it or not -- if they seem too violent or too pulpy or too fanboyish or too free of tedious message-delivery.

This isn't exactly breaking news, but most popular genres of film are de facto ineligible for Oscar consideration: superhero movies, thrillers, crime dramas, romantic comedies and franchise pictures of any kind. On the other side of the coin, despite a recent reputation for indie-ness, the Academy largely steers away from the kinds of serious art-house dramas that play film festivals and keep upscale big-city audiences excited about the possibilities of the form. Instead, the real-life Oscars find themselves hopelessly trapped in the middle, endorsing calculated middlebrow pablum that everybody involved knows is a big pile of unmemorable meh. If the aim of the entire organization and its awards show is to present the best face of the American film industry to the world, then this whole situation is ridiculous and self-destructive.

Hence my proposal for an Alternate Universe Academy Awards, an unholy blend of the MTV Movie Awards and the Indiewire critics' poll that will get people excited, lead to considerable fighting and weeping, and produce some genuinely unexpected moments on Oscar night. This is my alternate universe, at least for now, so I'm announcing the best-picture nominees. I hope you'll play along, with your own lists, emendations and angry deletions. In recognition of the fact that there's at least a little Venn-diagram overlap between my manufactured universe and the real one, I've kept the unlikeliest of this year's Oscar nominees on the list.

Harry Potter and the Deathly Hallows Part 2 I'm not a big fan of the series, or the books, but that's not what this is about. A tremendous technical accomplishment and a huge worldwide hit, managed with considerable dramatic chops and without selling out the source material.

The Lincoln Lawyer We can talk about the best-actor category later, where I think Matthew McConaughey's underappreciated comeback role should be a strong contender. But from its '70s-style L.A. noir vibe to its combination of sleaze, humor, emotion and violence, "Lincoln Lawyer" was arguably the year's best Hollywood genre film.

Melancholia No need to repeat all the praise I and other critics have lavished on Lars von Trier's hybrid of Chekhovian wedding comedy and apocalyptic masterpiece, with terrific performances from Kirsten Dunst and Charlotte Gainsbourg. Cinematic accomplishment of the year.

Mission: Impossible -- Ghost Protocol Tom Cruise back in his borderline creepy, control-freak comfort zone, and a dynamite live-action debut from director Brad Bird added up to an enormous hit and the year's most satisfying action flick by far.

A Separation Yeah, it's a real-world nominee in the foreign-language category, but Asghar Farhadi's continually surprising Iranian domestic drama, with its hidden stories about class conflict and its tense, involving portrait of life inside the Islamic Republic, is the year's best example of global realism.

Take Shelter For my money this apocalyptic weather thriller -- or is it a private tale of madness? -- captured the American national mood better than anything else I saw all year, with a shattering lead performance by Michael Shannon and terrific supporting work by Jessica Chastain.

The Tree of Life I was as surprised as anybody to see Terrence Malick's long-brewing history of humanity and the universe on this year's real-world best-picture list, and I think that's largely due to the performances by Brad Pitt and Chastain in the more comprehensible Texas-childhood scenes. Given its reputation among critics (not necessarily including me) and Malick's near-godhead status, it belongs here too.

The Twilight Saga: Breaking Dawn Part 1 Go ahead and laugh, superior-minded Salon readers. Laugh, I tell you! This is a strongly crafted pulp movie, so pretty you want to bite it. Director Bill Condon fully satisfied the worldwide Twihard base while also hinting at some of the genuine perversity that underlies the saga. I won't indulge my Twilight-vs.-Harry Potter riff right now, except to restate my view that the best of the former (this one) is probably superior to the worst of the latter.