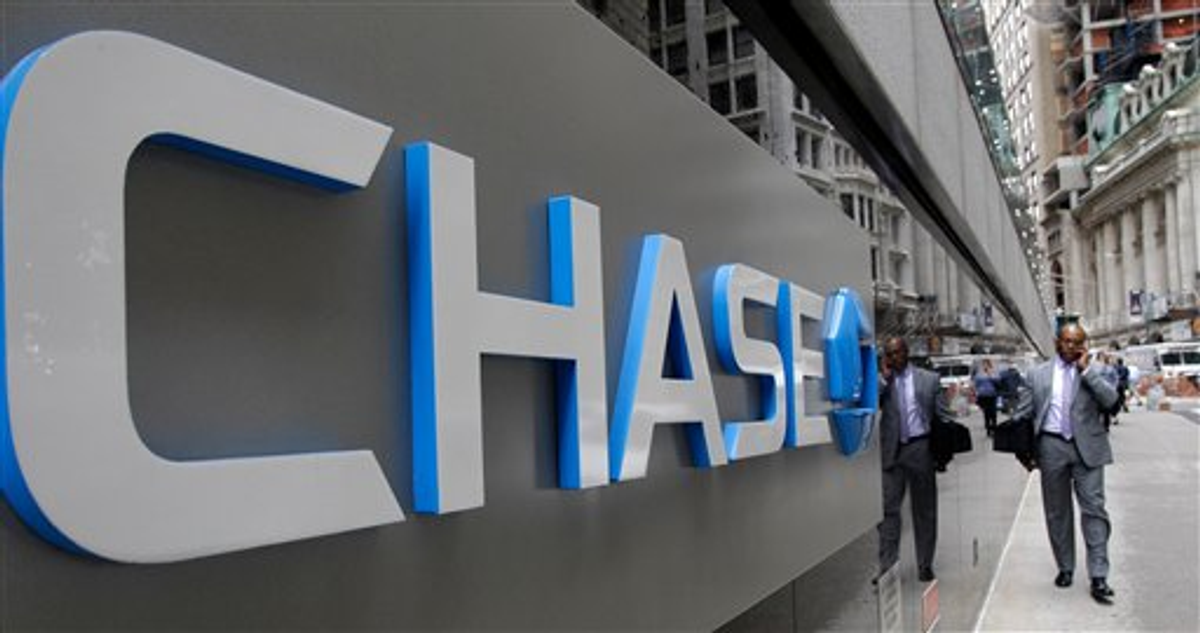 This Oct. 12, 2011 file photo shows the J.P. Morgan Chase logo at the base of one of the bank's larger Lower Manhattan buildings in New York (AP Photo/Kathy Willens)
--

On Thursday, a group of well-connected and powerful men announced that the federal government and state attorneys general had agreed to a multibillion-dollar settlement of claims relating to falsified foreclosure documents. The image of former corporate lawyer-turned-Attorney General Eric Holder and Iowa official Tom Miller complimenting each other on their courage and bravery was a stark reminder of how little power foreclosure victims have in Washington. The terms of the settlement were still secret, but we saw hints of what is to come: The website set up to inform the public noted that homeowners may not know for up to three years whether they are eligible for help.

Rather than settling anything, this agreement is simply a continuation of the policy framework of both the Bush and the Obama administrations. So what, exactly, is that framework? It is, as Damon Silvers of the Congressional Oversight Panel, which monitored the bailouts, once put it, to preserve the capital structures of the largest banks. "We can either have a rational resolution to the foreclosure crisis or we can preserve the capital structure of the banks," said Silvers in October, 2010. "We can’t do both." Writing down debt that cannot be paid back -- the approach Franklin Roosevelt took -- is off the table, as it would jeopardize the equity keeping those banks afloat.

This policy framework isn't obvious, because it isn't admissible in polite company. Nonetheless, it occasionally gets out.  Back in August 2010, at an "on background" briefing of financial bloggers, Treasury officials admitted that the point of its housing programs were to space out foreclosures so that banks could absorb smaller shocks to their balance sheets.  This is consistent with the president's own words a few months later.

"We can’t magically sort of fix a decline in home values that’s so severe in some markets that people are $100,000 to $150,000 underwater," he continued. "What we can do is to try to create sort of essentially bridge programs that help people stabilize, refinance where they can, and in some cases not just get pummeled if they decide that they want to move."

At the time, the President was referring to HAMP, the $75 billion program announced in March 2009 as the administration's signature program to address problems in the housing market. HAMP had been created because Sen. Jeff Merkley of Oregon demanded some remaining bailout money be used to help homeowners, or he would withhold a critical vote on unlocking the authority for the administration to get more TARP money. Larry Summers sent a letter to Merkley offering both a debt write-down plan ("cramdown") and the dedication of up to $75 billion of money to help homeowners, in return for his vote.  In fact, administration officials had already decided that they would not pursue a debt write-down.

The settlement announced yesterday, whether you believe the $25 billion number (of which only $5 billion is actual cash), is one-third the size of HAMP. As Obama noted nearly two years ago, that's just not very much gravel.

A more realistic solution to the problem was actually debated within the administration during the transition, in debates revealed by economist Laura Tyson at the Financial Times' View from the Top Conference in 2011.  She noted that top officials had to decide whether to engage in mass write-downs of debt similar to FDR's programs in the 1930s by using tools such as judicial modification, or whether to allow millions of foreclosures to go forward. They chose the latter. The current foreclosure epidemic, in other words, is partially a policy choice.

Everything done subsequent to that decision has been designed to mask this essential policy choice. This settlement is simply the latest example. While the headline number on the settlement is $26 billion, the actual cost to the banks and benefit to homeowners could be far lower, depending on how this complicated system of "credits" will be allocated. The banks will in all likelihood be able to charge off activities they had already planned, such as not pursuing deficiency judgments, refinancing and loan modifications. Some of the money may wind up being be paid not by banks, but by investors, such as pension funds.

Moreover, when the banks have reached settlements with law enforcement officials, they generally don't hold to them.  The Nevada attorney general recently sued Bank of America for violating an agreements the state had made with Countrywide (once the largest mortgage originator in the country, now owned by BOA)  to end various predatory practices. When you issue parking tickets instead of handcuffs for multibillion-dollar crimes, the crime spree continues unabated. And obviously, HAMP, which was originally budgeted at three times the size of this settlement, has been a complete catastrophe.

Undergirding all of the chatter about the settlement is a basic reality that is not acknowledged by the administration.  There has simply been no thorough investigation of how the mortgage servicer market works, or how extensive forgery and fraud are. Banks routinely claim that few people have lost their home due to faulty foreclosures, and while that's probably not true, we simply don't know the extent of the problem. In effect, this settlement is a solution imposed on a problem yet to be diagnosed.

At the State of the Union, the president announced a new task force to investigate the abuses leading up to the mortgage crisis, as well as related tax and bank fraud questions.  This force is a multi-headed hydra, led by officials from the Department of Justice and New York Attorney General Eric Schneiderman.

The initial signs aren't hopeful; DOJ has assigned 55 people to the task force, including 10 FBI agents. During the S&L crisis, which was 40 times smaller that this one, roughly 1,000 FBI agents were involved in the investigation. To put it another way, given the $5 trillion of home equity lost in the crisis, DOJ has assigned one person for every $100 billion lost. It is as if Apple lost its entire cash horde of $100 billion, and the government assigned just one person to find out what happened.

But there has been a good amount of private litigation and effort already, so though unlikely, it isn't absolutely hopeless that there could be some handcuffs. A good test case to see what happens next is to see who is chosen to head the task force on a staff level. Someone like former TARP Inspector General Neil Barofsky or Rep. Brad Miller of North Carolina would indicate some level of seriousness. A traditional Justice Department bureaucrat would indicate otherwise.

Settlement or no, the housing crisis isn't going away. The entire mortgage market at this point is backstopped by the government, and even so, housing prices are sliding. The roughly $1 trillion of underwater mortgages and the destruction of the rule of law in the private mortgage market need to be dealt with, one way or another. And they will be, whether through a restoration of a healthy housing market, or through the end of broad homeownership as part of the American experience.