When my job stopped paying

After a year of unemployment, I landed a contract gig. Then the paychecks stopped coming -- but the work didn't 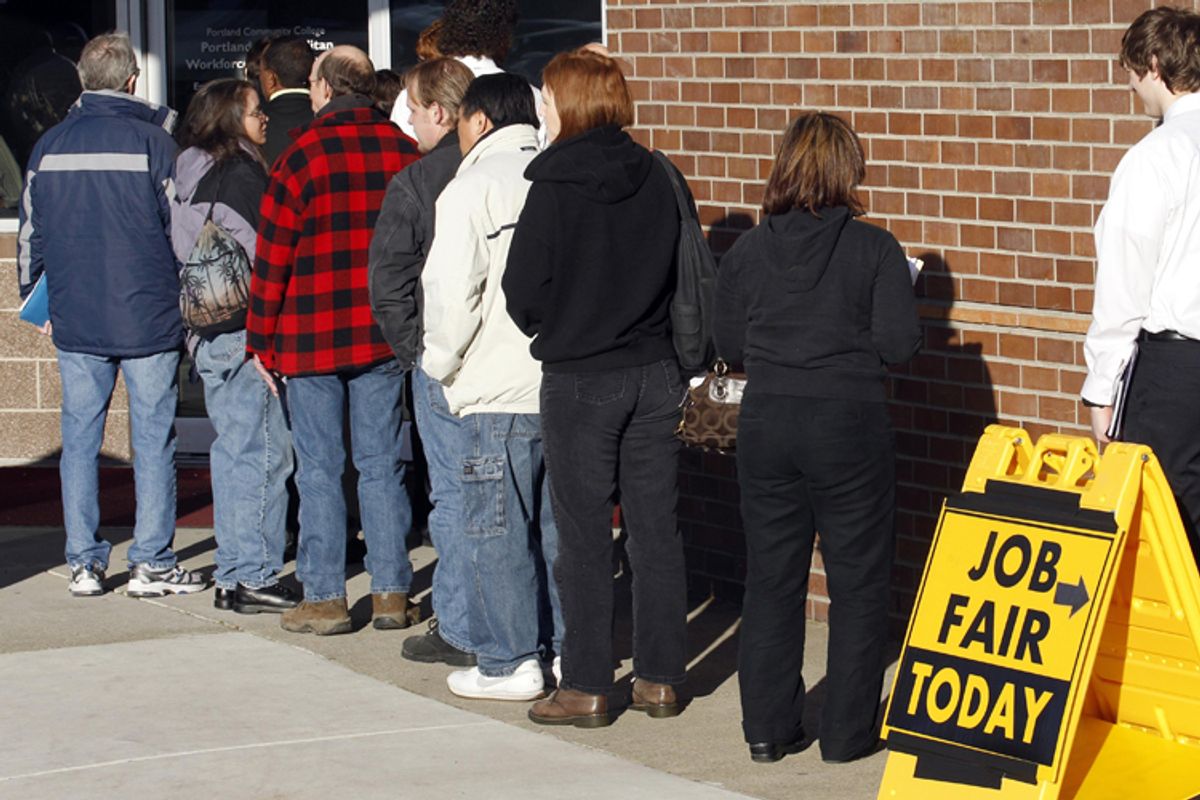 People waiting in line at a job fair in Portland, Ore. (AP/Rick Bowmer)
--

Catherine Lane is the pseudonym of an Open Salon blogger. A longer version of this piece originally appeared on her Open Salon blog. Do you have a story about being unemployed during the Great Recession? Blog about it on Open Salon -- and we might publish it on Salon.

It comes up all the time in conversation. Most recently, I heard it from a stranger at the dentist’s office, talking back to the television news and those of us fortunate enough to be stuck in the waiting room with her. “High unemployment, my ass. Just a bunch of lazy people looking to sit on their sofa and watch TV while we pay their bills.”

Sorry, lady. You’ve mistaken me as a responsible, upright citizen. Allow me to introduce myself: I am a former sofa-lounger, and now I qualify as something even lower than that.

My last full-time job ended in January 2009. Everyone at our small pharmaceutical marketing agency received an email invitation to a mandatory staff meeting. And, much like a bad reality show, it was only moments before the scheduled time that we began to realize we weren’t all invited to the same room.

Along with more than 30 colleagues, I got voted off the island.

Those lucky enough to receive invitations to the other room were told to take a long lunch while we poor saps cleared our desks.

I spent the first several weeks in a daze. There is not a lot of room for pride when you’re a single mom, so I filed for unemployment benefits. And in the height of irony, I was told I wasn’t eligible for food assistance because my income was too high.

That's right. My unemployment benefits pushed me over the income bracket.

I spent that first year sending out resumes and supplementing my unemployment checks by buying designer clothes at thrift stores and reselling them for cash.

After 51 jobless weeks, I finally landed a contract position. Income! No benefits, but income!

It started out great. I worked; I got paid. Not the life-fulfilling work I’d hoped to be doing in my late 30s, but it was money. No complaints.

For a while, life was good. I married the wonderful man I’d been dating for several years. We bought a house. Saved money. My kids got to take after-school classes. All we needed was the golden retriever, and we would be living the American dream.

But all good things must come to an end. By law, once you’ve used a contractor for 18 months, if the need for a position is still there, you don’t need a contractor. You need an employee. So you have to let the contractor go and create an actual job.

But creating jobs is expensive, so there are a few loopholes that corporations can exploit to avoid those costs. The company can boot the old contractor and bring in a new one to do that very same job. Or the company can change the contractor's employment status, which means the clock can run indefinitely. I got Door No. 2. Lucky me.

For my first year and a half, I'd been paid as a W-2 employee by the staffing agency who hired me. But if I became a 1099 contractor, we could continue business as usual. The company didn’t have to train a new person; I didn’t have to find another position in a terrible economy.

My new status meant I billed the company directly, and I paid my own payroll taxes. The company managed to dodge the expenses of creating a job, and got to pocket the placement fee the agency previously added to my hourly rate.

But I still had a job. And, like many contractors, I was so glad to have work, I was willing to put up with almost anything.

Because large international companies don’t live by the same rules as the rest of us. When your annual revenue is north of $20 billion, a piddly little $30K debt to an insignificant editor is so inconsequential … well, I’ve already used more words than it warrants.

I reminded. And cajoled. And begged.

Nothing. Except a steady flow of work assignments that needed to be completed.

A few days before Thanksgiving, it dawned on me: If I’m not getting paid, it’s not a job. It’s volunteer work. And that’s not what I signed up for.

And yet, I still naively believed that, given the opportunity, people would do the right thing. So I told my employers that I was not available for work until they paid me.

To say they laughed in my face would suggest that I was more than an insignificant speck of dust.

So here I sit.

I can’t remember what it’s like to weigh a potential job in terms of whether I’d enjoy it. And I’m actually a pretty good catch. I have a college education. And skills. I’ve even won some awards. It’s all right here on my resume. I can forward it to you, if you’d like.