Pick of the week: A spectacular Cuban-jazz love story 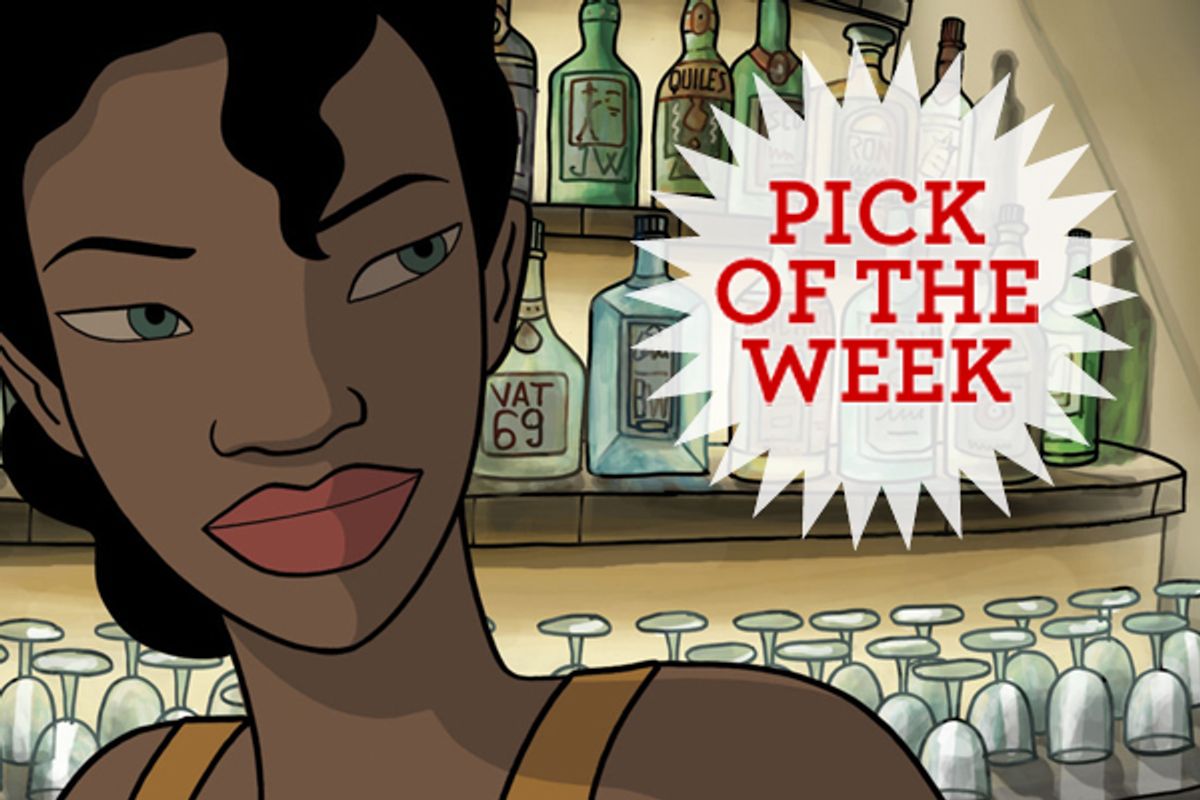 A dazzling and delightful work of modernist animation, a classic movie romance and a hip-swinging, finger-popping tale of musical revolution, "Chico & Rita" is the first big serendipitous surprise of 2012. Like a lot of other people, I saw this title on the list of Oscar-nominated animated features and gave a baffled shrug. I'd barely heard of it: A movie about Cuban jazz, co-directed by Fernando Trueba, a Spanish filmmaker who won a foreign-language Oscar in 1993 for "Belle Époque," the erotic roundelay that helped bring Penélope Cruz to international stardom. It sounded, you know, somewhat interesting, a niche film, perhaps a bit educational and spinachy.

Well, I'm here to tell you that the niche for "Chico & Rita" includes you, if you are interested in music or art or movies or love. Or, for that matter, in Havana or New York or Las Vegas or Hollywood or Paris, the cities captured with such verve, passion and style by Javier Mariscal, the well-known Spanish designer and artist who crafted this film's visual universe. (Mariscal and Trueba co-directed "Chico & Rita" with Tono Errando, who is Mariscal's brother.) Balancing the tropical primary colors of pre-revolutionary Cuba with a wintry, neon-flavored vision of bebop-era Manhattan, "Chico & Rita" is an ecstatic musical and visual celebration, taking its cues from Gauguin and Picasso in one direction, from Dizzy Gillespie and Tito Puente in another.

I should tell you straight out that "Chico & Rita" isn't for kids, unless your kid is a sophisticated character who has the birds-&-bees stuff down, and a worldly view of human passions to boot. That's almost too bad, because there's so much 20th-century cultural history, and so much pure delight, packed into this 94-minute package. But this is an animated movie that features abundant nudity, sex, betrayal, moral cowardice and heartbreak, along with a supremely romantic conclusion that left me weeping in the dark. I'm pretty sure I wasn't alone, because the press screening I attended broke into spontaneous applause during the closing credits (and that pretty much never happens).

There's another creator of "Chico & Rita" who's just as important as the three directors, and that's Cuban pianist and bandleader Bebo Valdés, a major figure in Cuban pop and Latin jazz whose career was recently revived after a long exile from both music and his homeland. (His son, pianist Chucho Valdés, is arguably even more famous.) Still vigorous and still working at age 93, Valdés has composed and arranged a dynamic soundtrack that embraces the rhythmic Cuban pop music of his youth -- especially the mambo and the batanga, which was his invention -- and also the extraordinary moment of fusion when Afro-Cuban music entered the New York-centric, African-American world of jazz.

Valdés has made two previous films with Fernando Trueba, the Latin jazz documentary "Calle 54" and the concert film "Blanco y Negro," which captured Valdés' collaboration with flamenco singer Diego El Cigala. It's reasonable to assume that the character of Chico (voiced by Eman Xor Oña), whom we first meet as an elderly Havana shoeshine man who hasn't played piano for years, is drawn from his biography. (Valdés has actually lived in Europe since the early '60s, but only resumed his musical career in 1994.) From there we leap back to the late '40s, when Chico is a brash and handsome young piano player from the hinterlands who arrives in Havana planning to set the town on fire. When Chico and his best friend Ramón (Mario Guerra) first lay eyes on fast-rising singer Rita (voiced by Limara Meneses) they understand right away that she's the musical talent, as well as the eye candy, that they need to strike it rich. Chico is obviously smitten on a more personal level as well, but Rita -- a city girl used to, um, "dating" visiting Yanks --wants nothing to do with this small-town hick. Until she hears him play.

Chico's piano playing is handled by Valdés, of course, and Rita's singing is done by the marvelous Cuban singer Idania Valdés (no relation, I believe), who turns the schmaltzy Mexican pop hit "Bésame mucho" into a smoldering torch song. Bebo Valdés really was the house bandleader at Havana's swanky Tropicana Club during the years before the Cuban revolution, and I think we can assume that the wide open, musically fertile and almost Darwinian atmosphere captured in the film is true to life. The night when Chico and Rita become lovers is one of the steamiest, and most romantic, sequences in the history of animated cinema, and the pain of young love improperly nurtured is acute.

If the screenplay by Trueba and Ignacio Martínez de Pisón follows a familiar "Star Is Born" trajectory -- boy gets girl, boy loses girl; their careers take off in different directions yet we know they will meet again -- the images are so inventive and the music so magical that it all feels new. You certainly don't have to be a jazz aficionado to appreciate "Chico & Rita," but fans will find treasures inside treasures here: Jimmy Heath playing tenor sax "as" Ben Webster, Michael Philip Mossman playing Dizzy Gillespie, Germán Velazco playing Charlie Parker, Amadito Valdés as Tito Puente and Freddy Cole impersonating his far more famous brother, Nat.

Lured by the almighty Yankee dollar, and by the musical revolution known as bebop, Chico, Rita and Ramón all make their way from the vibrant, horizontal warmth of Havana to the forbidding, vertical and almost monochromatic landscape of New York. As famed percussionist Chano Pozo -- whose recordings with Gillespie launched the Latin-jazz fusion -- warns them, Cubans in New York faced a double whammy, being both blacks and Spanish-speaking immigrants. There were other hazards too; Pozo himself died in a Harlem bar fight in 1948, supposedly after buying a bag of low-grade marijuana from his assailant.

While Chico becomes a prominent pianist on the jazz circuit, Rita becomes something much bigger and less stable -- a celebrity, a Latin bombshell packaged to the public as a star of Broadway and Hollywood and Vegas showrooms. (Like Sammy Davis Jr. and Harry Belafonte and other black stars of the period, Rita discovers that she can perform at the big Las Vegas hotels, but can't stay in them.) How long can a black girl from Havana keep on driving pink Cadillacs and dating rich white guys? And when fate throws Chico and Rita back together, and they set a date for a Vegas wedding, why doesn't he show up?

I don't think Rita is based on any one real-life figure; it's true that Valdés spent several years as pianist and arranger for Tropicana headliner Rita Montaner, but she was almost 20 years older than him, and died in 1958. Valdés emigrated from Cuba in 1960 along with singer Rolando La Serie, his friend and frequent collaborator, and married a Swedish woman after moving to Stockholm. Arguably the film's Rita is a fantasy woman, but it's a fantasy of the best and most beautiful kind, infused with the passion and tragedy of the Cuban experience. "Chico & Rita" is a big and glorious love story, with only a few glancing allusions to politics. But along the way it argues that Cubans have given the world -- and American culture -- so much, and have only suffered for it. Isn't it long past time for Americans to end our bizarre policy toward that beautiful island?

"Chico & Rita" opens this week at the Angelika Film Center in New York, with wider national release to follow.