The man who could beat Chavez 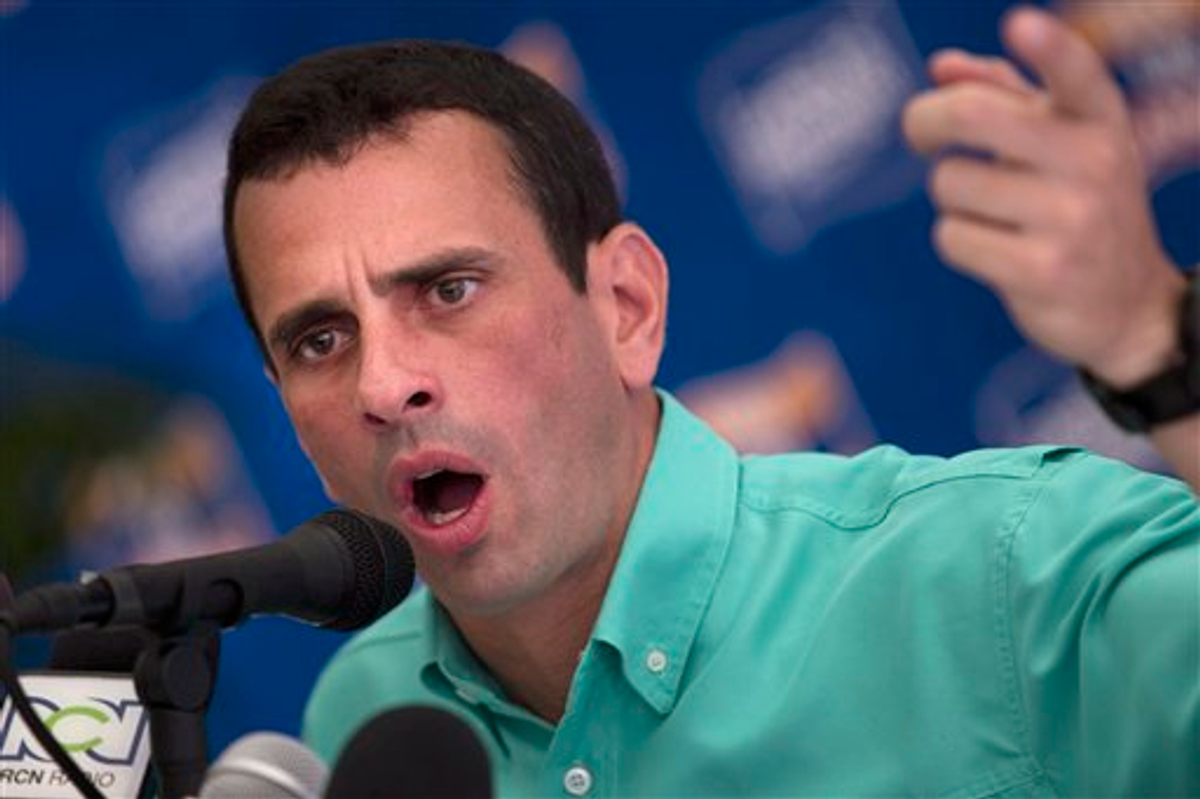 MAIQUETIA, Venezuela — An hour’s drive from Caracas, thousands of people gathered in this coastal barrio at Venezuela’s national airport, which was recently given the dubious honor of being the worst in Latin America.

Clad in blue T-shirts and waving tiny red, yellow and blue flags, the lively crowd sang and danced, waiting for the arrival of the man who is the first serious threat to President Hugo Chávez in his 13-year tenure.

Henrique Capriles Radonski is the frontrunner for primaries due to take place on Sunday, in preparation for October’s presidential election.

For the first time in its disjointed history, the opposition he is about to command has finally united to take on the socialist president.

When he arrives, el pueblo — "the people," as Chávez affectionately calls them — crowds around him.

The 39-year-old Capriles has risen up the political ladder in Venezuela over the last decade, once a mayor and now governor of the country’s second-most populous state, Miranda.

This gives him credibility among those he is trying to woo.

“He’s young, but he comes with experience,” gushed Theresa Carinero, 56, clad in a T-shirt and bandana emblazoned with the candidate’s name, and waving his flag.

Capriles’ support comes largely from people like Carinero, which offers him an advantage over previous opposition candidates.

Former competitor Leopoldo López, who has thrown his support behind Capriles, won the backing of wealthy expatriates, but largely neglected voters at home.

López in 2008 was banned from political office on a corruption charge that never went to court. He denied the allegations and took his case against the Venezuelan state last year to the Inter-American Court of Human Rights, which overturned the ruling. But Chavez’s government declined to honor it.

In the awkward position of being able to stand for elections but not hold office, López shifted his considerable momentum to Capriles just two weeks ago.

At the rally in Maiquetía, Lopez flanked the main man as he greeted the throngs of supporters.

“It's not sufficient to just talk about the problems,” Capriles told GlobalPost. “We have to fight against poverty.”

Capriles has based his campaign on improving education, which he sees as a long-term solution to the country’s insecurity and deep poverty. Capriles’ methods are not to shout down Chávez — indeed, he praises many of the president’s ideas — but to change things little by little, on a case-by-case basis, he said.

But it will be extremely difficult, if not impossible, to unseat El Comandante, as his supporters know him. Chavez has been in power for 13 years. And with world oil prices pushing $120 a barrel, Chavez, head of an oil-rich state, has a full campaign war chest. This week, Venezuela’s state oil company reported a 35 percent increase in profits last year.

The president also remains very popular, largely because of the vast number of social programs he has put in place, funded by Venezuela’s vast oil wealth.

According to recent figures from local polling firm Hinterlaces, Chávez is bathing in an outstanding 64 percent approval rating.

Housing, health and other programs have been the cornerstone of Chávez’s tenure.

Critics charge the programs offer only aid, and no new vision for the future. “Why doesn't Chávez propose a real solution, rather than fixing the odd house just for publicity?” said 24-year-old Yesman Utrera, speaking in his own barrio in the east of Caracas.

He added: “Everyone has a friend of a friend who's been helped by the government.”

It was a severe lack of wealth distribution that helped bring Chávez to power in the first place.

While Chávez was studying at Caracas’ military academy in the late '80s and early '90s, Venezuelans were growing increasingly disaffected with the authorities, pocketing all the oil wealth while bringing neo-liberal reforms to the masses. Chávez capitalized on the disaffection with his 1992 coup attempt against then President Carlos Andrés Pérez.

Despite ending up in prison as the coup failed, Chávez became a national hero, personifying the struggle against a corrupt elite. This would carry him to the Miraflores presidential palace six years later.

Venezuelans haven’t forgotten the Perez regime. Pablo Perez, who isn’t related to the former president, has campaigned under that old party’s banner. But he is still tainted by association. “Pablo Perez isn't going to win the primary because he's from the AD,” said Carlos Romero, a political analyst working at Caracas’ Central University of Venezuela, referring to the party’s Spanish initials.

“I’m not part of the old establishment,” Capriles said. He also takes pains to distance himself from any U.S. connection. Though he is fluent in English, he is reluctant to speak the language on camera, pre-emptively parrying attacks from Chávez on any sympathy for the “Yankee empire,” as the president describes Washington’s domain.

Lula, as Brazilians affectionately know him, has come to represent a more moderate Left, able to support the poor while also working with business and Washington — a shift from men like Chávez and Fidel Castro in Cuba, who position themselves as being against the West.

Lula managed to unite a free market economy with social projects which have given concrete aid to the poor. Brazil is now the world’s most powerful emerging market and Lula is considered responsible for this and the country’s 7.5 percent GDP growth in 2010.

Capriles’ admiration of Lula is evident in social projects in Miranda, the state which Capriles currently governs. For example, he’s sponsored cooking lessons for the poor to help them set up small businesses, in direct imitation of Lula’s Hambre Cero (Zero Hunger) projects in Brazil.

Ultimately, it is popular support through projects such as this that will win it for either Capriles or Chávez in October.

“I wish Chávez a long life,” said Capriles, referring to the president’s cancer scare last year, “so that he sees the change that is coming.”