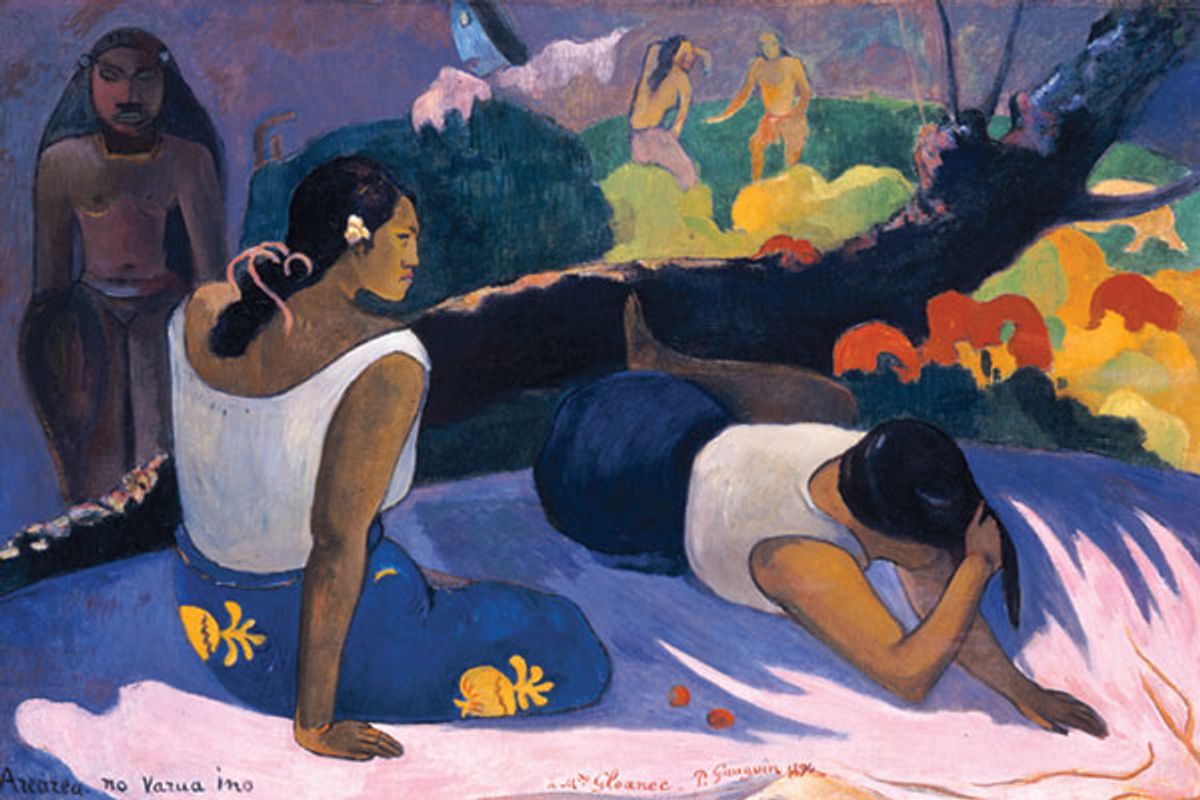 The sun-dappled scenery and boldly beautiful figures native to some of Gauguin's most famous Polynesian paintings are only half the story: That's the thesis of an innovative exhibition currently making its only U.S. touchdown at the Seattle Art Museum.

"Gauguin & Polynesia: An Elusive Paradise" seeks to broaden our understanding of the artist's exotic works through physical -- rather than merely textual -- explication. By allowing Polynesian art and artifacts equal exhibition space with Gauguin's own creations, the show promises viewers an unprecedented aggregate understanding of this key moment in the artist's career.

In separate interviews, Seattle Art Museum curators Chiyo Ishikawa and Pam McClusky -- experts in European and African and Oceanic Art, respectively -- discussed Gauguin, his Polynesian voyages, and the value of integrated exhibitions such as this. Click through the slide show for a preview.

What is the idea behind this exhibition? What makes it different from other showings of Gauguin's work?

Chiyo Ishikawa: No exhibition or study has taken on [Gauguin's Polynesian works] in a full-blown way, as this one does. The goal of the exhibition is to understand this particular aspect of his career more fully. Gauguin was always drawing from a whole range of traditions -- but nevertheless, there is a significant role that the Polynesian material plays in his work, even before he goes [to Tahiti].

An essay in the exhibition catalog proposes that Gauguin actually saw Polynesian material for the first time earlier than we thought, around 1884-85, when he was living with his wife in Denmark. This was after he had lost his job; he was trying to make his living in another way. They ran out of money and moved to Denmark, where her family was from. One of the things he did there was visit the national museum, which is sort of a museum of natural history and ethnography. They had an exhibition of pan-primitive art that included material from New Zealand and from Polynesia; we know that he went [to see it]. And so that is probably the first time he saw [Polynesian material] before he had the specific idea in his mind to go to Tahiti. The idea was further solidified after Gauguin visited the 1889 World's Fair in Paris, which had an individual Tahitian pavilion, and numerous works of art from Polynesia, which he saw and then incorporated after he'd actually been in Tahiti.

Pam McClusky: In some regards, art museums and curators tend to be segregated by specialization -- so that European painting specialists, like Chiyo, and African and Oceanic Art experts, like me, never intersect. But artists do intersect, and they have for centuries. And so this is a chance for us to look at it a bit more through the artist's eyes. To be able to put Polynesian art out there in conjunction with Gauguin's vision is new, and to present them equally is new ... Other exhibitions may reference Gauguin's interest in Polynesian art, but it's treated as an art historical footnote rather than a really thorough experience. We're delivering on the notion that it is very helpful to look through an artist's eyes, and see how he or she can draw from things in ways that surprise you.

What did the idea of "the exotic" mean to Gauguin? Where did he get the idea of it that he had, and when he was in Polynesia, did it live up to his expectations? My understanding is that it didn't -- but he may have depicted it as if it did anyway.

CI: This is a very complicated question that's at the heart of Gauguin studies. I'm not going to formulate an exact answer, but I will put some things out there.

One of the things I've come to realize as I've been working on this is that the period of stability that Gauguin had as he was working in the stock market and building a family and building a collection and starting to paint -- that was about a 10-year period that was an anomaly in a life that was full of travel and searching. I think [traveling] was a fundamental part of his personality; he was taken to Peru when he was around 1 year old, and lived there for seven years (his maternal grandmother was Peruvian), and then at 17 he joined the merchant marine, and immediately after that he joined the navy. He had sailed all around the world; he was unusually well-traveled for anybody today, let alone someone from the mid- or late-19th century. I think that there was something in him that always knew that if he was dissatisfied with something here, there must be something else out there.

Gauguin's family and friends always talked about him as an eternal optimist. I think that was part of what fueled him too: the idea that "this might not be working out, but over there, it's going to be great."

The first time Gauguin goes to Tahiti, I think it's a fairly conventional romantic quest for the exotic -- for a more pure kind of society. He went there with a government grant to document the customs and people of Tahiti, and so in some of his work from that first period, there is a kind of -- I don't want to say "journalistic" quality -- but there is a kind of effort to communicate routines of daily life, or what a village looks like -- that kind of thing. After a little while, he leaves that behind (it isn't very natural to him anyway), and he goes back to his idea of dreaming in front of nature, and creating a synthesis that makes an interesting painting whose colors are maybe unnatural but feel right to him.

Then he goes back to Paris for two years, because he wants to regain his footing in the art world, and he has numerous disappointments. Not many people are buying his paintings; he gets good reviews, but it's just not finding a market. Then he breaks his ankle, and he gets syphilis, and he's estranged from his family, and all these other things ... And so he goes back to Tahiti with a vengeance, vowing not to return. That's interesting to me because then I think it's less a quest for the exotic, and more just looking for a hospitable place that doesn't have the baggage that his life in Europe does. However, after he's been there for about six years, he is still questing, and ends up in the Marquesas Islands.

Was Gauguin sending work back to Europe the whole time he was away? Does he always keep on eye on the European art market?

CI: Yes, he does. ... He definitely wants to be part of the artistic dialogue that is going on in France; he wants people to see his paintings. He's writing to people about his work, and he's very much keeping track of what's going on in the art world -- he knows that younger people are coming up and he doesn't want to be usurped, which is why he goes back eventually. I mean, it's the bane of his existence that he's not making a living as an artist. It's the constant refrain, once he becomes a full-time artist, is that he's not appreciated enough. Unfortunately, that appreciation didn't come until after his death.

Do you have one or two favorite items that are in the show?

PM: [One] favorite is the Maori house-post. It has a man standing, and his two hands are each three-fingered (that's an indicator that he is an ancestor); he has red sealing wax in his eyes, and his body is tattooed in a very kind of signature way. It is so compelling. Part of what I think is invested in that work is the memory of having the Maori courier come [to the museum] and introduce us to this figure. He played four instruments, and told us about who this ancestor was -- that he was a living presence, that we're to talk to him every day -- and we all had to shake this courier's hand and touch noses with him, to sign our commitment to take care of his relative. The whole encounter with this courier reminded me that we're cultural activists, but sometimes we get caught in the more corporate model of business-like demeanor. This was an eye-opener, reminding us that these things came from -- and are still cared for by -- indigenous cultures who have something to teach us about how attached you can be to artwork.

"Gauguin & Polynesia: An Elusive Paradise" will be on display at the Seattle Art Museum through April 29, 2012.