Taking sex out of the city

We lead R-rated lives. So why are so many cities -- even New York -- declaring war on adult entertainment? 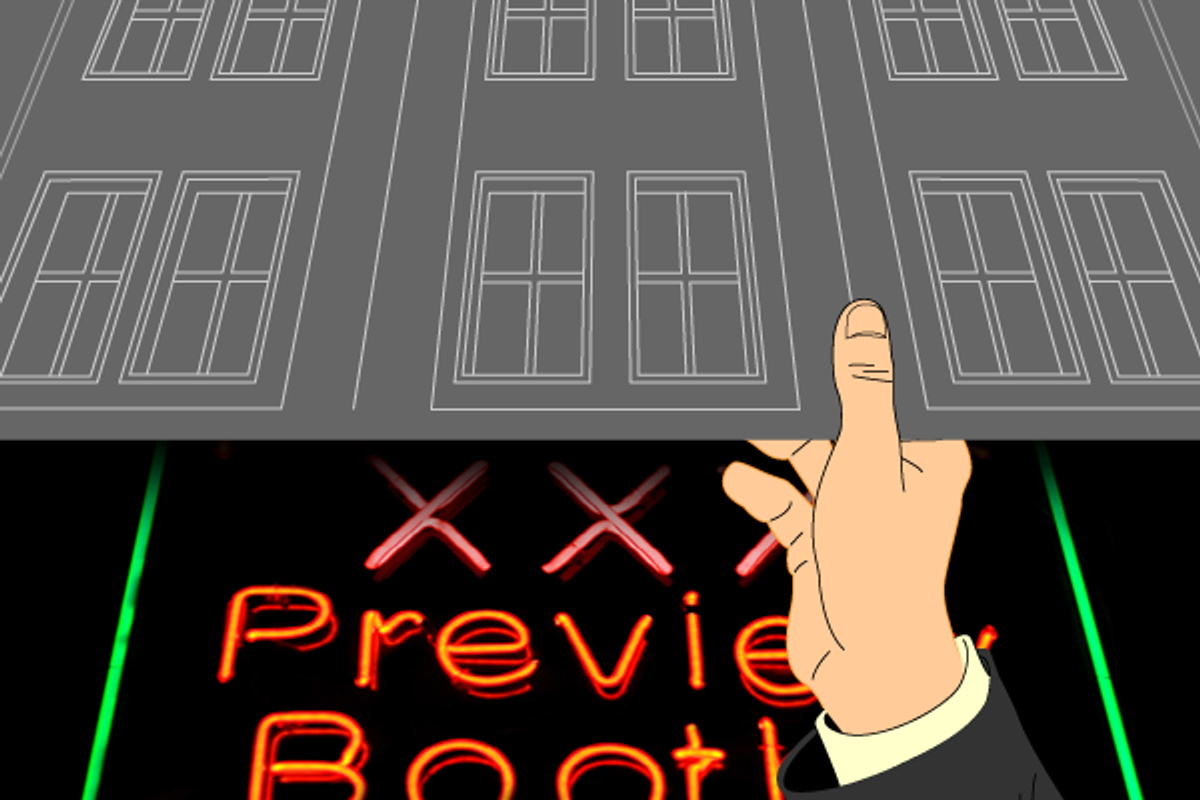 Where once there were peep shows, now there's a W Hotel.

The last two remaining strip clubs in Boston's notorious "Combat Zone" may soon host their final lap dances, says Boston magazine. The neighborhood, once a garish carnival of smut, has fully upscaled. The newest hot spot is a swanky bar at the W that actually boasts design touches paying homage to the street's bygone sex dens.

The fact that we have the luxury of entertaining that question shows how orderly cities have become. "Now we've got great places where you can plug in your computer," quips Josh Alan Friedman. As a journalist in the '70s and '80s, Friedman covered Times Square. "That type of lawless, sexual Wild West, a lot of people miss it. It was renegade, almost like a political statement."

Governments don't like renegade political statements. So, since sex-oriented businesses are protected as free speech, cities have increasingly turned to zoning and draconian regulations to disperse them -- and sometimes to make operating them more trouble than it's worth. "People say, 'Hey, it's adult entertainment, do anything you want to them. Regulate the hell out of them," says Angelina Spencer, director of the Association of Club Executives, an adult-nightclub trade group. "But you have to think about the ramifications for that. We're on a slippery slope."

Spencer cites a new Missouri law that bans alcohol and strip clubs, sets closing time at midnight (prime time for adult entertainment) and makes it a crime for performers to come within 6 feet of a man. Last month, the New Jersey Supreme Court ruled that towns can restrict smut simply because it's accessible close-by in New York. And last year, Louisville, Ky., banned nude dancing citywide, a move that could end up before the U.S. Supreme Court.

"Welcome to another dreary winter's day in your newly nudity-free city," moaned LouisvilleKY.com. "This is not the America my dad grew up in," declared the local blog Louisville's Strange Brew.

There's something about the death of urban tawdriness that gives some people existential agita. It's been happening ever since VCRs turned every living room into the Pussycat Theater, dragging sleaze off the streets with an assist from politicians and developers. It's bubbled up through the resurgence of titty-tassled neo-burlesque shows, scattered attempts at porn-theater preservation, a "Deep Throat" documentary, and dewey-eyed paeans to the bad old days. The Times Square visitors center even recently installed three genuine peep booths, complete with the refurbished neon "Peep-o-Rama" sign from the neighborhood's last peep emporium, shuttered in 2002.

Of course, you won't see nudes in those peep booths. Instead, you'll feast your eyes on New York Times articles chronicling the neighborhood's transformation. Like the bar at the W, it offers a stylized approximation of the scummy experience, without the weird smell. Or, from another perspective, makes "a mockery of what New York City is supposed to represent," according to the New York Observer.

But what New York and other cities represent, sex-wise, isn't so cut and dried. While the sticky-floor triple-X joints have declined, chains like Babeland and the Pleasure Chest have thrived, selling high-end dildos and in well-lit shops to a very different clientele. Yelp reviewers draw a stark line between "sex-positive" establishments like the Smitten Kitten, a sex-toy boutique in Minneapolis, and the "neon-signed sleaze-baskets, where you kinda feel you could catch something just by browsing." As urban amenities of all types have upscaled, from gyms to coffee shops to cupcake emporiums, so too have sex stores, offering a gentler experience at a premium price.

These venues provide a valuable service, especially to women. They're not degrading or leering, and they preach the gospel of sexual progressivism. But they also emphasize how startlingly appropriate our cities have become, at least outwardly. When we say we miss the old sleazy neighborhoods, we're not really mourning the sex, which was always for a small number of men anyway. We're talking about exactly what the respectable sex shops can't offer: bawdy distastefulness, throngs of misfits, an unapologetic lack of decorum. These were zones where dysfunctional behavior was embraced. "I used to think of it as a loner's paradise," says Friedman of Times Square. "You could be all alone and yet you were in the midst of this teeming humanity."

Jonathan Tudan, who lived in the Combat Zone in 1969, says there was "an excitement about it. The minute you stepped onto Washington Street you got a jolt of electricity." These neighborhoods represent a particular fantasy of city life, one where you need to be streetwise to survive. "I learned not to be intimidated by anybody," says Tudan, who moved to the Combat Zone an 18-year-old virgin from Connecticut. He managed an apartment building there, living rent-free among the sailors and prostitutes, and occasionally scuffling with johns. By the time he moved out, he had the respect of the street and was dating one of the top strippers in Boston.

Old photographs reflect this fantasy: sneering kids drinking in cars, wild-eyed preachers screaming about Jesus, suggestive titles on blazing marquees. Times Square looked like an awesome nightmare. Why did people go there? "Why do people go to horror films?" asks Anthony Bianco, author of "Ghosts of 42nd Street." "Because it transcends ordinary experience." Friedman echoes that: "For me, it was like going through the looking glass. Times Square was a world that was upside down and in another dimension." It was bizarro Disney, a fabrication that existed in the imagination as much as it did in real life. "The grim actualities of the Deuce in the 1980s seemed to matter less than the idea of it as the ultimate antistreet," writes Bianco in his book.

The sex-oriented businesses that are succeeding in cities today do exactly the opposite. They bring sex down to earth, demystify it and make it easy to explain and digest. There are his-and-hers oral-sex seminars and intimacy-inspiring yoga classes. There are trained professionals on hand to help you decide which butt plug is right for you in a totally non-sleazy way.

And there are strip clubs: Costco-size franchises like Scores and 4Play, with VIP rooms and valet service. There are pole-dancing classes and strip-tease lessons. And there's the new burlesque scene, which is more like a pantomime of an old-timey art form than what we normally think of as sexual. "I've been to the new burlesque places down in the East Village, but the girls are all comedians," says Friedman. "I think it's great what they're trying to do, bring back some of the old burlesque. But they're doing it for a laugh."

Could these two worlds, the old Peep-o-Rama and the new Pleasure Chest, coexist in the same city? Of course. In fact, they do -- there's still plenty of filthy behavior going on. It's just not out in the open anymore. Now sex clubs and orgies are something to find through Google, and prostitution is moving online. But it's hard to imagine unabashed sleaze in concentrated neighborhoods as part of the new urban order. And maybe it shouldn't be part of it. It wasn't all fun and games. "People got hurt," says Tudan. "Most of the folks who actually lived in the neighborhood, they don't miss it." Sex workers, some of them children, endured horrific abuse. And for women in general, these could be mean and outright hostile places. "If these girls had a choice to get a job as a secretary, they would have done that," says Tudan. (You'll notice that all the historians quoted on this topic, both official and armchair, are men.)

But the nostalgia persists. It seems like every time a new Rem Koolhaas tower rises, it inspires, along with the oohs and ahhs, a little wistfulness for the old grunge. "You did not have to actually roll in the gutter to take comfort in knowing it was there," writes Bianco, "affronting bourgeois pieties by its very existence." And if you did want to roll in it, no shame on you.