No, Newt, don't quit to make room for Santorum

Never, ever listen to the National Review 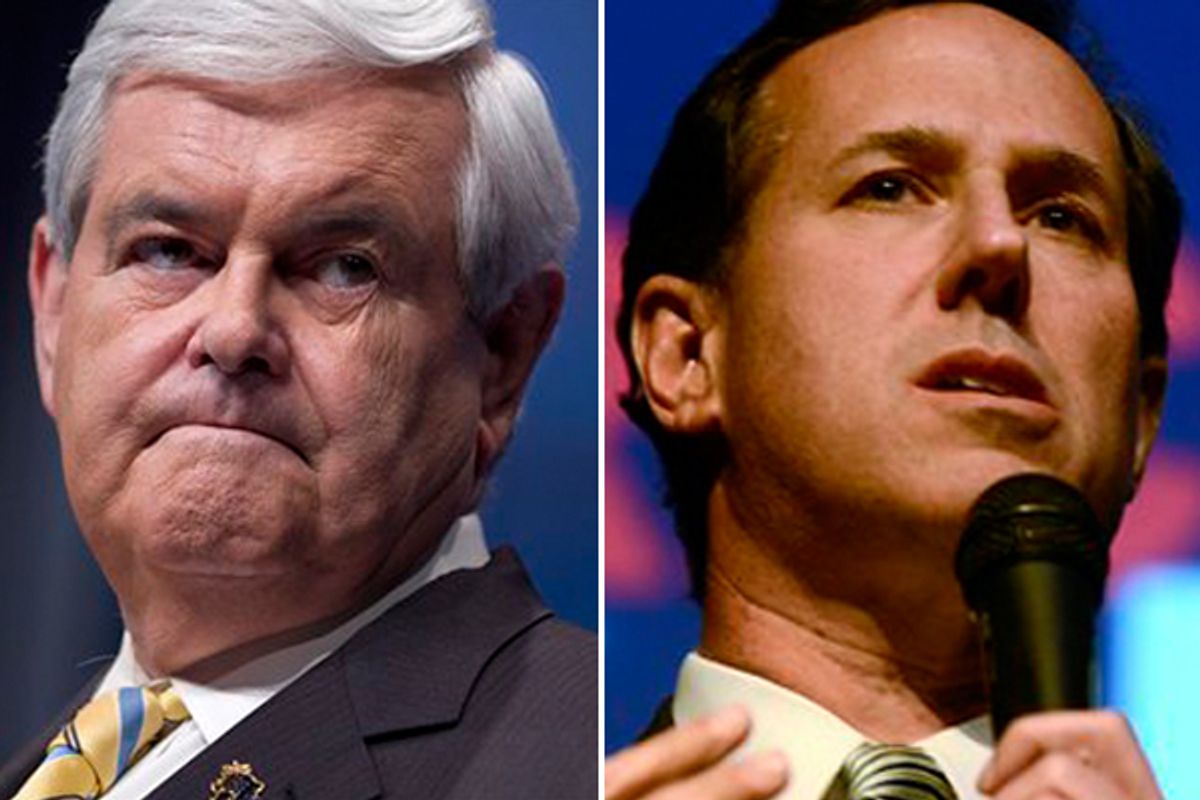 The National Review has attracted some attention today for publishing an editorial suggesting that Newt Gingrich abandon his presidential run in order to allow Rick Santorum to fly free and destroy Mitt Romney. (Ramesh Ponnuru contests the notion that the editorial calls on Gingrich to quit the race but "the proper course for him now is to endorse Santorum and exit" seems pretty unambiguous even if it's prefaced with a reminder that Gingrich told Santorum to do the same thing last month.)

Gingrich should not listen to them. At all. (Not that Gingrich listens to anyone, besides perhaps his wife, but still.) This editorial can be safely ignored for the following reasons:

Second, The Editors don't even have the facts of Santorum's surge correct: As Dave Weigel points out, Gingrich, contrary to The Editors' claims, has won more delegates than Santorum thus far. Santorum has three delegates. Three. The press likes to cover caucuses and primaries even when they're meaningless and non-binding and feature negligible turnout because those are the only actual events to cover in a primary race, but the result is that a couple of random wins are massively over-imbued with supposed import, leading even the politically savvy Editors of the National Review to believe that Rick Santorum has actually won a bunch of delegates because he got some old people into some auditoriums in suburban Minnesota.

Third, there is nothing about the Santorum surge that makes it any more sustainable or solid than all the previous candidate surges, except that it's happening while primary contests are actually happening instead of last September. In other words, a Santorum collapse could be imminent, and it could come whenever Mitt Romney gets around to seriously devoting his attention to destroying him with money. Santorum has a lot of room to be attacked from the right, especially since he's got the Rust Belt Republican politician habit of occasionally sounding sympathetic to working-class resentment of rich people. And his political history is filled with assorted crimes against current fanatical GOP dogma. Weigel posted a good one earlier: An old campaign ad in which Santorum actually admits to loving newspapers.

Oh also something about supporting Amtrak, despite trains being part of the UN plot to destroy American sovereignty.

Finally, there is the fact that Rick Santorum is an unambiguously awful candidate. He is not just a "social conservative," he is a paleolithic anachronism of reactionary thought. The American people, despite the fervid wishes of a couple bishops and Kathryn Jean Lopez, are not actually remotely anti-contraception. Most voters -- especially since the ratification of the 19th Amendment -- think women should be allowed to have jobs outside the home. The last time the Republicans won a presidential election, they had 48% of the female vote, and I imagine they'd like to tie or beat that number this year, maybe? Rick Santorum is decidedly not the man for that job, unless scientists invent some sort of mind control ray that falls into the hands of Phyllis Schlafly.

So, no, Newt Gingrich, don't quit just yet, and I'm not just saying that because having Gingrich around makes a political writer's work marginally more colorful. All Gingrich really needs to remain "competitive" in the media race through Super Tuesday is one more big check from his rich uncle Scrooge McAdelson.

(Not that Gingrich is going to be the nominee! It's still going to be Romney unless something unprecedentedly hilarious happens at the convention.)