A passport to utopia

The satirical NSK State movement was founded in socialist Yugoslavia in 1984. It has now opened four embassies 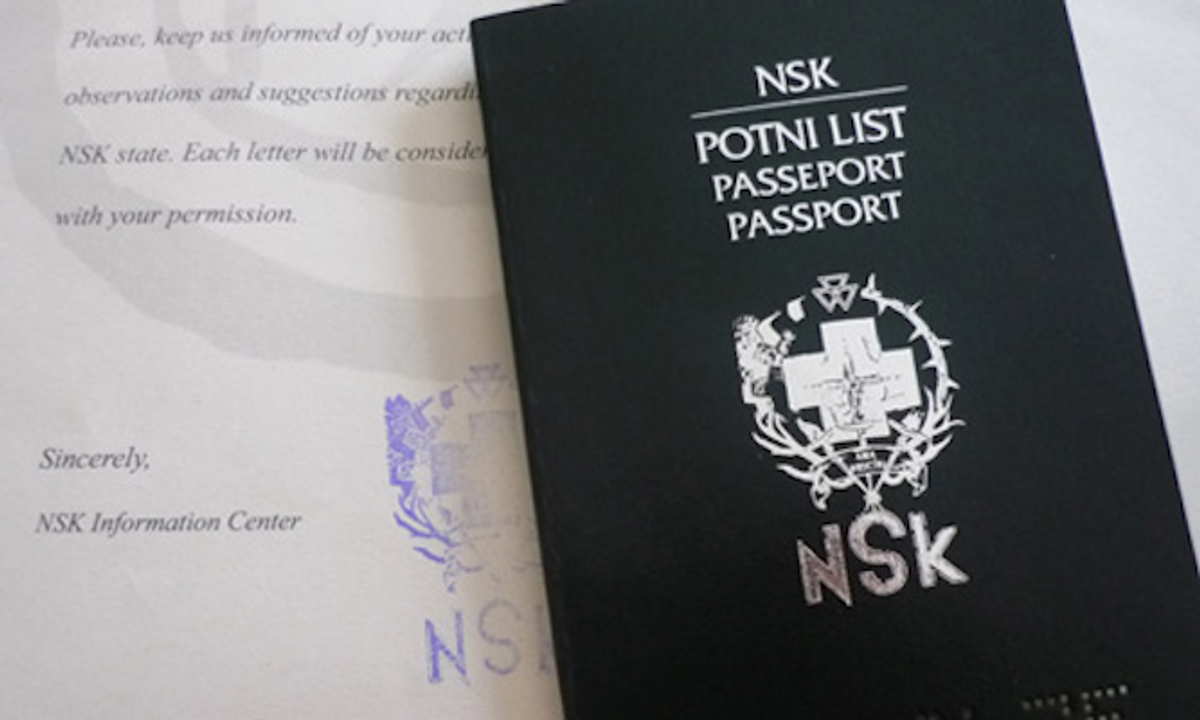 A few years back (2003 to be exact) I wrote a story in Print on The NSK State, created in 1992 by the Slovene arts collective Neue Slowenische Kunst (NSK), which included the groups Laibach, IRWIN, Noordung, New Collectivism and the Department of Pure and Applied Philosophy. Their trope was needle-sharp parody of Communist and Fascist symbols and language.

NSK was founded in Ljubljana in 1984 as socialist Yugoslavia began to return to prewar borders and age-old ethnic disputes. As an art and satire movement The NSK State is conceived as a utopia, which has no physical territory and is not identified with any existing national state. It is inherently transnational and describes itself as "the first global state of the universe." It issues passports to anyone who is prepared to identify with its founding principles and citizenship is open to all regardless of national, sexual, religious or other status. It now has several thousand citizens across numerous countries and all continents.

The NSK State has opened temporary Embassy and Consulate events in  Moscow, Ghent, Berlin and Sarajevo. And earlier this month they issued passports at MoMA (Mezzanine, The Lewis B. and Dorothy Cullman Education and Research Building). MoMA states:

Organized in conjunction with the exhibition Print/Out, Print Studio is an interactive space that explores the evolution of artistic practices relating to the medium of print.

Originally founded by a collective of artists, musicians, and philosophers, the NSK State in Time (Neue Slowenische Kunst) came into being in 1992 shortly after Slovenia’s independence from the Yugoslavian federation. This declaration of existence was accompanied by the issuing of passports at various temporary embassies which operated alongside NSK exhibitions and events. Led by the Slovenian artists’ collective IRWIN, Print Studio will host IRWIN, NSK Passport Office, New York for three days and issue a limited number of passports. A concurrent series of presentations, discussions, screenings and a culminating NSK State Citizens’ Congress offers a forum to engage the public with ideas central to the NSK State and what it means to be a citizen of this state in time.

A limited number of passports will be printed during IRWIN’s NSK Passport Office, New York.

The "Time for a New State" billboard below is in Lagos where approximately 4000 citizens only have NSK passports (Thanks to Mirko Ilic).

Salon is proud to feature content from Imprint, the fastest-growing design community on the Web. Brought to you by Print magazine, America's oldest and most trusted design voice, Imprint features some of the biggest names in the industry, covering visual culture from every angle. Imprint advances and expands the design conversation, providing fresh daily content to the community (and now to salon.com), sparking conversation, competition, criticism and passion among its members.