The bishops go off the deep end

Rejecting the Obama contraception compromise, they display their irrelevance to moral and political dialogue 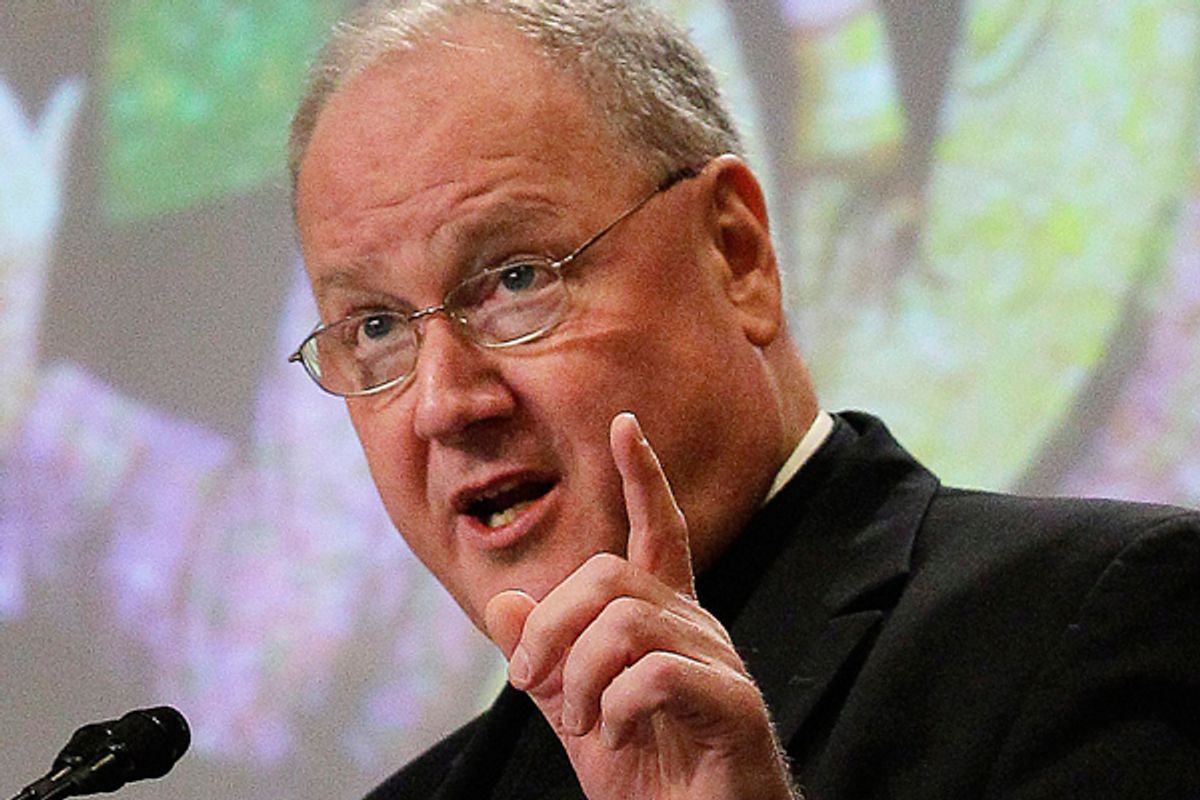 Just as I was publishing my post about Catholic tribalism on Friday, predicting that the brilliant White House "accommodation" on contraception wouldn't mollify the U.S. Conference of Bishops, the bishops released a statement that made them seem, well, mollified, at least a little. The new Health and Human Services regulations were "a step in the right direction," their statement read, and so I softened an assertion that the bishops would continue to wage war against the compromise.

I needn't have soft-pedaled. Only a few hours later the bishops came out, guns blazing, insisting the only solution they would accept would be for "HHS to rescind the mandate for those objectionable services." By any employer, for any employee in the entire country -- a country where the vast majority of voters, and of Catholics, support Obama's stand. And at Sunday Mass, bishops and parish priests throughout the nation read aloud the stunningly political letters about the controversy they already had planned. Now, with the bishops' blessing, Republican are hard at work on legislation that would force HHS to strip the contraceptive coverage requirement for all employers, not just religious employers. Sen. Roy Blunt would allow employers to decline to cover any service they deem objectionable; Sen. Marco Rubio would restrict the legislation to contraception coverage.

I have a couple of reactions to the bishops' extremism. First of all, as someone raised Catholic, I wonder why they've never read letters about any of their social justice priorities: universal healthcare, increased protection for the poor, labor rights, or action to curb climate change? Why does this topic  – not even the morally challenging issue of abortion, but the universally accepted practice of birth control – merit such a thundering reaction from the pulpit?

Second, as an American, I also wonder: How do they continue to demand tax-exempt status when they're railing in their churches about blatantly political – and divisively partisan – public concerns? As the first writer on my remarkably sane Catholic tribalism letters thread remarked, their public support for the extremist GOP position makes me think they should register as a Republican political action committee rather than remain a tax-exempt religious institution outside the bounds of politics.

Even as the bishops became more shrill and extreme, the debate over contraception coverage became smarter and calmer last week. Major Catholic organizations supported Obama's Friday move, including the Catholic Health Association, Association of Jesuit Colleges and Universities and Catholic Charities USA. Before the president's announcement, famed attorney David Boies did the most to usher in the new tone by framing the HHS rules as a matter of labor law. Boies doesn't believe, by the way, that HHS is in any way required to provide the exemption for churches it wrote into its regulations even before the compromise. If the church is employing people, whether co-religionists or not, it has a responsibility to comply with employment law. He proved that even the administration's initial regulations, exempting churches, was a strong attempt at accommodating anti-contraceptive religious groups.

But maybe the best argument on behalf of the Obama administration's position comes from a very unlikely source, as Jay Bookman points out: Supreme Court Justice Antonin Scalia. In two different decisions, the conservative Catholic Scalia has sided with the court majority in finding that religious teachings can't justify religious employers – or employees -- failing to comply with labor law. In the 1990 Employment Division v. Smith decision, regarding an employer's ability to fire a Native American employee who used peyote, despite the employee's claim that using the drug was a religious rite, Scalia wrote:

"We have never held that an individual’s religious beliefs excuse him from compliance with an otherwise valid law prohibiting conduct that the State is free to regulate. On the contrary, the record of more than a century of our free exercise jurisprudence contradicts that proposition." In an even more directly relevant 1982 decision holding that Amish employers must comply with Social Security and withholding taxes, though their faith bars participation in government support programs, Scalia wrote:

Respondents urge us to hold, quite simply, that when otherwise prohibitable conduct is accompanied by religious convictions, not only the convictions but the conduct itself must be free from governmental regulation. We have never held that, and decline to do so now.

I've written repeatedly that my inability to quit the Catholic Church entirely comes from the fact that its social teachings formed my social conscience, and to this day some of the people doing the most good for the poor and the excluded are devout Catholics. But the bishops are impossible to defend. Today, they are working on behalf of the Republican Party. "They have become the Pharisees," says Andrew Sullivan, a conservative practicing Catholic. "And we need Jesus."

I'll be discussing the bishops' GOP politicking on MSNBC's "The Ed Show" at 8 pm ET.