"The Fault in Our Stars" and "There Is No Dog": Not kids' stuff 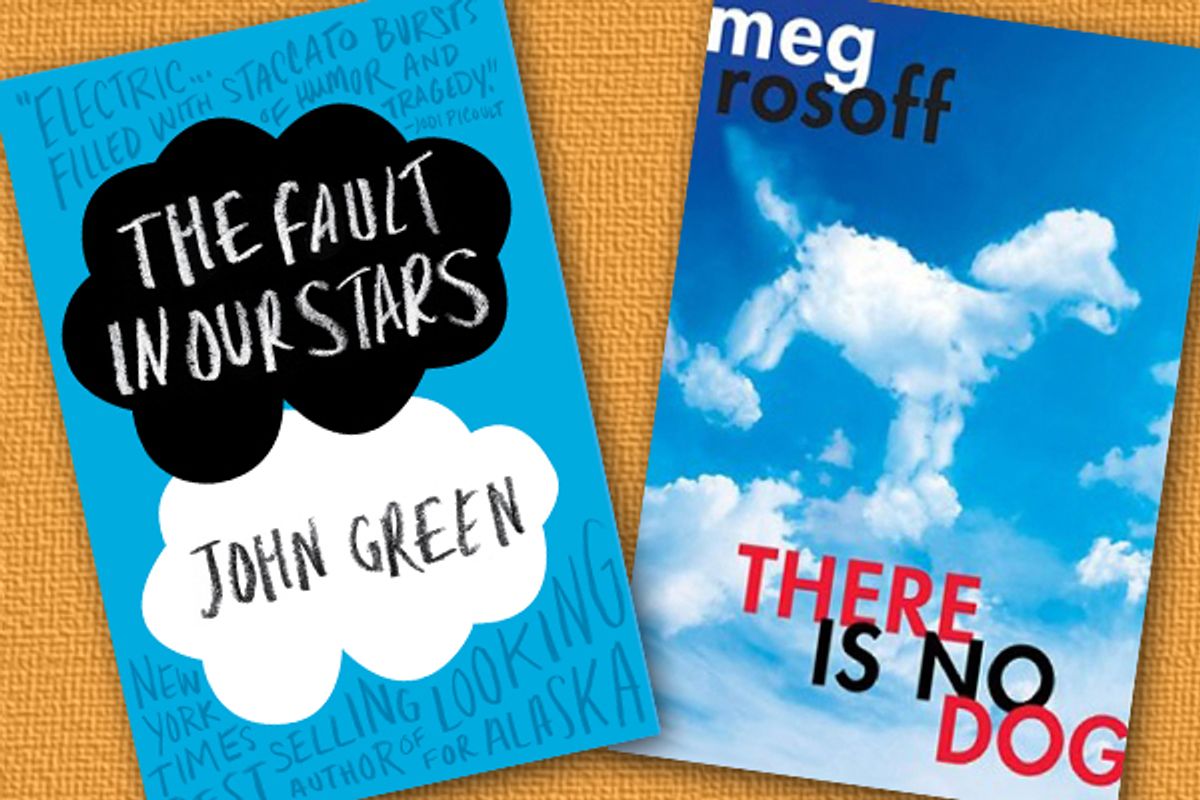 Why should you, an adult, bother with a novel intended for an audience aged 14 to 18? If you're among the ever-growing adult readership for YA (young adult) fiction, you're probably not even asking that question anymore. And no doubt John Green, whose most recent YA novel, "The Fault in Our Stars," became a bestseller on Amazon even before he finished writing it (pre-orders were enabled when he settled on a title), doesn't especially need readers with the legal right to vote. But if you were to skip "The Fault in Our Stars" -- or another new novel, by YA luminary Meg Rosoff, "There Is No Dog" -- because you assume that such books are less intelligent, well-written or emotionally complex than their adult counterparts, you would be most miserably mistaken.

Both of these novels ask questions as difficult as those posed by any serious writer: Why do we suffer, why must we die, and what meaning can be found in any of it? More important, they are not afraid to respond to these questions unflinchingly. These books are often -- very often -- funny, but they aren't frivolous. I can think of a dozen acclaimed contemporary adult novelists who blunder through this territory, wallowing in sinkholes of sentiment, tangling their narratives in thickets of saccharine fabulism. It makes no sense that the maudlin goo that is "Extremely Loud and Incredibly Close" should be classified as a work for adults, when "The Fault in Our Stars," a far more mature rumination on the same themes, is regarded as a children's book. Likewise, why should grown-ups be subjected to the cutesy "The Life of Pi" while teenagers get to revel in an astringent fable like "There Is No Dog"?

"The Fault in Our Stars" is told in the first person, with the sort of fresh, irreverent voice that inevitably gets compared to Salinger's Holden Caulfield. This story, however, comes from a character infinitely more appealing than Holden. Her name is Hazel Lancaster, and she is dying. The thyroid cancer that will eventually kill her is being held in abeyance by an experimental drug, but she still needs an oxygen tank, and she spends a lot of time worrying that she's an emotional "grenade" for her parents. "There is only one thing shittier than biting it from cancer when you're 16," she observes, "and that's having a kid who bites it from cancer." She'd prefer to limit the damage.

And yet, who could help but love her? Certainly not Augustus Waters, a survivor of osteosarcoma with a replacement leg he calls Old Prosty. The two meet at a support group, where they are suitably skeptical about the inspirational mottoes and the covert competition to end up among the 20 percent who'll still be alive in five years. A tender, bookish, wisecracking romance ensues, fueled in part by the couple's shared enthusiasm for a novel, "An Imperial Affliction," Hazel's favorite, yet something she mostly "can't tell people about, one of those books so special and rare and yours that advertising your affection feels like a betrayal."

"An Imperial Affliction" ends in the middle of a sentence, and while Hazel thinks she knows why, she still wishes she could find out what happens to its characters. The author, who has written nothing else, lives reclusively in Amsterdam. The two young people hatch a plan to visit him and extract the answers to Hazel's questions. It's a quest complicated by the difficulty of traveling with oxygen tanks and prosthetics, but enabled by the sort of favors Hazel sardonically refers to as "cancer perks." There will be grenades, but not in the places where you expect them.

The sparkling, satirical "There Is No Dog" extrapolates from a clever premise: If this world -- "not just full of suffering" but "full of perversity, of things that go horribly wrong more or less at random. For the hell of it" -- has a creator, the only deity messed up enough to have made it must be a teenage boy. His name is Bob, and he's petulant, self-absorbed and hormone-addled. Most of the actual work gets done by the middle-aged Mr. B, a put-upon administrative second banana who spends his time frantically trying to limit the damage caused by Bob's moods and negligence.

Bob got punted this job ("miles off the beaten track in a lonely and somewhat run-down part of the universe") by his feckless mother, Mona, who won it in a celestial poker game. His initial efforts at creating light consisted of "fireworks, sparklers and neon tubes that circled the globe like weird tangled rainbows," all of which Bob regarded as "very cool" even though they didn't work. (The functional aspects of the solar system were executed by Mr. B while Bob napped.) Creating humanity in his own image ("one big fat recipe for disaster") is this creator's crowning misdeed and results in a long history of Bob falling in love with mortal women, an emotion whose agonizing ups and downs trigger bizarre weather and other natural disasters. "There is No Dog" begins just as a lovely assistant zookeeper named Lucy comes to Bob's amorous and catastrophic attention.

Rosoff gets an impressive amount of mileage out of what might otherwise seem like a joke. This is largely due to a lively extended cast of characters who include Lucy's mother, the dispirited vicar who pines for her, Mona's terrifying poker buddy and his thoughtful daughter, Estelle. There's also Bob's neglected pet ("I don't ignore him! Just last night I made him bring me some food!") the Eck, an endearingly hapless "penguiny" creature, the last of his kind, in danger of being eaten by Estelle's father.

It's debatable whether Rosoff's shrewd, trim prose might not occasionally fly just over the heads of teen readers. (Lucy's mother is memorably described as "having the air of an expensive pony -- sturdy, alert and well-groomed.") But it's rather thrilling to know that stylists of her caliber have dedicated themselves to writing for young readers, and that it doesn't even seem to occur to her to pander to them. Not much in today's culture inspires hope for the future -- or at least not credibly so -- but I count the knowledge that so many teenagers read and love books like "The Fault in Our Stars" and "There Is No Dog" as one of the bright spots.