As a girl, the late diva's songs taught me about love. As an adult, she showed me about loss and pain 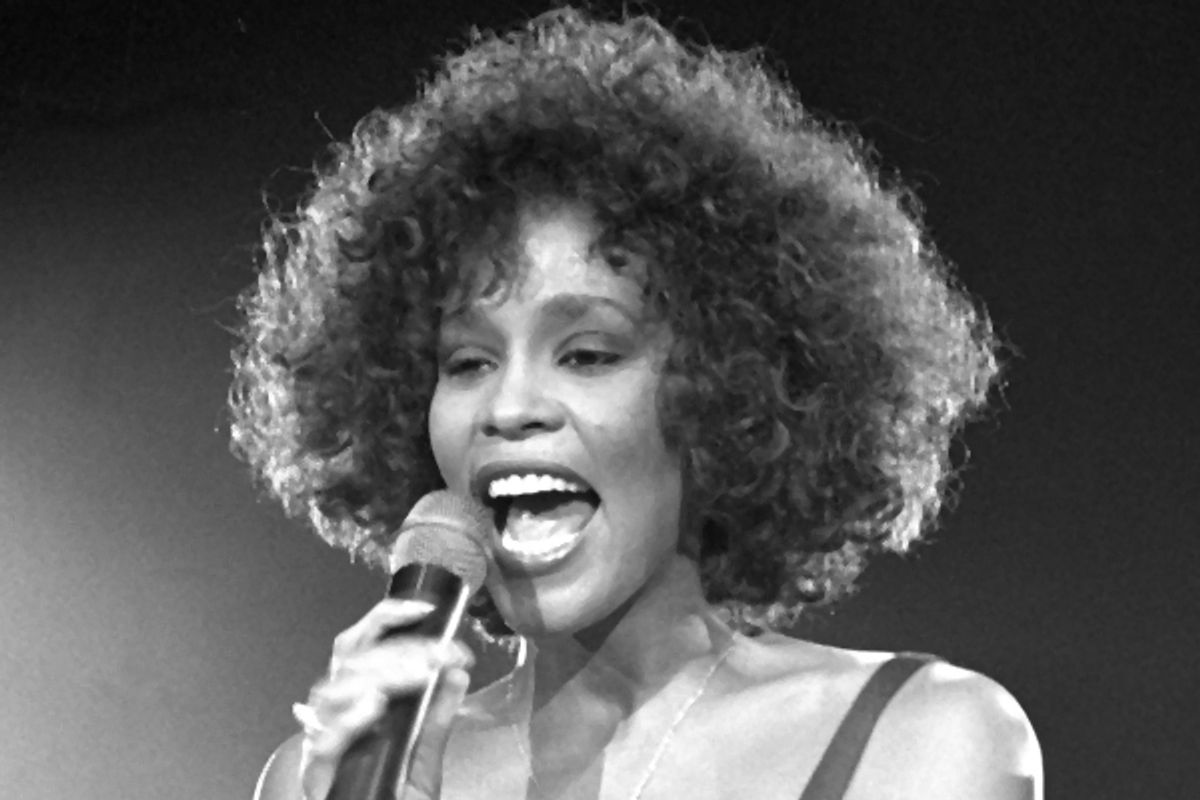 In seventh grade I owned the cassette tape of "Whitney," the second album by Whitney Houston, which was true of pretty much every 12-year-old female in America. I played the hell out of that tape. I used to spend afternoons in my bedroom, lip-syncing those songs to my bedroom wall, because that's the kind of kid I was. Always longing for an imaginary audience. I did not want to be a writer back then, or the president of the United States. I wanted to be a pop star. And in 1987, there wasn't any pop star more elegant or talented than Whitney Houston. Daughter of a gospel singer, cousin of an R&B legend, smashingly beautiful -- she was practically anointed by the gods for greatness.

The song I loved the most on that tape was "Didn't We Almost Have It All." Fourth song, first side. I would perform the song to the wall, then rewind it and perform it again. Play, rewind, repeat. I can still hear the squiggle of the tape in my head as I pressed on the jam-box button just long enough to find the song's opening once more. This is a lost art in the age of the iPod, but back then, knowing how many seconds to rewind a cassette was a sign you truly understood its rhythms. You had literally learned the music backward and forward.

"This again?" my brother would ask as the tinkling synthesizers kicked in. My brother was a metalhead, who loved the righteous anger of AC/DC and Judas Priest and did not give a rip for the likes of Whitney Houston.

He did not get a choice in the matter. Here is how the song begins:

Remember when we held on the rain, the nights we almost lost it?

Once again, we can take the night into tomorrow

Living on feelings, touching you I feel it all again

It's a bit mundane, frankly. It's a fill-in-the-blank tale of a broken relationship. Funny how every love story sounds the same but feels so different when you're inside it. That's the poignancy of love stories, I guess. You're never alone. Then again: You're never unique.

But this song is all about the chorus. It is a song constructed almost entirely of its irresistible chorus -- half a dozen times in less than five minutes -- and the chorus launches a mere 45 seconds in. No foreplay, no footsie under the table, no lingering glances and sighs. This song grabs you by the collar and sticks its tongue down your throat.

It's a really fantastic chorus, by the way. It's OK to sing along:

Didn't we almost have it all, when love was all we had worth giving?

The ride with you was worth the fall, my friend. Loving you makes life worth living.

At 12 years old, I had never been in love. I had never even kissed anyone. And so it's peculiar that I experienced this song so powerfully. The agony. The crashing emotion. The ka-pow of it all. Why did I feel it so intensely? What was it teaching me? I wonder if all these songs of woe and regret didn't warp my sense of romance. I wanted to grow up and fall in love, but more to the point: I wanted to grow up and lose that love, because that's when the real drama began. I understood, even then, the delicious pain of being brokenhearted.

The chorus returns, a little different this time:

Didn't we almost have it all, the nights we held on till the morning?

You know we'll never love that way again. Didn't we almost have it all?

This song climaxes so quickly. Not even a minute into it, and we're already basking in Whitney's vibrato, the glorious burst of sustained sound that would become her signature. The woman could push a note like nobody else, squeeze it and feel it up till the listener wanted to cry for mercy. But when you peak this early, it's hard to know where to go next. The excitement is unsustainable, and for the next three minutes the song will throw out its back trying to one-up itself -- a series of elevated key changes, strings atop swell. The song wants you to know the singer is bleeding.

For the moment, though, it pulls back. Whitney's voice grows subdued. We get more of the back story, which, naturally, is like every back story we've ever heard.

The way you used to touch me felt so fine

Kept our hearts together, down the line

A moment in the soul can last forever, comfort and keep us

Help me bring the feeling back again.

I can understand why people hate Whitney Houston. I mean, these lyrics are dreck. It's cooler to love the big, dirty riffs of Van Halen, the gritty excess of Guns N Roses. But I still find the stadium ballads of the mid-1980s strangely moving. The REO Speedwagon, the Air Supply, the Chicago, the Bryan Adams. The cheesy, lighter-held-aloft songs. They are not clever. They are not sly. They have the temerity to be earnest and unblinking, nothing but a desperate plea to be loved. Like a boyfriend who dims the lights and scatters rose petals in the bathtub. Please, baby, come back to me.

Or, as Whitney Houston sings it:

Didn't we almost have it all? When love was all we had worth giving?

The ride with you was worth the fall, my friend. Loving you makes life worth living

I finally did fall in love in my sophomore year. He was sweet like my father, charming like my older brother. I still adore him. We drove around in his Chevy Nova listening to David Bowie and Elvis Costello. I began to understand that Whitney Houston was bad and not to be encouraged. We made fun of "I Will Always Love You," the No. 1 song that would not go away in 1992, the year we graduated. We wanted to stab that song with knives; we wanted to punish it somehow. We were not the only ones turning on Whitney. That was the year Nirvana hit. Culture was edging away from the light and toward the dark, and there was Whitney in the video for "I Will Always Love You," singing her heart out in the middle of an empty winter landscape as Kevin Costner walked away.

My boyfriend and I broke up at the end of high school, and I secretly bought the cassingle to "I Will Always Love You." I listened to it in my bedroom, over and over. Nothing could touch the pure emotion of that song. I listened to "Didn't We Almost Have It All," too, and it was exactly the comfort I wanted, like pulling an old teddy bear off the shelf and cradling it in your arms as you cried.

Didn't we almost have it all? The nights we held on to the morning?

You know you'll never love that way again. Didn't we almost have it all?

"Didn't We Almost Have It All" is a good breakup song because it grows temperamental. It's not just a lament. It's a bit of a tantrum. It's all so unfair, Whitney is telling us. It wasn't supposed to go like this. We had it all, and then we did not. How could that possibly happen?

Didn't we have the best of times, when love was young and new?

Couldn't we reach inside to find the world of me and you?

We'll never lose it again. Cause once you know what love is, you'll never let it end.

After college, I stopped paying attention to Whitney Houston. I guess a lot of people did. There was a reality show, and crack, and debasement that defied easy explanation. It was easy to shove it off on Bobby Brown -- the controlling spouse, the bad influence -- but she was the one who stayed with him. The reality show made her seem coarse and a little bit mean. When she told Diane Sawyer that "crack is wack," it was like she was participating in her own satire. This was unanticipated. Crack addicts were not supposed to look like Whitney Houston.

The thing is, I've met other crack addicts since then, and they don't look the part either. That might be the one characteristic they have in common, other than an addiction to smoking crack. I never did drugs; I was a boozehound, a pure-bred lush. But I understand that you have to keep pushing to get the same feeling. You level out, and so you need more. You level out again, and you need more again. Play, rewind, repeat. It's not just the crack or the booze that destroys people. It's the always needing more.

I once heard drug addiction described as nostalgia. Chasing the perfection and the abandon of that first time.

Didn't we almost have it all? The nights we held on to the morning.

I was reading a book about Marilyn Monroe when I heard that Whitney Houston had died at the age of 48. Monroe's is the ur-diva downfall, and these tragedies have elements in common: Drugs, a questionable taste in men, the inability to live up to a public persona, success like a rocketship. And they had beauty, of course. Uncommon, breathtaking beauty.

Earlier that afternoon, I had been taking a walk with a friend. I am 37, she is a little older, perhaps 39. We were talking about how hard it is for gorgeous women to age, because they get too accustomed to the oxygen of male desire. One of the good things about never being the best-looking woman in the room is that you never have to stop being the best-looking woman in the room. It is a dangerous game to base your meaning and self-worth on other people's admiration, because it will inevitably recede, and I don’t think anyone would understand that better than Whitney Houston. It must be agonizing to hold the world's attention in your palm, and then to feel it slowly drain away.

Didn't we almost have it all?

I listen to songs over and over again. I have always been like this. I asked my mother, who is a therapist, why I did this, and she said maybe I was trying to unlock a song's mystery, to master it in some way.

And I do notice different things every time I hear this song. I notice a quiver in the voice, a breath, a pause. I notice how the song ends by asking the same question twice, different each time. First it is defiant. Then it is sad and vulnerable.

Didn't we almost have it all?  the song asks. And I don't know the answer to this question. So I press repeat, and listen to it once more.