Whose Wisconsin recall is it?

Veer to the populist left or hug the middle of the road: That's the choice facing the campaign against Scott Walker 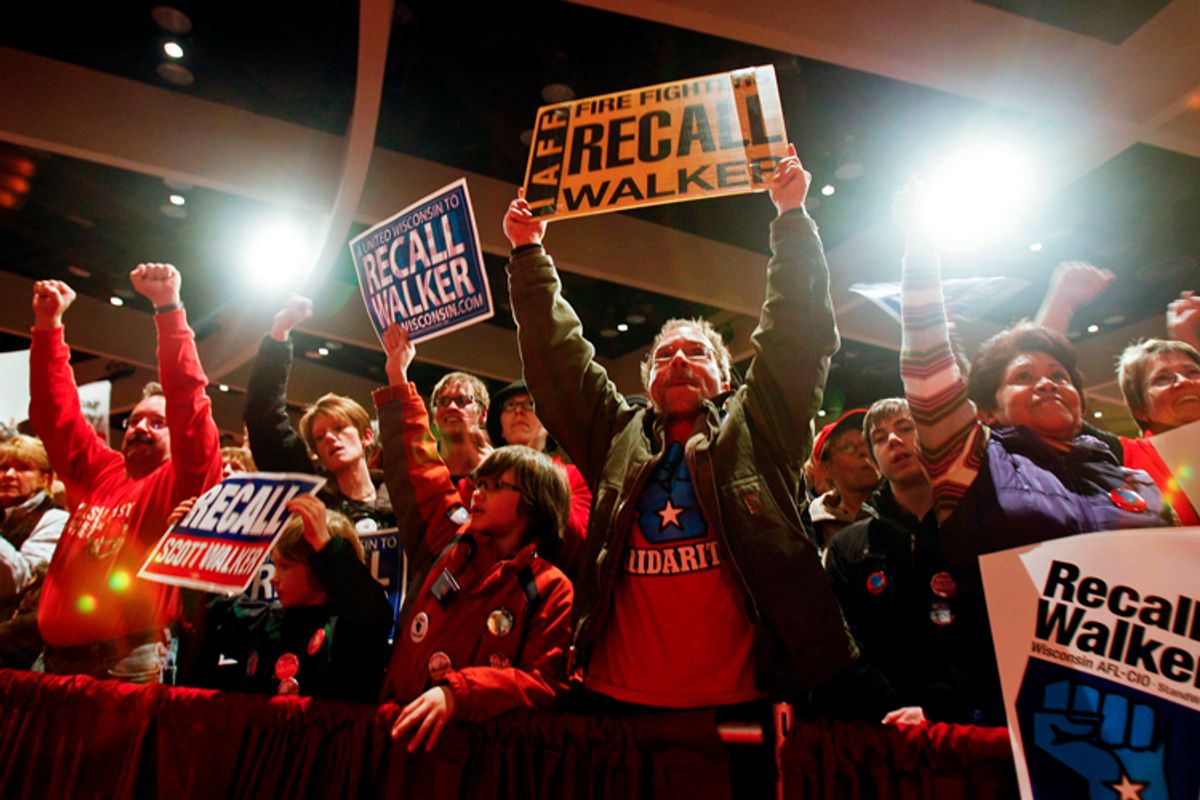 The Scott Walker recall is already historic.  Last month, organizers submitted signatures from over a million Wisconsinites, the largest portion of an electorate to ever petition for recall of a United States governor.  The total – nearly double the number required – means near-certain certification by the state’s election board of what will be the third gubernatorial recall in American history.  Last week’s $700,000 pro-Walker ad buy by the Koch brothers’ Americans for Prosperity was the latest confirmation that the Walker recall will be a marquee race.  But what kind of race will Walker’s opponents seek: a battle of competing centrist appeals, like the fall presidential election, or something very different?

Last winter, the three-week occupation of Wisconsin’s capitol brought into sharp relief what would become two of the year’s defining forces: Emboldened far-right state governments and emergent left populist movements.  After Walker successfully pushed through his “budget repair” bill to cripple public workers’ collective bargaining rights, much of the energy of the capitol occupation shifted to efforts to recall the bill’s midwives in the Senate.  Though they took place in Republican-leaning districts, last summer’s recall campaigns against six GOP senators were marked by fierce populism rather than cautious moderation.

TV ads, door-to-door canvassers, and some of the Democratic candidates themselves portrayed Republicans as rich people out to screw the 99 percent.  Their effect, Wisconsin AFL-CIO secretary-treasurer Stephanie Bloomingdale told me during the campaign, would “determine how we do these kinds of populist messages in other states.”  The result was a split decision. Two Senate Republicans went down, and four held on (all three Democrats facing similar recall elections survived).  The effort fell one success short of the announced goal of flipping the state Senate, but it was a striking victory against senators who had weathered the Democratic wave of 2008.  And it laid the groundwork for the recalls now facing more GOP senators, the lieutenant governor and Walker himself.

Will the campaign against Walker pick up the populism where those recalls left off, making class-based appeals and drawing sharp contrasts?  Or will it pander to the moderate sensibilities of an imagined middle 5 percent?  A few factors will make the difference.

First will be the selection of a candidate.  “The key to winning is to have a candidate who is a champion,” says SEIU Healthcare Wisconsin vice president Bruce Colburn, “and not somebody who is more of the same, or wants to be in the middle of the road.” Once Wisconsin’s elections board certifies the petitions, dates will be set for a general election (expected in spring or summer) and a Democratic primary preceding it.  By then, there could be a consensus candidate – or not.

In an early sign that “Anybody but Walker” won’t cut it, a rumored candidacy by Walker’s 2010 Democratic opponent, Milwaukee Mayor Tom Barrett, has been met by public and private discouragement from unions charging that his own hostile relations with public sector workers should be disqualifying.

“I would hope that Tom Barrett understands the issues here, and why he might not fit the matrix of what a champion looks like,” says Marty Biel, executive director of the largest local of the state’s largest district council of the American Federation of State County and Municipal Employees (AFSCME).

One public face of the Wisconsin uprising, Fire Fighters Union president Mahlon Mitchell, has been publicly weighing his own run, though it appears unlikely.  Assembly Minority Leader Peter Barca, a prominent Walker antagonist, is a potential candidate.  State Sen. Kathleen Vinehout, who has often sided with the GOP, announced her candidacy on Wednesday and touted her role as one of the “Wisconsin 14” senators who fled the state last year in opposition to Walker’s bill.

But it won’t just be the candidate setting the tone; so will the tactics. To channel, and resemble, an actual popular movement, much of the campaign will have to take place in face-to-face conversations rather than just on TV.  The more progressives take the campaign door to door, the more populist it will be – and that may be where the campaign is won or lost.  Activists expect the message on the doors will be more aggressive than whatever the candidate’s own message is. “It’s pretty clear that when people call him ‘1 percent Walker,’ that resonates,” says Colburn, who adds that labor will supplement traditional voter canvassing with rallies around the state.

Then there’s the message of the TV ad wars, of which Americans for Prosperity’s $700,000 is just a harbinger.  Much the advertising in the Senate recalls came not from the Democratic candidates or party, but from the labor-community We Are Wisconsin coalition.

“Historically it was labor and the Democratic Party that partnered in the political process,” says Biel.  “But here the change is, it’s labor and the community that partner in the political process.”  We Are Wisconsin’s ads helped establish the campaign’s populist edge, and some Democrats’ ads reinforced it.  The more third-party groups dominate advertising, the more populist it’s likely to be.  A spokesperson for Democracy for America  says the national group will support We Are Wisconsin’s efforts.

All of these influences will be mediated by the events unfolding outside the campaign over the next few months.  Positive economic signs that buoy Obama’s reelection chances would do the same for Walker.  If the economy improves, progressives may be more hesitant to skewer Walker as representing the 1 percent -- but that kind of contrast will become even more important.

Even more significant may be the metastasizing corruption controversy embroiling Walker.  One of the former Walker aides charged with illegal campaigning Tuesday pled guilty as part of a deal in which she’ll testify against other Walker associates.  Walker himself has retained a pair of criminal defense attorneys to accompany him to a meeting with Milwaukee’s district attorney.  If the scandal intensifies, it could become the centerpiece of a cautious, moderate campaign that skirts ideology and makes the case Walker is just too corrupt and divisive to serve.  Or the scandal could be folded into a populist narrative in which Walker’s alleged crimes are portrayed as an extension of his corporate agenda.

“The message we started here has gone out [through] the Occupy movement and really resonated,” says Democracy Addicts co-founder Ed Knutson, who’s been active in last year’s capitol demonstrations and Occupy Wall Street. Knutson expects “a strong populist element” to the campaign.  “There’s a real opportunity here to … move it a little bit further back to the left.”

The AFL-CIO’s Bloomingdale says the work of the recall – long days volunteering in the cold – has raised activists’ expectations.  “People didn’t go out and collect those signatures in those conditions for nothing.”