An offensive advocate for LGBT rights

By choosing Goldman CEO Blankfein as a spokesman, HRC signals that corporate malfeasance is perfectly acceptable 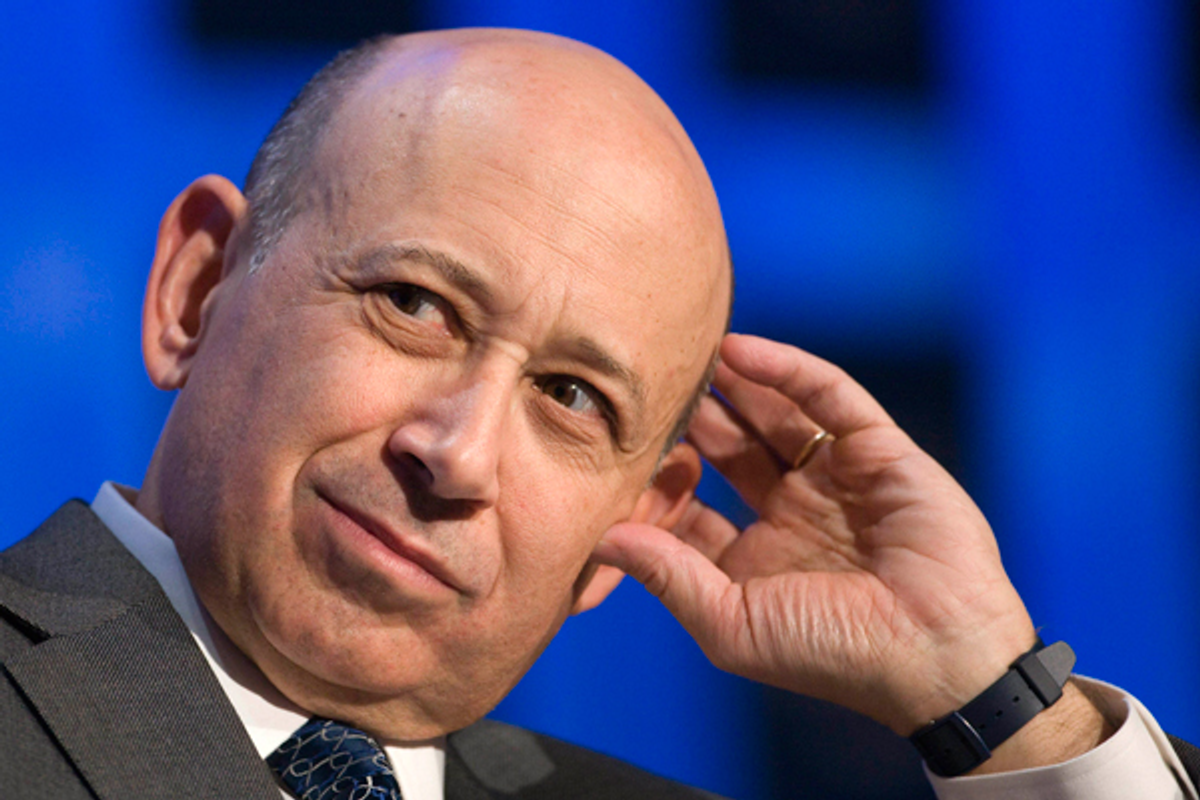 Last week, the Human Rights Campaign, the organization that advocates for equal rights for gay, lesbian, bisexual and transgender people, announced that Goldman Sachs CEO Lloyd Blankfein will be its first "national corporate spokesman for same-sex marriage." HRC's move was almost universally portrayed in the media as a laudable one for the cause of equality: a supposed Nixon-goes-to-China-esque coup that aligned a politically conservative icon with a liberal cause. As one HRC executive told the New York Times: "Lloyd Blankfein is not someone average Americans would think is going to support marriage equality."

In all the ovation and self-congratulation, however, two big problems were left unmentioned.

First and foremost is the simple fact that this is not some brilliant P.R. move in the Nixon-to-China vein. On the contrary, many (though certainly not all) Wall Street financiers have long professed their support for gay rights, culminating in their pivotal role helping legalize gay marriage in New York state. That's, in part, because it's an effective strategy to divert attention from their economic agenda.

Taking a page out of corporate greenwashing strategies, many of the most offensively greedy, right-wing thieves in the business world have long touted their personally progressive position on select social issues like gay rights as a means of publicly presenting themselves as Good and Decent People. Not surprisingly, the particular progressive causes they choose tend to be those that do not impact their businesses or personal economic situations. In some cases, in fact, these thugs seem as if they are leveraging their stands on such progressive issues as a quid pro quo bargaining chip for their personal financial interests. As just one example of where that kind of dynamic may have played out, recall that almost immediately after Wall Streeters underwrote Democratic Gov. Andrew Cuomo's campaign to legalize gay marriage, Cuomo launched a public (though ultimately unsuccessful) campaign to halt the extension of a so-called millionaires tax on those same Wall Streeters.

This isn't to say that Wall Streeters' support for marriage equality isn't a good thing; it most certainly is. (As a strong supporter of marriage equality, for instance, I'm glad those Wall Streeters helped New York State legalize gay marriage.) It's only to say that Blankfein's support of gay marriage isn't some hard-to-believe coup; it's probably exactly what many "average Americans" would expect from a Manhattan investment banker.

That gets to the second, even bigger problem: What, then, is the movement for equal rights really saying to "average Americans" when that movement promotes someone like Blankfein as its chief public spokesman? And what is the muted reaction to the HRC announcement saying about what is acceptable in America?

To answer that question, consider who Blankfein is -- and recall specifically that he is not some quiet, buttoned-up executive in a staid manufacturing industry, nor is he known as a new Lee Iacoca or Steve Jobs -- aka a person widely revered (rightly or wrongly) for how his innovation and business savvy (supposedly) helped the world. On the contrary, Blankfein is the singular -- and rightly detested -- poster boy for the lies, crimes and avaricious schemes that destroyed the economy, impoverished millions of Americans and ripped off taxpayers.

This is a man who refused to tell Congress the truth about the basic facts of how the firm he led bet against -- and profited off -- the destruction of the American economy. As Rolling Stone's Matt Taibbi documented, in 2010 Blankfein "went to Washington and testified under oath that Goldman Sachs didn't make a massive short bet and didn't bet against its clients" -- even though the Senate's "Levin report proves that Goldman spent the whole summer of 2007 riding a 'big short' and took a multibillion-dollar bet against its clients, a bet that incidentally made them enormous profits." Blankfein's lying was so egregious, the Senate Subcommittee on Investigations has recommended that the Justice Department consider perjury charges against him.

Blankfein is also the CEO who oversaw Goldman at the very moment that the firm engineered the infamous Abacus deal, a deal that was so insidious, that it ultimately drew a record $550 million fine from the Securities and Exchange Commission. Lately, he's made headlines personally lawyering himself up in preparation for possible criminal prosecution, which is probably a smart move because he's already being formally deposed in a civil lawsuit related to the SEC settlement. And, of course, this says nothing about Blankfein and Goldman's central role in the deceptive mortgage securitization schemes that, ya know, cratered the entire global economy.

Considering all of this through the prism of HRC's decision to promote him and the political/media world's supportive reaction to that decision, we see a disturbing message: namely, that in America, if you commit the most odious economic crimes against humanity, you can not only get taxpayers to bail you out, you can not only keep your job atop the most powerful corporations, but you get to keep your social status as well. In this case, you get to be promoted as the cheery spokesman of a progressive social cause.

This elucidates a troubling double standard between how we see civil rights/equality and how we see economic justice. Most mainstream organizations (and certainly all progressive organizations) would never willfully brand themselves to opponents of the former -- that is, they would never make their spokespeople open proponents of bigotry, prejudice and homophobia, and they would never do so in the name of reaching "average Americans" (yes, there are of course still groups like Focus on the Family and the Family Research Council that align themselves with that kind of hate, but at least as they do so it’s considered controversial and cause for widespread criticism). Yet, when a group pushing the progressive cause of civil rights and social equality promotes one of the avatars of economic injustice as a spokesman, there’s either no criticism at all — or widespread applause.

To be sure, when it comes to divisive political issues, there are no perfect high-profile spokespeople for public awareness campaigns. Everyone has a flaw, nobody is pure, and almost nobody is universally liked. But there's a clear and obvious difference between imperfect and villainous. When a progressive group refuses to find the former and instead willfully aligns itself with the latter, it may help the specific and worthy cause at hand in the short term (in this case, marriage equality). But over the long haul, it sanitizes that villain and, worse, helps legitimize all he represents -- including all the terrible things he represents.

That's why Blankfein probably jumped at the chance to be HRC's spokesperson -- it's a great deal for him, even as it gives the big middle finger to the millions of Americans he harmed in this recession.