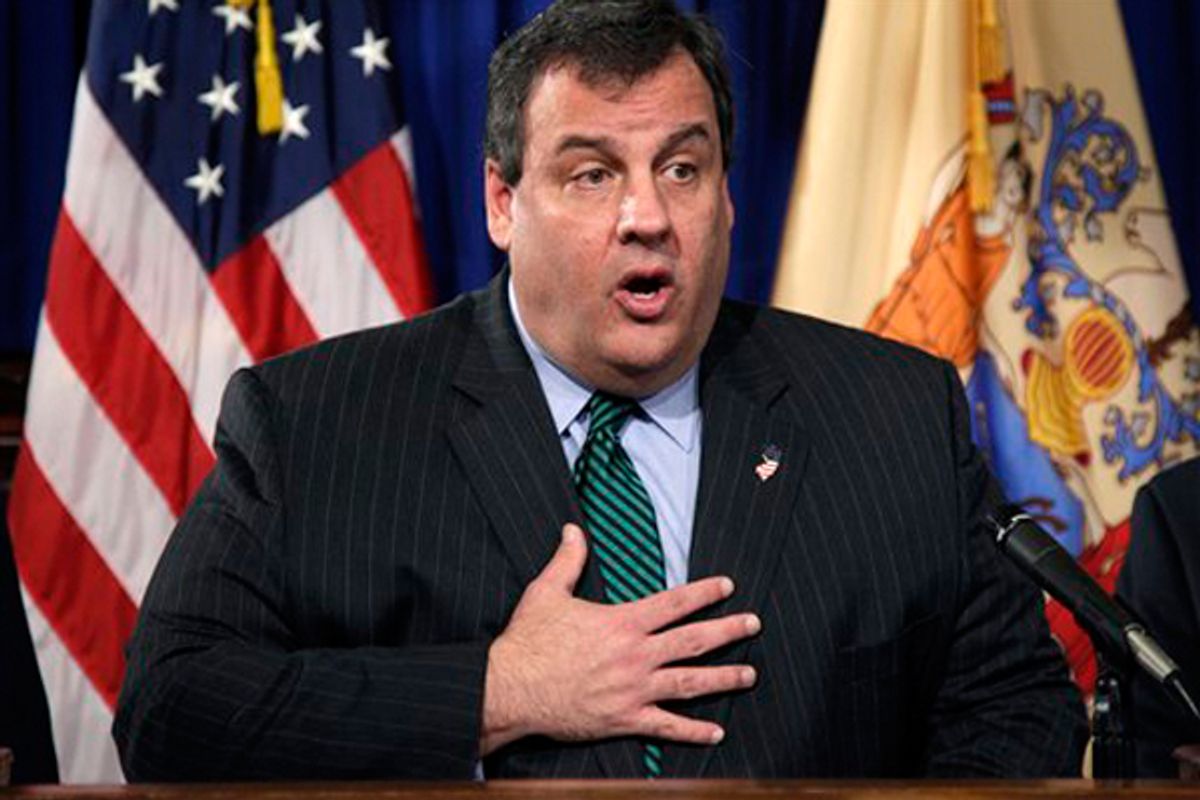 There are two elections on the horizon that Chris Christie has a particular interest in. The first is in New Jersey next year, when he'll seek a second term as governor. The second is in 2016, when he'll make a logical presidential candidate -- if he wins reelection in '13 and if the Republican nomination is open. (For now, at least, let's leave aside the idea that Christie might serve as his party's vice presidential candidate this year.)

This makes the debate over gay marriage in the Garden State, where the Democratic-controlled Senate approved marriage equality legislation yesterday, a problem for him.

On the one hand, support for gay marriage among New Jersey voters is solid -- 52 percent favored it and 42 percent opposed it in one recent poll, while another pegged the margin at 48-37. Among independents, support is even higher. And the trajectory seems clear: Just five years ago, those overall numbers were reversed when the topic was polled. Given how rare Republican victories in New Jersey are (Christie's 2009 win marked just the fifth statewide triumph for the GOP in 37 years, and only the second that was won by more than a point), Christie has to be very careful as he approaches his reelection race. He doesn't have much margin for error when it comes to alienating swing voters -- one of the reasons he was so colorful and adamant in denying interest in the presidential race last year -- and swing voters in New Jersey are generally fine with gay marriage.

But Republican voters nationally are not, and it will be a long time before they are (if they ever are). So if he wants to preserve his viability for '16, Christie cannot be known as the New Jersey governor who enacted same-sex marriage. But he also can't position himself as a hard-line, stop-at-nothing-to-derail-it opponent of it; to do so would reek of the cultural conservatism that has made most national Republicans unmarketable in New Jersey and endanger Christie's reelection prospects. And if he gets the boot in '13, it could sink whatever '16 ambitions he has.

Christie's workaround has been to oppose gay marriage while calling for a public referendum. This has elicited howls from gay marriage supporters, who argue that minority group rights should never be put to a vote, but it has aligned him with a clear majority of voters, who say they like the referendum idea. Of course, a referendum campaign would be long, messy and divisive. And anyway, Democrats in the Legislature have the votes to make sure one never takes place.

But yesterday's state Senate vote offered another potential way out for Christie: a legislative override. Twenty-four of the chamber's 40 members -- including two Republicans -- voted for gay marriage, a surprise result and a significant increase from the last such vote in 2010. It would only take three more votes to reach the number needed to override Christie's veto. In the Assembly, where the bill will now head, Democrats enjoy a 47-33 majority, with 54 votes needed to override a veto.

The Republican Party in New Jersey has its very conservative pockets, but the cultural moderation of Clifford Case, Tom Kean and Christie Whitman is still prevalent too. There probably are a handful of GOP senators and a scattering of Assembly members who are personally OK with gay marriage and who could survive politically if they voted for it. This presents a Machiavellian possibility for Christie: Wink at them, continue voicing his opposition, then throw up his hands as the Legislature overrides him and takes the issue off the table. As Josh Benson of Capital New York theorizes:

That would be a slap in Christie's face, for sure. But it's not clear that it would hurt. After all, if Christie vetoes same-sex-marriage legislation and gets overridden, he'll be able to tell conservatives one day, when he's asking for their support, that at least he tried to keep the liberals in check.

The Legislature has until the end of its current term to override Christie -- meaning nearly two years. So don't expect an override any time soon. But if popular support keeps growing and Christie finds himself staring at a difficult reelection race in '13, it might start to make sense.