When did Demi Moore know she and Ashton were done? Maybe when she tried and tried, but still couldn\'t rise from bed 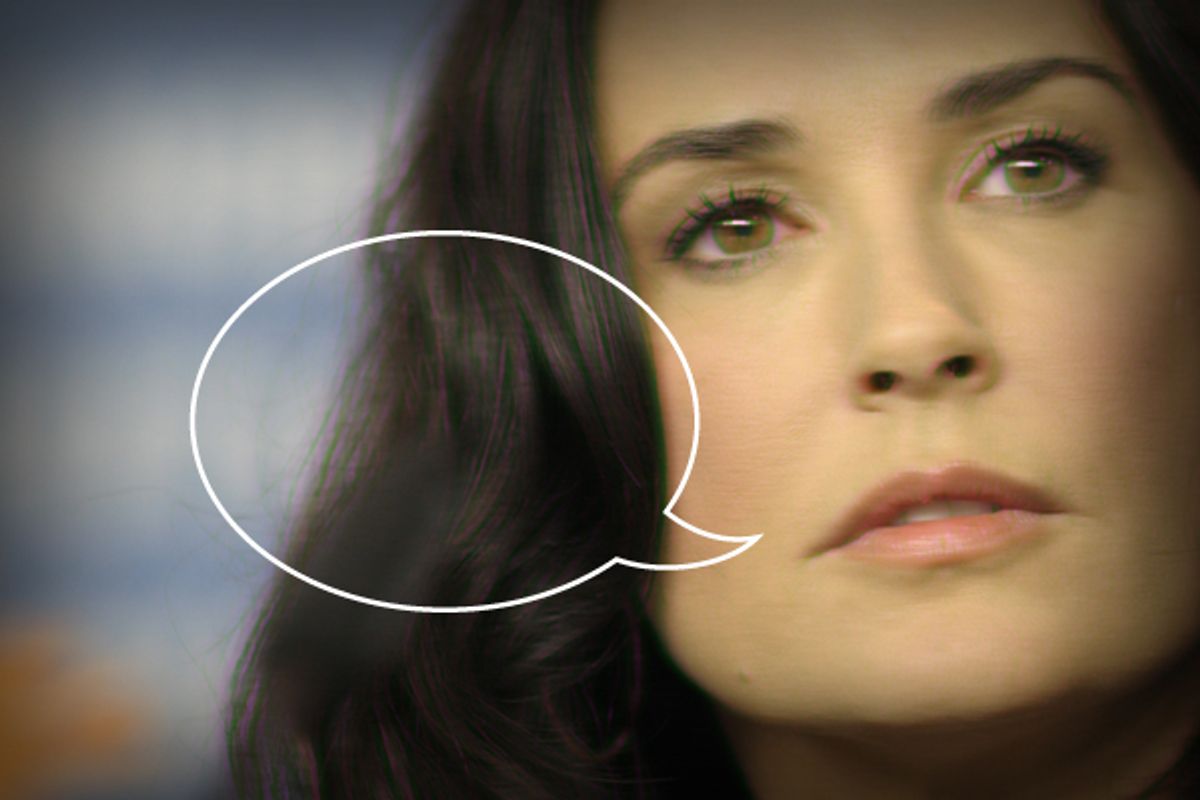 The party is in the Hollywood Hills, at someone’s house that looks familiar, or maybe all these houses look alike to me at this point. We’re outside by the pool and the air smells of citronella and night-blooming jasmine. I’m drinking a Red Bull and watching a couple of girls in sundresses leap into the shimmering water, the thin fabric revealing their underwear, both of them shrieking loudly to make sure everybody pays attention.

They are lovely, those girls.

The music is so loud it pulses inside my chest, as if it’s replacing my heart, which would be fine with me. Two guys come up and start dancing. They look exactly the same, androgynous and pretty, with floppy hair. It’s a look I like, feel strong against, and we all three sway together.

When the music pauses I order one of them to get me another Red Bull. He nods and bows; he likes being ordered around.

“Chivalry is not dead,” he says.

The other one tells me I’m beautiful and I can see he means it. Then he gets that look in his eye — soft, sweet  — and asks if I’m OK. Every person I’ve talked to in the past two months has looked at me like that and asked if I’m OK. It is driving me insane.

“Never better,” I say, and I mean it to sound bright but it comes out sarcastic.

This good-looking boy, maybe 23, tells me not to give up on love. “Just … don’t stop believing.”

“Exactly,” he says earnestly. “We’re all on a journey.”

I could tell him that believing in love is not my problem. If anything, I believe in it more than ever. I understand its strangeness, its tender bloodthirstiness, how it’s large enough to contain hate and humiliation inside it and still exist. Love is every kind of emotion at the same time. It’s more complicated and terrible than I ever knew, and it has filled me, fractured me.

But seriously, why would I say that to him?

So instead I smile and nod without speaking. It seems fine with both of us. I’ve spent the last few weeks doing nothing but talking. I’ve negotiated and discussed and confessed and processed and prayed. None of it has made much difference. The next time I fall in love, I decide, I will do it all in silence.

Then somehow it’s a couple of hours later and I’ve lost track of my two handsome boys and even worse I’m out of Red Bull. There’s more dancing and a lot of people pressing up against me and in a moment when the crowd shifts I think I see you on the other side of the pool, your white shirt reflected in the turquoise water, and my chest lurches but it’s somebody else and I feel both empty and relieved.

The day I knew it was over, we were camping. It was my idea to go out into nature, into a place that felt simpler, where we’d talk and just be ourselves with nobody watching. We hiked up to a bluff where we could see the ocean, and the air smelled of spicy juniper and warm earth. We held hands and were gentle with each other, as if we might shatter, and looked at the view.

For a little while it was really nice, and I thought maybe we can do this. And then I felt everything around me sinking. I understood: It was the gentleness that told me it was over. We were wrung out. We’d reached the point where all we wanted was not to wake up each day and face the wreck of it.

Now it’s 2 in the morning and we’re in a private room at a club on Sunset and the music is muffled and electric and a beautiful girl with a squeaky voice tells me my hair looks great and I say thank you.

“The best thing about L.A.,” she adds, leaning in like she’s sharing a secret, “is that there’s no humidity. Everybody’s hair looks so perfect.”

I want to laugh at her but I can’t, because every woman wants to be perfect. She notices my lips twisting in this almost-laugh and says sweetly, softly, “Are you OK?”

I reach out to wring her neck. Mistaking this gesture for something else, she grabs my hands and holds them warmly and we sway together for a while. Then somebody offers her some ecstasy and she promises she’ll be right back. As she disappears into a churn of bodies my gaze follows her across the room and I know you’re not even in the country but I see you on a platform dancing with a blond girl in a silver skirt and gleaming skin.

If you were here, these are the things I would say to you:

You have the most beautiful smile I’ve ever seen.

That show you’re on is terrible.

I know we’re both to blame. Every day we devised new ways to rub each other raw, scraping the vulnerable spots we’d always known about but left untouched. We were experts at it, geniuses of punishment. And yet, if you offered me the choice, I wouldn’t go back, I wouldn’t give up any of it, because it made me something different, broken but bigger, than I had been before.

Which is another way of saying that I will love you forever, even if that love has no path forward in this world. No journey.

And somehow it’s dawn and we’re in the car with the windows rolled down and the air smells of car exhaust and fried food and my chest is burning in a way that’s not totally unpleasant and my breath is full of diamonds. The sky is beginning to lighten and I know the sun is on its way up even though I can’t see it yet. You’re in the seat next to me, holding my hand, and I’m not sure if this is now or then, a wish or a memory, and I don’t really care, because your smile is bright and there are splashes of neon across your cheek, pink then red, and I’m laughing at something you just said and the car’s going so fast it feels like flying and for a moment, everything is beautiful and so, so perfect.

Alix Ohlin is the author of the novel "The Missing Person" and the collection "Babylon and Other Stories." A new novel, "Inside," and a story collection, "Signs and Wonders," are forthcoming from Knopf this spring.