Did the war on drugs kill Whitney Houston? 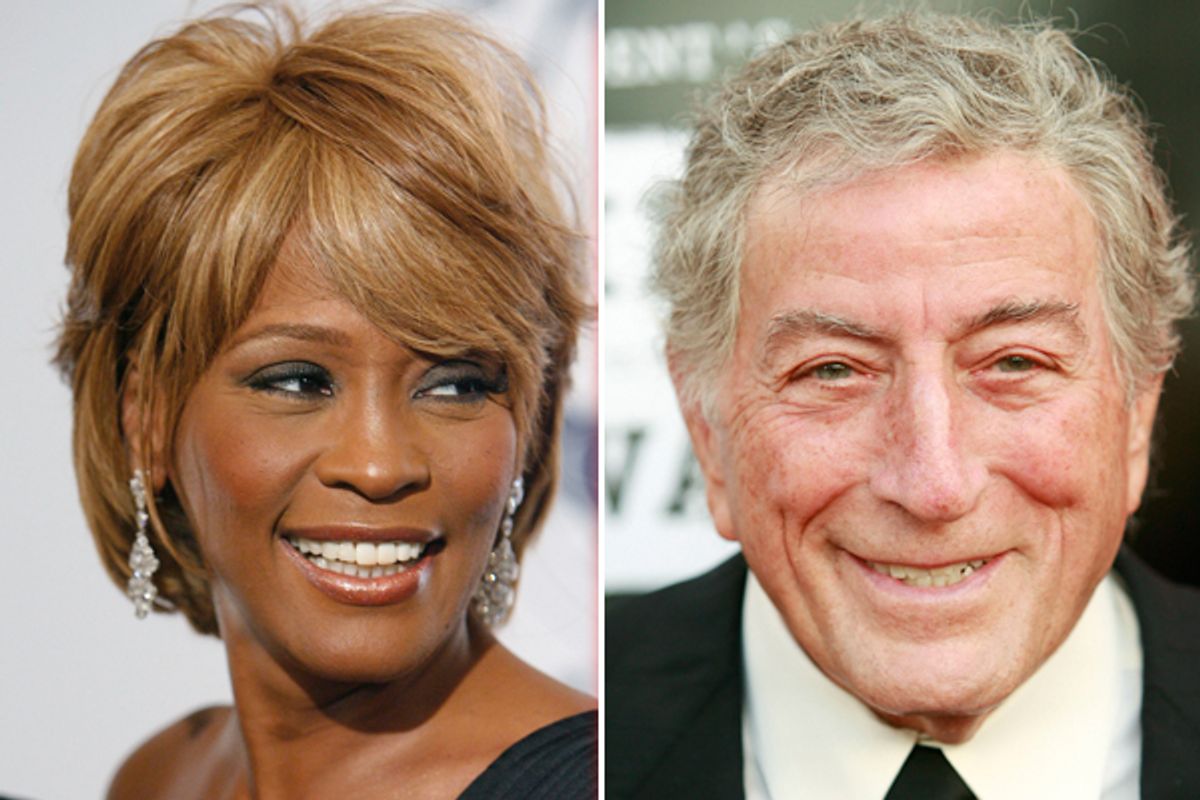 It may be weeks before the exact circumstances of Whitney Houston's death Saturday are determined, but Tony Bennett has some ideas on how it could have been prevented. Drug legalization.

Just hours after the news of the singer's death, Bennett was at a Grammys event in the Beverly Hills Hilton – where Houston died just a few floors above – and said, "First it was Michael Jackson, then there was Amy Winehouse, and now the magnificent Whitney Houston. I’d like to have every gentleman and lady in this room commit themselves to get on government to legalize drugs ... Let's legalize drugs like they did in Amsterdam. No one's hiding or sneaking around corners to get it. They go to a doctor to get it."

Bennett knows plenty about drugs -- and the ravages of addiction. He's been upfront in the past about his own experience with drug abuse and his near fatal 1979 overdose on cocaine. In his 1998 memoir, "The Good Life," he wrote of passing out in a bathtub, an eerie foreshadowing of the discovery of Houston's body in her hotel tub. And on Sunday, he shared a Grammy win with the late Amy Winehouse for a duet on "Body and Soul."

Back in September, Bennett said that Winehouse "knew that she was in a lot of trouble" and "that she wasn't going to live." After taking the stage with Winehouse's parents Sunday night, the 85-year-old Bennett told Rolling Stone that drug legalization would "get rid of all the gangsters that make people hide. One thing I've learned about young people, when you say 'Don't do this,' that's the one thing they're going to try and do. Once it's legal and everybody can do it, there is no longer the desire to do something that nobody else can do ... I witnessed that in Amsterdam. It's legal, and as a result there's no panic in the streets. There's no deals, there's no 'Meet me at the corner and I'll give you something.' You're always afraid you're going to get arrested. You have to hide. Why do that?"

You don't have to be Zach Galifianakis to know that America's 40-year war on drugs is a joke. Or as the Global Commission on Drug Policy called it last year, a flat-out failure, one with "devastating consequences for individuals and societies around the world." Arrests for nonviolent possession offenses continue to rise, disproportionately targeting minorities and creating a booming prison population. According to the Bureau of Justice Statistics, "Between 2000 and 2007, drug offenders represented 45 percent of the growth in the federal prison population." Meanwhile, even the president of the United States can acknowledge, "I inhaled frequently. That was the point."

But talking about drugs – and how we as individuals and a society handle them – can't be managed with a simple "It's all good." To do so ignores not only the enormity and unmanageability of the international trade but the complexities of consumption. Smoking weed and running a meth lab out of your basement aren't exactly the same things. We can't just make blanket statements about "drugs" as if they're all the same, not in a culture where we still expect limits on environmental toxins. And if you've ever wandered into a circle of thuggish, hooker-seeking British tourists in Amsterdam on a summer weekend, it's worth asking – Hey, Tony Bennett, is this really the greatest argument we've got for how great legalization is?

Yet what really muddles the waters is the examples Bennett used, of Michael Jackson and his friend Amy Winehouse. The claim that "Once it's legal and everybody can do it" problems go away is sadly untrue. Michael Jackson didn't meet his maker shooting heroin into his veins; he died of "Acute Propofol Intoxication" -- and his doctor, Conrad Murray, was subsequently convicted of involuntary manslaughter. Other drugs found in Jackson's system at the time of his death were the FDA-approved Lorazepam, Lidocaine, Diazepam and Midazolam. Winehouse, meanwhile, died of alcohol poisoning.

Houston was no stranger to the illicit. In 2009, she admitted doing "heavy drugs, every day," including cocaine, to Oprah Winfrey. But the investigation into her death so far has focused on prescription medications. A plea for a saner approach to our misguided, punitive drug war is a valid one to make. But accessibility doesn't cure the problem of abuse. And as Dylan Thomas, Marilyn Monroe, Elvis Presley, Jackson, Winehouse -- and quite possibly Whitney Houston -- discovered, you can die just fine without breaking any drug laws.