It's the GOP insurgent, not Obama, who is waging a war against religious freedom 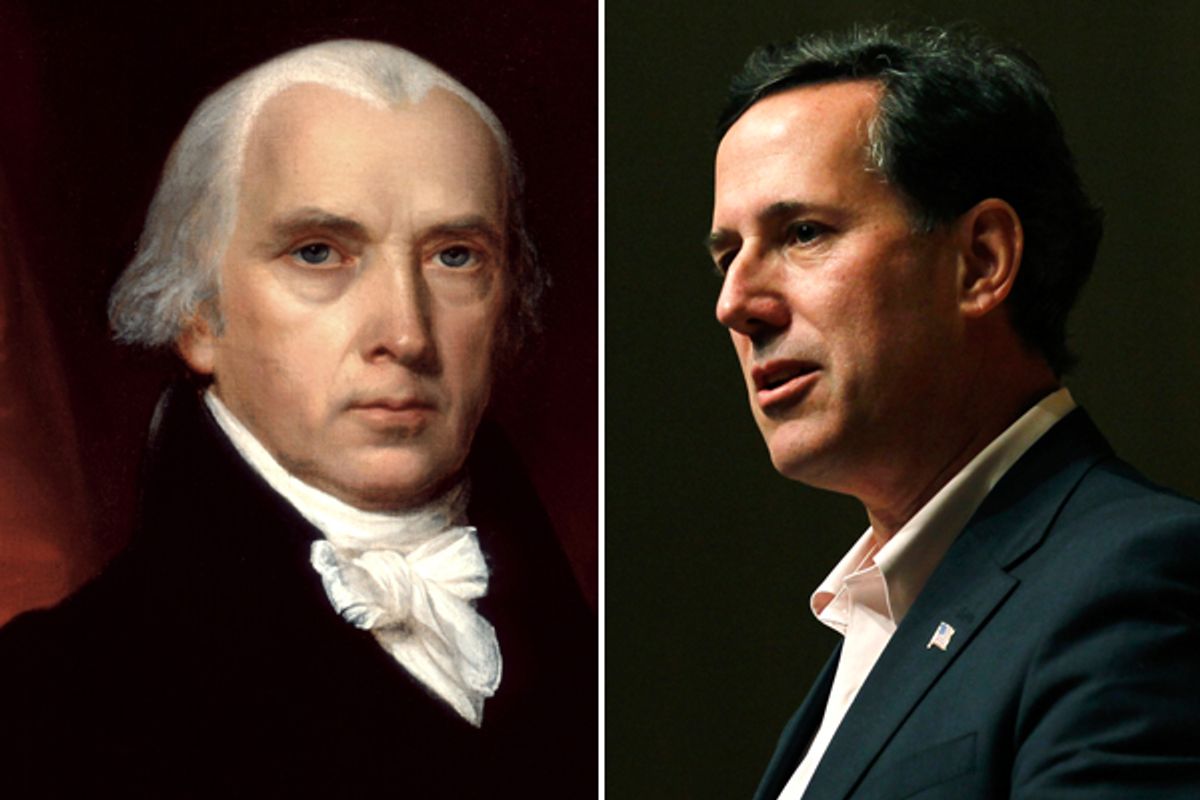 Each time presidential candidate Rick Santorum rears his righteous head, it is to exploit a social issue that is of no import in a national election.  But he knows that the way to keep the cameras pointed at him one more day is to manufacture a new bit of hysteria.

Last Thursday, Joan Walsh reported on Santorum as he clamored to punish non-Catholics by limiting their access to contraceptives if their workplace was in the hands of the Catholic Church.    She rightly pointed out that he “absolutely mangles” what the founders said about religion.  Raising the specter of the atheistic French Revolution and its notorious use of the guillotine, the former Pennsylvania senator planted a seed in the minds of his hearers: A left-driven tyranny was where the anti-Christian Obama administration would be heading next.

The fear-monger tosses out familial metaphors with devilish glee.  At once subverting patriarchy within the home and turning the federal government into Big Brother, the sitting president stands in moral opposition to all that is good.  And only the moral policeman Rick can stop him.

“They are taking faith and crushing it,” Santorum howls at the political left. “When you marginalize faith in America, when you remove the pillar of God-given rights then what’s left is the French Revolution…. What’s left are no unalienable rights.  What’s left is a government that will tell you who you are, what you’ll do and when you’ll do it. What’s left in France became the guillotine.”

This is a combination of really bad history and undisciplined demagoguery.  What we’d like to focus on is not the fractured logic of the demagogue so much as the perversion of history by the two-term senator.  We consider it quite sad that a presidential candidate in 2012 should be resurrecting the same dirty campaign tactic that accompanied the charge that Thomas Jefferson, for five years U.S. minister to France, would, if elected president, shut down churches and burn bibles.

Start with the fact that in his superficial evocation of the 1790s, Santorum was referring not to the French so much as he was unconsciously reviving the propaganda used by New England Federalists against the “atheist” Thomas Jefferson, who championed freedom of conscience and refused to wear his religion on his sleeve.  From 1793 on, conservative Yankees predicted that the social chaos of Paris would wash ashore in America.  Indeed, conservative academics of our own time view the French Revolution as the first step toward the Russian Revolution and the rise of the Soviet Union–all of which fits neatly with the crack-brained Tea Party narrative in which President Obama is a sworn socialist and enemy of capitalism.

Mitt Romney is not beyond indulging in the same polemical game, associating Obama with European social programs.  Yet Santorum does what the Mormon cannot, by playing the “Catholic card” in his effort to “other” the president.  It is an especially bizarre move in historical relief, because the Federalist critics who most loudly warned of the French-tainted Jefferson were New England Calvinists who feared Catholics as much as they feared French anarchy.

Federalists termed the French Revolution a “contagion,” a violent, sickening, uncivilizing process.  If Santorum sees the metaphorical blade of the guillotine hanging over the heads of the Catholic bishops, it is well worth noting that eighteenth-century conservatives were so carried away by their own outlandish predictions that their panicky congressional majority passed a series of repressive laws, the infamous Alien and Sedition Acts in 1798, which first targeted French émigrés and then U.S. citizens who needed to be silenced.  The Sedition Act authorized the imprisonment of journalists and politicians who criticized the president.  The main purpose of the legislation was, as James Madison observed, to shut down free and open political debate–to derail democracy.  Cleverly drafted, the Sedition Act allowed the government to punish critics of the president, but not the vice president.  Why the omission?  Because in 1798, John Adams’s vice president was the unAmerican Thomas Jefferson.

It certainly seems that Rick Santorum reads the First Amendment just as the Federalist Congress of 1798 did.  As we all know, though, the First Amendment was intended to uphold religious freedom, protect speech, and ensure liberty of conscience.  Madison, who conceived the First Amendment, defended the last of these three principles as a deeply private, individual right shielding citizens from the coercive, invasive force of a church or state government.

It is Santorum, not President Obama, who is waging a war against religion.  It is the fear-mongers who endanger religious freedom.  Why should the Catholic Church impose its doctrines on employees who are not Catholic?  Why should any who are not Catholic be deprived of access to a health insurance benefit solely because they are employed by a Catholic hospital or university?  Why should the Church be permitted to impose its doctrines on an individual who not a member?  The First Amendment does not grant any church the power to deprive individuals of rights.

Santorum is waging a war not only on religion but on all Americans who do not share his faith.  The Catholic Church has every right to impart its doctrines; its members can accept or reject them.  The majority of Catholic men and women have rejected the particular doctrine prohibiting the use of contraception.  Employees possess the right to insurance and the right to adhere to their own religious beliefs.

As Madison argued in a 1788 letter to Jefferson, religious fanaticism was as serious a danger to religious liberty as excessive state authority.  In his words, “rights of conscience” were undermined by “overbearing majorities” who were intent on advancing the interests of a particular “religious establishment.”  In plain and simple terms, the founders meant to protect individuals against excessive encroachments by church as well as state.

We might all wish to heed Madison’s further warning:  “It is a melancholy reflection that liberty should be equally exposed to danger whether the Government has too much or too little power.”  Religious liberty required the protection of state authority, in creating a barrier around the individual and guarding against intrusions from religious institutions.

The fact remains that President Obama is no more a French Revolutionary Jacobin than Jefferson or Madison.  It appears, in fact, that the president has a very clear understanding of religious liberty, appreciating the boundaries between church and state just as Madison intended.  His promptly conceived compromise solution, respecting religion without restricting rights, fits the balanced, reasonable approach our founders prescribed when they fought, state by state, to eliminate state funding and sanctioning (i.e., disestablishment) of privileged sects.

If the last three years tell us anything, 2012 will not usher in a new Age of Reason.  Fanaticism will continue to seize the news cycle.  Rick Santorum has learned (perhaps from Donald Trump and birther mania) that the best way to grab the headlines is to ramp up the epithets, bark the loudest, and fantasize a history that never was.