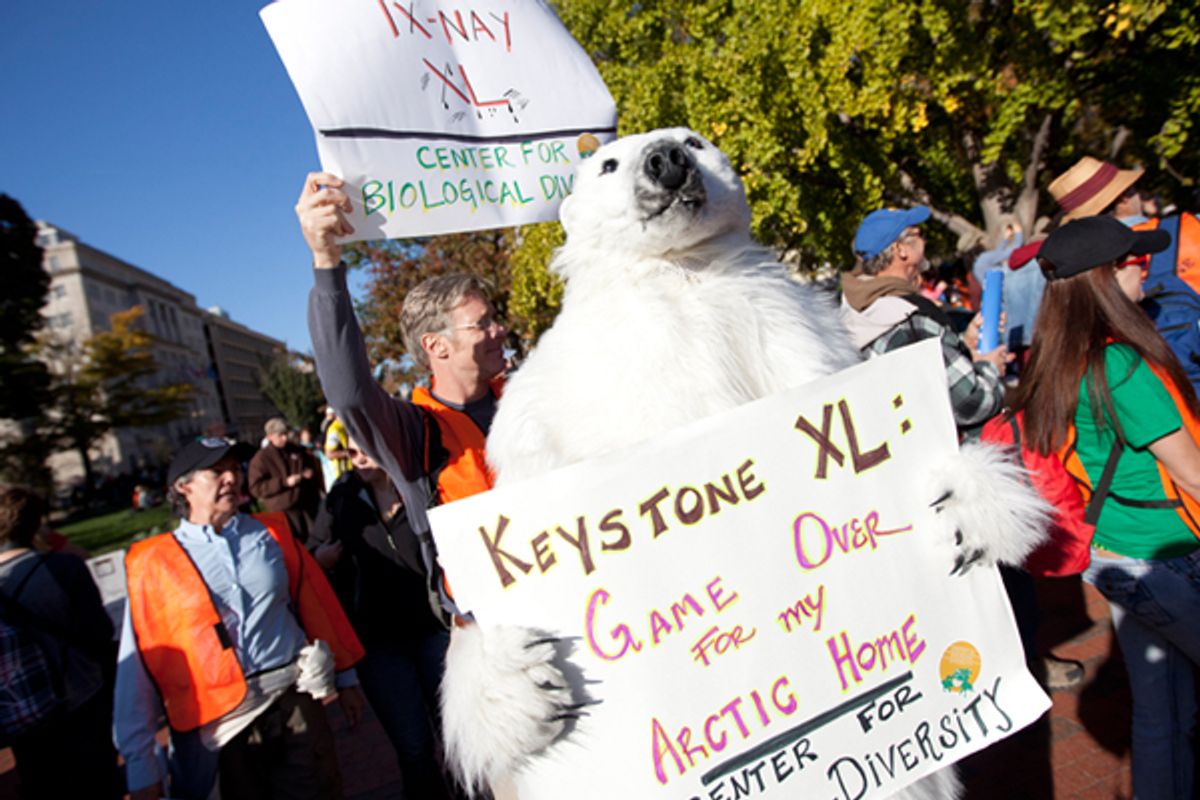 When the Obama administration announced last month that the Keystone pipeline project would be delayed pending a more thorough environmental review of its impacts, Keystone's opponents celebrated, but warned that the fight was far from over. Sure enough, pipeline politics remain front-and-center as those in favor of the pipeline seek to circumvent the longer review process while its opponents struggle to fend off attacks on their tenuous victory. The past few weeks have seen a burst of legislative maneuvering as Republicans seek a way to rubber-stamp the pipeline without the president’s approval.

The maneuvering is intense because the struggle over the 1,600-mile proposed pipeline has become a proxy battle in a larger war over climate change, corporate influence and the legacy of the Obama administration. Both sides agree that the fate of Keystone XL will influence more than just whether oil is transported from the tar sands of central Canada to the United States. It will signal whether the U.S. is moving away from the carbon-fueled economy or embracing it anew.

The Republicans are attacking from several directions. A House bill introduced by Rep. Lee Terry, R-Neb., in December would require the Federal Energy Regulatory Commission to issue a permit within 30 days of receiving an application, essentially removing the Interior Department and Army Corps of Engineers from the oversight process, exempting the pipeline from several state and federal environmental regulations, and eliminating any discretionary review process.

The House Energy and Commerce Committee approved the bill on Feb. 7, while killing Democratic amendments to prevent Keystone oil from being exported after processing, to block TransCanada from using eminent domain to seize private land, and to certify TransCanada's claims that most of the steel used in building the pipeline would be manufactured in the United States. Republican leaders have also indicated that they're considering inserting the bill’s language into other legislation in a replay of December's payroll-tax-bill shenanigans.

Another bill, sponsored by Rep. Connie Mack, R-Fla., would allow Congress to approve the pipeline without presidential review by invoking Congress’s constitutional authority to regulate international commerce; Sens. David Vitter, R-La., Dick Lugar, R-Ind., and John Hoeven, R-N.D., co-sponsored a companion bill in the Senate. And today, Republican leaders added a provision to the same effect to a transportation funding bill that may go up for a vote as soon as Tuesday. In response, anti-Keystone activists are seeking to imitate the success of last month's anti-SOPA online activism, aiming to inundate senators with a stated goal of half a million emails within 24 hours to demonstrate that opposition to the pipeline remains strong.

The Keystone provision is unlikely to pass the Senate, let alone get a signature from President Obama. But if the past few weeks are any indication, we haven't seen the last of the pro-pipeline legislation by a long shot. Mitch McConnell gave the game away in a statement to the conservative publication Human Events, saying, "The only way we’re going to get the Keystone pipeline started is to defeat Barack Obama."

The party's aim is to make the pipeline's rejection a symbol of Obama’s alleged failure to stimulate the economy, and more generally, to paint a portrait of the president as a weak leader more concerned with appeasing “special interest groups” than with taking decisive action. Said Mack at a recent press conference, “The president has decided he’s not going to lead on this issue … so we need to get him out of the way,” while Lugar declared, "The president has failed to lead."

But pipeline protesters counter that Obama's decision on Keystone represented a courageous refusal to give in to pressure from fossil fuel lobbyists: MoveOn.org called it a "bold stand against the power of the oil industry," while Bill McKibben said he "did the brave thing" in standing up to the American Petroleum Institute. While the issue is frequently portrayed as one that could divide key factions of Obama’s base, with labor unions in favor of the pipeline and environmentalists against, several major unions have come out in support of the administration’s decision to delay the pipeline, calling efforts to speed up the review the "cynical move" of a "do-nothing Republican Congress" and stating, "President Obama has acted wisely."

A report released by the State Department investigator general last week also raised concerns about several aspects of the original environmental review. The report found that the original review failed to consider conflicts of interest: One of TransCanada's lobbyists, Paul Elliott, is a former aide to Secretary of State Clinton, and the third-party contractor selected to conduct the review had prior financial relationships with TransCanada.

Moreover, the State Department neglected to address several regulations and had insufficient expertise to adequately consider issues like the pipeline's potential impact on endangered species. The findings bolster environmental groups’ claims that the pipeline serves the interests of the oil industry, which is among the Republican Party's top donors, and TransCanada, whose spending on lobbying has tripled in the past year to $1.73 million, $1.33 million of which went to Elliott for pipeline-related expenditures.

And it’s not just American politics that have been shaken up by the controversy over Keystone. After the delay was announced, Canadian Prime Minister Stephen Harper said he would begin looking into alternative markets for the country’s natural resources, and during a recent visit to Beijing, “pledged closer trade ties with China.” That, in turn, has sparked a wave of concern about the specter of “foreign oil” back in the U.S., although most of the oil transported by the pipeline would ultimately be exported rather than used to supply the country's energy needs. Rep. Edward Markey, D-Mass., argues that Keystone would make the U.S. into “a middleman between Alberta and Asia” while doing nothing to reduce the country’s reliance on foreign oil.

Going forward, the coalition of activists opposed to the pipeline plans to deliver the signatures they've gathered over the past 24 hours to senators today, as Congress starts to consider the transportation bill. Majority Leader Harry Reid has indicated that a Keystone rider will kill that bill—and in any case, few Democrats support the House version, which Transportation Secretary Ray LaHood said "takes us back to the dark ages." Even if this attempt to fast-track the pipeline fails, though, there are plenty of other pro-Keystone bills in the works, and the GOP may try to insert a similar provision into the next payroll tax cut extension.

Either way, expect to hear more about Keystone over the next few months, as it's clear that both sides want to keep the issue in the news.  The ultimate outcome will likely depend on whether the public sees Keystone as a jobs issue or an environmental one, and indeed, some polls suggest that Americans are more receptive to environmental arguments than Republicans seem to think. In fact, Democratic leaders—some of whom support Keystone, and most of whom have tried to hedge their bets—may be a tougher sell.