Obama to unions: See you later 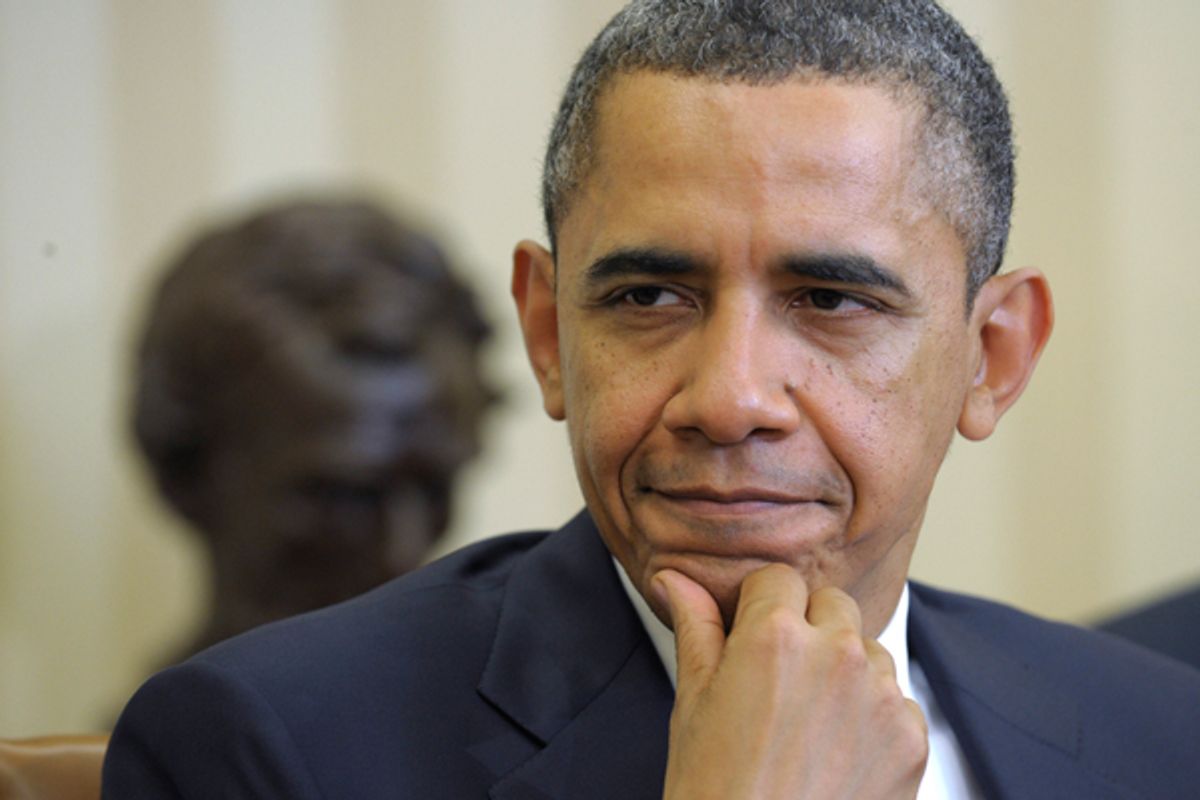 What me worry about unions? (AP/Susan Walsh)
--

On Tuesday President Obama signed a bill that will make it harder for workers to form a union.  This bill, the FAA Reauthorization Act, passed Congress last week despite an outcry from major unions.  Dozens of House Democrats voted for it, as did most Democratic senators.

To appreciate what that means, try to imagine a Republican president and Republican Senate majority leader signing off on a bill with pro-union language despite thundering objections from most big businesses.  Your imagination may not be good enough to picture that, which tells you everything you need to know about the asymmetry between Democrats and Republicans when it comes to labor.

The signing of the FAA bill ends a long-running legislative fight.  It began with something President Obama did right: He appointed members to the National Mediation Board who, in 2010, adopted a new rule governing elections for railroad and airline workers seeking to unionize.  Such workers are covered by the 1935 Railway Labor Act, rather than the National Labor Relations Act that covers most American workers.

For decades, one downside of the RLA regime was the requirement that, in order to succeed in an election, a union had to win a majority of all potential voters in a bargaining unit, rather than just a majority of all voters. (Wisconsin Gov. Scott Walker imposed a similar requirement on public workers as part of his anti-union bill last year.)  If political elections were counted the same way – with all non-voters counted as “no” votes -- very few of our current members of Congress would be in office.

The new rule from Obama’s appointees changed that.  Now, votes are counted in RLA elections the way they are in other union elections, or in presidential elections: Whichever side gets the most votes wins.  Predictably, Republicans were furious.  In a series of showdowns over the past year, the GOP insisted that the Federal Aviation Administration Reauthorization, which funds FAA functions like air traffic control, be amended to include language overriding the National Mediation Board’s new rule.  Democrats resisted, and President Obama threatened to veto any FAA bill with such a provision.  The short-term politics of these showdowns – one of which included a 13-day FAA shutdown last summer -- were never great for the GOP, and each one ended with a short-term extension.

On Jan. 20, with both parties saying it was time to resolve the issue once and for all, Senate Majority Leader Harry Reid announced a compromise with the GOP: The FAA bill would stay silent on how union election votes are counted – meaning the NMB rule stays in place until future NMB appointees reverse it.  But labor will face a steeper obstacle earlier in the process.  Rather than being required to submit signatures from 35 percent of workers in a bargaining unit to trigger an election (as had been required), unions would have to submit signatures from a majority just for a vote to be held.  It wasn’t immediately obvious what was so bad about this; in most cases, filing for a union election without a strong majority committed to vote yes is organizing malpractice.  Many unions were slow to issue reactions, and a few voiced support.

But the devil was in the details.  In a Jan. 30 letter, 18 international unions called on the House and Senate to reject the deal, writing that otherwise “Airline and rail workers would suffer significant losses as contracts are jettisoned, collective bargaining rights are cut and legal hurdles will be placed in the way of gaining a voice at work.” (Full disclosure: I used to work at UNITE HERE, one of the signing organizations.)

“This is our Wisconsin,” Association of Flight Attendants-CWA President Veda Shook told a Communications Workers of America crowd before Congress voted on the deal.  Shook said that while “Reid and Republicans are falsely claiming” the compromise would only require unions to win majority support, its effect would be much worse than advertised: By packing an employee list with ex-workers or challenging voter eligibility, management would have new opportunities to delay or avert an election despite majority support.  By legislating election rules, the bill would enable management to call workers who signed cards to be questioned as part of discovery in an anti-union lawsuit.  When a larger non-union company merged with a smaller unionized company, the bill would make it possible for management to cease recognizing the union, with no election at all.

In a furious speech, CWA International president Larry Cohen charged that Democratic leaders had refused past requests to attach pro-union provisions to appropriations bills, but were allowing Republicans to use the FAA appropriation to force an anti-union change.

“The leadership in the Senate didn’t even see fit to include [the pro-labor NMB rule] in this gutting of the statute …” yelled Cohen.  “Our little crumb of an advancement is left as a rule, so the day that there’s ever a Republican president elected … they’re going to strip the rule.  The statute will remain.  It’s worse than it’s ever been.”

The Democrats passed the bill and the president signed it.

A White House official defended the deal, via email, saying, “While it is unfortunate that Republicans in Congress have injected extraneous ideological measures into this important legislation that will create jobs and improve air traffic safety, the provision referenced in our veto threat has been removed and the President will sign the compromise bill.”

The White House is unlikely to expect tremendous blowback from the bill, given that the AFL-CIO took no public stance on the FAA deal.  An AFL-CIO spokesperson declined to comment, but the federation’s silence may be related to the lack of unanimity among the 22 unions in its Transportation Division: While most were opposed, a few came out in support of the bill.

In a statement following its Senate passage, Air Line Pilots Association president Lee Moak said the bill “could have been improved by omitting provisions unrelated to aviation safety, but that compromise was necessary … to garner the very real benefits” of a reauthorization.

Unions’ division on this question illustrates U.S. labor’s political predicament as compared with Europe. Labor’s political influence over either major party is “180 degrees opposite from Germany, where both parties have a connection to the labor movement," author and labor attorney Tom Geoghegan says. "It’s a very sad and dangerous thing.”

Even with a presidential election looming, historian Steve Fraser says the Democratic Party understandably takes labor’s support for granted, because “the labor movement sees it has no other option, so its loyalty can be counted on.”

Indeed, the Republican primary campaign provides daily reminders of how much worse the political leadership in Washington could be: stacking the National Labor Relations Board with professional union-busters, refusing to bargain with public workers, reviving child labor.

The decline in union density, argues Fraser, creates a vicious cycle of decreasing power and increasing dependence. “A big part of the picture is the sense that there’s no exit from this strategy … The weaker they get, the more that they feel boxed in.”

There are many factors that explain the willingness of prominent Democrats to back a deal that makes union organizing harder: the broken Senate; the influence of big money; questionable tactics from all sides.  But the most fundamental one is the half-century decline in unionization, and with it, in labor’s role in American life.  Episodes like this one offer a stark challenge to those still hoping that transformed political fortunes will be the cause – rather than the consequence – of the labor movement’s revival.