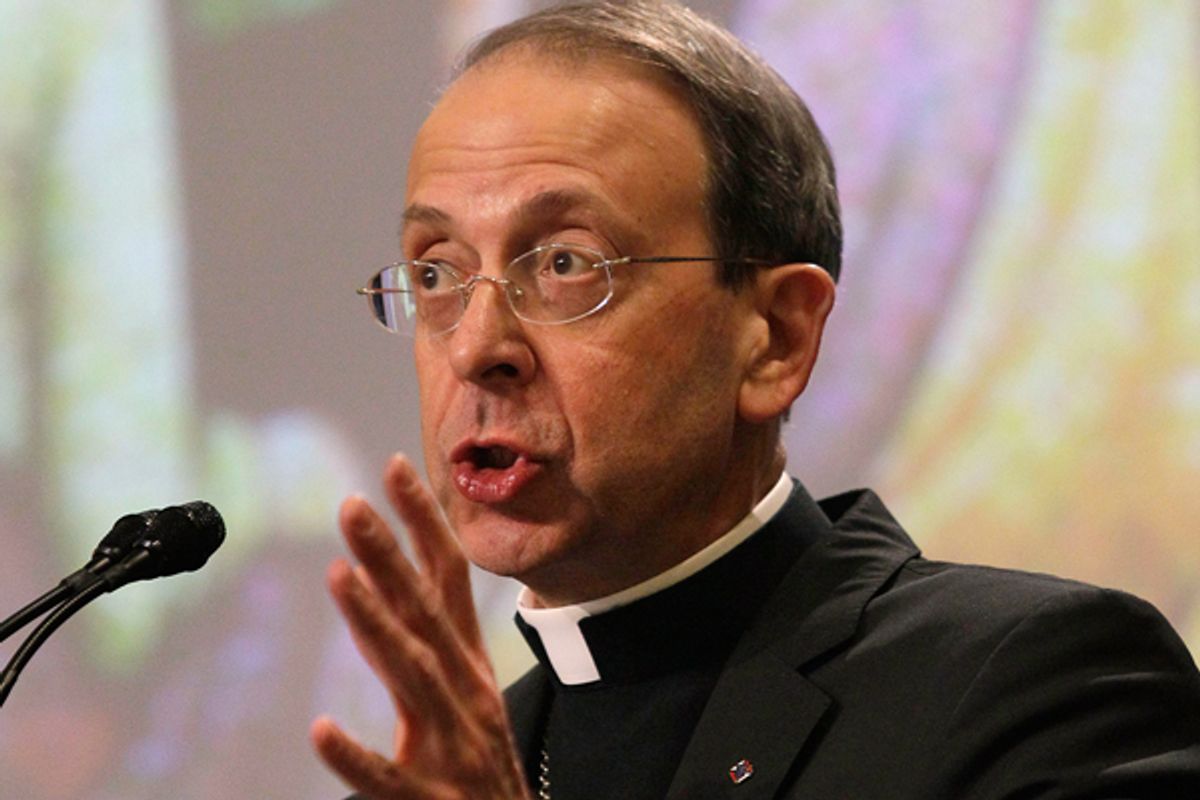 Republican Darrell Issa, chairman of the House Oversight and Government Reform Committee, will convene a hearing tomorrow, “Lines Crossed: Separation of Church and State. Has the Obama Administration Trampled on Freedom of Religion and Freedom of Conscience?”

The lead witness is the Most Rev. William E. Lori, Roman Catholic bishop of Bridgeport, Conn., and chairman of the U.S. Conference of Catholic Bishops’ Ad Hoc Committee on Religious Liberty. Judging from Lori and the rest of the witness list, it’s obvious that Issa has posed what he considers to be a rhetorical question and lined up nine like-minded rhetoricians to answer it anyway. None of the religious groups supportive of the Obama administration will be heard from.

Issa’s lead witness is also his lead cheerleader. Last year, after Lori testified before the House Judiciary Committee’s Subcommittee on the Constitution, and urged Congress to investigate, among other things, “illegal conditions” he claimed the Department of Health and Human Services was placing on faith-based contractors, Issa heeded his call.

Just over a month after Lori’s testimony, Issa held a hearing, “Health and Human Services (HHS) and the Catholic Church: Examining the Politicization of Grants.” The issue, as Republicans framed it: whether an HHS requirement that federal contractors providing services to victims of sex trafficking refer those victims for a full range of gynecological and obstetric care discriminated against the Catholic Church.

After HHS instituted the requirement for grantees under the National Human Trafficking Victim Assistance Program, it declined to renew a contract with the USCCB’s Migration and Refugee Services. The HHS grants fund neither abortion nor contraception, and do not require the contractors to, either. Rather, the new requirement merely dictated that sex trafficking victims be referred for those services, which the USCCB refuses to do.

Judging from the reaction of the bishops and their Republican supporters, though, you’d think that the primary concern was whether the bishops’ religious liberty would be violated by referring a 12-year-old survivor of sexual assault for an abortion, rather than the fact that a 12-year-old had been gang-raped and needed medical care. (Or, for that matter, why  any arm of the Catholic Church is qualified to provide care to victims of sexual assault, and in particular, why it should do so with taxpayer dollars.)

Never mind that there is, at best, a weak constitutional claim that recipients of federal funds are entitled to have the government customize taxpayer-funded grants to their particular religious requirements. Issa’s fellow Republican, Rep. Chris Smith, who is not even on the Oversight Committee, made a special appearance to charge that the administration’s “bias against Catholics is an affront to religious freedom and a threat to all people of faith.”

The same overheated rhetoric promises to permeate Thursday’s hearing. When he testified in October, Lori placed the contraception mandate front and center.

“The ‘preventive services’ mandate is but the first instance of conscience problems arising from the Patient Protection and Affordable Care Act,” he said, signaling, as the bishops’ missives this week have borne out, that they intend to continue picking away at provisions in the act in an ongoing effort to contrive violations of their religious liberty.

But Lori didn’t stop with healthcare reform. He also complained about the supposed infringement on Catholics’ religious liberty by same-sex marriage and same-sex adoption laws. The “root causes” of all these “threats” to religious liberty, said Lori, may lie beyond Congress’ purview. (That’s code for his church being centuries out of step with American public opinion and sexual mores.) But, he added, “we can — and must — also treat the symptoms immediately, lest the disease spread so quickly that the patient is overcome before the ultimate cure can be formulated and delivered.” By that, Lori means he wants Congress to legislate his complaints away, regardless of the impact on other Americans.

Eight out of nine of Issa’s witnesses are Orthodox Christian, Catholic and evangelical, and represent Christian institutions, one of which, Belmont Abbey College, has sued HHS over the contraception requirement. The sole exception is Rabbi Meir Soloveichik of Yeshiva University, an Orthodox rabbi who last week penned a Wall Street Journal Op-Ed with Cardinal Donald Wuerl, archbishop of Washington, and Watergate felon-turned prison evangelist Chuck Colson, claiming a united, ecumenical front against the contraception requirement. Wuerl, promoting dire slippery slope arguments, has compared the contraception mandate to the government requiring Catholic schoolchildren to watch pornography.

Wuerl and Colson are two of the most prominent supporters of the 2009 Manhattan Declaration, which laid the groundwork for today’s “religious liberty” campaign. Colson has compared supposed infringements of religious liberty to Nazism, and has said that Hannah Arendt’s "The Origins of Totalitarianism" is “prophetic in its application” to contemporary America.

Last week, the Manhattan Declaration website featured a blog post, “First They Came for the Catholics…, which linked to a Colson video in which he warned of the “possible necessity” of civil disobedience, a theme echoed by the Southern Baptist Convention’s chief lobbyist Richard Land and others. Kudos, of sorts, to the Wall Street Journal and Issa’s Committee; it is probably not easy to find a rabbi who will make common cause with someone who thinks that 2012 America is like Nazi Germany.

One name notably missing from Issa’s witness list: Sister Carol Keehan, president of the Catholic Health Association, which placed its blessing on the accommodation President Obama announced last Friday. Under the modified rule, insurance companies, rather than employers, will offer and bear the cost of providing contraception coverage to employees.

Sister Keehan, though, is on the skids with the bishops. Cardinal-designate Timothy Dolan, the USCCB’s president, told the Catholic News Service this week that he castigated Sister Keehan, via email, telling her he was “disappointed that she had acted unilaterally, not in concert with the bishops.” It seems that Issa, who is not even Catholic, is working like the devil to avoid having an email like that land in his inbox.