America's conversation about race has been mostly black and white. An amazing Knicks point guard changed that 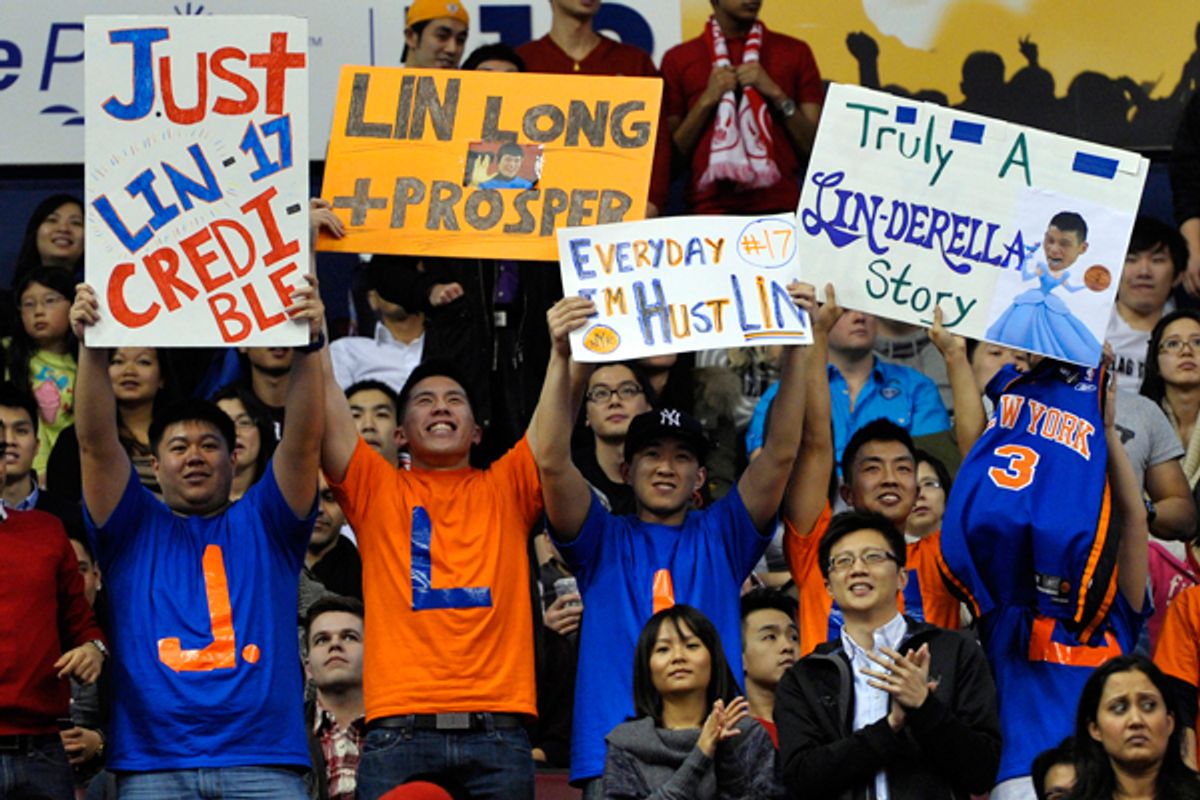 Fans of Jeremy Lin hold up signs during the second half of the New York Knicks/Toronto Raptors game on Tuesday. (Reuters/Mike Cassese)
--

I have never cared about basketball, ever. Not once. Yet inside of the last two weeks I have learned what a point guard is, what he does and why it matters. I had a roller-coaster night Saturday, when I wanted to watch a New York Knicks game for the first time, then learned that a squabble between Madison Square Garden and Time Warner has left about 1 million fans without MSG Channel (including me). I didn't even know how to start finding a bar with the game on -- something I've previously resented, in fact -- so I contented myself by watching the video diaries on Lin's YouTube channel.

Days later, sometime yesterday, in fact, when I caught myself reading a post about the couch Jeremy Lin slept on before his first night as the Knicks' new star point guard, I had two reactions. First, it didn’t look big enough for him. The next one: Wait, who am I -- and more important, what is happening to me? It was like I was in a "Portlandia" sketch about Linsanity.

The gated community that was the NBA has had a crasher arrive and jump the fence: JLin, the Linja, the Linsanity, Super Lintendo, the Yellow Mamba to Kobe Bryant’s Black Mamba. (Kobe learned this the hard way the other night, when the Knicks beat his Lakers, right after he had asked “Who is this kid?”) That nickname alone is as good a place as any to begin. Before Jeremy Lin arrived, there was not even the thought of a Yellow Mamba. There was no major Asian American NBA star who captured the hearts of fans. There were no fans wearing cutout masks of an Asian American player courtside as a group. Houston Rockets center Yao Ming may have been a forerunner, but he was an import, the beloved alien.

The NBA, much like America’s conversation about race, has been something of a black and white ball -- and Asian American stars were simply not invited to the dance. Consider the college coaches who overlooked him because they “didn’t have a frame of reference” for his talents, or the NBA teams that released Lin, suddenly red-faced as the moribund Knicks win six straight.

Whatever screen you're watching on, your phone, computer or TV, it's the Jeremy Lin show now, and the whole country is tuning in. The boxer Floyd Mayweather insisting that Lin’s only getting attention because he’s Asian — do we think Floyd knows anything about basketball? There are Pinterest posts of his sixth-grade class photo and endless online nickname contests. He's everywhere you look. When was the last time you saw a bigger crush of people trying to nickname a new star?

This urge to nickname Lin is an effort by people to act like they know him. What we're learning, however, is that he’s as difficult to pin down culturally as he is on the court. He continues to defy expectations. Maybe you thought there were no tall Asians, didn’t know about Asian Christians or didn’t think Asians could play basketball. Maybe you never cared about basketball, never cared about the Knicks. Or maybe you didn't need a crash course on what a point guard does. Maybe you thought you were done with Christian sports figures. Either way, chances are you've learned something new watching Jeremy Lin, about him, yourself and other people.

My first thought on seeing Jeremy Lin was that he reminded me of my cousins. Like many, I felt like I knew him. He’s a kind of kid I’ve seen my whole life — funny, smart, quick and brave. And Asian American. When I heard he was a Harvard grad, I thought: Of course, the first Asian American NBA superstar also had to go to Harvard and get better than a 3.0. And then: Way to raise the stakes on the Asian American overachiever. It’s still true that whatever color you are in America, if you’re not white you have to be twice as good to get half as far. But the Jeremy Lin paradox is that this champion -- this skinny kid just out of college, this overlooked smiling Taiwanese American kid with, as we say, 'the good Asian hair' that is thick and stands straight up -- he is making room for the rest of us. Part of the Jeremy Lin moment is America looking at an Asian American and realizing he’s just an American, too.

The great irony to his moment is that Jeremy Lin as a national figure is so much better than anyone I might have dreamed up as a possible solution to a problem with a body count: Asian Americans are currently the No. 1 most bullied demographic in America. The same invisibility that kept Jeremy Lin outside the “frame of reference” of coaches also kept the two different units who hounded Cpl. Harry Lew and Pvt. Danny Chen to suicide last year with constant racist taunts and physical abuse from realizing they were well outside the limits of respectful internal military discipline.

It would be laying way too much on Jeremy Lin to ask him to help turn this around, as if he didn’t have enough to do as point guard for the Knicks. But we don’t have to ask him — it is already just happening. Jeremy Lin’s getting slapped around a lot at Madison Square Garden, but it’s all love — when he drained that game-winning three-pointer in the last half-second against Toronto Tuesday night, he was covered in punches -- the kind you can only give the hero who pulls it out of the bag. I still have a strange impulse when I see him, like I want to run out there, help on defense — me who has never played basketball! — or yell “Back up off the skinny kid!” even when they rush him with love. It’s just from a whole lifetime of watching bullying happen, a lifetime of people — white, black, Latin — coming up to me, my brother, my sister, my cousins, muttering under their breath “Ching Chong Ching Chong,” the prelude to a beating. But it’s only post-traumatic stress disorder; it’s not the present. No one on the Knicks is saying that to him. He has this.

And while Jeremy Lin may not single-handedly make all of the bullying go away, somewhere in America, at least one Asian American kid right now is getting invited into a pick-up game instead of cornered and beaten. That’s the game that matters, more than anything you’ll see during a Knicks game. And Lin is helping win that one, too.