Is the Iran threat an illusion?

The nation's recent moves look increasingly like those of a desperate regime, not a war machine 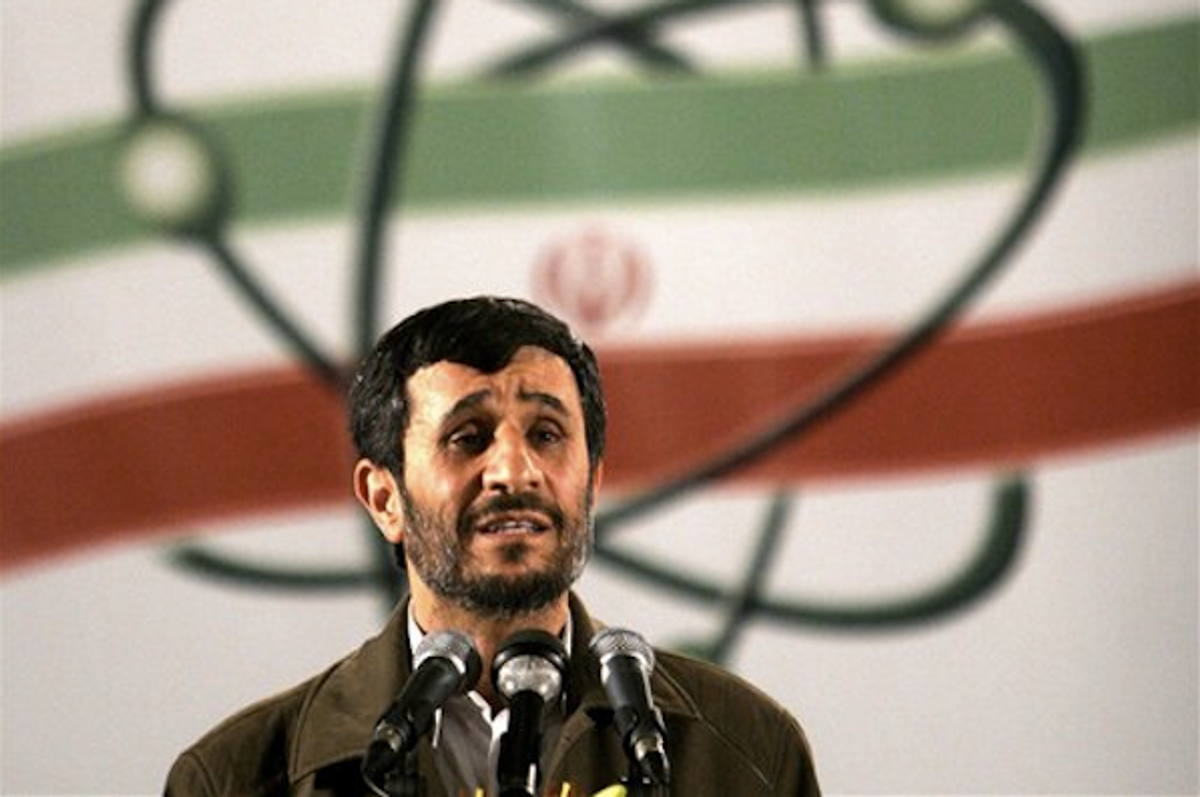 As a tit-for-tat war rages in the shadows between Iran and Israel and some are seeing signs of serious duress in Tehran.

Israel’s Prime Minister Benjamin Netanyahu and some right-leaning voices in the United States, including most of the GOP’s presidential contenders, continue to pound the war drums over Iran’s nuclear program.

But over the past several months, the image of the regime as a snake coiled to strike has lost some of its appeal to Iran observers. The erratic and often amateurish mix of bungled attacks and histrionic threats has prompted a reassessment of Iran and its putative allies.

Its thwarted attempts to assassinate Israeli and Saudi diplomats, stubborn defense of — and covert aid to — the bloodthirsty Syrian regime and its inept economic policy moves and apparently empty bluster about closing the Strait of Hormuz all have contributed to the belief that Iran may not be the fearsome adversary its president, Mahmoud Ahmadinejad, would have us believe.

“Iran’s recent threats to close the Strait of Hormuz are almost certainly just that — empty threats,” wrote Aref Assaf, an Arab-American scholar on Middle Eastern affairs. “But it is the sort of ill-conceived bluster that could have unintended consequences.”

Only recently, it was an article of faith among most Western experts that Iran’s influence and power would inevitably rise in this decade, particularly after the U.S. installed an Iran-friendly Shiite government in Baghdad.

But in the past six months, a combination of greatly improved Western economic sanctions, covert action by Israel and other intelligence agencies aimed at Iran’s nuclear establishment and the continuing instability of the Arab Spring has severely tested the regime’s ability to hold together the domestic constituencies that keep it in power.

There was first the bold challenge to the regime laid down by the country’s Western-oriented urban elites after President Mahmoud Ahmadinejad’s brazenly stolen reelection in 2009, then the recent collapse of the Iranian currency.

The country’s economic crisis has sustained the smoldering resentment of Iran’s elites, whose 2009 protest was crushed by the regime’s security apparatus and its fanatical militia. A barely concealed power struggle between Ahmadinejad and Iran’s Supreme Leader, the Ayatollah Khamenei, has raged ever since.

Tehran has also proved unable to get out ahead of popular uprisings in the Arab world — even in Shiite-majority Bahrain, where Saudi allegations of Iranian agitation are mostly imaginary.

Just last week, Hamas, the Palestinian political movement regarded as a terrorist group by the U.S. and EU, agreed to a power-sharing agreement with its rivals in the Palestinian Authority, a move that could end Shiite Iran’s role in arming and funding Sunni Hamas — as well as its bid for influence there.

The deal could prove illusory, as several previous ones have, but the reconciliation brokered by Qatar’s relatively liberal Gulf monarchy will certainly have included demands from the PA that Iranian influence be kept at bay.

This Iranian losing streak — coming with the region in flux and both American and Al Qaeda’s influence arguably also in decline — has surprised Western intelligence analysts who have long regarded Iran and its Lebanese protégé, Hezbollah, as possessing formidable disruptive capabilities.

Of course, this can change quickly should Iran’s Revolutionary Guard, the terrorist syndicate that protects the regime’s power base, decide to mount a major terrorist attack somewhere.

Hezbollah, which Iran supplies with arms and funding, also has a history of violent attacks — ranging from its role in the destruction of the U.S. and French military barracks in Lebanon in the early 1980s, to a murderous attack on an Buenos Aires Jewish organization in 1994 that killed 84 people, to the 2006 “missile war” with Israel.

The decision to unleash a wave of suicide bombers targeting Israeli diplomats is real enough. But even here, it has only added further to evidence of disarray in Tehran.

Thai police believe an abortive attempt to bomb Israel’s embassy there Tuesday (the bomber blew his legs off instead) can be traced to an Iranian cell in the country. They held two Iranians, including the luckless, legless bomber, Wednesday.

Some in the Israeli military and intelligence agencies have come to see more desperation than dastardly competence in Tehran’s recent behavior.

Even some notable hawks in the U.S. security establishment have retracted their talons. Patrick Clawson, director of the Washington Institute for Near East Studies, published a paper last week arguing that the latest round of sanctions implemented by the EU and United States have had significant effects on Iran.

Alone, Clawson writes, they probably are not enough to force Iran to stop enriching uranium. But he goes on to say that a military strike will not work — indeed, that it would likely be deeply counterproductive in the long run.

Rather, he says, there are better ways to bring Iran to heel. Ever-tighter sanctions could exacerbate the effects of broader regional changes, including the rising appeal in the region of Turkey’s secular democracy as a model, the discrediting of Iran’s ally Bashar al-Assad in Syria and impatience on the part of Russia and China with Iranian behavior.

“The Iranian nuclear impasse is not an easy problem to solve. But, in fact, the Obama administration is more correct than the pessimists when it sees room for action in 2012 on all these fronts. The Iranian nuclear problem is very unlikely to be resolved any time soon, but progress can be made,” he said.