Israelis prepare for war with Iran 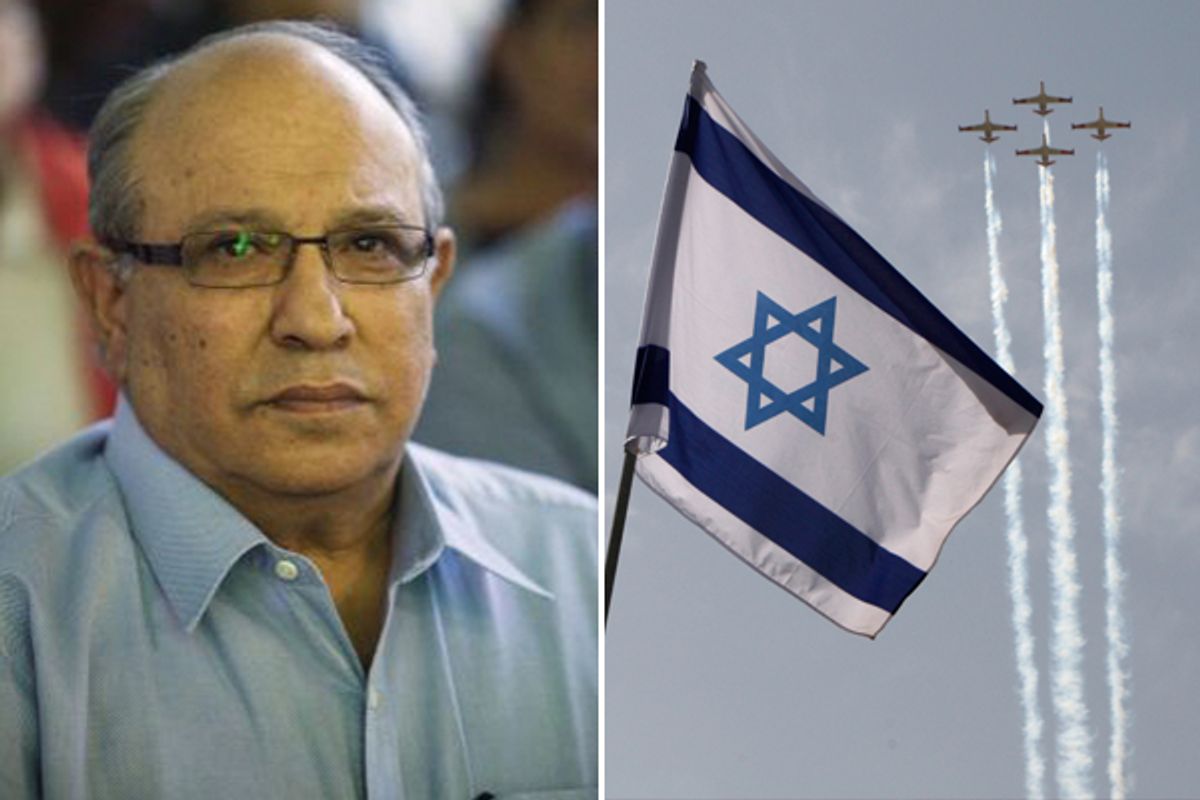 JERUSALEM -- After bombs went off near Israeli embassies in New Delhi and Tbilisi, and a man with an Iranian passport accidentally blew himself up in Bangkok, Israeli Prime Minister Binyamin Netanyahu couldn’t let the opportunity pass. Yediot Aharonot, the country’s most widely read newspaper, reported Wednesday:

An updated list of talking points distributed by the national advocacy desk in the Prime Minister’s Office  sought to connect the wave of terror with the international community’s efforts at tightening sanctions on Iran, and also to prepare the ground for a military option to stop Iran’s nuclear program.

According to Yediot, the new talking points read: “Iran and Hizbullah are behind these terror attempts. If this is what Iran is doing now, imagine what it will do if its nuclear arms project reaches the goal.” The tabloid's story was headlined “Iran’s long arm,” and the subhead read, “Israel to the world: ‘Terror acts show nuclear Iran cannot be allowed.'" The story’s ominous tone meshed perfectly with the talking points.

Israel’s whole body politic – politicians, media, influential public figures and public at large – is  now leaning into a war with Iran. Defense Secretary Leon Panetta’s recently reported opinion that Israel would likely strike between April and June is shared, give or take a month or two, by countless others.

The consequences of such an attack range from a bilateral missile war and intensified international terror attacks, to a regional war involving weapons of mass destruction. Israel may not pull the trigger, of course. But at this point, that seems the only realistic working assumption.

Israeli talking points are coming faster and sharper. Iran’s nuclear project is marching toward the “zone of immunity,” says Defense Minister Ehud Barak. “It is our duty to rely on ourselves when we are concerned with a threat to our very existence,” says Netanyahu. Their apparent aim is to create an aura of inevitability around an imminent Israeli strike. Leading the drive, Netanyahu and his one-time army commando unit leader, Barak, want full support at home and no serious opposition from the U.S. if and when they send the jet bombers on their mission. Naturally, they would prefer that the U.S. do the job – inflicting lasting damage on Iran’s nuclear infrastructure could well be beyond Israel’s military capability – but from here, at least, the American military option looks unlikely, certainly within a time frame Israel accepts.

Some skeptics think Netanyahu and Barak may just be engaging in psychological warfare aimed at keeping Western economic pressure on Iran, the goal being to force or scare the Tehran regime into giving up its pursuit of nuclear weapons, which it denies pursuing. But it’s hard to imagine anything short of visibly destroyed hardware on a massive scale that might convince Israel’s leadership that the nuclear threat had been lifted.

Yet while there is skepticism about the leadership team’s true intentions, there is virtually none being expressed here about the wisdom of going to war. The paucity of dissent is remarkable, not to say depressing, in a country that prides itself on being a “vibrant democracy.”

At the end of last week, the media were talking about which towns had good bomb shelters and air raid sirens and which didn’t. The likelihood that Israel would soon be attacking Iran had begun to sink in. An antiwar demonstration was held across the boulevard from the Defense Ministry compound in Tel Aviv. About 25 people showed up. They held signs that read, “Don’t bomb – talk” to the evening rush hour traffic going past. One driver honked.

I asked a sidewalk passerby, a woman in her mid-20s pushing a baby carriage, what she thought of a possible government decision to bomb Iran. “They sit up there, they’re smarter than me, whatever they decide, I’ll support,” she said. A fellow of about 20 on a skateboard said: “I’m not for war, I’m against war. But if somebody is going to attack you, if your enemy is going to attack, don’t you think you have to attack him first, for the sake of survival?” I asked if he thought Iran would attack Israel first. “I don’t know, I’m not privy to all the information. But good luck,” he said, and skated off.

For all the famous outspokenness of Israeli politicians, not one is speaking out against an attack, not from the moderate opposition nor the “peace camp.” Peace Now, a group that has organized huge demonstrations going back 30 years against the Lebanon War and the occupation, has said not a word about the extraordinarily high-risk war of choice that looms in the very near future.

The news media, with the exception of the liberal Ha’aretz newspaper, is fully on board. The mainstream media reflect and reinforce public opinion, which shows weariness with settlement-building and settlers, but automatic support for any decision taken in the name of security, especially in the face of a nuclear threat from a regime like Iran’s.

The tone is set by the red-on-black scare headlines in the tabloids and the grim facial expressions and bracing reports from correspondents on Channel 2, which dominates TV news. On the night of the Bangkok bombing, Ehud Ya’ari, dean of the country’s so-called Arab affairs correspondents, reported that Iranian President Mahmoud Ahmadinejad was expected on Wednesday to inaugurate the uranium enrichment facility in Fordo, a site built deep underground in the side of a mountain. “Thus,” said Ya’ari, “Iran’s nuclear project enters what Defense Minister Ehud Barak calls the ‘zone of immunity.’” Draw your own conclusions, folks.

Except for Gideon Levy at Ha’aretz, no well-known newspaper columnist or TV commentator has come out against a war; nearly all are worried and noncommittal. But one of the most influential columnists, Yediot’s Sever Plocker, a passionate centrist with long-standing contacts around the Israeli establishment, wrote a column Tuesday titled “Israel won’t blink first.” Declaring that “the State of Israel, as the national home of the Jews, has decided to prevent Iran from possessing nuclear weapons,” Plocker maintained that unless Iran freezes its nuclear weapons program and allows international inspectors into the underground sites and even the “secret” ones, “zero hour” will soon arrive. “No begging will stop Israel at that point. There will be a war,” he wrote.

Meanwhile, the literary triumvirate of Amos Oz, David Grossman and A.B. Yehoshua, Israel’s loftiest voices of peace and enlightenment, have remained silent. President Shimon Peres, who has put his days as a peacemaker far behind him, is warning only about the dangers of a nuclear Iran and not at all about those of an Israeli attack.

So what’s going on? What is this lockstep march to war in a country that made peace with Egypt and Jordan; that at times tried to make peace with the Palestinians; that absorbed missile attacks from Saddam Hussein in the first Gulf War yet held its fire at America’s behest; that had “warriors for peace” in the Prime Minister’s Office, “peace governments” and a “peace camp”?

It’s all gone. Since the Palestinian intifada ended the “peace process” in 2000, Israelis blame everything that goes wrong, every political dispute, violent or nonviolent, completely on the other side. No politician, commentator or other public figure who seeks mainstream approval can be thought of as “weak on security” or “naïve about the Arabs.”

Yet the reaction to the Iranian nuclear threat has deeper roots than that. While Netanyahu is known for his Holocaust analogies on this issue, his predecessors going back to Yitzhak Rabin 20 years ago have all lobbied the world to stop Iran from going nuclear, which has been marked “unacceptable.” Since Menachem Begin ordered the 1981 attack on Iraq’s reactor (over the opposition of Peres and war heroes Moshe Dayan and Ezer Weizman), Israel has lived by the doctrine that no enemy in the Middle East will have nuclear weapons. After the 1981 attack, it acted on this doctrine a second time in 2007, under Prime Minister Ehud Olmert (and defense minister Barak), with the airstrike on Syria’s embryonic nuclear facility.

So the issue for Israel isn’t just the Iranian regime’s jihadist craziness and Holocaust denial. Israel bombed the Iraqi reactor when Saddam Hussein was the Reagan administration’s man in the Gulf against Iran. It bombed the Syrian installation before Bashar Assad started slaughtering Syrians en masse, when he was offering Israel land-for-peace negotiations.

While it’s true that Iran isn’t just any Middle Eastern enemy, the Israeli doctrine applies to all of them.

Only one person has made a real effort to reverse the country’s course, and lately he’s given up, too. At the start of last year, upon finishing his legendary tenure as Mossad chief, Meir Dagan, then the country’s unchallenged supreme warrior, did the unprecedented. He began speaking out openly against an attack on Iran, calling it “the stupidest idea I’ve ever heard,” and warning that afterward, “the regional challenge that Israel would face would be impossible.” He was going public, he explained, because “there is no one to stop Bibi and Barak” from undertaking such a “dangerous adventure” now that he and the other military and intelligence chiefs, who had the clout to rein in the political leadership, were retiring.

Last week, after months of silence, Dagan resurfaced to announce he’s heading a new NGO to change Israel’s parliamentary system – an old chestnut of the good government movement that seems conspicuously irrelevant now. For nearly a year, Dagan raised a flag, and when he saw hardly anyone behind him, he lowered it. A few high-level ex-warriors, including two former army chiefs of staff, warned against the consequences of attacking Iran. But these were isolated remarks that got very little attention; in the public’s mind, the antiwar movement began and ended with one man.

I asked a retired army general who agrees with Dagan’s views why he and the many others like him didn’t get together and sign a letter in a major newspaper, or hold a press conference, or do something that might start a public debate over this fairly fateful matter; after all, Israelis listen to generals. He replied that he and his fellows didn’t have the information that those around the cabinet table had, they didn’t know if the government really intended to order an attack, and they didn’t want to take the chance that this was all “psychological warfare,” which they would be undercutting if they spoke out.

“You have to understand,” he said, “Israel is a small community, everybody knows everybody else’s opinion, so you have to be responsible. That’s the way I was educated.”

No opposition – that’s what Netanyahu and Barak want, and at home, that’s what they’re getting.

As for opposition from the Obama administration, it has been awfully muted. The Republican presidential candidates (with the exception of Ron Paul) have  been gung-ho, which has much to do with the administration’s wariness toward Israel in this election year. But then how strong an argument for restraint can the administration make to the Israelis, after repeating for years that a nuclear Iran is “unacceptable” and that “all options are on the table”?