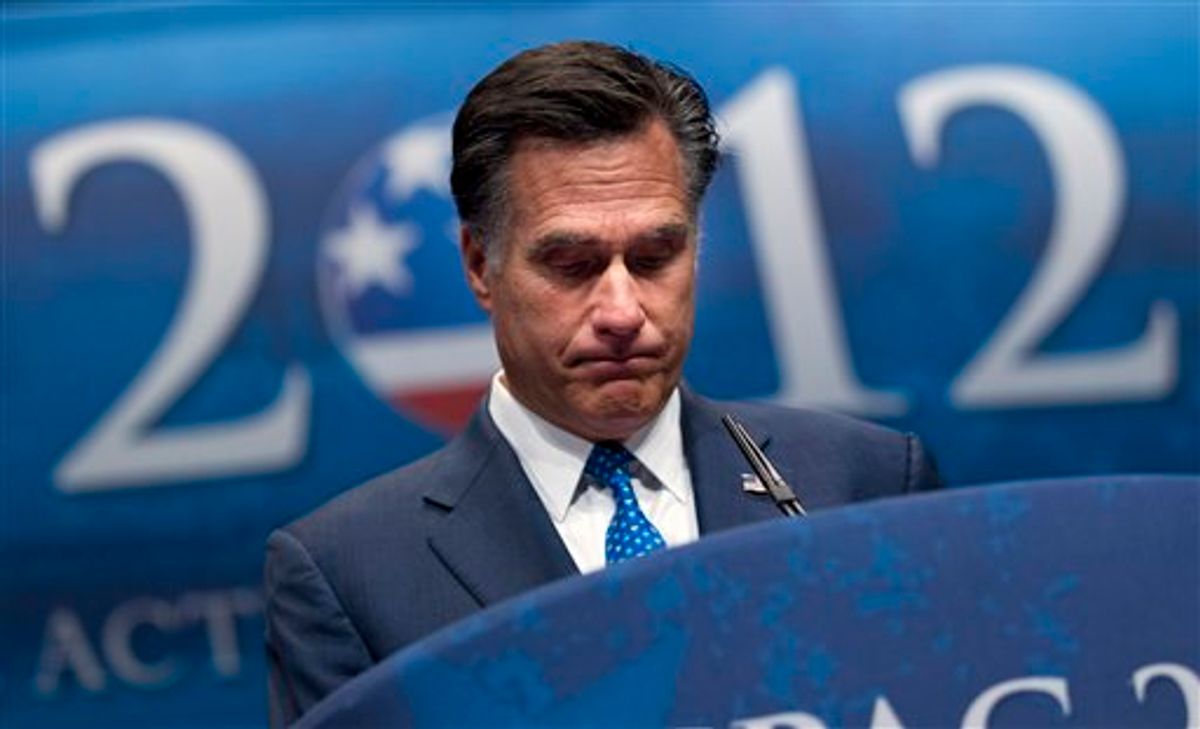 The timing couldn't have been worse for Mitt Romney when the Iowa Republican Party retracted its declaration that he'd won the state's caucuses and instead awarded the win to Rick Santorum on Jan. 19. The reversal came just two days before the South Carolina primary, as Romney's once commanding lead in the state was melting away and Newt Gingrich was overtaking him in the polls. The news, which nullified Romney's impressive-sounding distinction as the only modern GOP candidate to win both Iowa and New Hampshire, meshed perfectly with the idea that he was melting down (even if it did nothing immediate to boost Santorum).

And now there's a possibility that something similar could play out in the near future, this time thanks to the ineptitude of the Maine Republican Party.

The state GOP had given local communities a one-week window from Feb. 4-11 to hold caucuses, with the statewide tally announced last Saturday night. At that point, Romney was declared the winner by 194 votes (or a 3 percent margin) over Ron Paul. But there was a catch. Several communities had flouted the state party's edict and held or scheduled caucuses outside of the designated window, while one county -- Washington -- had been forced by threats of inclement weather to postpone caucuses that were originally scheduled for Feb. 11 by a week.

At first, this didn't seem like too big of a problem. Not counting votes from places that willfully ignored the window seemed reasonable enough; if they'd wanted to be part of the statewide tally, they could have followed the rules. And while Washington County did attempt to follow the rules, it seemed unlikely that the results from caucuses there would, when they were finally announced, alter the statewide outcome, given how low turnout in the county was for the '08 caucuses and how poorly Paul did back then (eight votes).

But since last Saturday, some major errors in the state GOP's official tally have come to light. As the Bangor Daily News reported this week:

However, a review of the town-by-town results released Saturday by the Maine GOP suggests that some communities that had caucused prior to Feb. 11 were not counted. Nearly all Waldo County towns held caucuses on Feb. 4 but those towns were blank in the results released by the state party. Additionally, Waterville held its caucuses ahead of time but were not included in the results.

Waldo County GOP Chairman Raymond St. Onge said the results were sent to the state party on Tuesday, Feb. 7. He said those results probably would not have changed the outcome but was disheartened the votes were not included.

“They said it was a clerical error,” St. Onge said. “I’m going to believe them because there were other errors that occurred. I don’t think it was intentional because our results wouldn’t have changed the winner.”

While St. Onge, the Waldo County chairman, says the omitted results wouldn't have changed the statewide outcome, they could have cut into Romney's margin. The same is true for Waterville, a city of about 17,000 people (10th largest in the state) in Kennebec County. There are other potential issues too. But so far, the state GOP is refusing to address the complaints or to alter its declaration of a 194-vote Romney victory.

But the questions may not go away. Washington County's caucuses will be held this Saturday, and media outlets will surely be watching the results closely. It's true that Paul fared poorly there in '08, but he clearly has more support now; the question is whether he's gained enough ground to beat Romney, and if he can do so by a margin big enough to cast new doubt on the statewide totals. The more Paul cuts into Romney's lead on Saturday, the more pressure there will be for the state party to review the previous results.

The wild card in all of this is turnout on Saturday. Because it was so low statewide -- just over 5,000 -- a big spike in interest in Washington County could have a real impact. As Bill Nemitz of the Portland Press-Herald said on Rachel Maddow's show last night, "the amount of attention focused on Washington County is unprecedented and their turnout on Saturday might eclipse the turnout from the rest of the state this past weekend."

If Romney's victory is ultimately overturned, timing will be key. Currently, the state GOP isn't scheduled to meet until March, the Saturday after Super Tuesday. Depending on how the GOP race is progressing, having his Maine win tossed out then could be a serious blow to Romney -- or it might not matter at all, if he's coming off a series of big victories. But the timeline might also speed up. If (and it's a very big if) Paul scores an emphatic victory in Washington County this weekend, it will be a lot tougher for the state Republican Party to run out the clock on this one.