Rooting for your own kind 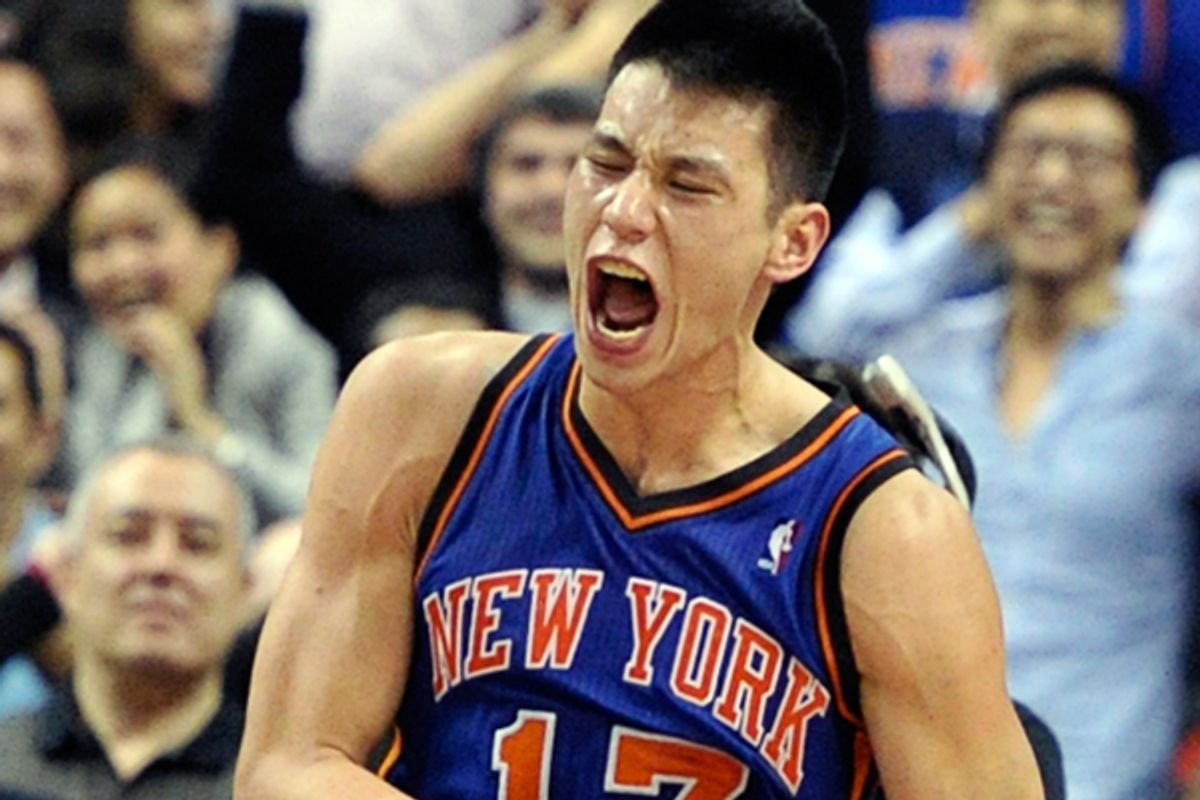 Why so excited? (Reuters/Mike Cassese)
--

Lin-sanity has broken out all over the world. The kid nobody in the NBA wanted, from an ethnic group about as associated with the NBA as bullfighters are with People for the Ethical Treatment of Animals, had just broken Shaquille O’Neal’s league record for the most points in his first five games as a starter. Adoring fans are holding up signs saying “To Lin-finity and beyond.” The Lin-ternet has broken under the strain of millions of tweets, many of them featuring even worse puns than “Lin-ternet.” Sports Illustrated put him on its cover.

And, of course, Asian-Americans are going wild.

I’m one of them. As a half-Japanese, half-white ex-jock, I’ve always followed and rooted for that tiny number of Asian-Americans who make it in any of my three favorite sports, the all-American Big Three of football, basketball and baseball. (There are lots of Asian baseball players, but not many Asian-Americans.) Half-Japanese players get even more points. The triumphs of Olympic speed skater Apolo Ohno had me feeling my half-breed oats. And when former Giants’ hurler Atlee Hammaker, a hapa like me, melted down in the 1987 playoffs, my inner mulatto got a lot more tragic.

There’s no great mystery why I root for Asian-American jocks. It’s the same reason any member of a minority group pulls for one of their own: racial pride and solidarity. There are so damn few of “us” in the big leagues (I’m an “us” with an asterisk) that when one makes it, it’s cause for celebration.

The first thing to note about Lin-mania is that America is basically just fine with it. The mainstream media features photos of Asian fans wearing Lin T-shirts and runs stories in which they are quoted as expressing racial pride. It is all deemed benign and heartwarming, a multicultural Cinderella story in which everyone wins. The Asian kid overcomes impossible odds and racial stereotypes – if white men can’t jump, Asian men are not even supposed to be able to hop – to make it in the NBA. Horatio Alger meets the Statue of Liberty in the land of the melting pot.

But race is such a minefield in American society, and honest conversation about it is so constrained by politically correct politeness, that even the Lin story makes people tongue-tied, as if they thought that admitting that yes, people root for players because of their race would cause the Ku Klux Klan to rise again.

Case in point: an ESPN panel’s reaction to boxer Floyd Mayweather’s now-notorious tweet in which he said, “Jeremy Lin is a good player but all the hype is because he’s Asian. Black players do what he does every night and don’t get the same praise.” The latter part of Mayweather’s comment, implying that black players are not praised the way Lin has been because of racism, is a total crock, another one of Mayweather’s heavy-handed attempts to provoke a race controversy. But his comment that the hype over Lin is because he’s Asian is clearly true. Not all the hype, but most of it – and the most interesting part of it – is precisely because Lin is Asian. Does anyone think SI would put Lin on the cover if he were black or white?

This is so obvious that it strains credulity to think that anyone would even try to dispute it. And yet when four panelists on ESPN’s First Take were asked to comment on Mayweather’s comments, only one of the four, Bomani Jones, was able to forthrightly acknowledge it. Absurdly, sports reporter Beto Duran actually denied that Lin’s race had anything to do with the hype, saying it was simply because “he’s balling.” Eventually, they all admitted that race played a role in the hype, but their reluctance to go there spoke volumes about how radioactive all discussions of race in sports continue to be.

And the Lin story is the most non-threatening possible race-in-sports story, one involving a societal minority group that is also so underrepresented in the NBA as to be positively exotic. If America has trouble admitting that it’s OK for Asians – or members of any other race, for that matter – to root for Jeremy Lin because he’s Asian, just imagine how it deals with the issue of white people rooting for athletes because they’re white. Even to suggest such a thing is considered way out of bounds.

But there’s nothing wrong with it. I’ve been doing it for years. And it’s completely racially innocent.

Just as the Asian part of me celebrates the unlikely success of Jeremy Lin, the white part of me celebrates the almost equally unlikely success of New England Patriot running back Danny Woodhead. Rooting for white players who break out of racial stereotypes is harmless. It does not mean rooting against black players or those of any other race. It’s fun. And I suspect a lot of other people do it, too.

I’m not talking about Rush Limbaugh and his followers, most of whom I suspect are bigots who are rooting against black players as much as they are rooting for white ones. (In a brilliant, half-crazy 2003 essay in the New York Review of Books, “The White Man Unburdened,” Norman Mailer argued that one of the reasons Americans supported Bush’s Iraq war was that so many reactionary white men needed to regain a masculinity threatened when their white sports stars were replaced by blacks.) I’m talking about people who are able to acknowledge the reality that white running backs and cornerbacks are almost as rare as Asian point guards, and are sufficiently free from racial uptightness or self-consciousness to root for them for precisely that reason.

I’ve never agreed with the quasi-official view, expressed in endless “diversity” seminars held by big corporations and piously promulgated in schools and universities, that everyone is to some degree a racist and needs to engage in constant Maoist “constructive self-criticism” to become more racially enlightened. That ortho-liberal view has always struck me as a sterile guilt-trip, a recipe for racial constipation that only breeds more racial animosity and misunderstanding. However, it does contain a grain of truth. Everyone is not a racist, but everyone is aware of race. Unfortunately, much of the time this awareness is lugubrious and heavy, both because of America’s long and painful history of racism and because we haven’t come up with any lighter ways of dealing with race. Sports offers one of those ways.

When I root for white NFL players like Danny Woodhead or retired New York Giants’ cornerback Jason Sehorn, or white 2004 Olympic 400-meter gold medalist Jeremy Wariner, I’m not rooting against black athletes. In fact, the very fact white running backs or cornerbacks or 400 runners are so rare is a testament to the sheer dominance of African-American athletes at those ultimate bad-ass positions. It just makes my white-boy self happy to have a few Caucasians in that Olympian company. It’s exactly the same attitude expressed by Charles Barkley when he says, “Steve Nash is one bad white boy.” Is acknowledging this really going to make Lester Maddox rise from the grave, baseball bat in hand?

I suspect that many of those white fans who do root for unlikely white stars are uneasy about acknowledging it for the same reason that they (rightfully) believe that only blacks can use the n-word. It’s the liberal racial double standard, which is predicated on the fact that racism, in particular bigotry against black people, is still very much alive. (Have you checked out the GOP primaries lately?) Charles Barkley is allowed to say “Steve Nash is one bad white boy,” but white people are not, because when they do, it could be construed as racism. White talk about race in America is governed by a priori semiotic censorship: Any statement that could be interpreted as racially suspect is ruled out.

This prior restraint on white speech makes sense in some areas. If someone goes around complaining that white people are all discriminated against and black people get all the breaks, and celebrates some white businessman for that reason, he’s either a fool, a racist or a demagogue. (See above comment about the GOP primaries.) But cheering for white running backs or cornerbacks is different. They aren’t discriminated against. It’s just that 99 percent of the time, they aren’t good enough to play the position. That’s a fact. And when they do make it, it’s fun to identify with them.

It would be stupid to make too big a deal out of this. It’s strictly lighthearted. It’s a holiday from racial politeness, a bit of benign tribalism. I don’t usually hold with tribalism, but we all have a little of it in us, and as long as it’s innocent, we might as well enjoy it from time to time. Besides, as someone who has covered three Olympics, I can attest that national tribalism trumps racial or ethnic tribalism. Every red-blooded American, of whatever race, watching the finals of the 4x100-meter relays at Sydney or Athens was for that moment an honorary black person.

And anyway, it’s all changing. When I saw Chinese hurdler Liu Xiang win the 110 meter hurdles in Athens, I knew that the world of sports would never be the same again. Races and ethnicities are mixing more and more, old athletic stereotypes are dying, and great athletes are popping up in the most unexpected places. Right now, the Jeremy Lin show has captured the world. Tomorrow, a black hockey player will challenge Wayne Gretzky as the Great One, or a heavyweight champion will come from Iceland. The infinite diversity of the human race is displayed in all its glory in sports, and there’s nothing wrong with appreciating every last part of it. Even if it means rooting for a bad white boy.