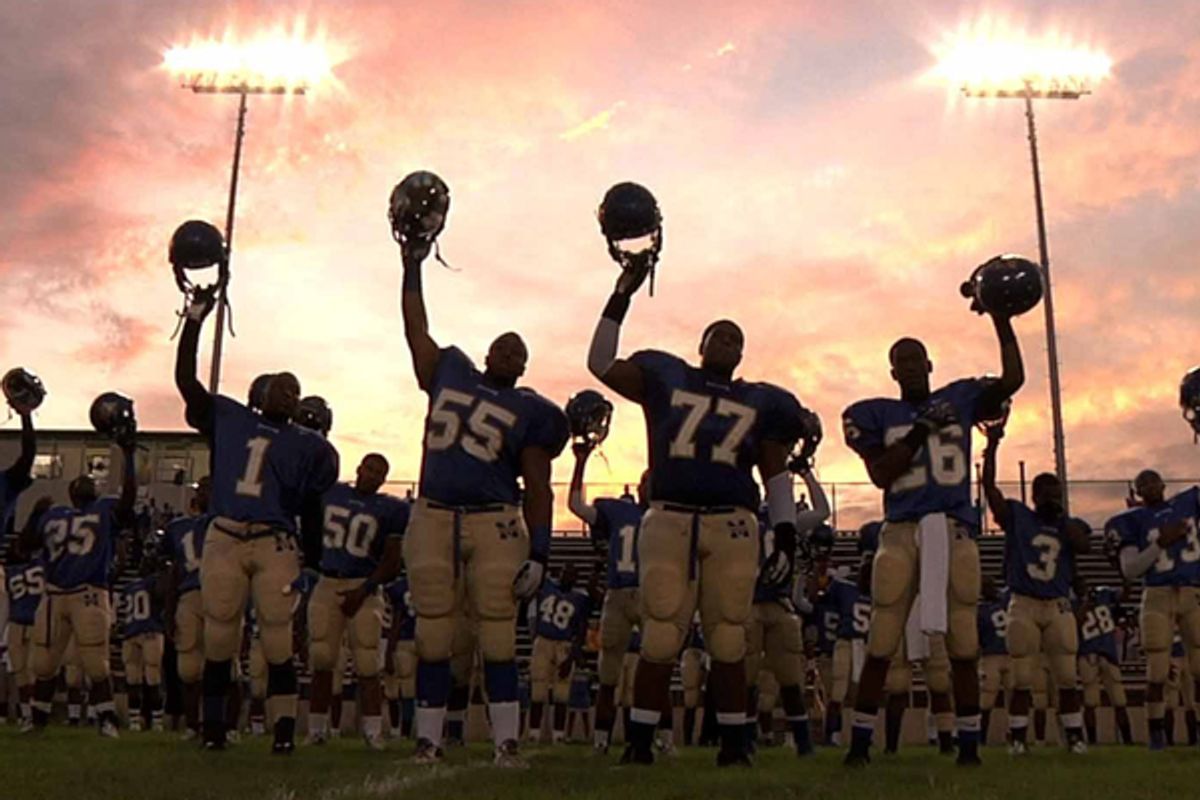 A still from "Undefeated"
--

If puzzling out the Oscar vote involves trying to mind-read the electorate of the world's weirdest small town, then the Academy's documentary category is more like a tiny Alpine village. People watching the Oscar ceremony probably don't realize that the best documentary award is not voted on by the entire membership (although that's supposed to change next year). Michael Moore recently observed that when a documentary filmmaker gets to stand on the stage of the Kodak Theatre and thank the Academy, he or she is really thanking 5 percent of the Academy -- and Moore's guess was way too high.

In fact, there are reportedly 157 members in the Academy's documentary branch, which is about 2.5 percent of the total membership. Until recently that tiny group was seen as a bunch of hidebound conservatives, notoriously resistant to new aesthetic and narrative approaches to documentary film. There's really no way to exaggerate the strangeness of this category over the years, or the number of important films that have been completely overlooked. The most famous non-nominees include "The Thin Blue Line," "Roger & Me," "28 Up," "Hoop Dreams" and "Grizzly Man," and it's absolutely not coincidental that I've just cited films by Moore, Werner Herzog, Steve James and Errol Morris, all of them controversial figures whose work flies in the face of long-standing cinéma-vérité convention.

On the other side of the ledger, the list of winning and nominated features over the decades of the award's history have an irresistibly random quality; as filmmaker and blogger AJ Schnack recently told me, the winners have included Jacques Cousteau, Walt Disney (twice apiece) and the Department of the Navy. Trying to pick the single most bizarre Oscar-winning documentary, one faces an embarrassment of riches. Is it "The Hellstrom Chronicle" (1971), which combines bogus science and genuine stop-motion photography to suggest that we'll all be eaten by bugs? Is it Peter Watkins' terrifying "The War Game" (1966), which depicts the effects of a hypothetical Soviet nuclear attack on Britain and can only be considered a documentary by stretching the term beyond all recognition? I'm going with "Design for Death," an anti-Japanese agitprop film from 1947 that reportedly featured faked archival footage and was mostly written by Theodore Geisel (aka Dr. Seuss).

You can definitely discern streams or currents in the documentary category; most famously, between 1995 and 2000, five of the six Oscar-winning films were about Jewish and/or Holocaust-related topics. (Spike Lee got in trouble for observing that his 1997 film "4 Little Girls" had no chance up against "The Long Way Home," a film about Jewish emigration to Israel. He was right.) In 1994, the year the Academy spurned "Hoop Dreams," it awarded the Oscar to "Maya Lin: A Strong Clear Vision," a little-seen film made by Freida Lee Mock, who happened to be governor of the Academy's documentary branch at the time.

In recent years, the documentary branch has veered from righteous political anger to a desire to reward films that reach out to broad, general audiences. So we get Oscars for Alex Gibney's "Taxi to the Dark Side" (2007) and Jean-Xavier de Lestrade's "Murder on a Sunday Morning" (2001) -- terrific films, both with very little box-office appeal -- and also for "March of the Penguins," "An Inconvenient Truth" and "Man on Wire." One-time renegades Moore and Morris have come in from the cold, although arguably neither guy won for his best movie: Moore's "Bowling for Columbine" and Morris' "The Fog of War." One can definitely continue to kvetch about the omissions. I don't know whose dog Steve James ran over, but it's absolutely disgraceful that "The Interrupters," his moving and dramatic film about ex-gang members trying to stop Chicago street violence, was left out this year. As for Asif Kapadia's "Senna," I guess it wasn't groundbreaking in any way, but it's still an exciting film that put a lot of ordinary people's butts in the seats.

However, if the Academy's documentary branch wants to reach across the partisan divide into red-state America, it has the perfect candidate this year in Daniel Lindsay and T.J. Martin's "Undefeated," a "Hoop Dreams"-style story about sports and society that inspired me and made me mad in about equal portions. (I'll discuss the other nominees on another occasion, but here they are: Danfung Dennis' war-veteran saga "Hell and Back Again," Marshall Curry's "If a Tree Falls: A Story of the Earth Liberation Front," Joe Berlinger and Bruce Sinofsky's "Paradise Lost 3: Purgatory," and Wim Wenders' 3-D dance documentary, "Pina.")

"Undefeated" is a tale of the 99 percent for sure, except that the young men who play for coach Bill Courtney's Manassas High School Tigers, on the north side of Memphis, are a lot closer to the bottom 1 percent than the top. They live in a physically derelict and economically devastated neighborhood, where few households have two parents and few of those parents have full-time jobs. Before Courtney, a local businessman who lives in a luxurious suburban home, volunteered to coach the Manassas football team for no pay, they were a bedraggled program who'd gone almost 14 years without winning a single game. As he explains it, the school kept the team going by essentially renting it out as a sacrificial goat to suburban schools on a pay-for-play basis. The Manassas players would be bused out to some white neighborhood, take a whipping from some better-coached and better-organized team, and go home with a pizza and a check for a few thousand dollars. Courtney's mission at Manassas is evangelical, in several senses of the word. He wants to create a winning football team, he wants to teach these boys self-respect and encourage them to pull themselves out of their dismal circumstances, and he wants to serve as surrogate father and mentor to young men with very few constructive role models.

If Courtney doesn't officially want to serve as a spiritual guide, or spread the gospel of Jesus Christ, it's probably fair to say that in the context of Southern high school football, that stuff just comes with the territory. This is an old-school, you-are-there documentary, completely free of judgment or extraneous commentary, and the pervasive quality of religious faith in the lives of Courtney and his team -- along with the sense that team sports, and especially football, is itself a sort of spiritual quest -- is just a given. Courtney stops just short of praying to God for victory before a big game, but when Manassas goes on an unlikely winning streak during the 2009 season, he doesn't discourage the view that their comeback victories over bigger, richer and whiter schools might just be the will of the Big Guy.

I've already mentioned race more in this article than anyone does in the film, maybe because the racial dynamics of Manassas, and of Memphis and Tennessee and the United States, are so obvious to everyone involved. When Courtney tries to get his troubled defensive star, Chavis Daniels, to get in his car for a chat, he jokes, "You don't like to ride with white people, Chavis? Is that it?" That might be the only time in "Undefeated" that anyone officially notices that Courtney has a different skin color than all the players on his team, and from virtually everyone on the Manassas campus.

To be honest, the whole idea that high school football is this almost mythological test of masculine character is profoundly alien to me. Still, there's no disputing that Bill Courtney has touched and transformed his players' lives, at absolutely no tangible benefit to himself. His brand of hyper-Christian caring and tough love -- after one practice, he tells the team he must go home and pray for forgiveness for cursing so much -- is hungrily embraced by these young men who've hardly ever had anyone treat them with dignity, let alone a wealthy white man who didn't have to. Manassas' unlikely 2009 run makes for great drama, as do the heartbreaking tales of the team's three stars: Daniels, academic standout and undersized lineman Montrail "Money" Brown and O.C. Brown, a massive offensive lineman and genuine NCAA prospect.

But if O.C. and Money are getting out of north Memphis, partly through their own skill sets and partly because Courtney gave them a leg up at the right moment, what the hell is going to happen to the rest of the kids at Manassas? Should you have to be a football star -- and one with a rich, white, well-connected coach -- to have any shot of escaping from crime and poverty and a dismal, half-abandoned neighborhood? "Undefeated" is a genuine crowd-pleaser, a rousing and inspirational flowers-in-the-junkyard fable of hope and possibility in grim circumstances. But I can't help thinking that if you step back from the immensely likable Bill Courtney and his football team, the bigger picture is of a screwed-up society that can offer no hope to millions, and is throwing away entire generations of young people.

"Undefeated" opens this week in Los Angeles and New York, with wider release to follow.