Purloined, secret documents suggest the Heartland Institute could have lobbying plans, in violation of IRS rules 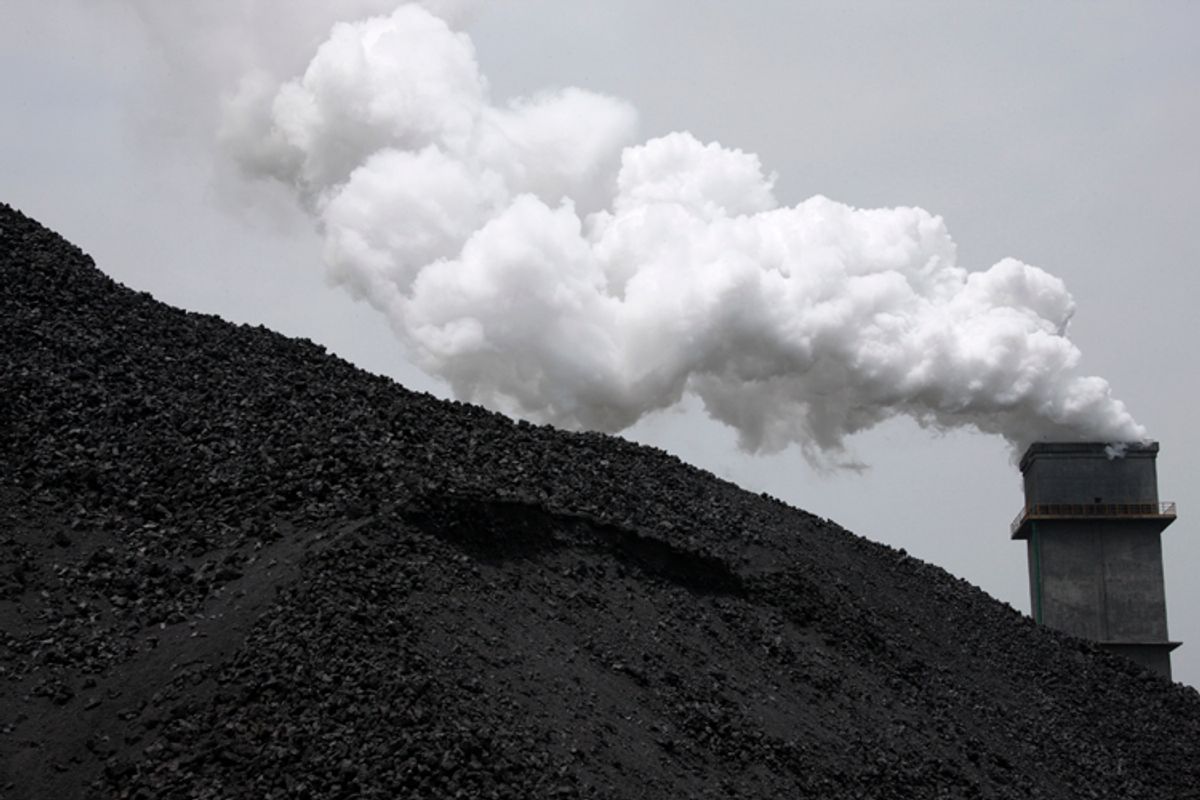 With Al Gore way down in Antarctica inspecting melting glaciers, and America’s unusually mild winter providing a respite from seasons of freakish droughts, floods, Nome-style whiteouts and the hurricane that ravaged Vermont, the issue of man-caused global warming has been out of sight and mind.

But virtually all scientists continue to believe that most indicators suggest the world as we know it is slowly ending, and that humans are to blame.  Nature – oceans, deserts, crops, animals and insects – is in the process of being transformed by rising temperatures due to the fuel we burn to stay warm or cool, and to power factories, cars and jets. In the academies, the argument now is only between experts who predict “bad” and those who predict “catastrophe.”

Some people don't want to hear it. Supporters of industries that profit from the fossil-fuel status quo routinely challenge those facts, and treat them as political talking points. This week, a dirty trick played on one of the chief industry front groups, the Heartland Institute of Chicago, a major source of “climate denialism,” as the fact-based scientists like to call it, revealed just how politicized the issue has become.

On Tuesday, an individual claiming to be a Heartland donor persuaded the group to email him or her the group's annual budget, its fundraising plan and a 2012 strategy paper, outlining the organization’s intent to insert contrarian views of climate change into the nation’s elementary schools.

The dirty email trick was reminiscent of a similar ploy in 2009, when someone hacked into emails of a British science consortium that advises the U.N. on climate change and released them publicly, revealing an argument between scientists on some of the evidence. At the time, Heartland touted the private emails as proof that scientists do not in fact agree on the causes of global warming, a development they call the “Climategate” scandal.

This is exactly the kind of thing we see people doing, and we know they have been actively promoting the fringe voices, trying to influence teaching curricula, trying to lobby legislators, trying to undermine the conclusions of bodies. But it is good to know who is actually funding them.

Heartland, which bills itself as anti-regulatory and libertarian, annually produces climate change “denier” conferences and pays expenses for elected officials to attend. For example, the budget shows that Heartland allocated $304,704 for scientists supporting its contrarian views in 2012.

One of these scientists is Fred S. Singer, a physicist and National Weather Bureau satellite center founder, who is said to receive $5,000 a month. The same day as the document leak, a science watchdog named John Mashey released a detailed investigation into Singer and his Science and Environmental Policy Project, indicating that he failed to properly fill out income forms for the foundation. Singer has previously worked with Heartland arguing that secondhand smoke is harmless. One of Heartland’s funders, according to the documents, is Phillip Morris.

Other scientists, researchers and pseudo-scientists on the Heartland payroll include a former California TV weatherman, Anthony Watts, who runs an anti-climate change science blog called WUWT (Watts Up With That). Heartland budgeted him $90,000 for a “special project."

On his blog yesterday, Watts admitted taking an unspecified sum:

Heartland simply helped me find a donor for funding a special project having to do with presenting some new NOAA surface data in a public friendly graphical form, something NOAA themselves is not doing, but should be. I approached them in the fall of 2011 asking for help, on this project not the other way around.

The Heartland budget allocates more than half a million dollars for “government relations” and another $800,000 for communications. Besides the big-budget annual climate conference, another $25,920 was budgeted for eight “Heartland Capital Events” identified as “events in state capitals for elected officials,” at $3,240 each.

As a 501(c)(3) nonprofit organization, Heartland is legally barred from using its tax-free income of $7.7 million to lobby for or against legislation. The fact that the group appears to be intending to do just that could transform the group's ongoing public relations disaster into a legal problem. Heartland’s activities are no surprise to environmentalist watchdogs, but actual proof of moneys spent on lobbying activities might affect their legal status, if the IRS bothers to investigate.

Besides trying to influence public (and lawmaker) opinion on fossil fuels and climate change, Heartland works on other overtly political projects that have nothing to do with climate change.  The group gave $612,000 for something called “Operation Angry Badger,” aimed at the nonscientific goal of supporting Wisconsin’s anti-union Gov. Scott Walker, who is targeted for recall by progressives.

Worried that liberal (and, in their view, overpaid) public schoolteachers are turning young minds green with impunity, Heartland planned to pay a coal industry consultant named David Wojick about $25,000 per quarter, to create a curriculum to counter global warming education in schools.

“Many people lament the absence of educational material suitable for K-12 students on global warming that isn’t alarmist or overtly political,” the document states. “Heartland has tried to make material available to teachers, but has had only limited success.”

Heartland is not alone in attacking the issue through the schools. Three states (Louisiana, Texas and South Dakota) have passed so-called Environmental Literacy Improvement Act bills -- written by energy industry shills -- that require schools to teach climate change “denial” along with conventional climate science. Other states are considering such measures.

“The big issue is that they are using charitable status to lobby," Schmidt asked. "They are not an educational outfit. They are doing this to influence legislators. To what extent is it appropriate for them to be filing nonprofit status?”

A strategy paper indicated that Heartland has targeted Forbes and the New York Times as outlets for its message. Forbes has "begun to allow high-profile climate scientists … to post warmist science essays that counter our own,” the documents says. "This influential audience has usually been reliably anti-climate change and it is important to keep opposing voices out."

The paper recommended cultivating more neutral voices with big audiences, "such as Revkin at DotEarth/NYTimes, who has a well-known antipathy for some of the more extreme AGW communicators."

"Mugging of a private organization"

Heartland spokesman Jim Lakely, reached by Salon on Wednesday, declined to comment on whether Heartland engages in lobbying. He insisted that at least one of the leaked documents  (the “strategy” paper) is a “fake” and therefore he wouldn’t concede the authenticity of any of the others, although he didn’t deny it either. The organization did publicly apologize to donors whose names were revealed, indicating that at least some of the information is accurate.

Was there poetic justice in an email trickster obtaining internal documents from Heartland, just as Heartland used hacked emails of climate scientists arguing over details to promote the alleged “Climategate” scandal.

There are profound differences between this online mugging of a private organization that is not receiving public funds, and what happens to organizations where taxpayer dollars and international funds are involved. There is a level of accountability that the public is entitled to and that is not remotely parallel to ambushing a private organization’s private documents. I expect [progressives and environmentalists] to make those comparisons, but we are not a public entity.

Lakely also denied that Heartland’s efforts have helped turn a scientific debate into a circus of political claims, counterclaims and dirty tricks. "What the Heartland Institute has been encouraging for a long time is a scientific discussion," he said.  "We invite people who even hate the Heartland Institute to engage in civil open and public debate about what the science says is happening to the planet."

Among the listed donors were big pharmaceutical companies and insurers (financing the Heartland’s “Choose Your Medicine” project aimed at fighting what it calls “Obamacare”). The Charles Koch Foundation kicked in $200,000 to the healthcare effort. Energy companies and trusts affiliated with them were behind financing for the climate projects.

After the documents leaked, some of the listed donors distanced themselves from Heartland. Microsoft told the New YorkTimes that its $59,908 donation was not in cash, but in software that it routinely provides nonprofits. A Glaxo Smith Kline spokeswoman confirmed the company's $50,000 donation but added, “We absolutely don’t endorse their views on the environment.”

The document leak inspired much glee among enviro-bloggers like DeSmogBlog and Think Progress Green, but NASA’s Schmidt said tainted science is a serious problem that exists beyond Heartland’s lobbying efforts.

“I don’t think Heartland is either powerful or particularly well-funded,” he said. “They do channel money to these small number of skeptics who make a living being skeptics. But those people would exist without them. The politicization of this topic has come about because people perceive there are political consequences to this problem. What is surprising is that scientists who are just doing their job get pulled up and investigated just because somebody doesn’t want to agree with their results. And that has been driven to a large part by groups like Heartland. "