Tim and Eric's comedy of repulsion

In their new movie, the cult comics push the limits of human vulnerability -- and generate laughs from nerves 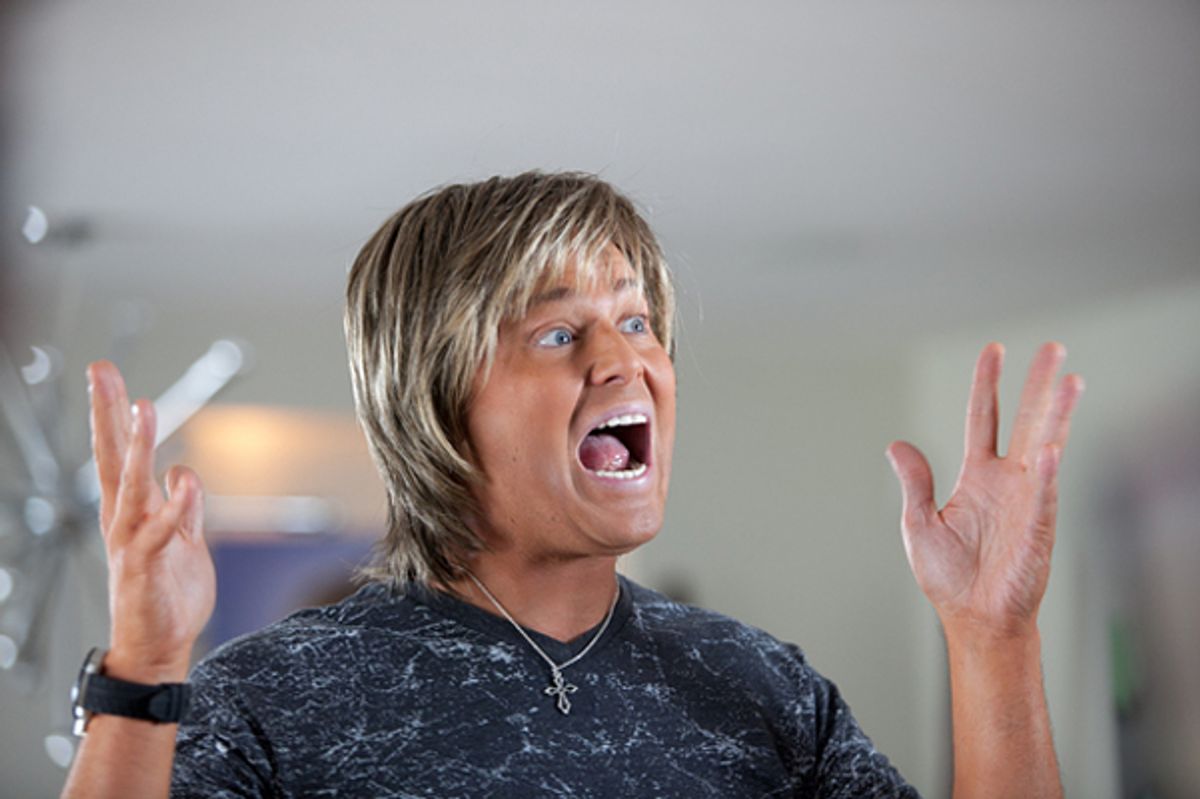 "Repulsion" is an emotional response that darts past the smug butterfly nets of intellect and rationale to expose my true and shameful feelings: Nothing turns my stomach like a stranger’s display of vulnerability. This reaction sickens me, in turn, and begins a cycle of nausea and self-loathing. I am repulsed, revulsed and repulsed again.

I say a stranger’s vulnerability and not a friend’s, because a loved one’s vulnerability is less of a risk to them, and so less of a burden to me, the witness. In the split moment that a person is vulnerable, or when we project a vulnerability onto them, we become responsible for their existence in the world. In seventh grade, the year-supreme of vulnerability, I overheard a girl in my class talking about her excitement over the year's first dance. Her mother was taking her to get her hair done, she said, and to buy her a new dress. My skin prickled with discomfort. Didn’t she know the dance wasn’t a “get your hair done” kind of big deal? On the night of the dance, everyone was in a casual dress or jeans. She showed up with an elaborate updo and a ball gown. That moment has forever seared itself in my mind. I wanted to throw up and cry.

This repulsion toward vulnerability is really a resentment at being put in charge of a person who doesn’t know how to play the game of affecting invincibility. The main purpose of this game is pretending death will never come; the smaller goal is to pretend that we are all perfectly self-sufficient. This is why so many people were outraged at Lana del Rey’s "Saturday Night Live" performance: She stopped playing the game and forced us to bear witness to her crippling fear. This is also why people abuse the elderly and disabled and animals -- their vulnerability is too obvious and provokes hostile resentment.

But here’s where it gets tricky: When we’re revolted by someone’s vulnerability, we split into two. We imagine that person’s vulnerability in the eyes of the rest of the world, and we ourselves are one of those other people, watching. We’re watching the interaction between ourselves and that person, simultaneously, from the inside and the outside. Our repulsion becomes sadness as we watch ourselves reject them -- because if they are vulnerable, then we are, too.

No one provokes this death spiral of emotion better than Tim Heidecker and Eric Wareheim, the Tim and Eric comedy team whose sketch show “Tim and Eric Awesome Show, Great Job!” aired on Adult Swim from 2007 to 2010. Their new movie, “Tim and Eric’s Billion Dollar Movie,” is available now on demand, and in theaters March 2. There's a Facebook watch party Saturday at 6 p.m.

Almost fainting or willing yourself into non-existence is a large part of the Tim and Eric viewing experience, and if you haven’t seen them before, you might have to take the grossness in doses. Start with the more easily digestible, and amazing, Paul Rudd “Celery Man” clip.

And here's "Biology for Foreign Men," on "the chubs":

Chubs aside, the show’s true comic genius lies in its cultivation of moments of sincerity toward increasingly obsolete cultural norms: ideas of success, professionalism, sexuality, masculinity, entertainment or social interaction. It’s this sincerity that causes excruciating discomfort, for witnessing someone else’s belief in something we’ve decided is a joke, is pure vulnerability.

Look at the “petite feet” sketch below. Cowboys play pool. They hear a woman’s footsteps. The woman turns out to be a man with the footfall of a woman. The cowboys get onstage and sing a song. A song about a man with the feet of a woman. This is all funny on its own, but the sketch’s main brilliance is the “actor” playing the petite-footed man and the surrounding extras. They aren’t in on the joke, not in the same way that Tim and Eric are. This is true for most of the supporting actors and extras in the majority of Tim and Eric sketches. In their "Billion Dollar Movie," a man delivers the duo new work uniforms. They dance around in their new clothes, while the man stands there ... and continues to stand there long past the time we’ve expected the scene to cut. He looks uncomfortable, and in turn, I want to throw up.

As Tim Heidecker says, “We cast some legitimate character actors, as you saw, some real funny comedians, and then some people that — we like to say — put a headshot up online and forgot about it, maybe. We dig through to the bottom of the pile and find them, then give them lots of lines.”

Just reading "bottom of the pile" makes me queasy.

These actors have either been given no direction, or purposefully incongruent direction. Their presence is awkward and forced, or often worst of all, they’re genuinely having fun, excited to participate in showbiz, not knowing that we’re laughing. It’s this not knowing, a lack of awareness of context that makes us so uncomfortable. Half of the whole is in on the joke -- and half of the whole is not. The burden this imbalance places on us is why many people can’t stomach Tim and Eric, don’t understand them, or walked out of their Sundance screening. But this is exactly the reason why Tim and Eric are brilliant.

It’s important to mess with the spiritual structure of the world -- the architecture of ideas, institutions, identities and even the structure of filmmaking. Only by doing this can the ludicrous nature of the game be revealed. Maybe one day we will overcome our repulsion toward weakness and admit our fragility on a daily basis. On that day Tim and Eric will no longer be unsettling, but until then, in a very twisted way, they’re helping us get there.