The social network site kicks up so much anxiety and embarrassment for me. But that doesn't mean I want to quit it 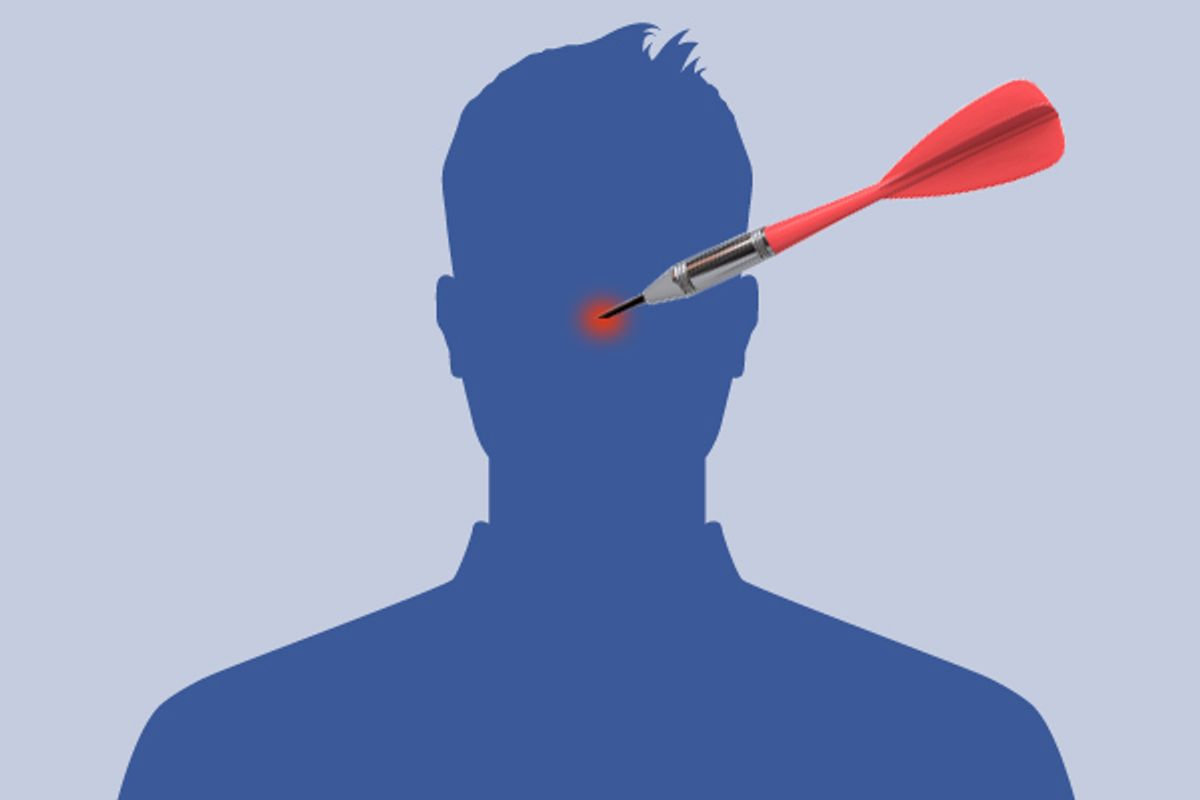 A few days ago, my friend Elizabeth posted an item to Facebook. I wanted to comment but held back, though not exactly because I had plenty of work to do. Instead I sent her a text: “Sometimes do you want to say something or post something or like something on FB, but then you think of all those unanswered emails and texts and silence yourself, so people won’t see you ‘wasting’ time when you could be responding to them?”

“It’s called Twilt, that feeling,” I answered, laughing, having coined the term on the spot.

Twilt (n): the particular brand of guilt or self-reproach that results from posting, liking or commenting on items on Facebook or Twitter while simultaneously not responding to emails, text messages, phone calls or other types of personal communication with the knowledge or anxiety that the specific message senders will notice your public offerings and question your lack of private ones. Twilt, while related, is not the same as the guilt that results from general Internet-specific procrastination such as browsing blogs or online shopping, which, though it may result in its own brand of self-disgust, generally has no public shame component.

Adam Zagajewski, in his essay “The Shabby and Sublime,” says that the poetry of recent years is “marked by a disproportion … between powerful expressions of the inner life and the ceaseless chatter of self-satisfied craftsmen.” The same could be said for Facebook updates, our contemporary confessional. I have eaten the plums in the refrigerator, and they were yummy. Facebook is bad for me because I not only embarrass myself but I keenly feel the embarrassment of others whose lack of discretion, as I perceive it, I quietly judge and am embarrassed by all the same.

When someone starts a conversation with me on Facebook, in public, I’m mortified. There’s a message function for that! I have email and a cellphone. Let me respond when I can, away from the watch of hundreds. Sometimes I disable my Wall so people can’t write things there, until someone points it out and I feel guilty that I’ve done this so I change it back. I don’t like to talk on the phone in public and when a friend speaks too loudly in a cafe I am nervous that someone will overhear our conversation. At home I don’t like the sensation of my husband overhearing me order pizza, let alone having more sensitive conversations with friends. I have never been one to kiss and tell, and I like to keep my private life private. Why I have a Facebook account at all still perplexes me. I like the idea of seeing what’s going on, but I don’t want to always be a part of it. I don’t want to not be a part of it either. I want to swoop in and swoop out. But Facebook doesn’t allow for inconsistency without amplifying it, a constant record of our obsessions and our contradictions to the point of caricature.

The conversations between couples embarrass me the most, whether they’re sentimental or self-referential. It’s not that you live with that person and somehow don’t need electronic communication -- I often text my husband across the table at a bar to make a snarky comment, or sometimes I send ridiculous things to the online printer in his office just to be impish. But it’s done in private, between us. That’s the point. It’s something about the relationship having a public facade so contrived and self-aware that makes my eyes water with shame. We all have facades and personas, of course, that are not Internet confined. Game faces. Once, at a reading, a poet thanked his wife so gushingly that I whispered to my friend, “That guy is totally having an affair.” I didn’t know a thing about him. But it turns out, I was right. Maybe the wife requested the shout-out, but if I were his wife I would have smiled at the crowd and taken flight. Up, up and away.

Do you remember "This American Life’s" 2001 episode about Superpowers, which poses the question: If you could have a superpower, would you choose Flight or Invisibility? My first reaction was and remains, flight. To fly! I’m petite and have spent a lifetime trying to fight invisibility, being intellectually overlooked, or feeling insignificant (this is not simply a result of my size but an entire slew of issues that would benefit from Lacanian psychoanalysis, which if I had I’d have to talk about in my status updates). I still have dreams where I’m flying, frequent dreams, and when I wake up I feel inexplicably happy. When I fly in my dreams, I don’t sputter or start or anxiously hover. I soar, I glide, and it’s fluid, like a manta ray moving through water. When I fly in my dreams I am all grace. My desire for flight would get me places faster, and in style.

But maybe my desire for flight is a sort of conditional invisibility; the idea of flight not only as the act of flying but the act of fleeing. I want to be part of the scene but to float somehow above it, to engage in the action but then be able to gracefully exit. I want to swoop on in and then glide away. But I want to be seen, for sure, and present. I just don’t want to have to stay, and I certainly don’t want anyone to comment on it.

It is also, of course, part of being a writer, to be part of a scene but also removed. Writing is about observation, but if I observe and immediately state then I’ve lost it, released it. The essay allows an expression of doubt but the Facebook update or conversation has a sort of self-satisfied glibness to it. It doesn’t invite dialogue but somehow challenges it. There is also the lack of control. It could go anywhere. Someone could say something too revealing or racist or just plain idiotic, and there it is, linked to your name. It is not a place for the anxious, Facebook.

And there is the difference of stance. An essay is an attempt at dialogue but a status update is a solicitation; the first is a meaningful hesitation or an assertive pronouncement, a languorous dip in a warm sea or a fast-paced race in a pool. But the essay swims all the same. A Facebook update is a haphazard nose dive into a near-empty watering hole. What if I break my neck? Will someone find me if my head is bleeding? If I post and no one comments, do I exist?

The comparison between the two forms needn’t be made; we know the difference, yet it might explain my relative comfort, even ease, with the personal essay and my fear of any public sort of dialogue. Do I want to be invisible or do I want to fly? Although the personal is intimate there is also the artifice of distance. When I fly in my dreams I can see myself flying while being aware of my place on the ground. Philip Lopate argues that a good essayist must see oneself from the ceiling, must turn oneself into a character. He is not advocating a “self-absorbed navel-gazing” but instead “a release from narcissism,” an ability to be able to “see yourself in the round.”

I admit I am often self-amused by my status updates (what else are they for?), but I am rarely satisfied with them. In the rare case I am amused with myself when writing anything, that to me is a sure sign that it’s going to need a very careful edit, or that it’s garbage.

What I love best about that episode of "This American Life" is the moving analysis at the end, immediately after several of the show's guests comment on what it means to want invisibility or flight. John Hodgman reflects:

Flight and invisibility touch a nerve. Actually, they touch two different nerves, speak to very different primal desires and unconscious fears … In the end, it's not a question of what kind of person flies and what kind of person fades. We all do both. ... At the heart of this decision, the question I really don't want to face, is this. Who do you want to be, the person you hope to be, or the person you fear you actually are?

Am I becoming someone on Facebook or am I trying to escape her? I’m happy my partner is not on Facebook because I am spared that public embarrassment, of people wishing us happy anniversary or the pressure to comment, or not comment, on his witticisms or offerings: J. just made fabulous butternut squash ravioli! From scratch! Natalie likes this. And then he would like my liking, and another friend would find it cute, and like it too, and no one would know that we spent the last hour fighting because I overloaded the dryer and almost burned down the house.

I wouldn’t mind if he joined Facebook, though, because he is the face man of our relationship and it would take some of the completely imagined but hugely felt pressure off me. (“Could you please like so-and-so’s photos of her daughter’s dance recital?”) If we had a band, he’d be the lead singer and I’d be the bassist, hiding behind my hair. (No, not the drummer! No one sees the drummer!) The bassist can look up and make eye contact with the crowd for a moment and the crowd will go wild. They don’t expect it but they hope for it all the same. The face man: He has to be on all the time. It’s his job to be on.

Do you remember the scene in "Sex in the City" where Carrie, upon receiving an email, ducks underneath her desk and shrieks, Oh my god, can he see me? A decade later it seems charming, like a text message from our grandmother. Yet the anxiety remains. Now, I suffer from what is surely a new psychological disorder: a DSM-IV classifiable paranoia that all my personal conversations are somehow being broadcast on Twitter. Is there a word for that?

Natalie Bakopoulos's first novel, "The Green Shore," will be published by Simon & Schuster in June 2012. Her work has appeared in Tin House, Ninth Letter, Granta Online, and The O. Henry Prize Stories 2010, and she is a contributing editor for the online journal Fiction Writers Review.