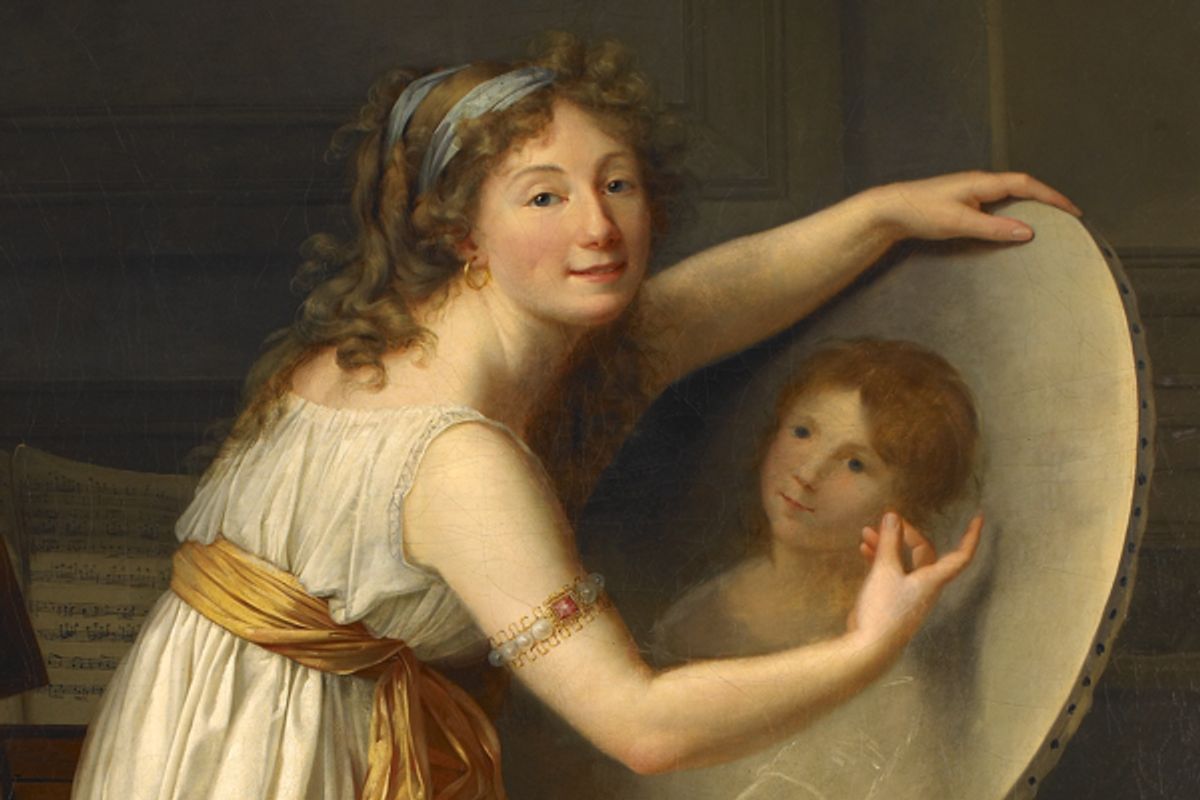 The latter days of the ancien regime, the fiery chaos of revolution and the dawn of the 19th century were witnessed and recorded by legendary French artists working in a variety of media. A new show at the National Museum of Women in the Arts in Washington, D.C., explores the particular contribution of female artists over the course of this enormously eventful period in European history.

The works on show run the gamut from portraits to still lifes and (rarer) history paintings; the majority of them have never before been exhibited in this country.

Over the phone, curator Jordana Pomeroy spoke with me about the obstacles these female artists faced, and their strategies for coping -- even thriving -- in a time of profound social and political change.

This show spans a highly turbulent time in French history. Can you talk a little about what changed over the course of this period with regard to women's place in the art world?

Well, lots of things changed. Marie Antoinette was particularly supportive of women artists, although the French monarchy had always been supportive of the arts in general. She had a large number of women in her court, and the economic climate was such that there was more money. People were feeling flush; Paris was the center of the art world, and there was generally more opportunity. There had always been women artists, but more opportunities for patronage and exhibiting arose.

This is the period of the Enlightenment, and perhaps that's most important of all. The encyclopédistes started really giving serious consideration to the position and role of women in society; that's where you start to see a real change in the social fabric -- because women are in fact accorded roles, by men. There's a kind of analysis of how society should function that hadn't existed before.

And then, of course, you have a lot of change -- change in government, in particular. The overthrowing of the monarchy obviously had a serious impact on French society. A figure like Joan of Arc, from centuries before, is being looked at as this great savior of the nation. She becomes a great female role model.

Obviously the art changes over time, but in general, how different is the subject matter that women dealt with from what men would have painted? Was it unusual for a woman to paint a portrait of a man, for instance?

No, that's not at all unusual. In fact, I think -- I haven't gone through the exhibition looking for this, but I think it's perhaps even 50/50 in the show. It could be even more men.

Men were likely patrons. A lot of the sitters in the paintings are of what I call the "artistic class" -- the same social and professional class as the painters. So in that particular sense, it was egalitarian; there was a lot of sharing of ideas and collaboration. We have a picture of a very famous violin-maker, and a picture of a very famous diplomat (painted, in fact, by his companion). Elisabeth Vigée-Lebrun painted a tremendous number of very important men. I think when it came to portraiture, they were pretty gender-blind.

You write in the introduction to the exhibition catalog that the fact that women painted so many self-portraits contributed to a newer, clearer conception of the "woman artist." Is this the first time that this collective identity came across so strongly?

You know, we had a show of 16th- and 17th-century Italian women painters [at the museum] -- and I think that went on equally then. This is not the very first time, at all.

For instance, we have a self-portrait of the artist Marie Geneviève Bouliar as Aspasia [slide 3]. It's really quite a terrific painting; I think it speaks volumes about the show itself. It could be the emblem of the exhibition. It shows the painter, half nude, as Pericles' consort. As [the companion of] a great Athenian leader, Aspasia was accused of either being very clever and rather manipulative, or incredibly brilliant, depending on which way you looked at things. That's the way people have always looked at women: If you're too clever, you're manipulative and aggressive. There are great layers in this particular painting; you have the painter putting herself in that position because that's how she was looked at by society.

What would you say was the greatest obstacle women painters had to deal with in this period? Lack of training? Or the failure to be accepted in established academies?

There was a confluence of obstacles, but I think the real obstacle was being a woman, and I mean that in every possible way. Right there and then, you were born with obstacles in your path. And yet I don't think that these people, who came mostly from artistic families, sat around and bemoaned their fate as women, either. They were living their lives, which meant working in the studios of their fathers or their brothers-in-law, and actually gaining a career that way -- starting to sell pictures. They had their own strategies, that's for sure. And their main strategy was to go through the men who surrounded them for patronage opportunities.

On the other hand, you have somebody like Elisabeth Vigée-Lebrun, who pulls herself up by her own bootstraps very early on, and takes full credit for that. She makes connections -- to the royalty [in particular]. There's a way of seducing the system that many women recognized it was important to do.

The one thing they didn't really have is access to the École des Beaux-Arts. If you were trained at the École des Beaux-Arts, that was like your seal of approval. If you weren't, that didn't mean you came out with a worse education -- because you would apprentice yourself to a great painter, say David. But you didn't have that old boys' network. And you still have that today; there's a similarity for women today who don't have access to old boys' networks.

I'd like to play devil's advocate for a second, and ask whether you think the separation between men's and women's art in this period is artificial. Why not show these paintings in the context of a larger exhibition about male and female artists working at the time? Or does the format you've chosen simply serve to celebrate a tradition that hasn't really received the attention it deserves?

That's a very good question. This particular exhibition falls into two arenas that are important to our museum. One is plain old recovery: Here are some artists you've never heard of, and yet they form part of a very, very rich network -- a thickly woven fabric, let's say, of artistic life in Paris at a particular time. Perhaps most people have heard of Vigée-Lebrun, but there were many, many other artists out there working, and they're not recognized. When you see them as a group, it's really rather sobering -- or enlightening, anyway.

A more interesting point is that so many of these artists were really quite successful, did create these sorts of networks, and managed to build very lucrative careers for themselves. How they got there is a matter of finding other ways to gain their education, finding people to work with, finding patrons, becoming well-known and sort of establishing a reputation for themselves. That's the narrative that I draw out by putting these works in certain categories and certain scenes. And while for some exhibitions we've included male artists for context, I think the context really here is political. It's not what the men were doing -- it's really more what politics was doing, how society was changing and how women made their way in this particular society at this particular time.

There is one specific area I should mention: history painting. Women did not engage in much history painting, ever. But I do have a few in this exhibition, as well as a few landscape paintings. History painting was really considered the top rung of the academic ladder, because it involved painting the figure, and it involved "serious" work -- you know, this is about history.

I should point out that part of the show is going to travel to Sweden, so it'll have an afterlife. The Nationalmuseum in Stockholm is adding a component on 18th-century Swedish painters (women and men), because there was a lot of cultural interchange between the two countries in the 18th century. I think that's really exciting. The show will have a slight metamorphosis, but that will just add to our understanding of this very rich period in the history of art, and how women artists played a large, large part in the evolution of art -- and in some senses, I suppose, in politics itself -- by becoming more visible.

"Royalists to Romantics: Women Artists from the Louvre, Versailles, and Other French National Collections" will be on display at the National Museum of Women in the Arts in Washington, D.C., from Feb. 24 through July 29, 2012.