To achieve economic justice in the 21st century, we need to fight for democracy in the workplace 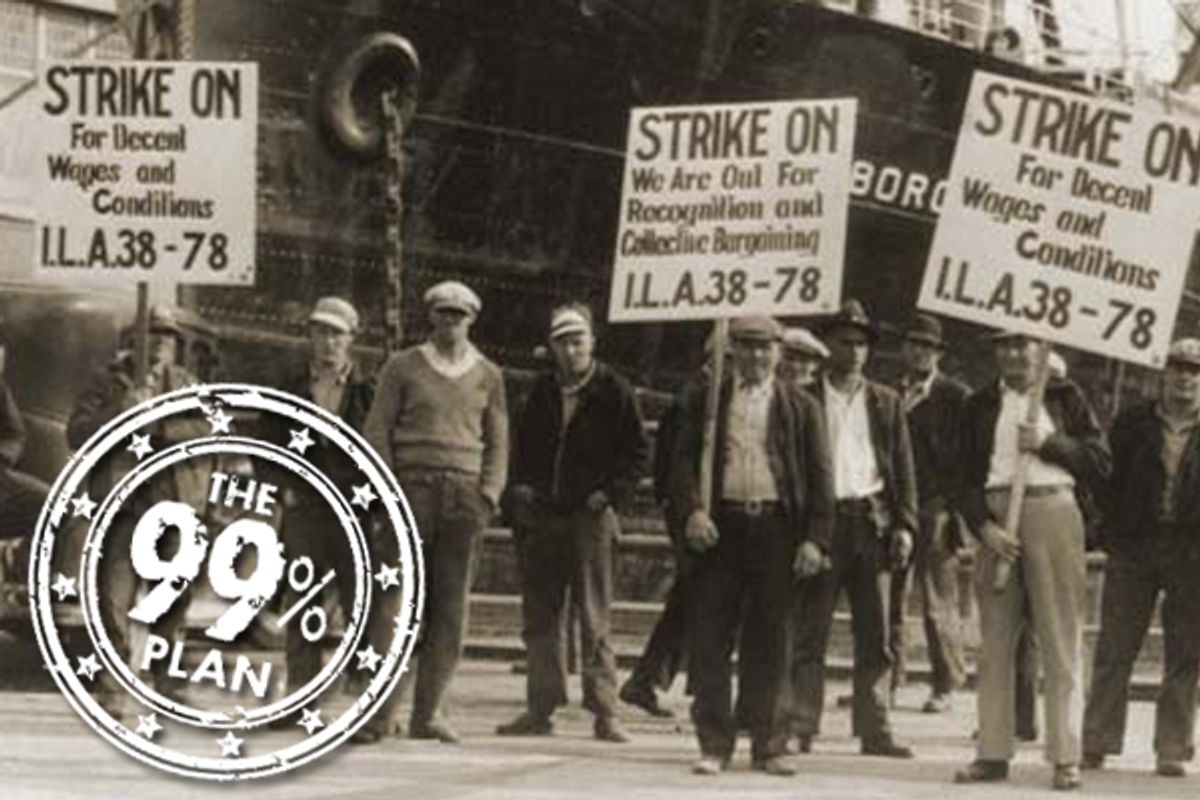 The 99 Percent Plan is a joint Roosevelt Institute-Salon series that explores how progressives can shape a new vision for the economy. This is the third essay in the series.

The fate of the labor movement is the fate of American democracy. Without a strong countervailing force like organized labor, corporations and wealthy elites advancing their own interests are able to exert undue influence over the political system, as we’ve seen in every major policy debate of recent years.

Yet the American labor movement is in crisis and is the weakest it’s been in 100 years. That truism has been a progressive mantra since the Clinton administration. However, union density has continued to decline from roughly 16 percent in 1995 to 11.8 percent of all workers and just 6.9 percent of workers in the private sector. Unionized workers in the public sector now make up the majority of the labor movement for the first time in history, which is precisely why — a la Wisconsin and 14 other states — they have been targeted by the right for all out destruction.

The urgency is striking. Instead of being fundamentally discredited, the oligarchs and plutocrats who crashed our economy are raking in record profits and acting even more aggressively to bury the American labor movement once and for all. Over the last year, several labor leaders have told me that they believe unions have only about five more years left if they don’t figure out some kind of breakthrough strategy.

The complete collapse of unions would have devastating consequences. The labor movement has played a crucial role in advancing economic justice in the workplace and in politics. Union membership raises median weekly earnings and reduces race- and gender-based income gaps, and union workers are much more likely to receive health care and pension benefits than workers who are not members of a labor union. The decline of organized labor is directly linked to the rise in economic inequality over the last 40 years and the onset of a “Second Gilded Age.” The decline in union density coupled with the decline in the real value of the minimum wage explains one-third of the dramatic growth in wage inequality since the early 1970s.

Over the past 30 years, American employers have become even more aggressive at violating their workers’ rights to organize under a toothless and outdated labor law regime. Contrary to the intent of the 1935 National Labor Relations Act, which made it national policy to encourage and promote collective bargaining, the NLRA now provides incentives for employers to break the law routinely and ignore any compulsion to negotiate collective agreements. When there is little outrage for the daily violations of workers’ liberty (employers fire workers illegally in 1 in 3 union campaigns for attempting to exercise freedom of association), our democracy is in peril.

As worker power has eroded in the workplace, the labor movement’s political clout has also declined. Measured by both members and money, unions are  still the most influential and resourceful left-wing constituency in American politics. Organized labor also remains the most powerful core of the national Democratic Party by several measures, including campaign contributions, grassroots mobilization efforts, lobbying and setting the party’s legislative agenda. Indeed, the labor movement spent a record amount of money to help get a Democrat elected to the White House in 2008.

With a labor-friendly White House and a Democratic Congress, organized labor began strategizing about how and when to push for its No. 1 priority, the Employee Free Choice Act (EFCA). Labor law reform would not only help the flagging movement survive but also offer an indirect solution to our growing problems of economic inequality and the catastrophic Great Recession. By leveling the playing field between workers and employers, higher union density decreases wage inequality in the American labor market while increasing purchasing power of consumers.

But the move to pass EFCA failed, revealing just how weak organized labor has become. Now, with no hope for labor law reform in sight, is the time to rethink the role of the labor movement in the 21st century. Progressives need a strong and vibrant labor movement that focuses not just on workers’ rights, but can also act as a democratizing force advancing social justice and expanding worker, citizen and resident power in the workplace and in their communities.

The labor movement is the critical anchor and enabler of democracy grounded on a notion of freedom. Most people have an intuitive understanding of what democracy means: rule by the people (as opposed to rule by the few or an elite). Yet, as Corey Robin so eloquently points out in his book on fear, Americans give up their individual freedom and democratic voice every single day they walk into work. The workplace is an authoritarian dictatorship, and we accept this as legitimate.

Now is the time to challenge that feudal relationship. We need to call into question the assumption that Americans believe democracy stops at the workplace door. If we would not stand for a despot to rule over us with impunity, why do we let the boss do so every day of the workweek? Any progressive advance needs a strong labor movement to achieve a fully free and democratic workplace and society. This vision of freedom and democracy manifests in two domains: the workplace and the southern region of the country.

First, labor’s role must be made much more central at the workplace and in the economy more broadly. Labor can, and should, be a governing co-partner with business and government in the economy. What labor brings to the table is a vision of growth with equity. And there are already examples of this kind of union and worker organizational influence in the economy at the regional level. The Los Angeles Alliance for a New Economy (LAANE) and Working Partnerships USA, both in California, have shown how labor can become a governing partner in economic decision-making at the regional level.

Another aspect of centralizing labor’s role in the economy and advancing workplace democracy is to expand workers’ voice and power at the bargaining table.  A 21st century vision of the American labor movement is one that destroys the divide between labor and community that has long governed the politics and practices of unions. What the emergence of new forms of worker organizations have taught us is that workers are also residents in communities, while residents are also workers, and there are organizational models available that take all workers’ identities into account.

While labor law constricts the scope of issues that unions can negotiate at the workplace, it doesn’t prevent worker organizations from bargaining in the political arena for affordable housing, equitable development, local, regional and national economic policy, criminal justice, or the wide range of issues that affect poor and working class people. Stephen Lerner, among others, has outlined what a wider scope of collective bargaining might look like. Imagine, for instance, that the United Auto Workers could negotiate over the environmental standards of the cars they produce instead of just wages and benefits. Such a vision requires a far-reaching campaign to redefine the scope of collective bargaining and workers’ voices at work. This is a 10- or 20-year effort to be sure, but one that will be crucial to any future the labor movement has in the U.S.

Directly related to expanding labor’s role in the economy and expanding the scope of collective bargaining is advancing freedom in the workplace. In short: democracy, over autocracy, at work. This would go beyond the softer slogan of the AFL-CIO’s “voice at work.” This is an admittedly long-term project. But several concrete demands arise out of the broad notion of a workplace democracy. For instance, the Employee Free Choice Act would have allowed workers a modicum of political liberty at the workplace; it aimed to restore workers’ rights to freedom of association. But a deeper and even more controversial demand proposes an end to management prerogative over all workplace decisions. Workplace democracy means truly giving workers a “voice” at work. Whether through work committees or required seats for employee representatives on the company’s board of directors, a deeper vision of workplace democracy enables workers’ voices to have a real impact.

The second domain for a 21st century labor movement is geographic: finally democratizing the South through the building of a Southern labor movement. After the CIO’s Operation Dixie failed to organize Southern workers in the late 1940s, with a few exceptions mostly in the public sector, organized labor gave up on the South. We’ve been suffering the consequences ever since. The Southern, Walmart model of low-wage labor markets is being imported to the North. We only have to look at the attack on public sector workers in Wisconsin and Michigan and the recent passage of Right-to-Work legislation in Indiana to understand that Northern governors and the Republican Party are trying to turn their states into Yankee versions of Southern Right-to-Work (for less) states.

Instead of retreating to a defensive posture, organized labor should launch an ambitious and bold campaign to organize the South. A Southern labor movement would galvanize workers in the region who, contrary to popular belief, would like to become dues-paying union members. Given the dramatic demographic changes occurring in the South involving increased migrations of people of color who tend to be the most pro-union and pro-worker organization (see the Coalition of Immokalee Workers’ recent victory over Trader Joe’s), the opportunity for organizing and building a Southern labor movement is greater today than even 60 years ago under Operation Dixie. This effort would not only transform the low-wage economic model of the South, it would prevent the race to the bottom from North to South, and most important, it would transform the politics of the region and fundamentally the country.

What grounds this vision of a 21st century labor movement is the core idea of extending what Americans claim to cherish in politics and civil society to the workplace: democracy, liberty and freedom. The consolidation of income, wealth and political power by the 1 percent over the last several decades is directly related to the decline of workers’ voice and power. Rebuilding a truly countervailing (and democratic) power, as the labor movement did in the 1930s and 1940s, will require a bold and convincing vision of workplace democracy and freedom. Workers and their organizations have historically played this anchoring role for progressive politics throughout American history. Now is the time to reclaim this historic charge for the 21st century.

Dorian T. Warren is a Fellow at the Roosevelt Institute. He is also a frequent contributor on MSNBC. You can follow him on Twitter @dorianwarren.