Inside the sexual counterrevolution

For the last 40 years, the right's sexual paranoia has warped our politics. An expert explains how to change that 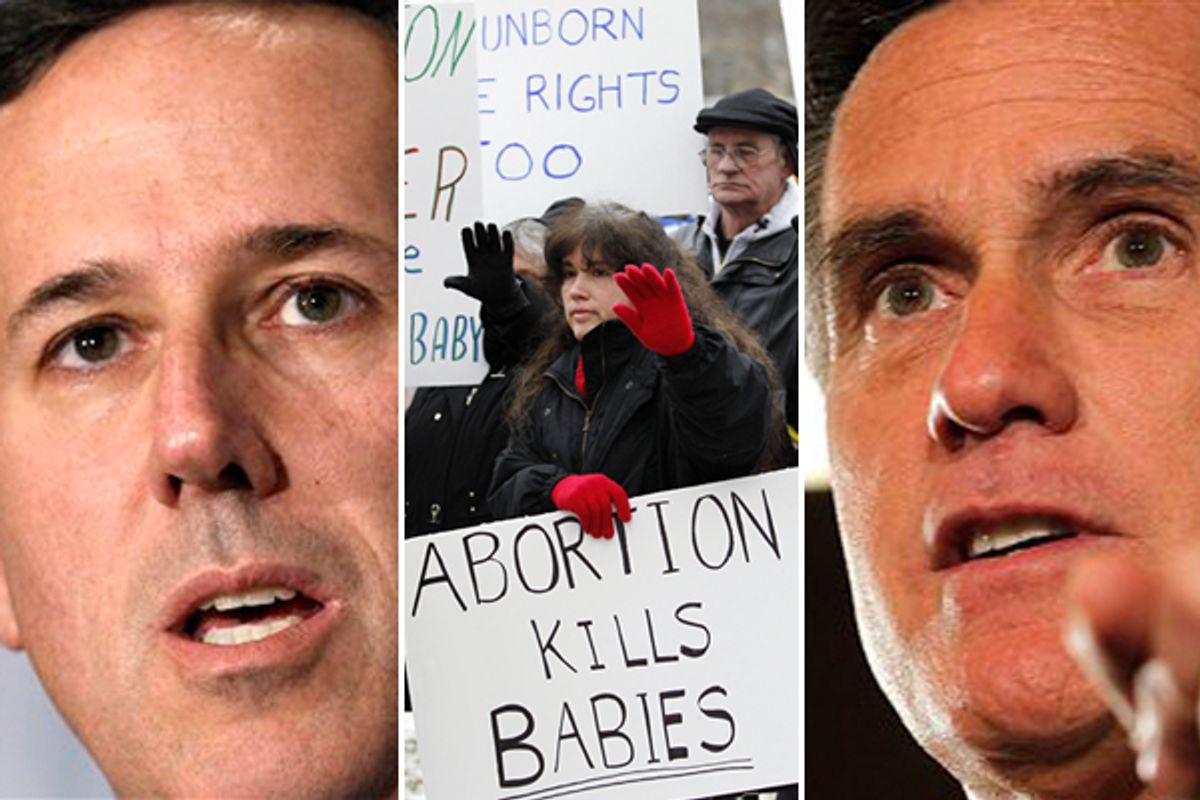 These days, watching politicians debate sex legislation feels a lot like watching footage from decades ago. In the last few months alone, Rick Santorum has called contraception “dangerous,” Mississippi’s Initiative 26 nearly granted “personhood” to fertilized eggs and thereby potentially made birth control illegal, and the anti-gay rights movement once again garnered headlines around the country. While politicians argue endlessly over what Americans should be doing in their bedrooms, statistics show that middle America agrees on legal abortion, gay civil unions and access to birth control. So why are politicians debating issues that have long been settled, while more pressing topics like unemployment, renewable energy and overseas wars remain on the back burner?

Historian Nancy L. Cohen, author of the new book, “Delirium: How the Sexual Counterrevolution is Polarizing America,” explains how America’s conflicted attitudes toward the sexual revolution have fueled America’s political wars for the past 40 years, causing a deep divide that has remade the cultural landscape. Cohen describes how a minority of America’s population is making antiquated decisions about legislation that infringes dangerously on the rights of America’s majority.

Salon spoke with Cohen — who has held positions at UCLA and Binghamton University and is the author, previously, of “The Reconstruction of American Liberalism, 1865-1914” — over the phone about the sexual counterrevolution, how America has become polarized over sex and family values and whether there’s hope for our future.

You coined the term sexual counterrevolution to describe the political reaction against the changes ushered in by the sexual revolution. Why do you think we need a term like this to understand our political history?

I think what’s been missing from the debate about why American politics are so polarized and really, frankly, so insane these days is this recognition that there has been a concerted, organized movement to turn back the changes brought about by the sexual revolution: feminism and gay rights. And it seemed to be logical to coin a term to talk about this broad shadow movement that’s been effecting our politics for 40 years.

Why is the sexual counterrevolution so key to solving our political and economic problems?

The voting base that has fueled the rise of the right cared most about these issues -- of sex and gender and family and abortion and gay marriage. Their conservatism on those issues initially moved them into the Republican Party and has basically thrown anyone out of the Republican Party that disagrees with them. For other reasons, these people who I call sexual fundamentalists support small government except in your bedroom because they feel that liberals and secular humanists and Democrats have imposed these cultural values on the country that they don’t support. So they want to go back to a time when religious morality dictated the law on family and sex in America. They want to go back to a time when gay sex was illegal, abortion was illegal, and now they’re going after birth control.

I thought one of the most interesting parts of your book was the history of the Democratic shift toward the middle and the GOP change from a progressive party into what we currently have. You wrote that sexual counterrevolution is not a bipartisan affair, but do you think it’s as simple as Democrats for sex and Republicans against it?

No, I don’t. There was a conservative reaction in the Democratic Party in the '70s -- against feminism, and gay rights, and broad changes in the culture. That conservative reaction died out fairly quickly in the party in part because the people advocating it were quite old. When they passed away and the party adopted more progressive positions, it didn’t have that conservative wing anymore. But the Democrats have tended to overreact to this movement on the right and feel that being progressive on these cultural issues loses elections for them. I think generally Democrats have a kind of live-and-let-live attitude towards people’s family life and their sex life, but Democrats worry that they’ll lose elections, so they move to the right on these social issues. That’s exactly what we saw with the Obama administration retreating on its decision on birth control coverage.

All the evidence shows that this is just wrong, that Democrats win elections for standing up for progressive social values. The problem is, that Democrats really do believe, for example, that they’re going to lose white Catholics if they take a principled stand. And so you have these voices in the Democratic Party warning them that they’ll lose the election if they stand firm on this rule, and those voices trump the majority.

What makes sex such a central issue to Americans in particular? Other countries have managed to liberalize their attitudes successfully, what do you think makes America different, than say, England?

America is by far the most religious of the advanced nations. I think there's a long history in America of puritanicalism, of excessive religiosity. The opposition to modern sexual mores, by this point, is really entirely concentrated among the most religiously orthodox people in the country and among the religions that take a particularly traditionalist view of sex: That it only belongs in heterosexual marriage, that sex outside of marriage is a sin, that homosexual sex is a sin, that even for someone like Santorum, sex that doesn't lead to children is wrong.

What does the media’s emphasis on sex have to do with America’s sex obsession?

We have this kind of schizophrenic culture where sex is kind of all over the place, but sex remains something that’s difficult to talk about honestly and something that’s shameful for this small minority of the country.  I think the media, in terms of understanding how the sex issues play in politics, misses the point. Most of the media said that the debates over the government shutdown were about funding for Planned Parenthood’s abortion services, when in fact it was about Family Planning Services. The media allows the right to frame the debate in a way that obscures what motivations are behind it.

Teen sex is a hot topic in the U.S. Why is it such a flashpoint?

Generally, even though half of all 16-year-olds are sexually active, Americans still have discomfort over teenagers having sex. The right has been very effective at making our general debates about birth control, emergency contraceptive and abortion about teenagers -- and not just teenagers, but very young teenagers. If you listen to newscasters on FOX news you’ll hear them talking about 13- and 14-year-olds having sex. Well, there are about 2 percent of 13-year-olds having sex.

How do the successes of the gay marriage movement fit into the sexual counterrevolution?

[Sexual fundamentalists] dislike gays as much as they dislike unmarried women having sex, so it is one of the core issues. As with the abortion and birth control debate, they find the wedge where they’re going to attract voters beyond their tiny 15 to 20 percent of core supporters.

Which Republican presidential candidate hopeful do you see doing that (finding the wedge to attract voters) the most in this election?

There’s really no difference between them. The rhetoric is different. Gingrich is the most bombastic. Santorum is the most pompous. Romney is the one most willing to have it both ways, so that when centrist voters pay attention they don’t realize how extreme his positions are.

How do you see Obama using sexuality as a tool for votes?

I think Obama largely wants to stay away from it. On the other hand, he’s a little bit too reluctant to engage the opposition in a principled way. I have to say I find it astonishing that after the Prop. 8 ruling, Obama’s spokesman said that Obama is still evolving on gay marriage. Now, no one really believes that he thinks there's a legal case to be made on outlawing gay marriage, but he’s still under the sway of the idea that he’ll lose the election if he takes a principled stand. The surveys of public opinion suggest that he would benefit from taking a principled stand in support of gay marriage.

Will we see a presidential candidate in the near future who will be pro-choice and in support of gay marriage rights and be able to win the election?

I think we’re already at a place where if a candidate did say that, he or she would win the election. The sexual fundamentalists, as I said, make up less than 20 percent of the population, and they’re outnumbered 2 or 3 to 1 in the electorate. The so-called middle of America is progressive on these issues -- 54 percent of Americans still favor legal abortion. Only 19 percent want it outlawed in all cases like the Republican candidates promise this year. Whether we’ll see it has a lot to do with whether there is high engagement in the election and whether the people who believe in this stay involved. I think it’s also going to involve educating Democratic politicians that they’ve got it all wrong. That they can win elections on this.

Is there room for a third party, an extremely leftist liberal group, the opposite of the Tea Party? Is that something Americans would embrace?

Institutionally, there is not room in America for a third party, but I think there is room for a movement on the progressive end of the spectrum that would actually attract lots of people in the so-called middle to pressure the Democratic Party to take a principled stand on protecting civil rights and equal rights and human rights.

What do you see as the long-term outcome of the sexual counterrevolution? Do you think there’s hope?

I do think there’s hope. And I think there’s a way to hold it at bay, and in some ways defeat it if everyone stays informed about what’s going on and stays active, and votes in every election. In 2010, 40 million Americans who voted in 2008 stayed home, and that’s how the Tea Party elected these Republicans who want to outlaw birth control, abortion and gay marriage. If all those people who had voted in 2008 had voted in 2010, we would have never had this far-right Republican majority in Congress. The answer is to vote and stay informed, and we can put an end to this.

Megan L. Wood is an editorial fellow at Salon.