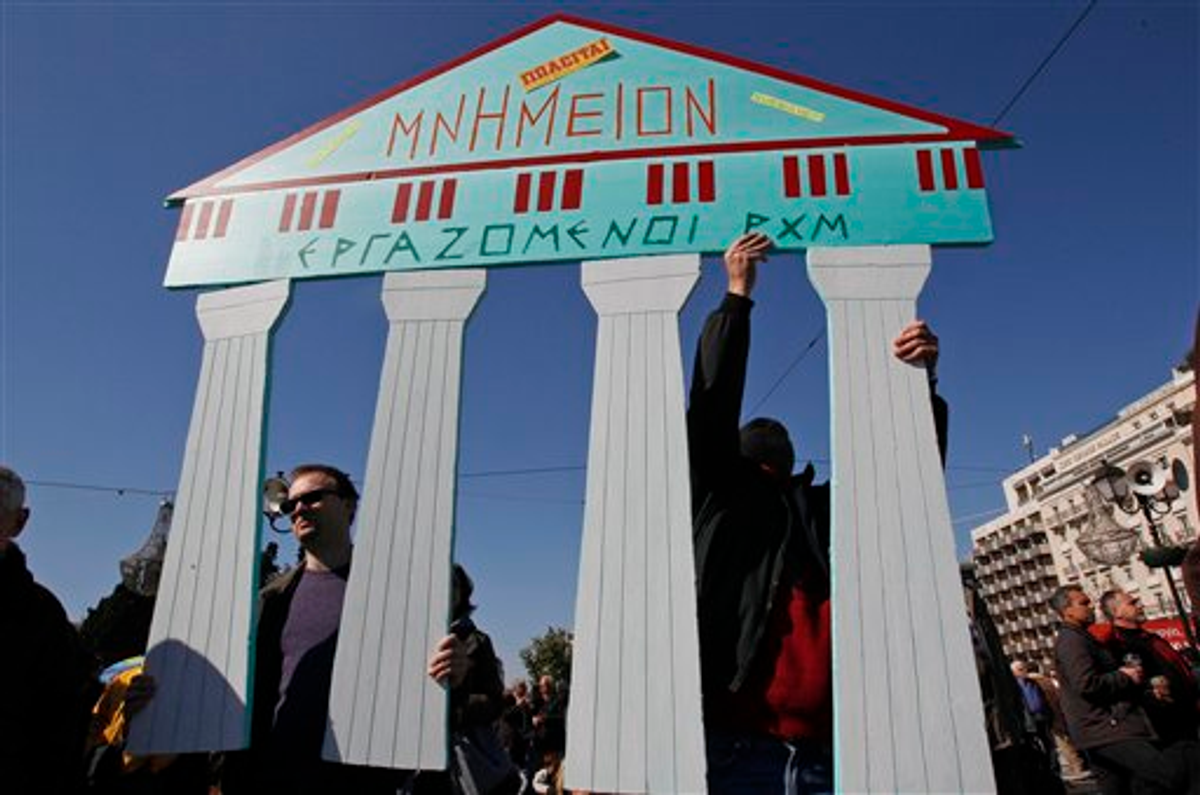 Employees of the Byzantine and Christianity museum hold a cardboard replica of ancient ruins which reads: ''Monument for sale'' during a peaceful protest outside the Greek Parliament in Athens, Sunday, Feb. 19, 2012 (AP Photo/Thanassis Stavrakis)
--

ROME — The European Union has finally agreed on its latest 130 billion euro bailout plan that should save Greece from going bust next month.

Now all it has to do is help the country pull out of a five-year recession, get the one-in-five unemployed Greeks back to work and make sure that Portugal, Ireland, Spain and Italy don't end up sharing a similar fate.

Tuesday's agreement among euro zone finance ministers came after another tense bout of all-night negotiations at the end of months of bickering between Brussels, Berlin and Athens on whether the Greek government could be trusted to make good on austerity pledges given in return for the rescue funding.

"In the past two years and again tonight, I've learnt that marathon is indeed a Greek word,” said the EU's Economic Affairs Commissioner Olli Rehn. “But in the end we came to an agreement."

The deal is certainly a major achievement in the battle to get both Greece and the whole of the euro zone out of their economic mess. But nobody has any illusions that the euro zone is anywhere near the finishing line of its long-distance race to get out of the economic hole.

The nuts and bolts of the deal mean that the EU and International Monetary Fund will hand over 130 billion euro in loans so Greece can meet debt repayments due in March.

Greece's private creditors have been squeezed into agreeing to take a loss of 53.5 percent on their Greek bonds — which is expected to translate to debt relief of a further 100 billion euros. Any profits that the European Central Bank or other EU nations make from Greek bonds will be channelled back to Athens.

"We have reached a far-reaching agreement ... to secure Greece's future in the euro area," said Jean-Claude Juncker, Luxembourg's prime minister who chaired the 14-hour overnight talks in Brussels.

In return, Greece has agreed to another round of wage, pension and job cuts which are designed to see the country's debt drop from the current level of 160 percent of economic output to 120.5 percent by 2020.

Athens will also agree to an unprecedented level of oversight of its economy, including permanent EU monitors in Athens and the creation of a special account that will make sure the international funds are used for debt repayments — until the country changes its constitution to make repayment a priority.

By heading off the immediate threat of a Greek default, the EU has provided a short-term solution to the most pressing threat to the euro zone.

However, Tuesday's agreement does little to address the underlying problem of Greece's shrinking economy and lack of competitiveness.

Some estimates see another 10 years of recession on top of the five Greece has already suffered as it struggles to rein in its debt. An internal EU report leaked to journalists in Brussels on Monday painted a gloomy picture that warned more bailouts may be needed unless government reforms start to produce growth.

It's by no means clear whether the Greek people will be ready to accept the prospect of seemingly endless austerity. The anger expressed in the regular riots on the streets of Athens will be tested in elections in April, where parties on the far left and right who oppose the austerity-for-bailout deals are expected to do well.

Meanwhile, Spain, Italy and, in particular, Portugal will be hoping the respite agreed for Greece will boost confidence in the wider euro zone. They will also be fearing that with Greece off the hook for a while, sceptical markets will be looking for a new outlet for their default fears.