Justice Kagan sides with the Right on Miranda 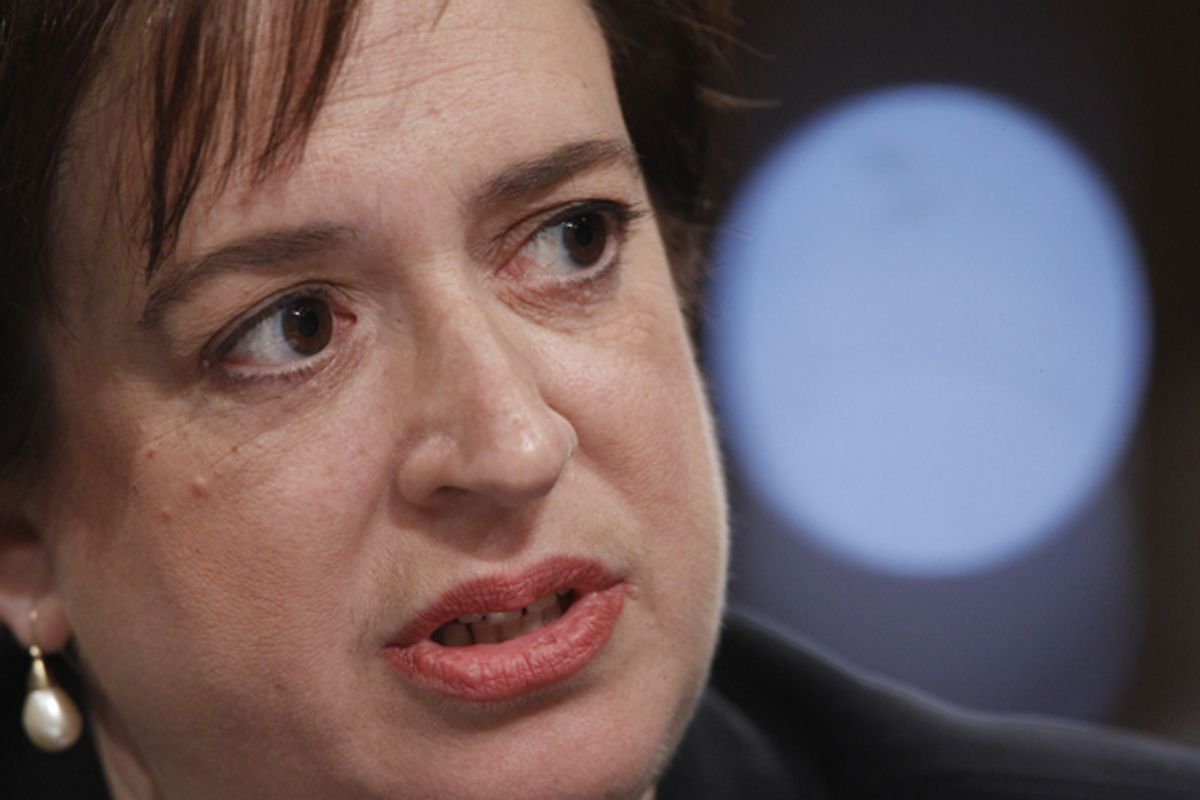 Although I praised and vigorously defended President Obama's choice of Sonia Sotomayor to replace Justice David Souter on the Supreme Court, I argued vehemently against his appointment of Elena Kagan to replace Justice John Paul Stevens. My argument against Kagan was three-fold: (1) even if (as was likely) she more often than not votes with the relative liberals on the Court, the fact that she was replacing the most liberal justice meant that the net effect of her appointment would likely be that she would move the Court to the Right (as I wrote at the time: "by 'the Right,' I mean: closer to the Bush/Cheney vision of Government and the Thomas/Scalia approach to executive power and law"); (2) far too little was known about her judicial philosophy to risk her appointment, particularly when there were so many outstanding judges available who had a long and clear record of outstanding jurisprudence; and most importantly, (3) to the extent anything could be discerned about her judicial and legal views, she evinced a strong belief in broad executive authority and government/police power, among the most important areas the Supreme Court would adjudicate over the next decade or so (at the time, I summarized my argument against the Kagan nomination on Democracy Now, where a transcript can be read here, as well as on Rachel Maddow's show and ABC's Sunday This Week program).

Thus far, it's been far too early to know what type of Justice she will be -- in part because she recused herself from so many important cases (because she had worked on them as Obama's Solicitor General) and because the wheels of justice grind especially slowly on the Supreme Court level. To the extent there has been any evidence, it has been mixed: she refused to join with Justices Ginsburg and Sotomayor in voting to review both (1) a death sentence imposed on a woman whose lawyers argued "is borderline mentally retarded, with the intellectual ability of about a 13-year-old,” and (2) dismissal of a case brought by two Colorado residents alleging that their First Amendment free speech rights were violated when they were forcibly removed from a Bush campaign event due to anti-war t-shirts they were wearing. Those were somewhat disturbing decisions (though of limited value in knowing her judicial approach); on the other hand, she authored an important and powerful dissent enforcing the First Amendment bar against state establishment of a  religion.

Today, although the overall picture is still incomplete, we have probably the clearest -- and definitely the most troubling -- sign yet. In Howes, Warden v. Field, released today, the U.S. Supreme Court reversed a decision of the Sixth Circuit Court of Appeals, which (along with the federal district court hearing the case) had held that a prisoner's Constitutional rights had been violated when prison officials interrogated him for five to seven hours without advising him of his Miranda rights. The prisoner confessed during his lengthy interrogation; the State then used the confession at trial; and he was ultimately convicted and sentenced to 10 to 15 years in prison. He then filed for a writ of habeas corpus in federal court, arguing that he was in "custody" during the protracted interrogation and the failure to advise him of his Miranda rights meant the State was barred from using the confession to convict him (Miranda warnings are required for any "custodial" questioning: when the person being interrogated is "held" for interrogation). Both the district court and Sixth Circuit agreed that he was in "custody" during the interrogation, and thus granted habeas corpus due to the failure of prison officials to advise him of his right to remain silent, his right to an attorney, etc.

The Supreme Court today reversed the Sixth Circuit's grant of habeas corpus. All nine of the justices agreed that the legal conclusion of the Sixth Circuit -- that "isolation from the general prison population, combined with questioning about conduct occurring outside the prison, makes any such interrogation custodial per se" -- was not "clearly established Federal law" (a prerequisite to granting habeas corpus relief for a state prisoner). But on the question of whether the prisoner was entitled to be read his Miranda rights under the circumstances here -- i.e., he did not consent to being removed from his cell for interrogation and was "questioned by two armed deputies long into the night and early morning," often with the door closed -- the Supreme Court split by a 6-3 vote. Six justices (the 5 right-wing justices plus Kagan) signed onto Justice Alito's opinion ruling that the prisoner was not in "custody for purposes of Miranda," while the 3 relative liberals on the Court (Ginsburg, Sotomayor and Breyer) all joined Justice Ginsburg's dissenting opinion, which concluded (citations omitted):

As the Court acknowledges, Fields did not invite or consent to the interview. He was removed from his cell in the evening, taken to a conference room in the sheriff ’s quarters, and questioned by two armed deputies long into the night and early morning. He was not told at the outset that he had the right to decline to speak with the deputies. Shut in with the armed officers, Fields felt “trapped.” Although told he could return to his cell if he did not want to cooperate, Fields believed the deputies “would not have allowed [him] to leave the room." And with good reason. More than once, "he told the officers . . . he did not want to speak with them anymore" . . . .

Was Fields "held for interrogation"? See Miranda, 384 U. S., at 471. Brought to, and left alone with, the gun-bearing deputies, he surely was in my judgment. . . . For the reasons stated, I would hold that the "incommunicado interrogation [of Fields] in a police-dominated atmosphere," without informing him of his rights, dishonored the Fifth Amendment privilege Miranda was designed to safeguard.

I don't want to overstate the importance of this ruling: it's not the most significant Supreme Court decision ever and it's not dispositive on the question of whether Kagan will turn out to be a good replacement for Stevens; that still remains to be seen. But it's also far from unimportant. As the lawyer Bmaz at Marcy Wheeler's blog observes today, "the decision is a significant further erosion of the critical Constitutional protections embodied in Miranda." That's because it "specifically holds that police are not automatically required to tell prisoners of their legal right to remain silent and have an attorney present when being questioned in prison about another crime."

But beyond the specifics of this case, one's views on Miranda have long been a key determinant of where one falls on the jurisprudential spectrum. Miranda rights have long been a prime bugaboo of the authoritarian Right's complaints about supposedly excessive protections for criminal defendants (Justices Scalia and Thomas, in a 2000 case, actually argued that Miranda should be overruled). Conversely, the recognition of that right was one of the crown jewels of the Warren Court, and its stalwart protection in robust form has been a litmus test for whether one is devoted to Constitutional safeguards to ensure a fair criminal justice system (President Obama has invoked Terrorism to justify the erosion of Miranda). To watch Elena Kagan side with Justices Scalia, Thomas, Alito, Roberts and Kennedy and against Ginsburg, Sotomayor and Breyer on such a central and long-standing dispute -- the scope of Miranda -- does not bode well.

Notably, the last significant Supreme Court case on Miranda came in the 2010 case of Berghuis, Warden v. Thompkins. There, the conservative faction also prevailed in significantly limiting the scope of Miranda protections. Except there, the vote was 5-4, not 6-3. That's because Justice Stevens joined with Ginsburg, Breyer and Sotomayor in defense of robust Miranda protections; this time, the vote was 6-3 because Stevens' replacement -- Justice Kagan -- joined with the conservative majority. That's what many of us who were concerned about Kagan's nomination meant when we argued that, even if she often votes with the liberal wing, there is a high risk that, as the replacement for Justice Stevens, she will move an already right-wing court further to the Right, particularly in areas of executive authority and state police power.