Instead of fixing roads, the House leadership proposes a bonanza for the oil industry. Many Republicans are balking 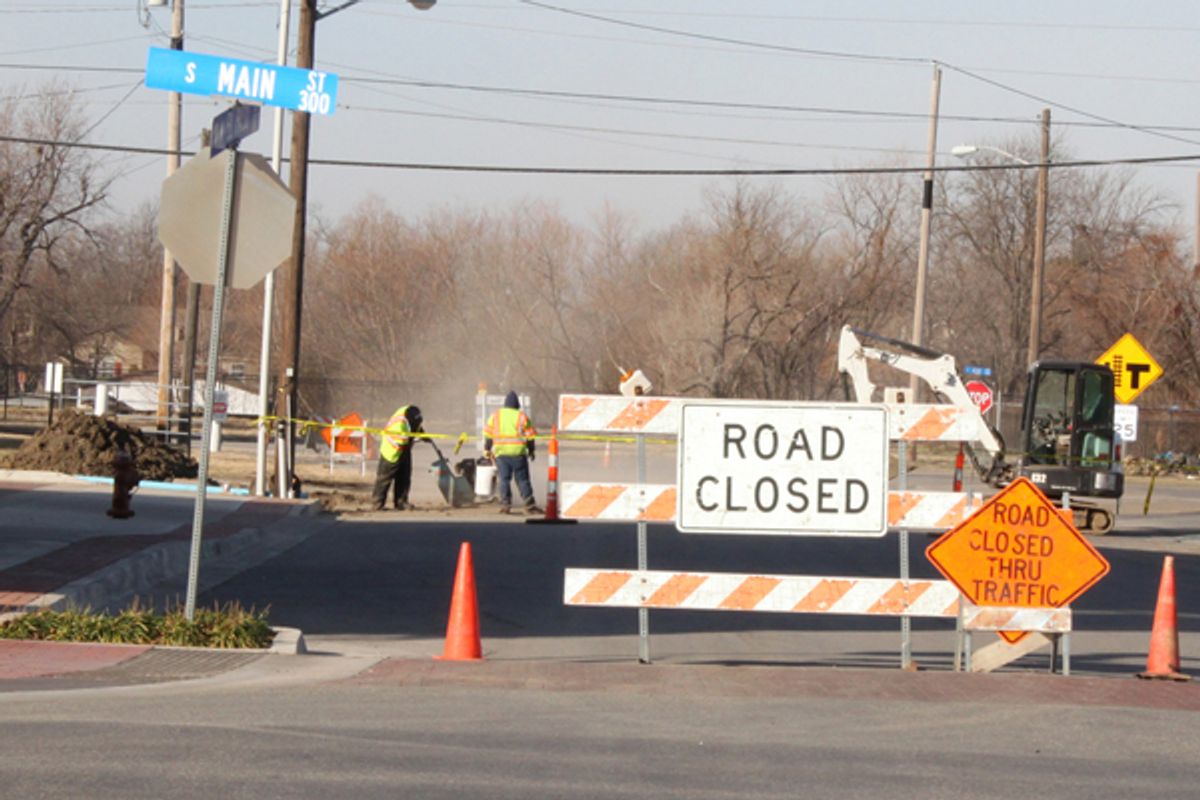 There are over 4 million miles of road in the United States, 600,000 bridges, and more than 100,000 miles of rail. To prevent the lot of it from crumbling beneath us, Congress passes transportation authorization bills to fund the repair of the nation’s withering infrastructure. Given their unmistakable utility — everyone tends to agree that sagging bridges need fixing — they’re typically highly bipartisan affairs that come and go without anyone really noticing. Not this time.

When the GOP announced its transportation bill last month, Capitol HIll  jaws dropped. The $260 billion five-year plan would, for the first time, tie transit funding to a bevy of new oil and gas projects. One would open up the long-preserved Arctic National Wildlife Refugee. Another would offer up millions of acres of public lands to shale drilling. Still another would open nearly all the nation’s coastline, including the recently oil-soaked Gulf of Mexico, and mandate a host of new offshore drilling operations.

You’ve almost got to admire the sheer audacity of House Republicans: This was supposed to be a transportation bill, not a bonanza for the oil industry.

The actual transit elements are equally aggressive. Pedestrian and bike programs would be shut down; Safe Routes to School, which does exactly what it sounds like, would be eliminated. And to free up money for highway expansion and bridge repair (which the bulk of the $260 billion is allotted for), the bill would sever the funding mechanism for public transit. For 30 years, one-fifth of the cash flow from the federal gas tax has gone to transit, and this bill would boot it out of the Highway Trust Fund altogether, forcing it to compete for financing with all other programs.

This is a nightmare, I thought, perusing the proposals for the first time. Transit policy experts concurred. They balked at the radical move to link crucial funding to highly speculative oil revenues. They puzzled over measures that rolled back environmental protections, and lambasted the drive to gut funding for anything that wasn’t a highway. U.S. Secretary ofTransportation Ray LaHood, a Republican, told Politico that it’s “the worst transportation bill I’ve ever seen during 35 years of public service.”

And there’s essentially one big fat reason the bill is so bad.

“The Republican House leadership hijacked the transportation bill for political purposes,” says Deron Lovaas, director of transportation policy for the Natural Resources Defense Council. “When the speaker announced it, I hate to say it, my first thought was: OK, we’re now in election season, and the House leadership is not interested in policy — they want to play politics.”

Despite the fuzzy logic guiding the bill, and the even fuzzier math it’s built upon — the Congressional Budget Office found that relying on drilling revenues would leave a $78 billion gap in the budget — it may indeed have made for a shrewd political gambit.

Gasoline prices are rising, and whenever that happens, support for domestic drilling grows. And so Speaker John Boehner’s blog booms: “Republicans have a plan to address high gas prices – and create more than a million new private-sector jobs in the process: the American Energy & Infrastructure Jobs Act.”

Perhaps the House leadership hoped that by pegging drilling measures to an otherwise mundane transit bill, they could force the Democrats’ backs against the wall. (And maybe generous contributions from oil and gas interests helped motivate their strategy: According to OpenSecrets.org, Boehner received $210,000 in contributions from the industry between 2011-2012. Other influential architects of the plan, like Rep. David Camp, the chairman of the Ways and Means Committee, also raked in over $100,000. House Republicans have altogether received a total of $10 million. And indeed, pairing drilling and transit might’ve been canny; it’d be unpopular to oppose. But then the GOP did something it’s proven quite adept at: It went over the top.

Not satisfied with the oily glut already on hand, the GOP tacked on a provision that would approve the controversial Keystone XL tar sands pipeline, the permit for which was denied by the Obama administration. Obviously, the 1,700-mile pipeline, which environmentalists have vehemently opposed, has nothing to do with transportation. Tossing Keystone into the fray made it clearer than ever that any intent to approach this legislation in a bipartisan manner was out the window. Hundreds more amendments followed, and the House leadership was overwhelmed. The bill so heavily favored highways and oil production that it couldn’t be taken seriously as a transit plan.

Bill McKibben, the author and environmentalist leading the fight against the Keystone XL, wrote me the following in an email:

Transportation is clearly one of the key issues of the new century, but instead of thinking about, say, trains, subways, buses, high-mileage vehicles, and the stuff that other cutting edge nations are doing they're headed straight back about three decades ... Clearly they understand one thing and one thing only, which is doing the bidding of the fossil fuel industry. So we get ... ANWR? Keystone? This is supposed to be serious?

A burgeoning number of Republicans think not. Especially after the grim CBO forecast, fiscal conservatives are backing away. Influential right-wing groups like the Club for Growth, the Competitive Enterprise Institute and Taxpayers for Common Sense all oppose the plan. The Club for Growth went so far as to put out a Key Vote Alert imploring conservatives to vote against the bill, calling it “a remarkably bloated and inefficient piece of legislation.”

The Ohio Republican Steven LaTourette vocally condemned it, noting that it’s “pissing off all the people that ride bicycles and like to walk.” LaTourette, frustrated by the partisan posturing, said, “This has to be a bill that everybody signs off on that actually puts people back to work. It can’t be an ideological punching bag, or else it’s dead.” He lamented that "Infrastructure used to be something that was widely popular among both parties, and for some reason over the last few Congresses, they’ve become highly polarized."

Meanwhile, conservation-minded Republicans like Charlie Bass, R-N.H., are against the reckless drilling blitz.

"Opening ANWR to drilling as a means to pay for the transportation bill is neither reasonable nor realistic," he told the Associated  Press. He sent a letter to the GOP leadership, signed by five other Republican House members, asking them to reconsider the Arctic drilling provision. And Rep. Robert Dold, R-Ill., penned a passionate Op-Ed warning that pushing to drill in ANWR is "a mistake on many fronts."

The fact that the bill jeopardizes funding for public transportation is scaring off urban Republicans in New York and Chicago. Newly elected Bob Turner, R-N.Y., whose district stretches between Brooklyn and Queens, told Streetsblog, “I have concerns about how the funds will eventually be allocated. We cannot underestimate the importance of providing efficient, safe, mass transit, roads, bridges and tunnels to the people who live and commute in New York City.” He added that “I will not support any bill that does not allow New York City to sufficiently meet those needs.”

In other words, it’s too brazen in its gift-giving to the oil industry, too hard on mass transit, and too fiscally irresponsible. Even for Republicans.

The Senate, meanwhile, passed a sensible version with overwhelming bipartisan support—and, amazingly, two old-school Republicans even floated the idea of pegging the gas tax to inflation to help account for the persistent shortfalls. See, though today’s politicians would rather burn the Constitution than suggest raising gas taxes, it’s traditionally how we’ve paid for highway upkeep. Ronald Reagan, patron saint of the GOP, actually instituted the highest-ever bump in gas taxes in the nation’s history: five cents per gallon in 1986. But it was last raised in 1993, and the current tax simply isn’t adequate to cover for inflation and higher material and labor costs.

When it became clear that there weren’t going to be enough GOP votes to pass the whole package, the House leadership split the bill up into three pieces, falling back on a rarely used procedural motion that would tie them all together once (and if) they all passed. Lovaas likens the bill to the Titanic, which also split into three parts ... before sinking.

The first of those chunks, the one stuffed with drilling projects, and that approves the Keystone XL, passed the House along a party-line vote last week. The White House promptly threatened to veto the whole transit bill if those drilling provisions remain, and it has an abnormally strong case for doing so. But it might not need to. Boehner delayed the vote on the transportation chunk, largely because a) he still has no idea how to pay for it, and b) it has become so unpopular he might lack the votes to pass it. As such, the GOP may have sacrificed the nation’s shot at a coherent transportation plan, getting only political embarrassment in return.

Like the FAA debacle and the debt ceiling showdown before it, the entire transit bill blowout showcases the opportunism of the Tea Party House, its preference for playing politics over governing, its opposition to even the most pragmatic tax increases of the sort Ronald Reagan approved, and, ultimately, its willingness to put partisan posturing ahead of acting in the public interest. The transportation bill is the epitome of everything that’s wrong with modern American governance.