An L.A. Times investigation breaks down the Academy's membership -- and helps explain this year's dismal campaign 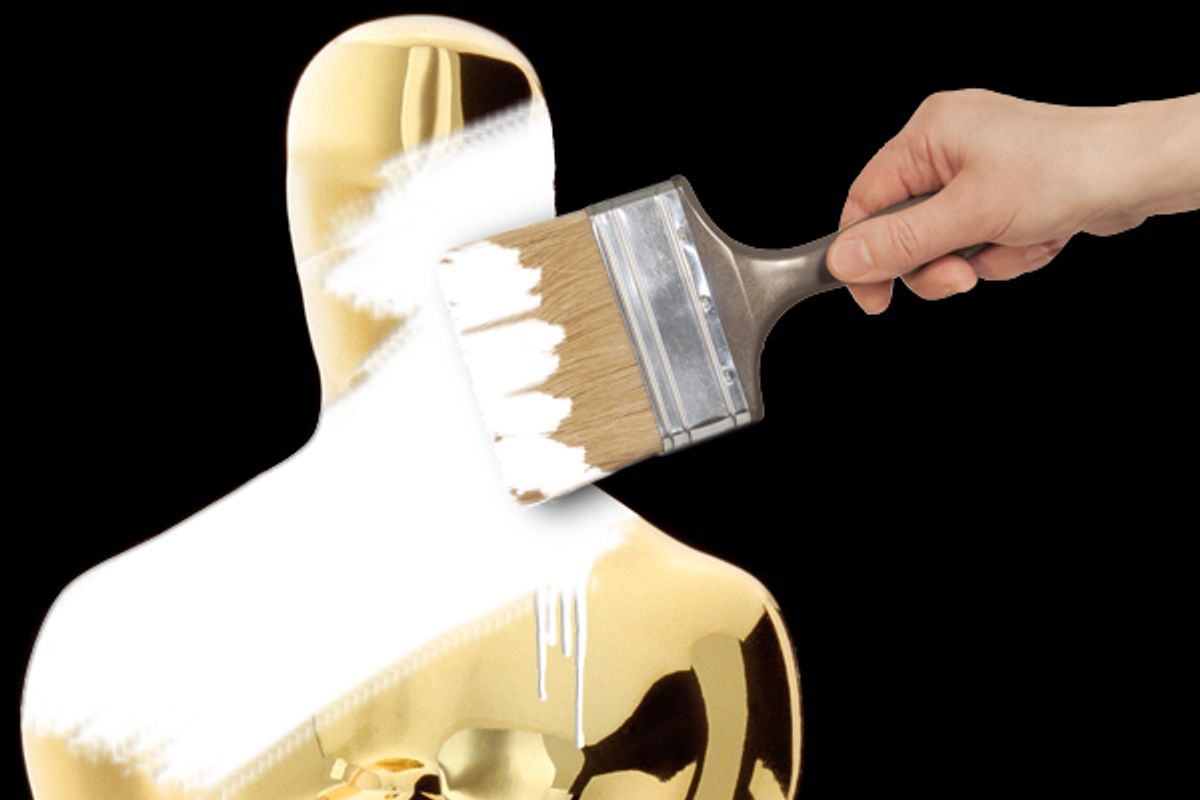 On one hand, the evidence dredged up by an extensive Los Angeles Times investigation into the membership of the Academy of Motion Picture Arts and Sciences is damning: The Oscars are being decided by 5,765 voting members (itself a smaller number than usually reported) who are 94 percent white. The membership is also 77 percent male and 86 percent over the age of 50. At the risk of stating the obvious, this is drastically unrepresentative of the United States population as a whole, which is about 36 percent non-white and 51 percent female. The median age of all Americans is 36.8 years, meaning half the population is younger than that and half older.

Now, it's also true that my reaction to all this diligent legwork by a team of at least seven Times reporters can be summarized with a colloquial phrase that begins with "No" and ends with "Sherlock." No one who has paid attention to the Oscars or the Academy -- or the American film industry at large -- harbors any illusions about who's running the show, or believes that Oscar voters have much in common with Americans or moviegoers at large. Indeed, the borderline-cruel caricature of a typical Oscar voter, often bandied about in private by journalists and publicists, is of a 70-something retired actor, certainly white and probably Jewish, who wears sky-blue slacks and white patent leather shoes and lives in Brentwood or Beverly Hills. That seems to be almost exactly what the Times investigation has revealed. If anything, I found the median age of Academy members to be surprisingly young, at 62, and the male membership surprisingly low, even at 77 percent. It's only half facetious to say that those numbers reflect years of outreach and affirmative action.

It's worth noting, by the way, that the Times pointedly did not inquire into the religious or ethnic affiliations of the Academy's white members. I can't deny being curious about the question of how Jewish the Academy is these days, and you might be able to construct a non-offensive argument for why that's relevant information. But it's information that ugly people would use for ugly reasons, and you can't blame the reporters and editors involved for not jabbing a stick into that particular hornets' nest. (Internet comment threads on this topic are likely to be bad enough without raising the subject directly.) For the record, I suspect anti-Semitic conspiracy theorists might be a little disappointed. Of course it's true that Hollywood retains some of its traditional identity as an industry founded by Jewish immigrants at a time when other business ventures were closed to them. But I'm guessing that Jewish membership in the Academy has declined a fair bit, in relative terms.

As the Times report goes on to explain, you can't accuse the Academy of failing to represent its own industry, which overwhelmingly remains a white boys' club in almost every area (except public relations, long a realm of female power in Hollywood). Many areas of the mainstream film business, including cinematography, special effects work and the executive suites, still have very few women and almost no people of color. Crunching the numbers provided by San Diego State professor Martha Lauzen and the movie industry's guilds, the Times concluded that the Academy represents women with rough accuracy among producers, directors and screenwriters, the key creative positions behind the camera. Of course this provides no answer to the larger question: Two years after Kathryn Bigelow's big Oscar triumph with "The Hurt Locker," why were only 5 percent of the top 250 box-office films in 2011 made by women? (Reportedly, 17 percent of screenwriters for Hollywood pictures were women, and about 25 percent of producers.)

As Steve Pond, the level-headed Oscar reporter at The Wrap, puts it, "In other words, the Academy, which is supposed to represent the best of the movie industry, is an accurate reflection of that industry in many ways." That's entirely true, but Pond is essentially shrugging off a larger social and cultural issue that speaks to the long-term relevance of the Oscars, or rather the lack thereof. I think we all owe a debt to the L.A. Times, however obvious the results of their work may appear, for thrusting this question front and center: How much do the creaky, crusty demographics of the Academy have to do with the fact that people don't really care about the Oscars anymore?

I realize that I'm begging the question here on a number of levels (and for once I'm using that phrase correctly). We have nearly reached the end of an awards season more tedious, more predictable and more drawn-out than any in recent memory, and in that context it's tough to evaluate the history or the overall viability of the whole enterprise. Millions will tune in on Sunday night to see the fabulous gowns, tearful speeches and unfortunate production decisions, of course. But hardly anyone who isn't directly involved this year feels a passionate rooting interest. (I mean, do you?) We can predict the winners in almost every major category, with the possible exception of best actress (although I think Viola Davis has pulled into the lead.) The nominated pictures are almost all tepid and noncontroversial, neither huge popular hits nor memorable cinematic breakthroughs. (The one exception to this might be Terrence Malick's "The Tree of Life," which won't win anything significant.)

In the middle of last week, about 10 days out from Oscar night, I clicked over to a major entertainment-news site to see what scurrilous and delightful tidbits they might have to offer. Among 35 or so stories on their front page, exactly two had anything to do with the Oscars: One was about an after-party that Jimmy Kimmel and Oprah Winfrey would reportedly attend (well, OK then!) and the other was about Kodak pulling its name off the Hollywood Boulevard theater where the ceremony is held. A couple of TV talk-show hosts, and the slow death of the historic American company that once made all the film movies were shot on (in the long-ago days when movies were shot on film). I think that about sums it up.

As I've suggested in a couple of earlier articles, I think the Academy has gradually painted itself into a cultural corner, with the Oscars increasingly devoted to middlebrow, mid-budget "Oscar-y" films that are neither mass-market hits nor indie-flavored critic's darlings. As one reader commented in response to my recent piece on the apparent Oscar failure of "The Descendants," what the Academy means by "best picture" is unclear. "Is it one we should admire? Is it one whose actors and directors we should applaud? Is it one people can't stop talking about and actually want to see again?"

What the Los Angeles Times has given us is a quantifiable, demographic answer to those questions. The Academy Awards emanate from a closed universe of movie industry insiders, who are overwhelmingly rich white guys over age 50 (in the real world, one of the demographic groups least likely to go see movies in the theater). Inescapably, the awards reflect the tastes, inclinations and worldview of that audience, which goes a long way toward explaining all the portrayals of depressed middle-aged men among this year's nominees (and the otherwise inexplicable best-picture nomination of "Extremely Loud & Incredibly Close").

As recently as the turn of the century, when best-picture winners included major pop spectacles like "Titanic" and "Gladiator," the Academy's voters could serve as a plausible stand-in for a pretty big slice of the adult moviegoing audience. But as the entertainment universe has grown ever more niche-oriented and "narrowcasted," and Hollywood's global harvest of billions has increasingly come to rely on franchise movies aimed at teenagers, Oscar-friendly pictures have become their own middle-aged genre. As Steve Pond notes, the results aren't always as disappointing as they are this year: "No Country for Old Men," "The Hurt Locker" and "The Departed" are (at least arguably) exemplary new-school Oscar pictures. But there's also no denying that they appeal most strongly to white men of a certain age.

One response is to say "so what," as some people do in the Times piece. The Academy is a private membership organization, which is devoted to burnishing the image of the film industry and has never claimed to represent the public at large. It can give out awards however it wants, and people aren't required to watch. Another might be to institute radical reforms, as suggested by 2001 best-actor winner and longtime member Denzel Washington: "If the country is 12 percent black, make the Academy 12 percent black. If the nation is 15 percent Hispanic, make the Academy 15 percent Hispanic." It's safe to say that Academy president Tom Sherak and CEO Dawn Hudson are going to steer well clear of both those positions, like Odysseus navigating between Scylla and Charybdis. They'll make mumbled noises about diversity, do little or nothing in terms of concrete change, and hope to God that next year's Oscar race has more sizzle.