The real problem with honoring Whitney

The uproar over Christie\'s order to fly the flags at half-staff was about race and gender, not drug addiction 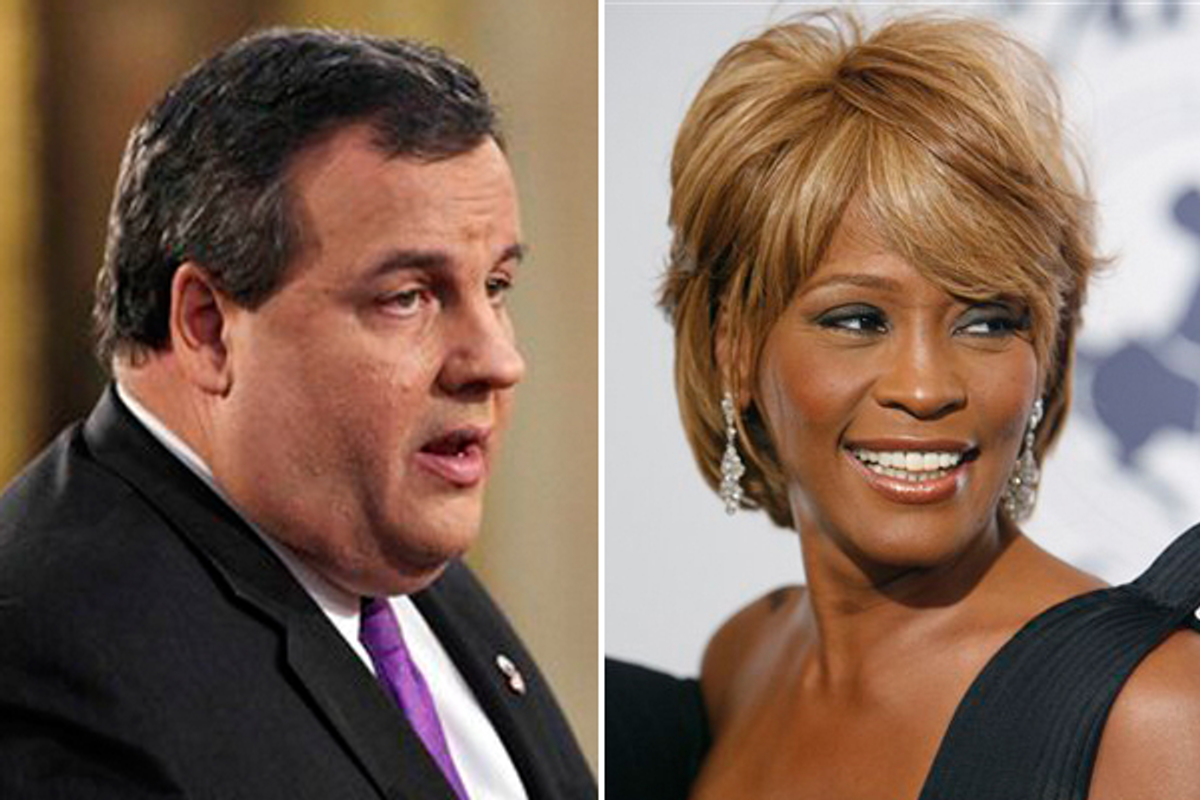 If any single political figure in America is a flesh-and-blood personification of a Rorschach test, it is Republican New Jersey Gov. Chris Christie. In almost every way, he raises vexing questions which ultimately say more about us than they do about him.

Is he, for instance, refreshingly authentic or just downright offensive? Is he regular-guy fat or too obese to be president? Is he a rare moderate Republican who is at least willing to discuss legalizing gay marriage or is he a standard GOP bigot who is deftly maneuvering to prevent such legalization?

How you answer all of these questions is a matter of political identity -- your answers all but determine where you fall on the larger political map, and in the process, highlight your assumptions about a whole host of issues.

Now, in the wake of Whitney Houston's tragic death, Christie's done it again. By ordering his state government's flags to half-staff to mourn the singer's tragic death, he has ignited a heated national debate about who should -- and who should not -- be posthumously honored by the public. In the process, his move has provided a lesson in how dog-whistle politics works -- and how the ugliest forms of bigotry still dictate so many Americans' unconscious reflexes.

Twitter was abuzz Wednesday with reaction to the decision by Christie... In online postings, there were two main arguments against the honor for the Grammy Award winner who died over the weekend in California at age 48: One was that it should be reserved for members of the military, first responders and elected officials. The other was that it’s wrong to honor a drug addict.

Heather Clause, a Richmond, Va.-based blogger who writes about teen moms and was tweeting critical comments, said in a telephone interview that she was appalled by the planned flag-lowering.

“It’s just such a bad example for people,” said 23-year-old Clause. She said the decision was like saying if someone sings well, drug use doesn’t matter and “you can still be an idol.”

In upstate New York, Rebecca Eppelmann, a newspaper copy editor, also tweeted her disgust at the Houston honor, then discussed her views.

“It should be for major events,” she said. “It’s horrible that she passed away. It’s not something that should warrant this.”

Thankfully, Christie did the right thing and proudly stood by his decision, saying “I am disturbed by people who believe that... because of her history of substance abuse that somehow she’s forfeited the good things that she did in her life -- I just reject that on a human level.” But that hasn't stopped the backlash. In response to Christie's alleged crime of honoring the dead, conservatives' Fake Outrage MachineTM has rip-corded to life, generating the usual howls of heartland outrage -- including a man who burnt a New Jersey flag in protest of Christie's order.

Of course, when singer Frank Sinatra died and New Jersey's flags were flown at half-staff, this kind of outrage was nowhere to be found -- despite the fact that Sinatra himself was a drug abuser (the drug in question being alcohol). Likewise, the outrage was nowhere to be found when Elvis Presley died of a drug overdose in 1977 and flags all over America were flown at half-staff. Indeed, as the Rockford Register Star's Chuck Sweeney notes, that event prompted an order for "all city flags in Memphis (to be) lowered to half staff"; compelled former President Richard Nixon to "ask Americans to fly their flags at half staff in honor of Elvis"; and got then-President Jimmy Carter to issue a statement saying, "With Elvis, a part of our country has died."

The answer, of course, is rooted, in part, in racist and sexist double standards.

When famous white men engage in illicit activities, American culture allows them to nonetheless retain their street cred, their wholesome image and their public honor. In some instances, in fact, the illicit behavior contributes to their mystique and their legacy -- it is seen as a cool part of who they are. This is exactly why one of the iconic images of Sinatra is him in a tux with a highball in his hand -- because a white, male-dominated culture accepts -- and even at times celebrates -- the blemishes of fellow white men.

By contrast, when famous women -- and particularly famous women of color -- engage in the same behavior, the same swath of America that celebrates the Presleys and Sinatras often reacts with indignant disgust. Hence, the backlash to Christie daring to minimally honor Houston -- a reaction that shows a white, male-dominated culture which accepts the imperfections of white males simultaneously refuses to accept the imperfections of "the other."

Importantly, such a double-standard isn't just amplified by men. In this case, some of those criticizing Christie's decision are women. But that merely shows how pervasive the double standard really is -- it's so widespread and so accepted that it's operating at a subconscious level across demographic divides.

To be sure, it's fair to raise questions about whether any entertainer deserves the same form of state-sponsored memorial as soldiers, elected officials, first responders and other public servants. Such principled and necessary queries make us contemplate a culture that overly deifies famous people, regardless of why they are famous -- and challenging that celebrity-worshiping theology is important.

However, if we are going to accept entertainers being recognized and memorialized by our civic institutions, then we ought to apply one standard. Either icons should be recognized regardless of their lifestyle choices, or they should not be recognized because of their lifestyle choices. Applying two standards to two sets of icons -- and applying those standards selectively against women and minorities -- converts solemn memorials of the dead into more ugly expressions of racism, sexism and other pathologies that still plague America.