A pro-choice win in Virginia, assisted by "Saturday Night Live" 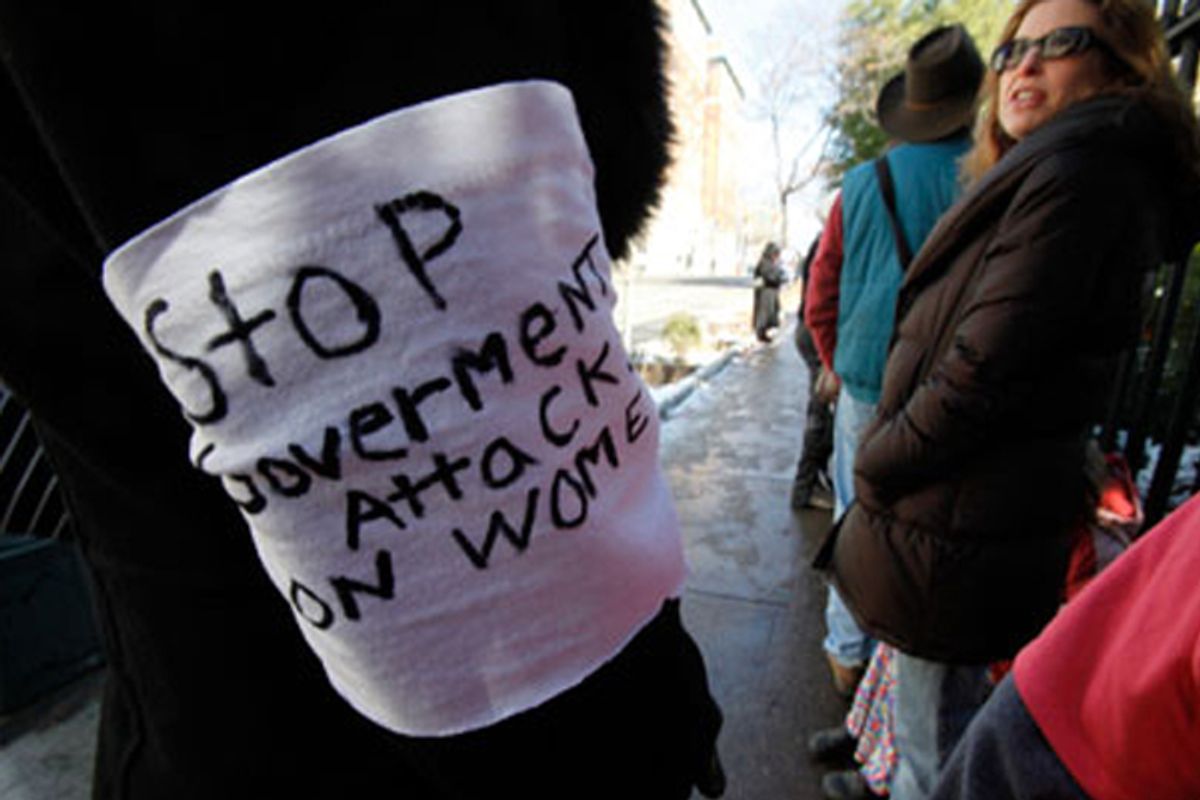 Something incredible just happened. Faced with a growing national outcry against a bill forcing an ultrasound before an abortion -- which activists and legislators had been comparing to rape -- Virginia Gov. Bob McDonnell backed off from his earlier support. "Mandating an invasive procedure in order to give informed consent is not a proper role for the state," he said in a statement today. "No person should be directed to undergo an invasive procedure by the state, without their consent, as a precondition to another medical procedure."

To be clear, the forced ultrasound battle isn't wholly won -- McDonnell's statement only went as far as "asking the General Assembly to state in this legislation that only a transabdominal, or external, ultrasound will be required to satisfy the requirements to determine gestational age." (Neither ultrasound is considered medically necessary before an abortion; transvaginal ultrasounds are considered more accurate earlier in the pregnancy, which is when most abortions occur.) But to understand what's at stake here, you have to understand that until recently, forced ultrasound bills weren't even that controversial, let alone radioactive, as today shows that they are for McDonnell, a Mitt Romney surrogate and vice-presidential hopeful.

Seven states already mandate an ultrasound before an abortion, and since the vast majority of abortions occur in the first 12 weeks, that means women are already being subjected to transvaginal wands right now. Many of those laws drew activists' ire -- and lawsuits -- but nothing like what's happened in the past week around the Virginia law. Not long ago, Mitt Romney reacted to a debate question about birth control bans as if it was the craziest thing he'd ever heard, and yet the country hasn't stopped talking about birth control ever since, for which you can thank Rick Santorum and House Republicans. But if transvaginal probes come up in tonight's debate and candidates are forced to take a position, we'll know we've truly hit a tipping point. And we can thank an extraordinary convergence of pop culture outrage and reproductive rights activists around the words "transvaginal" and "rape" for it.

According to Critical Mention, a media monitoring service, there have been 186 mentions of a variant on the word "transvaginal" this year so far -- with 132 of them in the last seven days. (There were 95 mentions in all of 2011, and we're barely two months into 2012.) Amy Poehler returned to "Saturday Night Live's" Weekend Update to use "transvaginal" as a punch line and snarl, "Don't tell me what to do!" Last night, Jon Stewart turned "transvaginal ultrasound" into a song for a "Punanny State" segment. On "The View," Joy Behar called the law "so frickin' intrusive to a woman's body" and compared it to the Taliban.

But it wasn't just traditional bigger-stage outlets of liberal outrage, though even those have rarely gotten in the state-level abortion restriction muck. There was Gizmodo, not usually up in this sort of ladybusiness, announcing, "Here Is the 'Dildonic' Device Women Seeking an Abortion in Virginia Will Have to Endure."  Said Meghan McCain to Rachel Maddow last night, "I'm pro-life but I'm not pro-vaginal probing," adding, "It scares me that a woman can be vaginally probed without her consent." She said apolitical friends had been texting her asking what was going on with the law.

Soon, emboldened legislators, who had to postpone a vote because of a silent protest of hundreds of women outside the capitol, had been pointing out that the law would require that women “submit to involuntary vaginal penetration.” One delegate, urging Republicans to back off from the bill, said today, "It seems that there are a lot of people running from this bill," adding, "Redemption is good."

It helped that Virginia is a swing state convenient to D.C. media, and that conservatives had been so openly callous about the humiliating intentions behind the law, with more than one freely conceding that if a woman had opened her legs once, why should she care if the state gets into her vaginal canal for no medical reason? And this particular state-level overreach comes after the uproar over the Susan G. Komen Foundation defunding of Planned Parenthood and the indelible images of the all-male House panel debating denial of contraception.

The difference is, this is explicitly about abortion, not ostensibly consensus issues like birth control and breast cancer screenings. What changed? Pro-choice activists and progressive media took charge of the narrative. They started calling the ultrasound probe like they saw it. Between the word "transvaginal" -- emphasizing that in most cases, this was not the "jelly-on-the-belly" kind -- and the imagery of "state-mandated rape," something finally stuck, as was clear in this AP report on the Virginia silent protest, in which one "Molly Vick of Richmond said it was her first time to take part in a protest, but the issue was too infuriating and compelling. On her lavender shirt, she wore a sticker that said 'Say No to State-Mandated Rape.' Just beneath the beltline of her blue jeans was a strip of yellow tape that read 'Private Property: Keep Out.'"

The earliest mention I could find comparing the forced ultrasound to rape was Beverly McPhail's May 7, 2011, Houston Chronicle Op-Ed, in which she declared, "Uninvited penetration is rape, whether perpetrated by a man jumping out from behind the bushes or legislating from the state capitol." McPhail, director of the University of Houston's Women's Resource Center, told me that she hadn't seen the comparison before but was partly inspired by state Rep. Carol Alvarado taking to the house floor with a transvaginal probe. Alvarado didn't talk about rape, but the discussion of penetration and the realization that this wasn't the abdominal type inspired McPhail to look up the Texas rape statute. She discovered that not only did the transvaginal ultrasound technically meet that definition, "our statute had a special provision that talked about coercion from public officials."

It didn't go far, McPhail said, but "I never quite called it 'state rape,' though, or used that term."

On Feb. 15, RH Reality Check's Andy Kopsa went there, headlining her piece, "State Sanctioned Rape," and referring to Virginia, as well as similar measures in Texas and Iowa. Kopsa said traditional women's organizations had been reluctant to make the comparison. "They are walking a thin line. Most of them have lobbyists working hard at defeating these kinds of bills every day in state houses around the country.  The fear is they will jeopardize any forward movement they have with other bills and politicians if they use the word rape." Moreover, feminists, who use slogans like "rape is rape" and critique the use of the word in everything from right-wing commentary to comedy bits, are understandably wary of the word in a new context, even when a literal vaginal penetration is involved.

But some of the women's groups are happy to have others make the comparison for them, Kopsa says: "When I spoke to one women's group in Virginia, the representative was almost giddy that I was writing an article that had 'rape' in the title about her state's horrible bill." By the next day, Slate's Dahlia Lithwick wrote in a widely circulated story on the Virginia bill, "I am not the first person to note that under any other set of facts, that would constitute rape." Soon, not only were progressive journalists comparing the procedure in the bill to rape -- legislators in Virginia were.

"We are often caught behind in defining the debate," says RH Reality Check editor in chief Jodi Jacobson, Kopsa's editor on the piece who made a conscious effort to reframe the narrative. "Three years ago we should have had national conversations about birth control as a health consideration. now we're playing catchup to religious freedom. This happens over and over again, when the framing is behind the politics."

It's as true in abortion debates as anywhere else. Andrea Grimes, a Texas feminist blogger and journalist, says, "I made the decision to refer to the legislation as a forced transvaginal ultrasound bill as a political response to the sponsors' repeated insistence of calling it an 'informed consent' bill." That's the preferred language of proponents of such laws, as if a woman isn't already informed of what pregnancy means.

As to why Virginia could be different than Texas, where the law is being contested in court but is already being enforced,  Grimes said, "In my experience as a Texas feminist, even progressive people just kind of expect that Texas is shitty and backwards and oh well, that's just what happens there with those poor, ignorant Red Staters so what can you do? But now we're seeing that Texas ... isn't just the ignorant, backwoods exception to the rule -- it's the inspiration for an increasingly well-organized push to take rights away from women nationwide."

And Jacobson says, "There's just this confluence of factors where people are beginning to wake up to what's going on. Part of it is that people are aware that it's not just a culture war -- it's a war on women, evidence, health, and science."