An insider's guide to the great manufacturing debate

Two economic visions compete for the future of the American economy 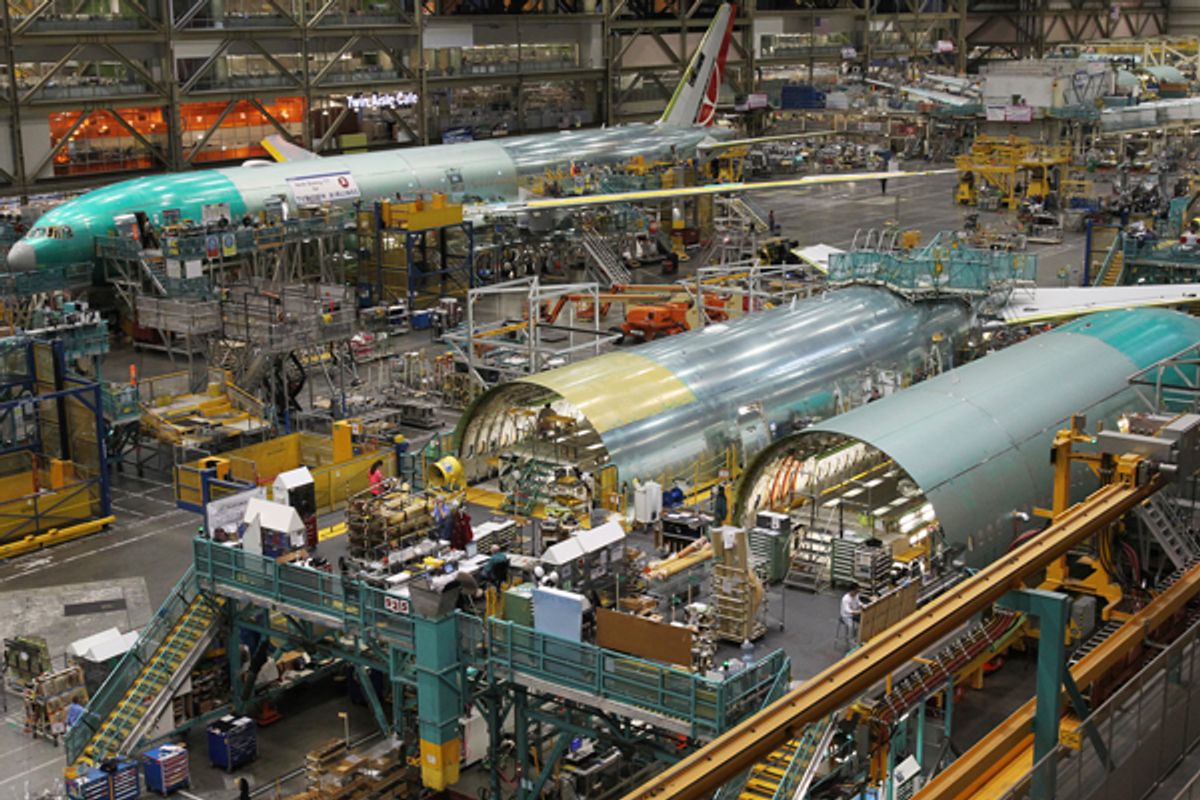 Manufacturing is back in the news.  The combination of Obama administration initiatives to help American manufacturing with criticism of China’s unfair trade and industrial policies by candidates for the Republican presidential nomination has produced a bipartisan backlash by prominent academic economists including Christine Romer, a Democrat and a former Obama economic adviser, in the New York Times., and Michael Boskin, a Republican and adviser to the first President Bush.

Romer and Boskin agree that government should do nothing to save or promote the manufacturing sector in the United States.  Their critiques of industrial policy, in turn, have produced responses by prominent advocates of federal aid for technological innovation and manufacturing, including Clyde Prestowitz, a former Reagan administration official and founder of the Economic Strategy Institute.

This debate is not a contest between “free trade” and “protectionism.”  It is between dogmatists who argue that free trade and government indifference to industry are the best policies for all countries, at all levels of economic development, at all times, and pragmatists who argue that free trade, strategic trade or protectionism may make sense for one country rather than another—or for the same country, in different historical periods.

Nor is the debate between left and right.  As we see today, it often pits liberal and conservative policymakers and voters against academic economists, who on this issue, whether they are Democrats or Republicans, tend to take what in politics is the view of trade held only by the libertarian lunatic fringe.

Versions of this “industrial policy debate,” featuring many of the same players, have taken place every decade since the 1970s.   It is never resolved, because the two sides are talking past each other.  They do not agree on basic theory, basic facts, or even the basic rationales for the trade and manufacturing policies in dispute.

Basic theory.  Mainstream academic economists like Romer and Boskin base their views of trade, not on the study of economic history or the actual policies of contemporary industrial countries, but on the theories of Adam Smith (absolute advantage) and David Ricardo (comparative advantage), dressed up in recent generations in seemingly-impressive but superficial mathematics.  Despite their differences, the theories of absolute and comparative advantage assume that, in a technologically-static world, global economic efficiency, defined as the lowest prices for consumers, can be maximized if all countries, as well as firms and individuals, specialize in particular lines of production.

In contrast, proponents of industrial policy and other government aid to manufacturing base their views on the actual history of the world since the late 1800s and early 1900s, after Smith and Ricardo wrote.  The four greatest economic powers in today’s world—the U.S., China, Japan and Germany—all became leading countries by ignoring the unrealistic theories of Smith and Ricardo and fostering selected national industries by some combination of tariffs, nontariff barriers, subsidies, public or publicly-funded R&D and credit policies favorable to manufacturing.  If market fundamentalists were correct, these countries should be economic basket cases, instead of the world’s leading manufacturing powers.  Even Japan, despite the aftermath of its real estate and stock bubble, remains a leader in many high-value-added industries.

Most growth in the last two centuries has resulted, not from the specialization of countries in one or a few sectors, but from the substitution of machinery powered by mineral energy for human and animal muscle power and the energy generated by wind, water and biomass.  The unwise nations that followed the advice of Smith and Ricardo and specialized according to their preindustrial absolute or comparative advantages have been backward, non-industrialized, one-crop “banana republics” like those of Central America.

Basic history.  Unable to agree on theory, the two sides in the trade and industrial policy debate also cannot even agree on basic historical facts.

The fact that all of the successful industrial countries of modern times have used industrial policies, including the U.S. and Britain, in spite of their free market rhetoric, poses a problem for market fundamentalists who claim, in the face of two centuries of evidence, that government support for manufacturing is doomed to fail or backfire.  To deal with this issue, American critics of industrial policy present a highly selective and badly-distorted vision of history in their op-eds and articles on the subject.

Frequently they cite a single 1888 study, "The Tariff History of the United States, "by a single ardent proponent of free trade, Frank Taussig, as proof that infant industry tariffs were not needed by the U.S. in the nineteenth century U.S. (Even if this were true, and it is not, it would not address the historical success of tariff and nontariff policies in Germany and Japan and China, the other leading industrial countries of today).

These writers then cherry-pick a few examples of failed U.S. federal industrial policies from the Carter administration to the present--Synfuels, HDTV, Solyndra—while ignoring the successes—the nineteenth century “arsenal system” of military-supported manufacturing, the federal government’s sponsorship of the domestic radio and aviation industries, the Pentagon’s role in the development of nuclear energy, computers, the Internet, rockets and satellites.  As Michael Shellenberger and Ted Nordhaus of the Breakthrough Institute have shown, the revolutionary innovations in hydraulic fracturing (fracking) behind the shale gas revolution resulted from the very kind of government industrial policy which, according to Boskin and Romer, is likely to fail.

You are unlikely to find any acknowledgment of these world-transforming successes of American state capitalism and industrial policy in the writings of Romer, Boskin, Jagdish Bhagwati and other conventional economists who, like Larry Summers, argue that “the government is a crappy venture capitalist.”

The critics of manufacturing policy sometimes claim that the collapse of the Japanese bubble economy in the 1990s proves that Japan’s industrial policies were a failure.  But Japanese industrial policy remains a great success.  Today Japan contributes more high-value added components to Apple’s Iphone than the U.S., where it was invented, or China, where it is assembled.

Like the U.S. economy in the 2000s, the Japanese economy suffered from the bursting of a real estate and stock market bubble.  It is true that an excess of government-directed credit to infrastructure and manufacturing for export contributed to Japan’s financial crisis, as it more recently has contributed to China’s real estate bubble and banking problems.  But the U.S. managed to have similar stock and real estate bubbles, followed by similar stagnation, without pursuing similar industrial policies—indeed, after decades of tolerating huge trade deficits and offshoring.

There is indeed a compelling critique of Chinese, Japanese, and German industrial policies, but it is not the market fundamentalist claim that those policies failed to nurture flourishing and dynamic Chinese, Japanese and German industries.  Rather, it is the Keynesian argument that they have over-invested in industry in misguided pursuit of chronic trade surpluses.  In industrial policy, as in life in general, too much of a good thing can kill you.  In the case of countries with chronic manufacturing trade deficits like the U.S., too little of a good thing can kill you, too.

(Coming next week; The debate over rationales for manufacturing policy)