Thanks, Rick Santorum! No, really 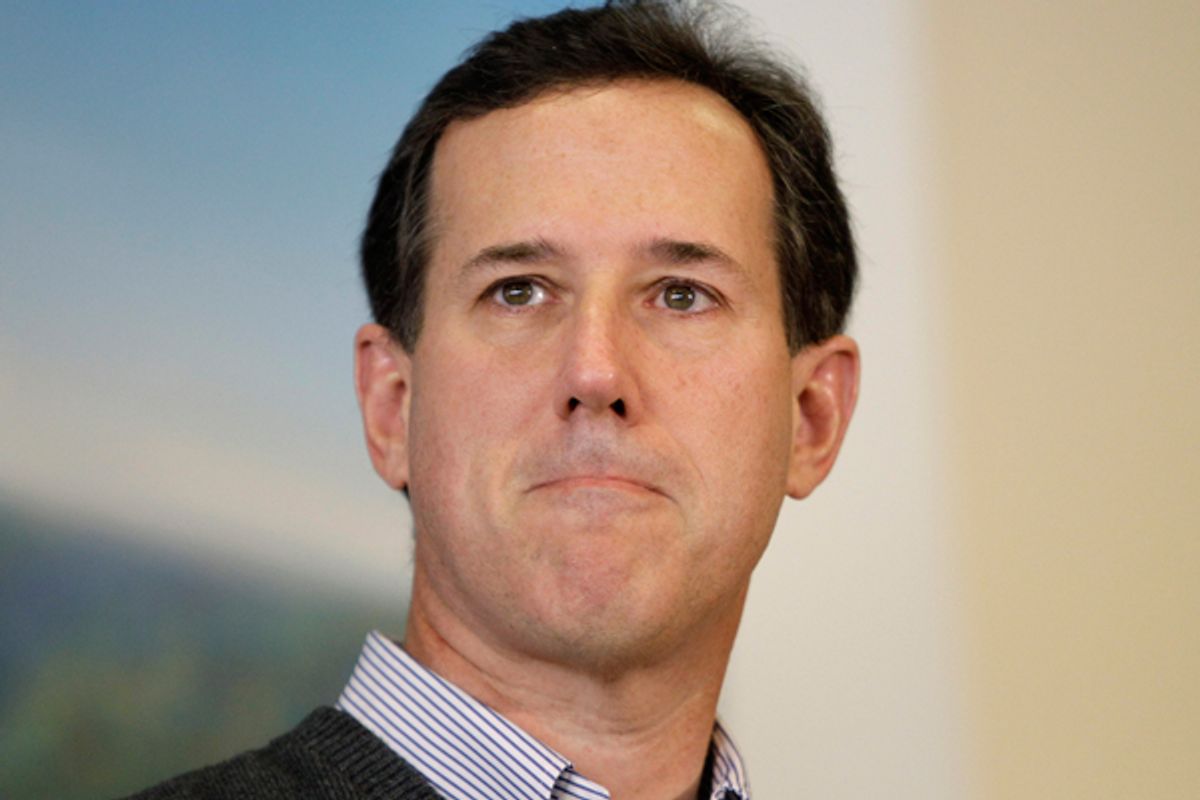 OK, it's true: Rick Santorum didn't sponsor Virginia legislation to require that women seeking abortion undergo an ultrasound – and in cases of very early pregnancy, when a fetus is hard to see, a creepy and intrusive transvaginal ultrasound. But seven states have already passed ultrasound requirements for women seeking abortion. The Virginia bill is galvanizing opposition nationally at least partly due to the climate of crazy that's been fomented by Santorum's backward candidacy.

The man who calls contraception "a license to do things in a sexual realm that is counter to how things are supposed to be" went from being a failed Pennsylvania senator, Mr. "Man on Dog," to GOP presidential front-runner over the last month. Now he's crusading against prenatal testing because he claims it encourages abortion (when in fact most prenatal testing helps women help babies who develop in utero health issues) and claiming President Obama's policies will ultimately send Christians to the guillotine. (By the way, I apologize for harping on the way Protestants have persecuted Catholics in the U.S., because Santorum reminded me of some of the reason why, with his charge that mainline Protestant churches are a Satan-sponsored "shambles" that are "gone from the world of Christianity as I see it.") He and Mitt Romney, who's trying to match him outrage for outrage, have been chasing women voters away from the GOP in droves over the last couple of months.

Into that polarizing political climate came the news that Virginia Republicans want to go where no politician of any stripe belongs: up the vaginal canal and into the uteruses of pregnant women who are seeking an abortion. The bill already passed the state Senate, and clearing the House of Delegates seemed a mere formality, especially given that Alabama, Arizona, Florida, Kansas, Louisiana, Mississippi and Texas already have ultrasound requirements. A mere formality, that is, until people began paying attention.

Now, for two days straight, the Virginia House of Delegates has postponed its vote on the bill. More than a thousand protesters lined walkways to the state Capitol to silently protest the bill on Monday, and their powerful statement seemed to still resonate on Tuesday. The bill is expected to pass eventually, but with every day, the national backlash against the measure helps its opponents' chances. On MSNBC's "Politics Nation" Tuesday Virginia delegate Kaye Kory urged the media to keep paying attention. Gov. Bob McDonnell, who supports the bill, is often mentioned as a GOP vice presidential nominee, and his office has emitted a few warning signs of alarm over the last couple of days. As far right as Republicans have lurched, it can't be helpful for McDonnell to find his Virginia GOP accused of supporting state-sanctioned rape for forcing unwilling women to submit to vaginal penetration in order to exercise their legal right to an abortion.

Of course, the Virginia GOP still has its fervent defenders. CNN commentator Dana Loesch outdid herself (and that takes a lot) by suggesting that women had implicitly consented to such a procedure when they consented to vaginal penetration during sex. Wait. Let me make sure I'm not misinterpreting her. Here's what she said: "Progressives are trying to say, that it's rape and so on and so forth ... They had no problem having similar to a trans-vaginal procedure when they engaged in the act that resulted in their pregnancy." If that sounds like crazy talk – and it is -- a Virginia Republican who supports the procedure said much the same thing, telling a Democratic colleague that women had already consented to being "vaginally penetrated when they got pregnant," according to Slate's Dahlia Lithwick. I hope Virginia Republican women will ask their male partners whether they believe consenting to sex represents consenting to state-sponsored vaginal penetration as well. I know, it might be a mood-killer, but it's a good thing to find out.

As Steve Kornacki observed this morning, Santorum may be compromising his own political future almost as much as he's compromising women's rights with his increasingly crackpot declarations. He's also helping Virginians who oppose their state GOP's extremism to get attention to their cause, while the Virginia GOP helps national Democrats sound alarms about Santorum's lunacy.  It's a win-win for proponents of women's freedom. I keep pinching myself to make sure it's not a political trick.

I talked about the GOP's war on women's rights with Virginia delegate Kaye Kory on MSNBC's "Politics Nation":